Season:   mid-Autumn and, supposedly, the end of the 'wet' season

Well there's nothing much to report about my gardening efforts over the last couple of weeks.  The end of March concluded another significant weather event for us ... it was the wettest March ever in the history of our weather records.  During March our area received 655 mm of rain ... that's around 26 inches!  Now that's the way to herald the supposed end of the 'wet' season. 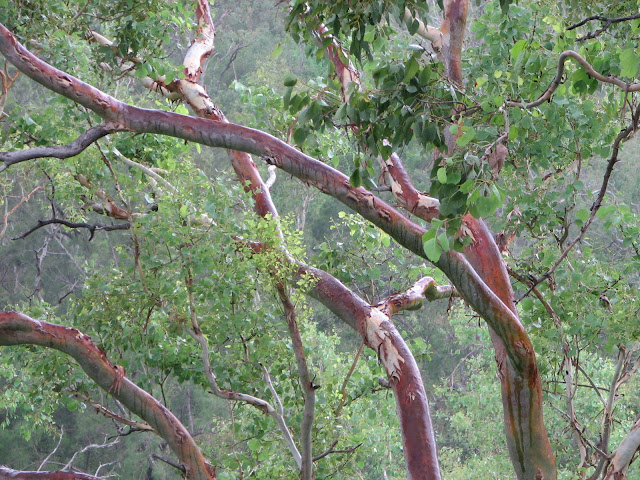 Gum trees in the rain.

Despite the fact that April is usually the start of our 'dry' season, Mother Nature hasn't quite finished with our rainfall records!  It only took two days to exceed the average April rainfall total!  This has been a record-breaking year in terms of weather events ... the highest ever rated cyclone, the highest ever beginning of Autumn rainfall total and it looks like we're going to break the record for the number of overcast days in the first half of the year! 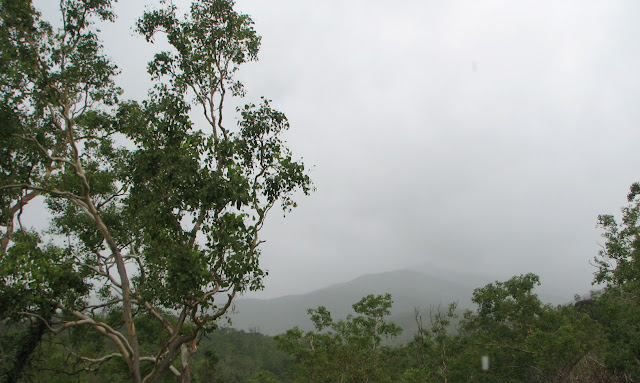 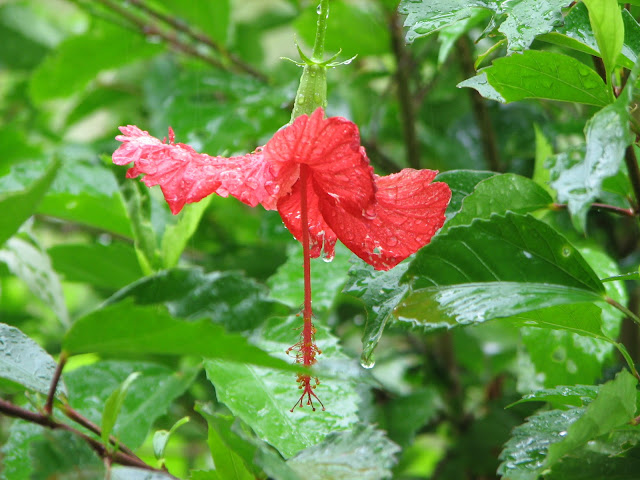 So, there's not been a whole lot of gardening work done.  The only chores I've managed lately are the fertilising of the potted plants and the outdoor tiered garden bed, and cleaning up/trimming back in the shadehouse.  Most garden areas are looking after themselves.  So for my report today I thought I would just take a walk in the rain ... umbrella in hand ... and take a few shots of what's going on around the place.

Out in the Courtyard Garden ... 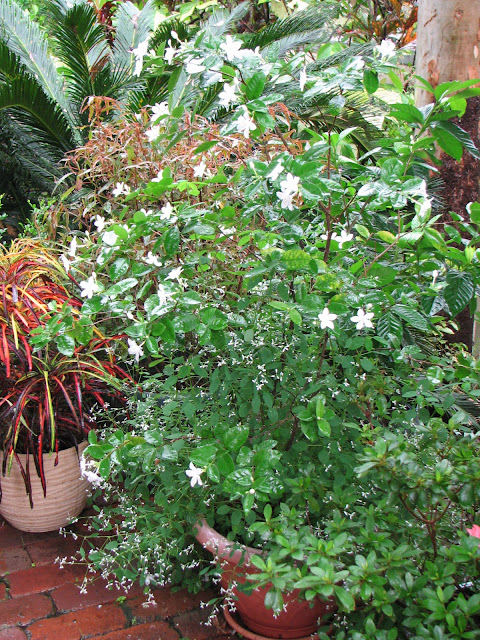 The Wrightia is maturing very nicely and this is the most flowers it's showed since it was established early last year. 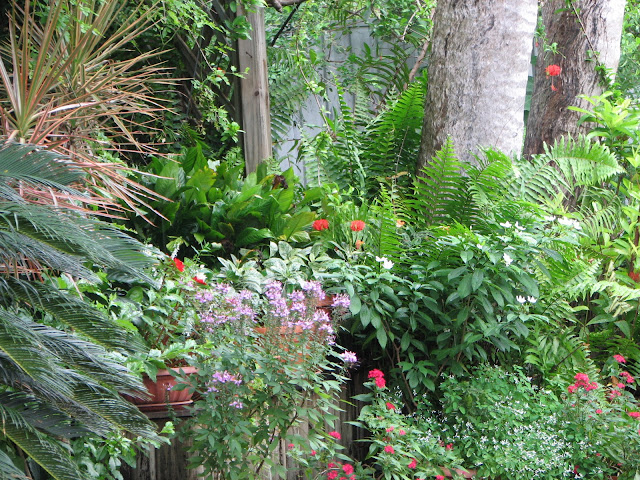 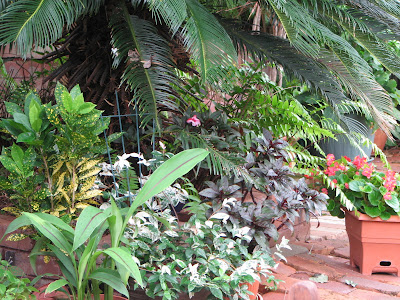 Where is that sunshine?  We seek it here, we seek it there ... but it's simply nowhere! 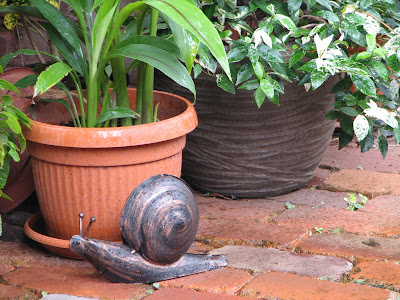 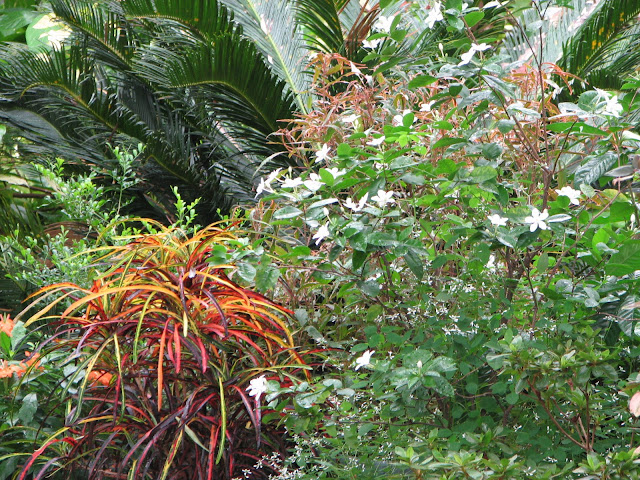 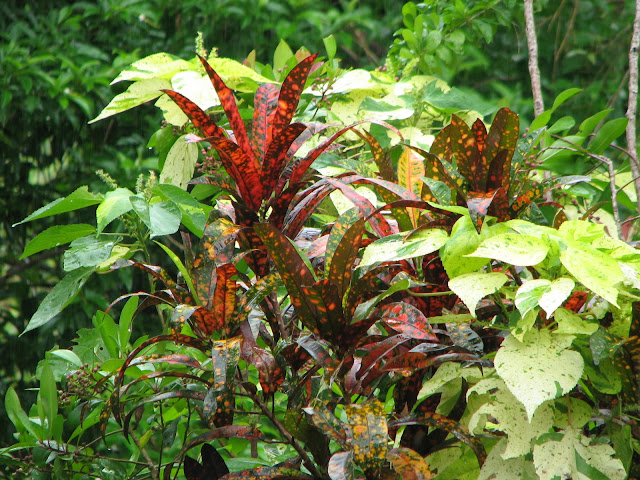 Down the Driveway Garden ...  some things are looking good despite the thrashing dealt out by Cyclone Yasi ... 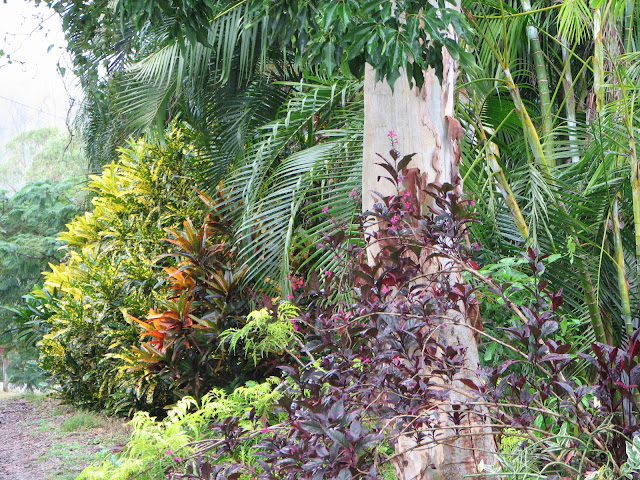 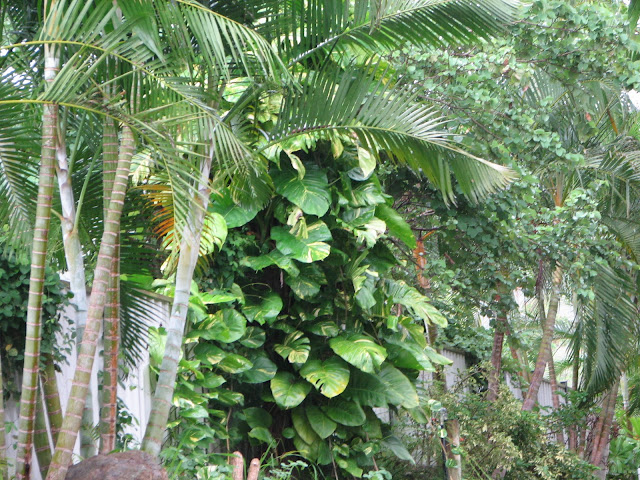 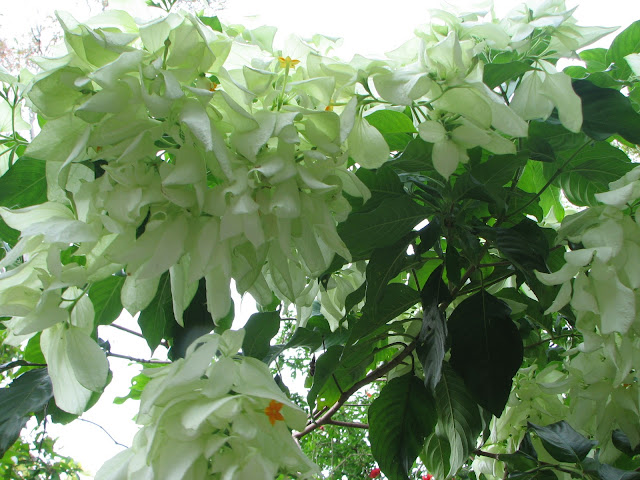 like the Crotons, Dypsis lutescens or Golden Cane Palms, Epipremnum aureum or Pothos and Mussaenda philippica 'Aurore'.  They have come through the cyclonic winds and constant rain perfectly well. 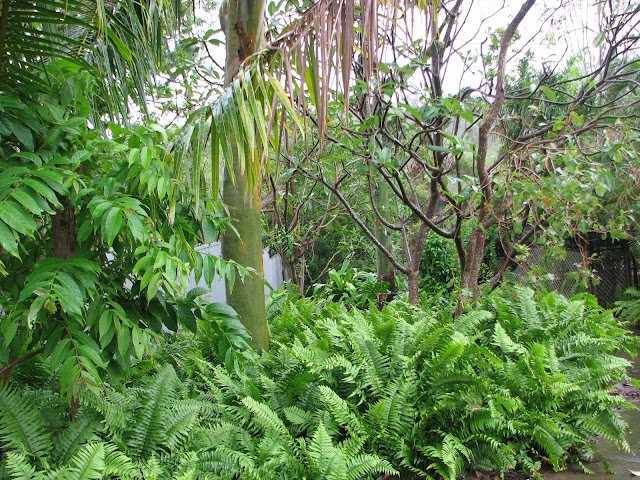 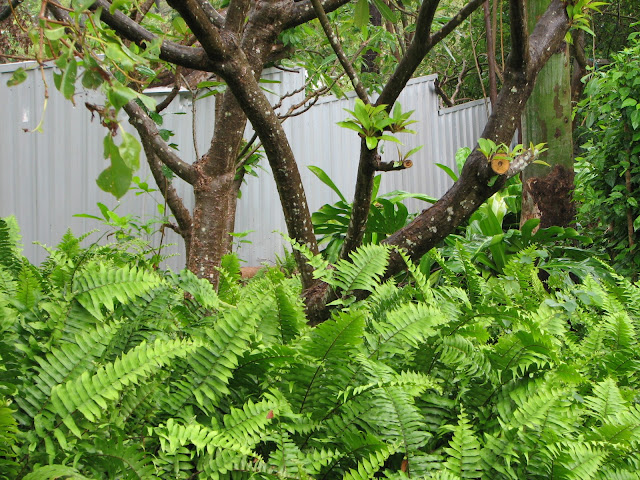 Some things are recovering nicely after being damaged by Yasi's winds ... Lagerstroemia speciosa, Nephrolepis biserrata and Plumeria rubra have all bounced back brilliantly.


In the outdoor Tiered Garden Bed ... some of the plants are starting to flourish a little at long last.  Ever since the Duranta repens, which previously shaded the area, was significantly damaged by the cyclone and then cut right back, many of the plants have suddenly grown well.  They seem to like the lack of sunshine and the rain. 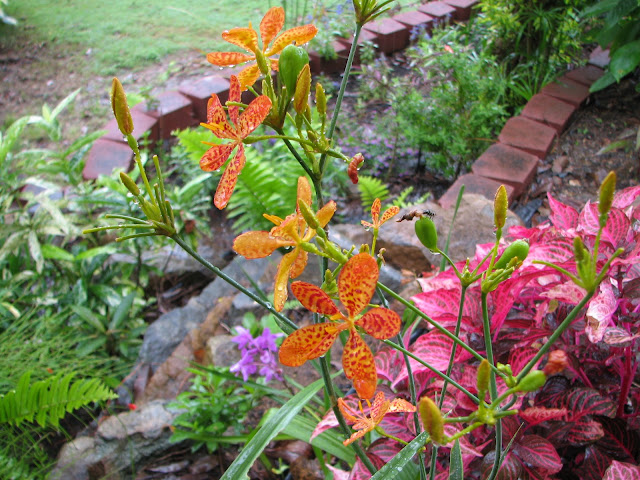 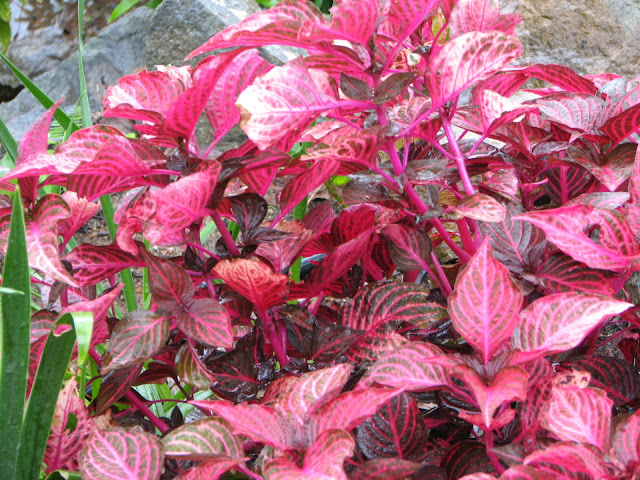 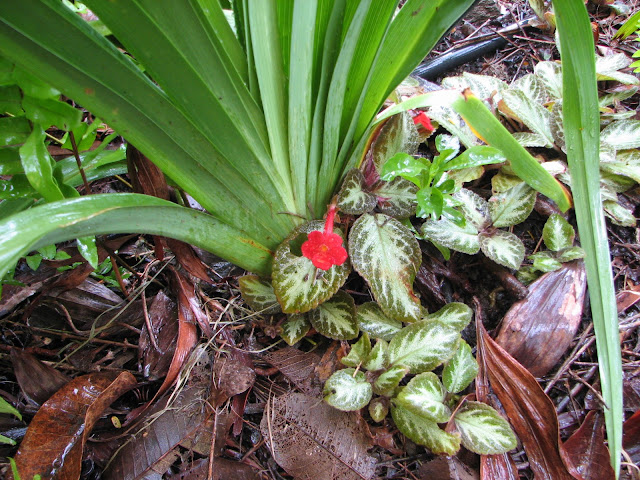 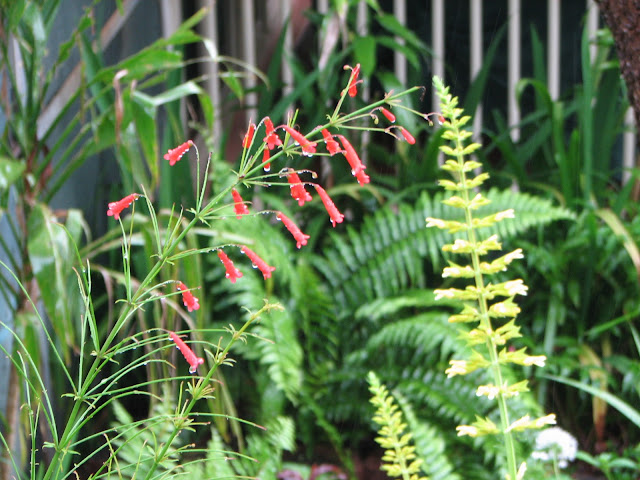 
In the Shadehouse Garden ...  I have managed to do a little bit of cleaning up.  It's looking less like an overgrown jungle and more like a lush tropical paradise.  All the plants in here are relishing the conditions. 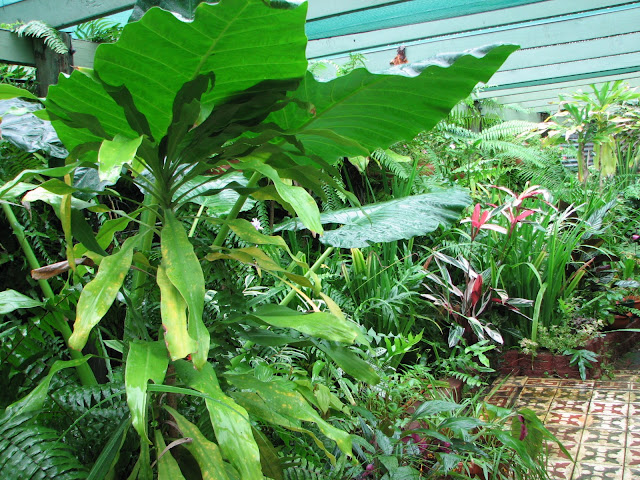 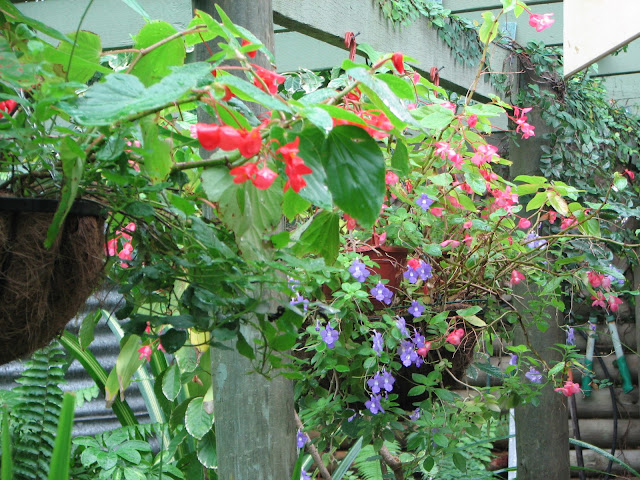 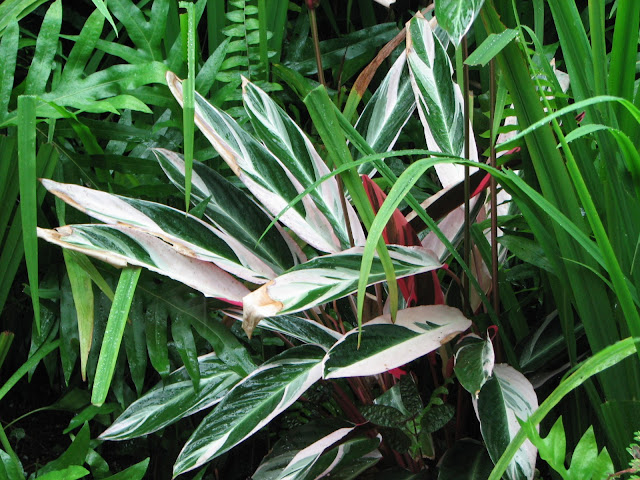 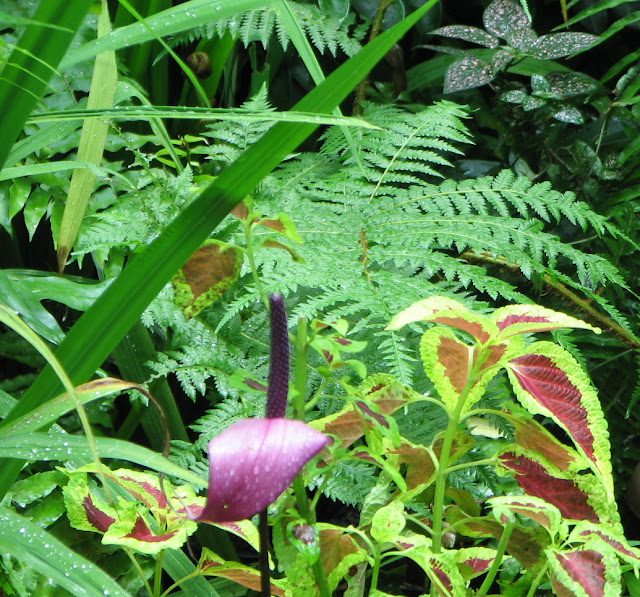 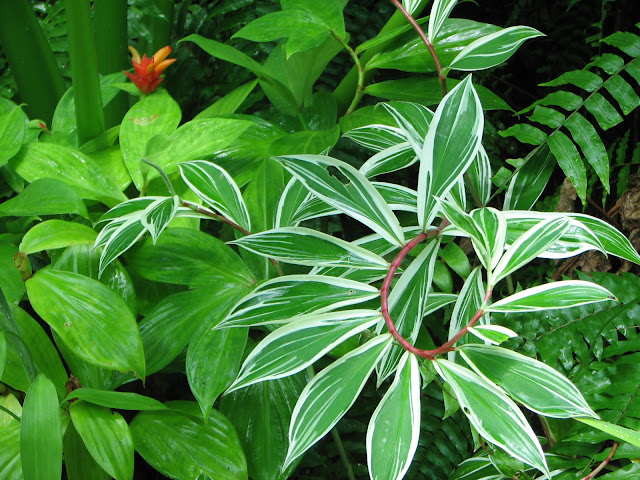 So it's a raindrop-covered garden all around me at the moment.  Here's a quick view out onto the courtyard as the liquid sunshine gently falls.