Snapshots of Mid-Autumn on this April Garden Bloggers' Bloom Day, 2013 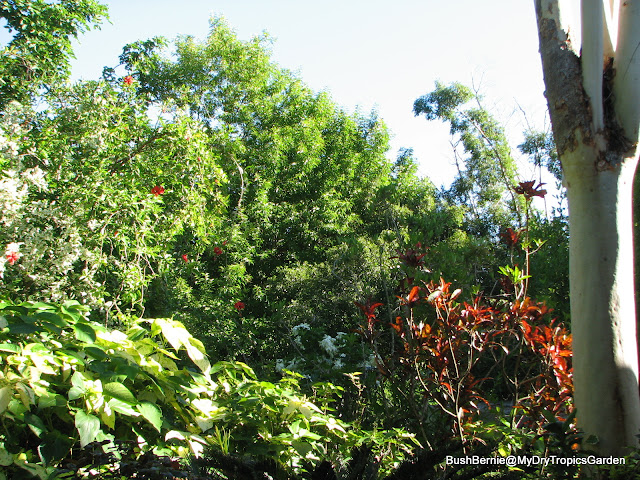 I know I'm a little late for GBBD, but better late than never.  It's been such a long time since I last posted on here anyway, that I felt I should make the effort, even if the due date for joining Garden Bloggers' Bloom Day has passed.   Work life, home life and family life are always priorities over blogging, and those areas of my life have been so very, very busy over the last couple of months.  The garden has suffered somewhat as a consequence, with the more favoured areas, the courtyard and shadehouse gardens, receiving very little attention; and the other garden spaces being left to fend for themselves. 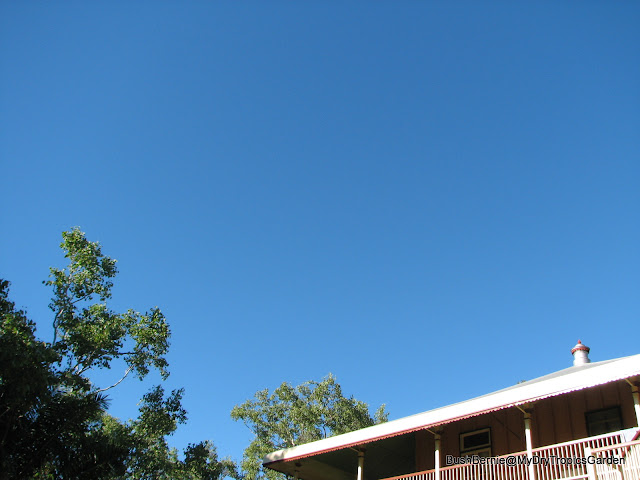 We've had mostly fine blue-sky days so far this month.  Our dry season more or less begins with the start of our mid-Autumn month of April, so our skies tend to be clear and bright blue.  We did have two days of quite decent rain which totalled around 43 mms (almost 2 inches).  As the wet season had been a big disappointment, it seemed like a rather cruel joke that right at the end of the wet, we get a reminder of what decent rain is like!!!

So far this year our rainfall total has reached only about 516 mms ( 20 inches), which is less than half the total reached by the same time last year.  It's meant that our wet season has been remarkably dry this year, which is not good news for a garden that's about to suffer through a long nine-month dry season.  I think it's going to be tough going for some of the younger plants that have only been planted out in the last two to three years.

Anyway, let's take a wander around and see just what's going on this mid-April.

Starting with the trees on the property ... what's blooming?

The answer is short and sweet.  Very little! 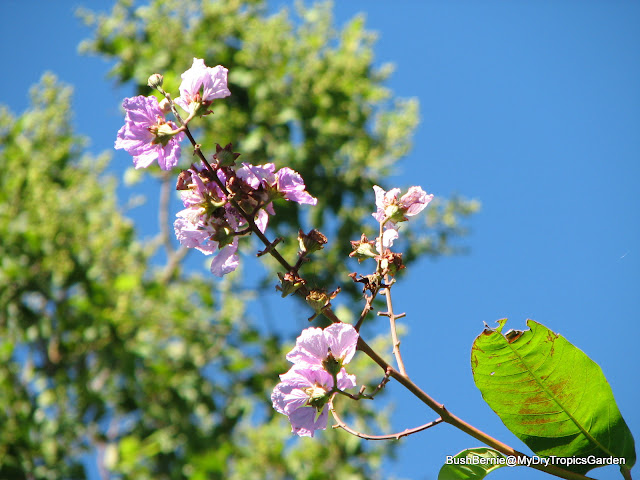 The only other tree blooms to be spotted were those on a couple of the native trees around here. 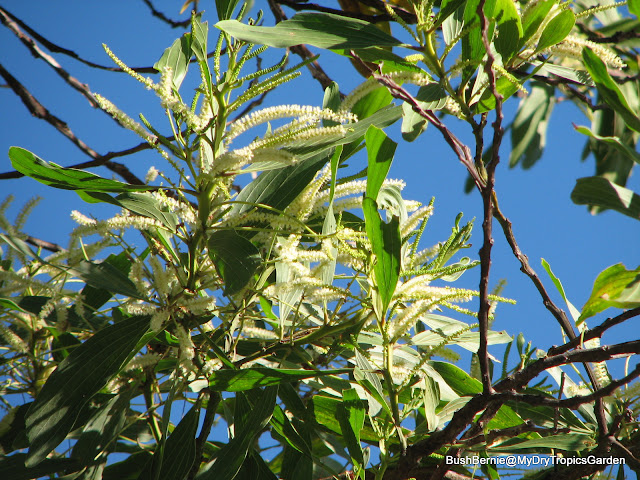 There is one Acacia mangium growing near our shadehouse, and it's covered in lovely lemon flowers. 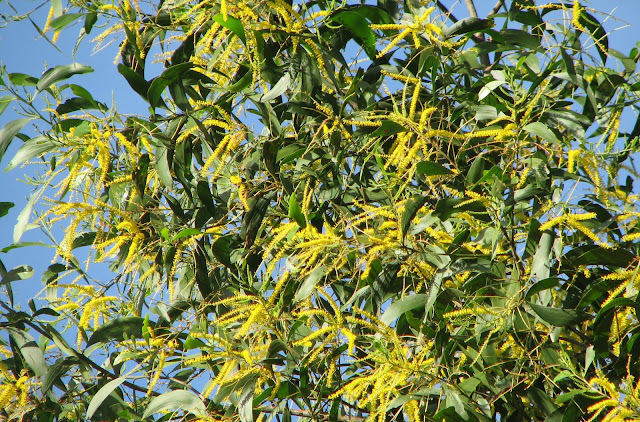 There are also blooms on the Acacia leptostachya trees, out in the bushland.  Luckily there's a rather large tree growing very close to one of our fences and the flower-laden branches are hanging out over the fence onto our property.  It's a lovely sight.

April last year, I remember there were still blooms on the Tabebuia heterophylla and Citharexylum spinosum on the property, and there were loads of flowers on the Melaleucas out in the bushland.  There are no flowers to be seen on any of these this April.

Onto the shrubs ... what's blooming?

There are a few more blooms to be spotted on the various shrubs around my place.   Of course, there are always flowers showing off on the various red-flowering Hibiscus scattered in the far corners of the garden. 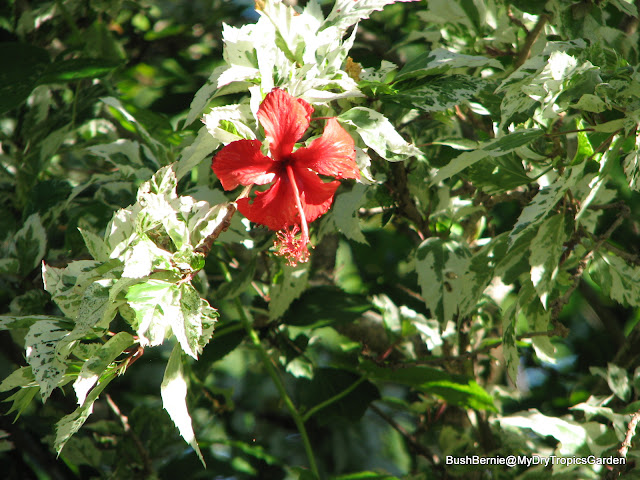 Hibiscus rosa-sinensis 'Snowflake' at the back of the courtyard, 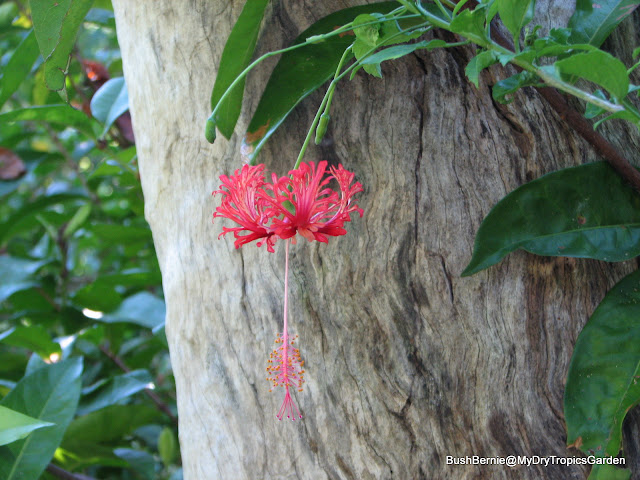 Hibiscus schizopetalus near the pergola, 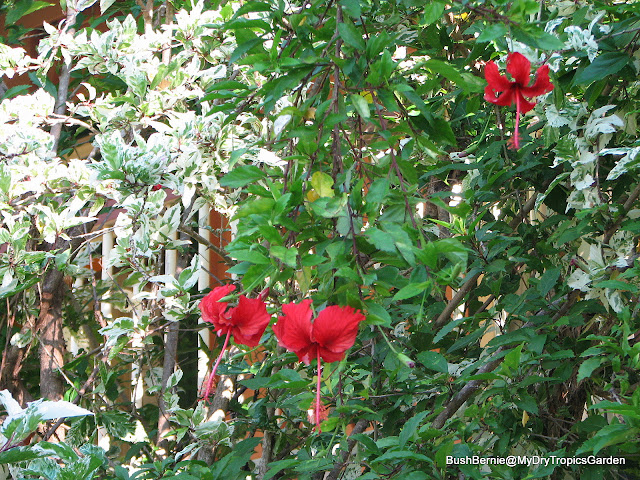 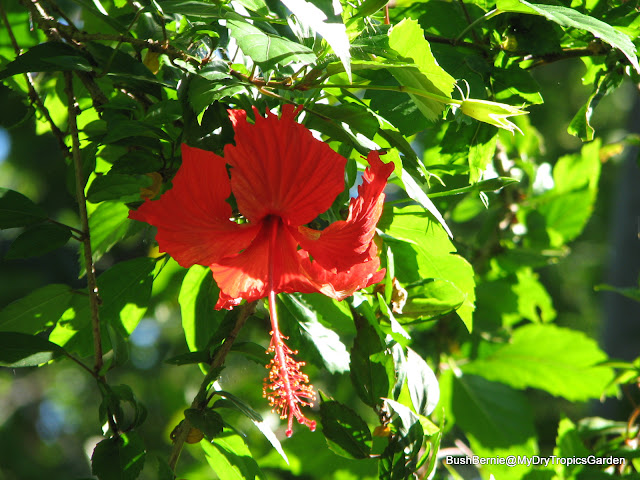 and Hibiscus rosa-sinensis in the hillside driveway garden bed. 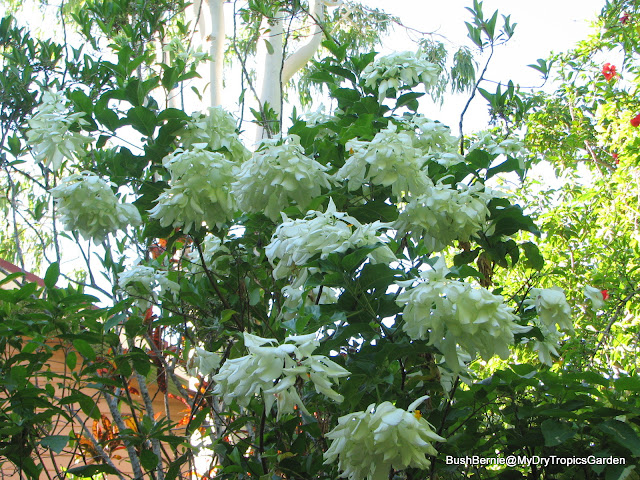 The Mussaenda philippica 'Aurore' growing down at the end of the hillside driveway is covered in white bracts and little yellow flowers. 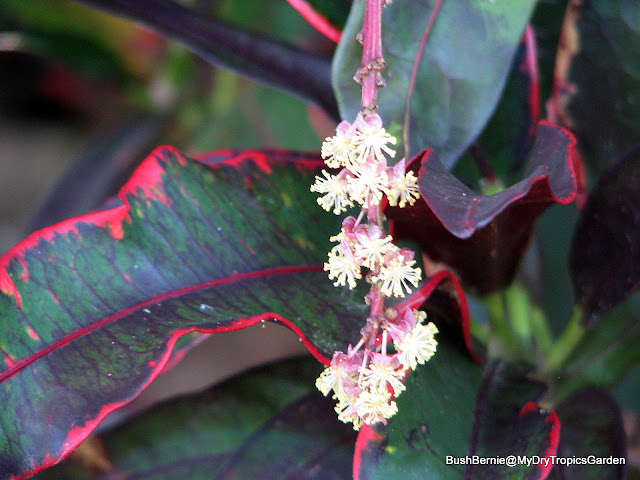 Down the gravel driveway there are flowers on some of the Crotons, 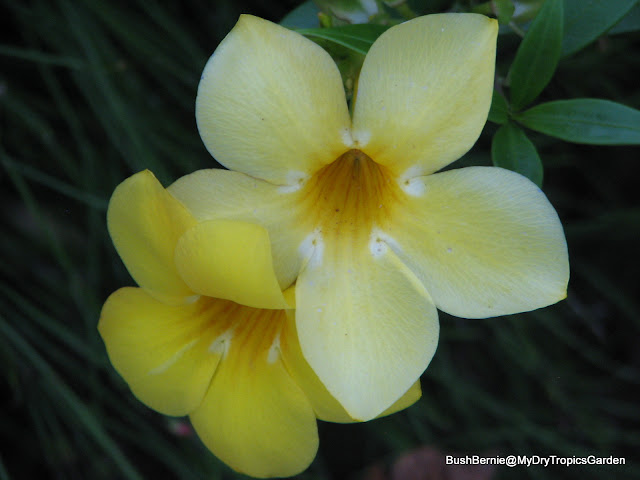 and out in one of the front-of-house garden beds the Allamanda cathartica 'Sunee' is still showing a few of its bright yellow flowers.

Now, out in the potted courtyard garden ... what's blooming? 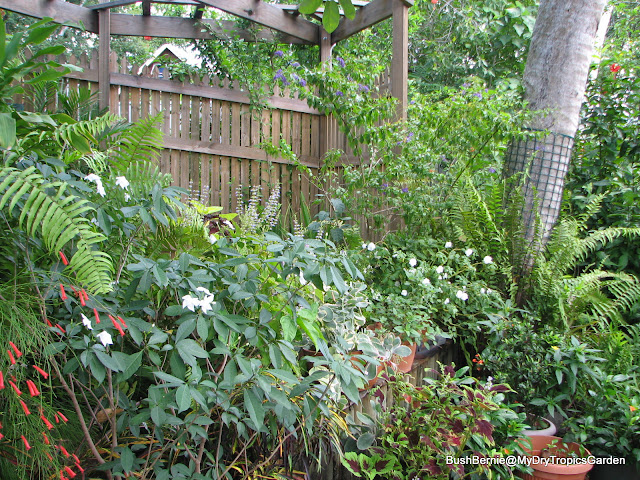 Again, not much, as I cut back most of the potted plants out there a couple of weeks ago now, and they're still filling out. 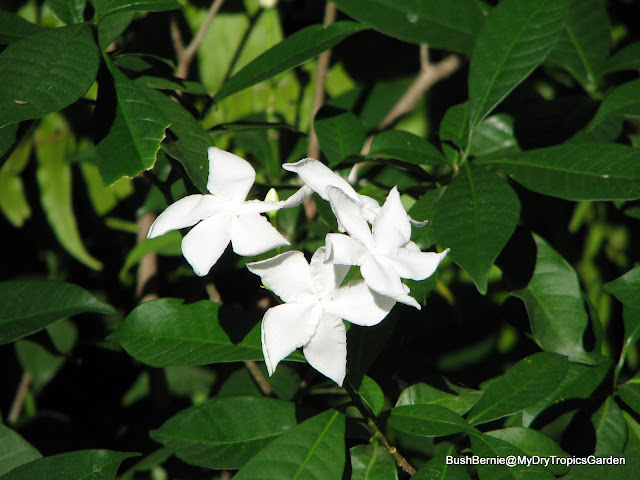 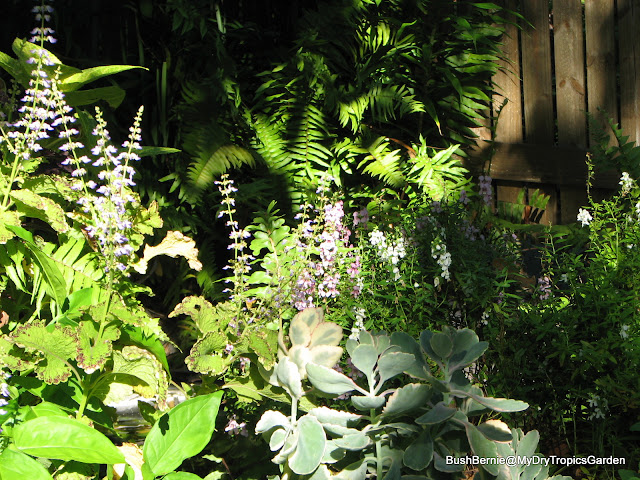 There are flower spikes on the Coleus and the Angelonia angustifolias. 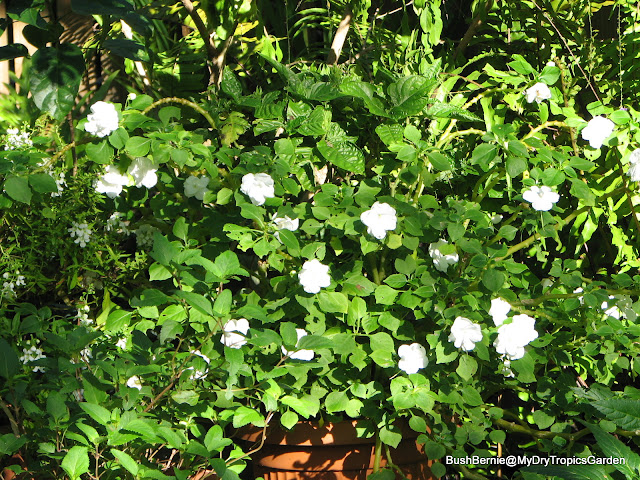 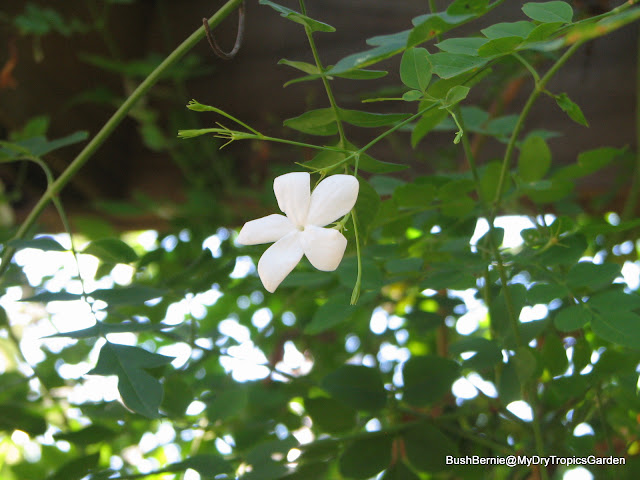 The climbing Jasmine officinale is still flowering and filling the air with a soft, sweet perfume. 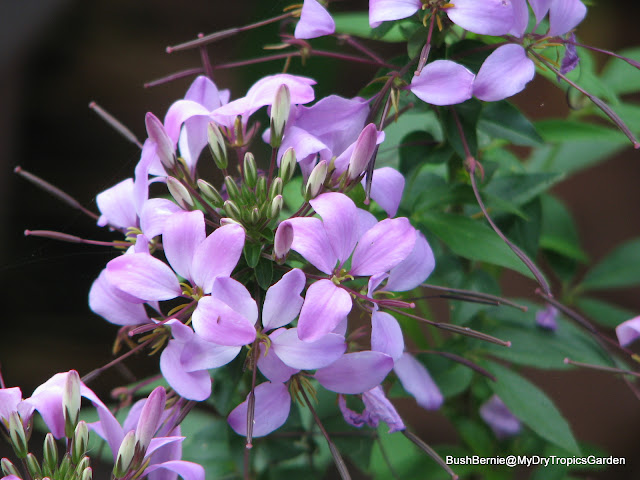 There are a few flowerheads on the Cleome 'Senorita Rosalita', 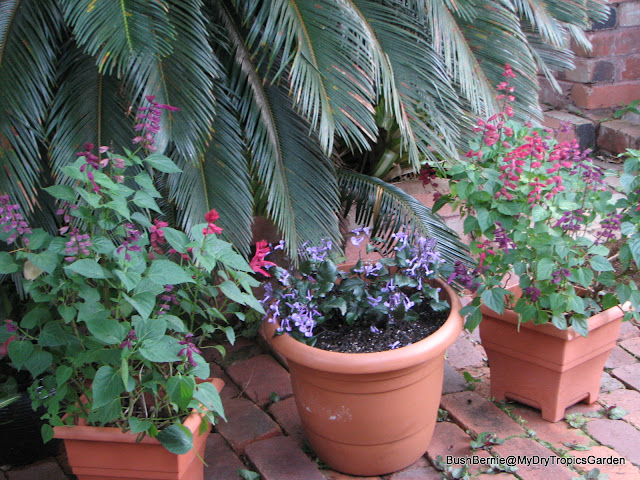 and the Salvia splendens 'Vista Mix' and Plectranthus 'Mona Lavender' are all starting to fill out and bloom once more after their cut back.

Onto the shadehouse garden ... what's blooming? 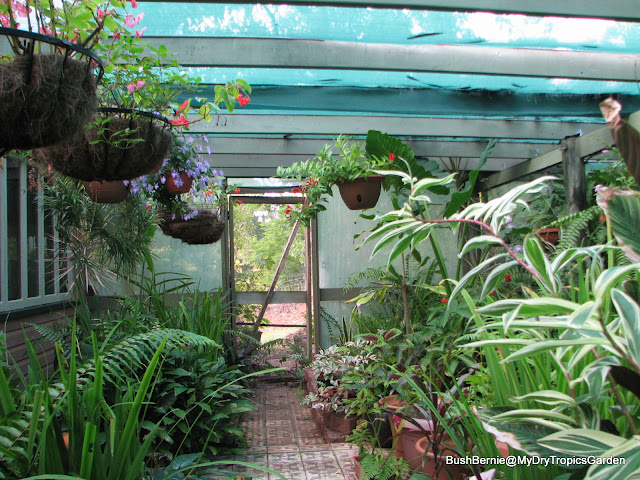 Once more the answer is pretty short and simple ... not much. 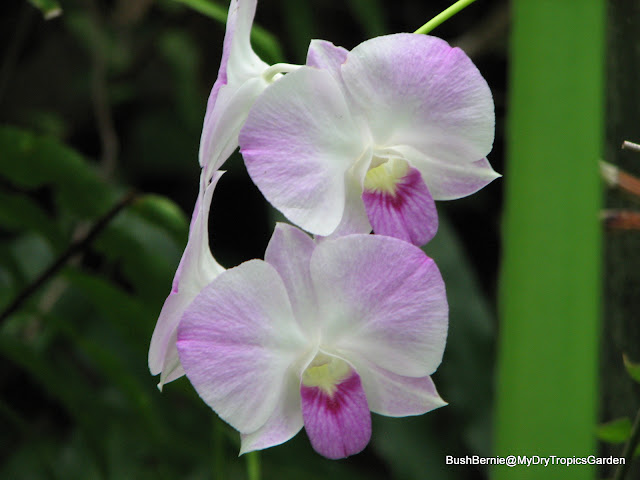 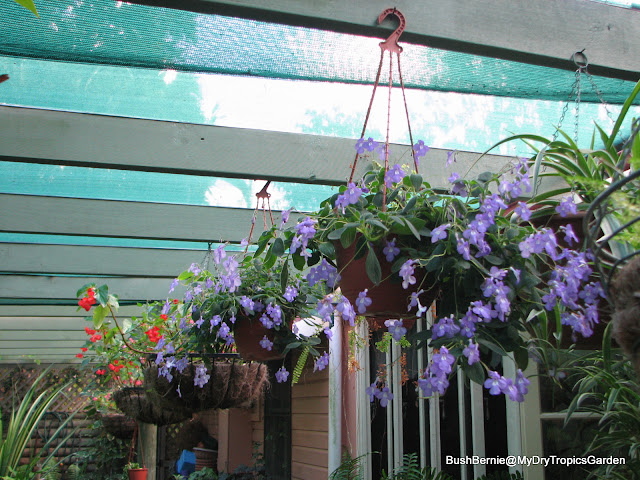 and the Streptocarpus caulescens is putting on a great show. 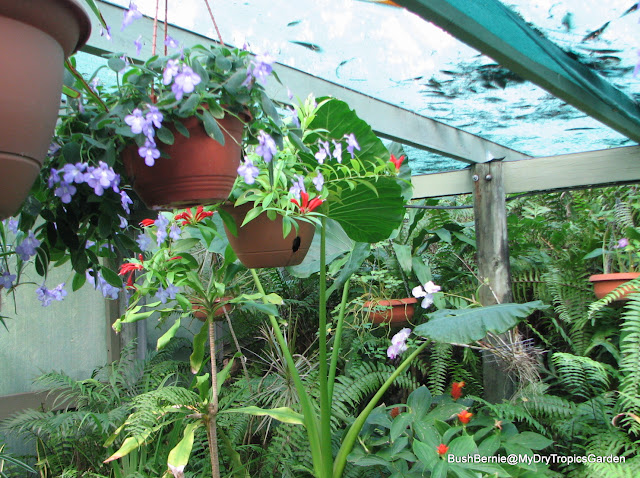 The Aeschynanthus lobbianus and Costus productus also add a touch of red, 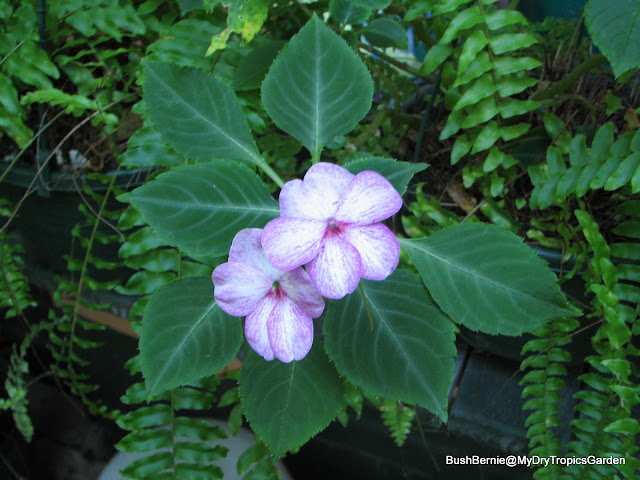 and there are a few Impatiens walleriana flowers to be seen here and there. 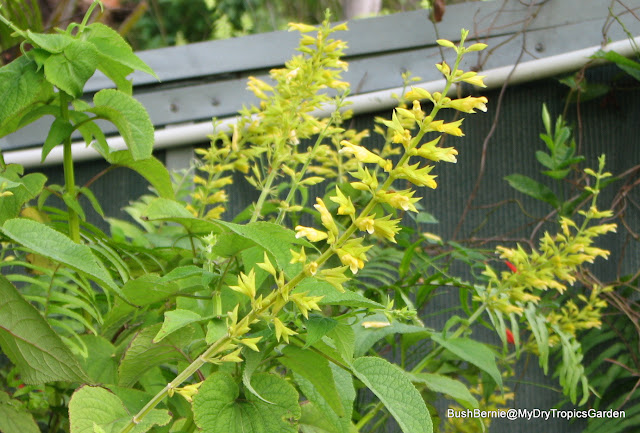 The huge sprawling Salvia madrensis is throwing out loads of flower spikes, 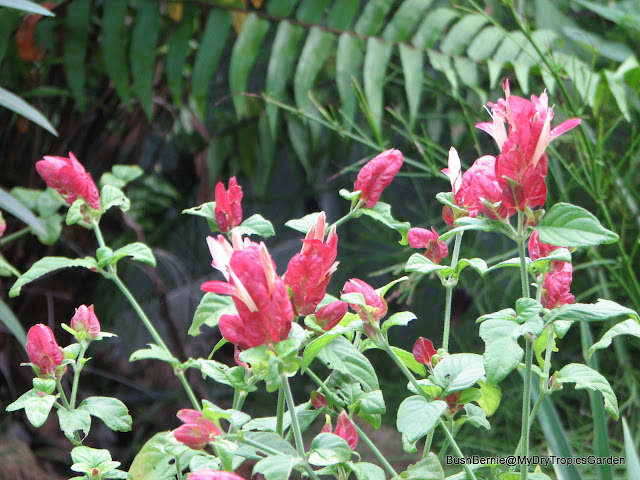 and the Justicia brandegeeana is covered in its wonderful bracts and tiny blooms.

Here and there, around the place ... what can be seen? 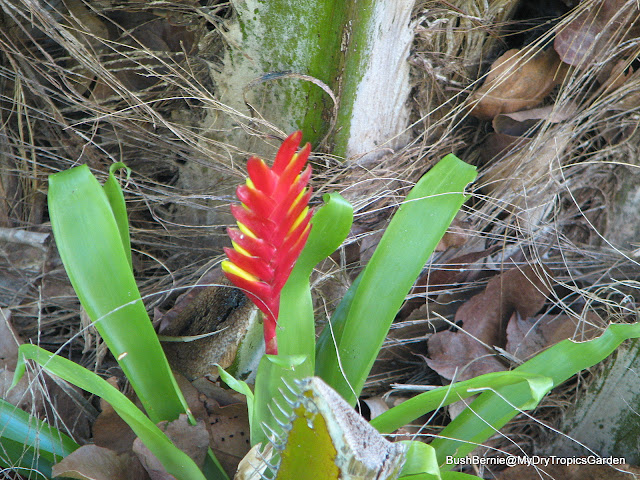 There's a Vriesea bromeliad blooming as it sits in amongst the stumpy ends of old palm fronds, 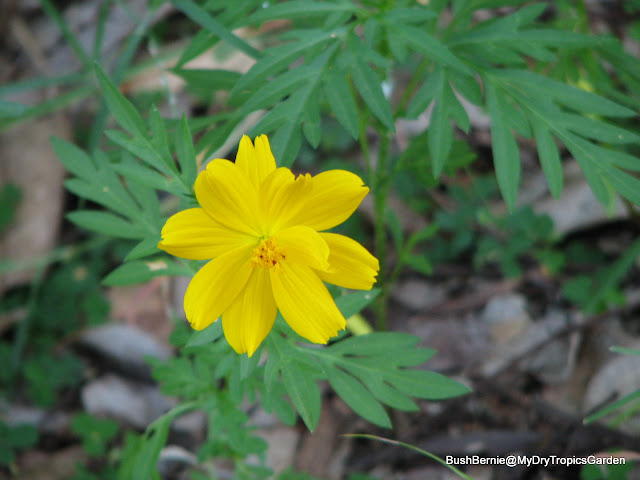 and there's a patch of Cosmos sulphureus that have re-seeded in a spot in one of the gravel driveway garden beds. 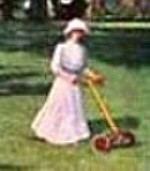