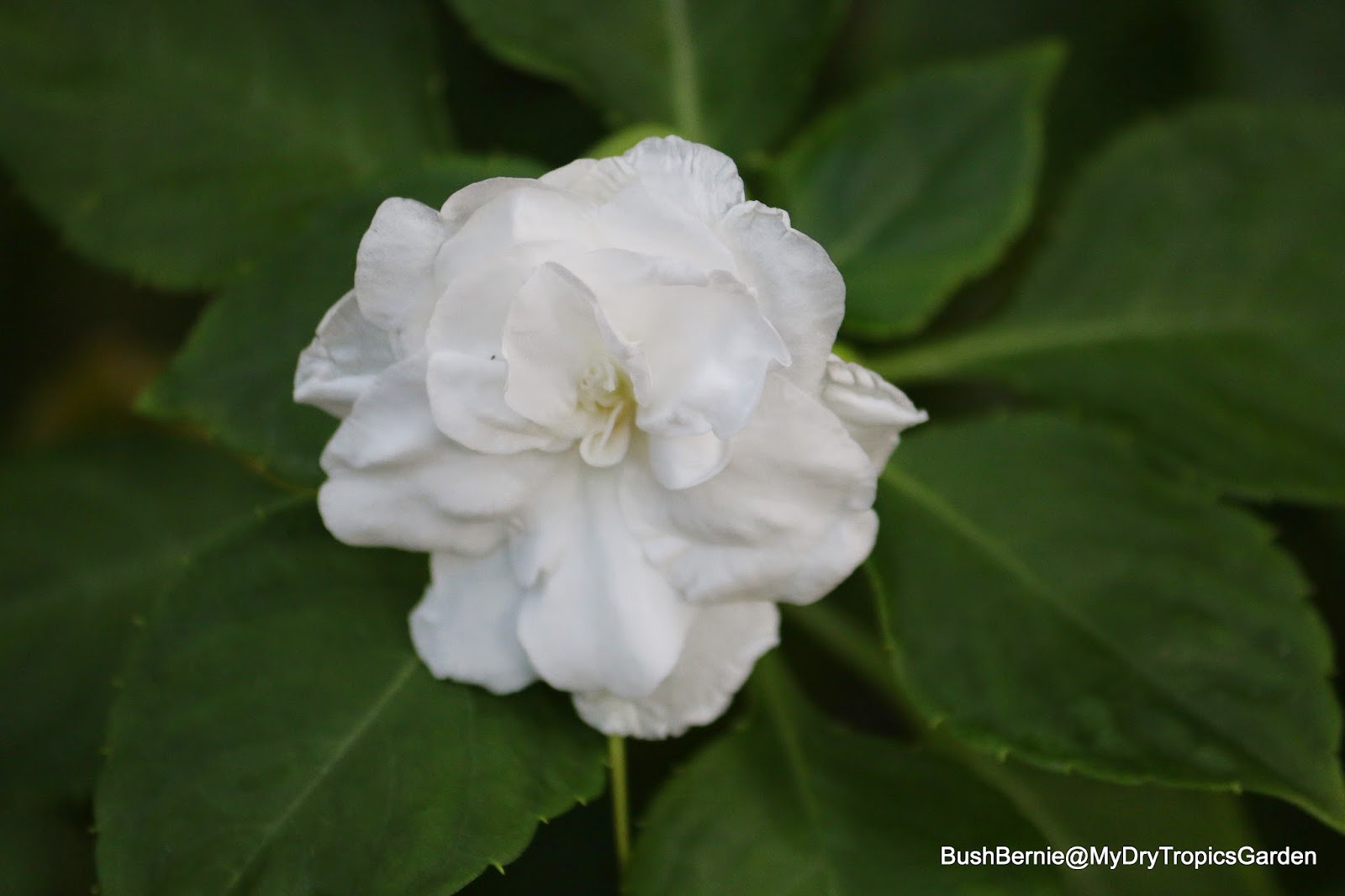 So, it's the 15th of April already and time for a Garden Bloggers' Bloom Day post.  My last GBBD post was back in January, which was our mid-Summer month here Downunder.  Now it's mid-Autumn.   In my part of the world there are no huge seasonal differences, and certainly not much changes from our mid-summer to our mid-Autumn.

The weather conditions are exactly the same in one respect.  Most days the temperature high is up around 30 - 33 deg C (86 - 92 F).  However, there are some other small differences which make the weather slightly more comfortable.  The night-time temps are a little lower, only by a couple of degrees, but much more comfortable so we don't need the air-con on at night any more.  The humidity levels are lower too, which makes the daytime temps quite comfortable for most of the day, and the air-con only comes on briefly in the afternoons some days.  At the moment, the humidity is down to 50%, which is terrific.   All the windows and doors are open and there's a slight breeze wafting through the house.

Right now it's supposedly the tail-end of our wet season.  During some years it can last from late November to late April ... sometimes!  This wet season, however, has been pretty much a failure.  We've had one of the driest and hottest wet seasons on record.

We had 185 mm of rain back in January, which wasn't too bad considering our average for January is around 273 mm.  From then till now though, it's all been very, very disappointing.

Only 31.8 mm fell in February - our average is around 305 mm - and a teeny weeny 5.2 mm fell in March, when we usually average around 190 mm.  So, our total rainfall for 2015 so far has reached 230 mm.  Our average Jan-Apr total is around 836 mm.  Not good!  Not only were the rainfall totals very poor, but the falls were quite scattered and uneven, so not all parts of our city and surrounds received the benefit of even these meagre falls.  My little corner of the area is one of those spots!

The result of this failed wet season is, of course, a garden that's looking pretty dismal with few blooms to share.  Mid-summer to mid-Autumn is pretty much down time in my garden anyway, but it's been even more so this year.

Right now, the new garden beds don't have all that much colour, but thankfully the plants are still hanging in there with help from the garden sprinkler.

Other areas that don't get a lot of watering from me, look terribly limp and thirsty once the sun gets high in the sky!

It's very early in the year for me to be watering the beds down beside our long driveway.  That doesn't bode well.  I think I'm going to have a hefty excess water bill this year.

Finding loads of flowers for this GBBD post proved to be just a little difficult. 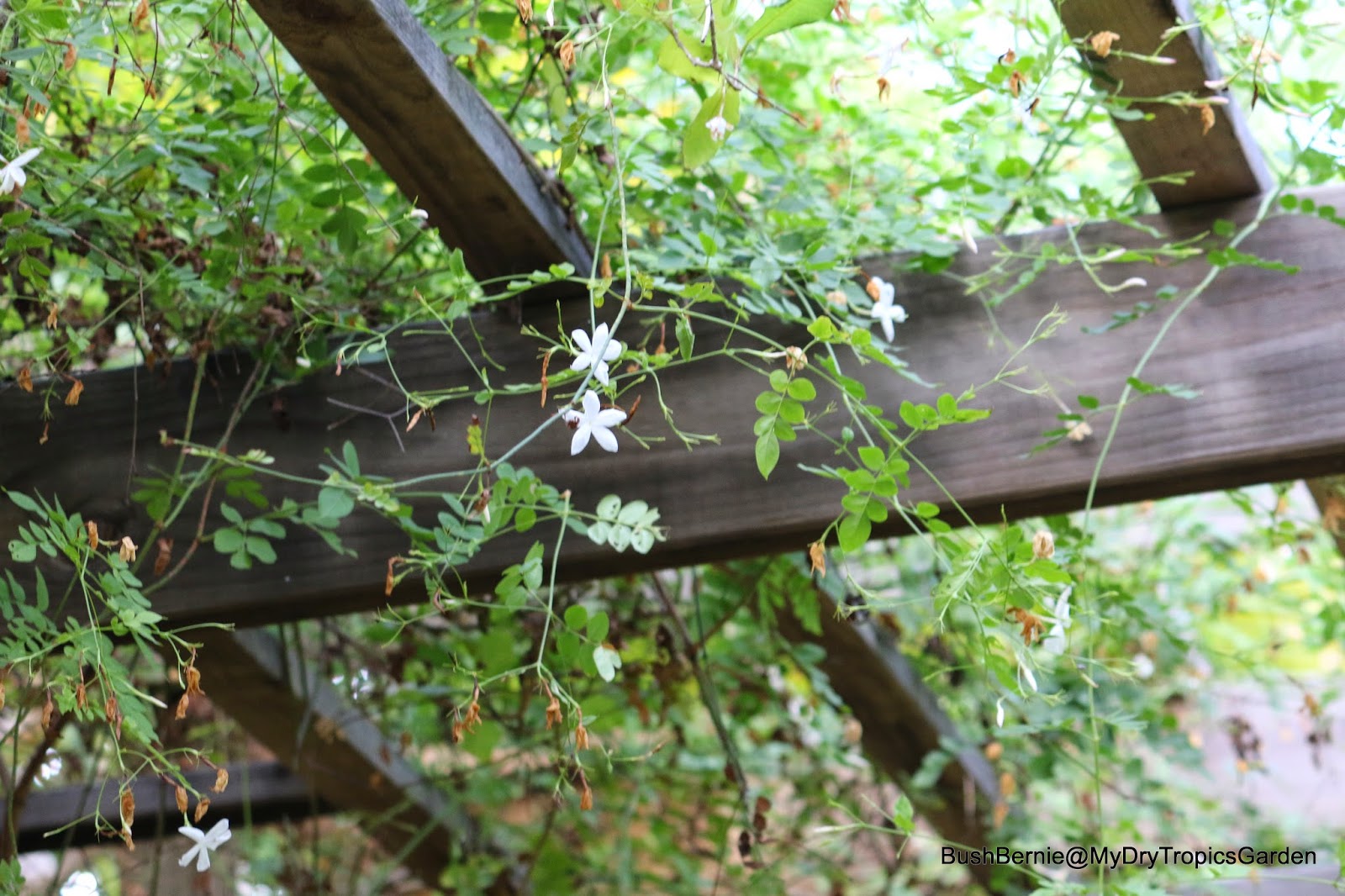 There are some flowers on the Jasminum that's climbing up the pergola out in the courtyard,

and the perfume that wafts across the courtyard into the kitchen is quite lovely. 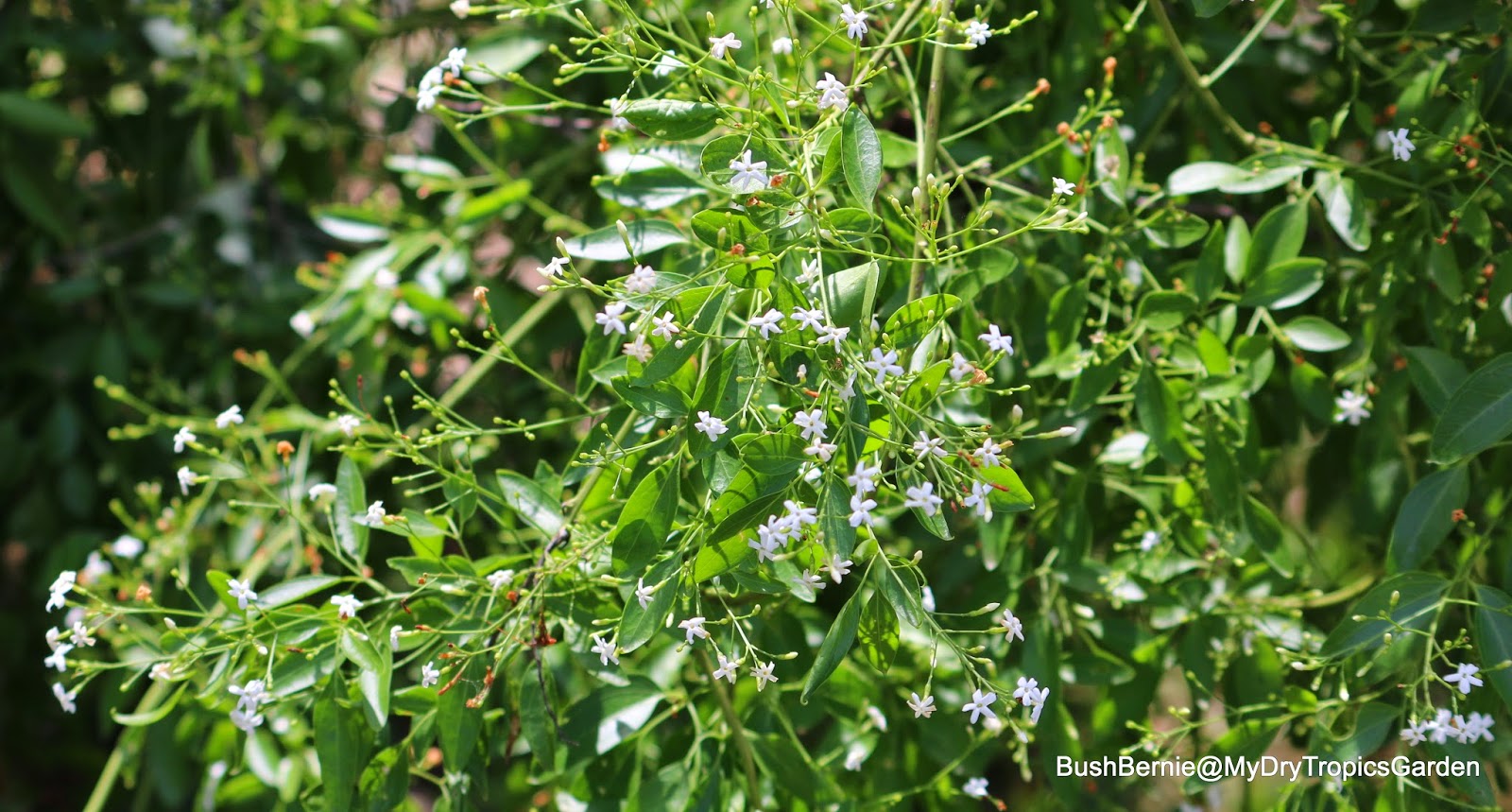 The native Jasminum, Jasminum didymum subsp. racemosum, is also blooming at present.  It's growing in a distant spot along one of our fencelines, and climbing all over another of our native shrubs. 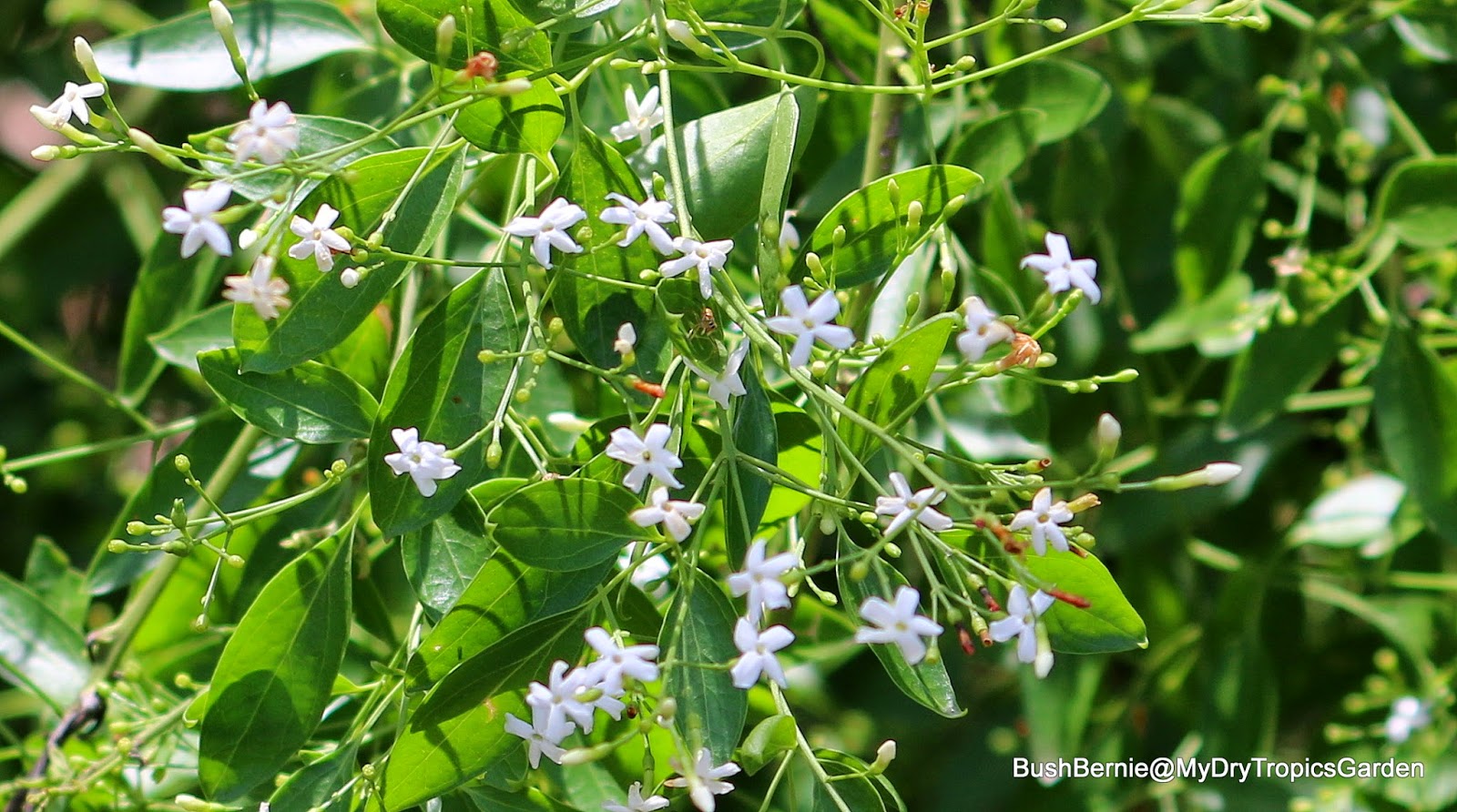 The perfume is quite delicate and you do have to get close to discern the scent.  Fortunately, I was strolling around the place very early in the morning and stumbled across the climber in bloom.  This is the first time I've noticed the whole climber covered in flowers.  Obviously I need to stroll around that corner of the garden more often.

The two Jasmines are the most prolific bloomers at the moment.  Apart from those two, there are only one or two blooms to be found on other plants scattered here and there around the place.

In the new garden beds located at the end of the driveway, you will find ... 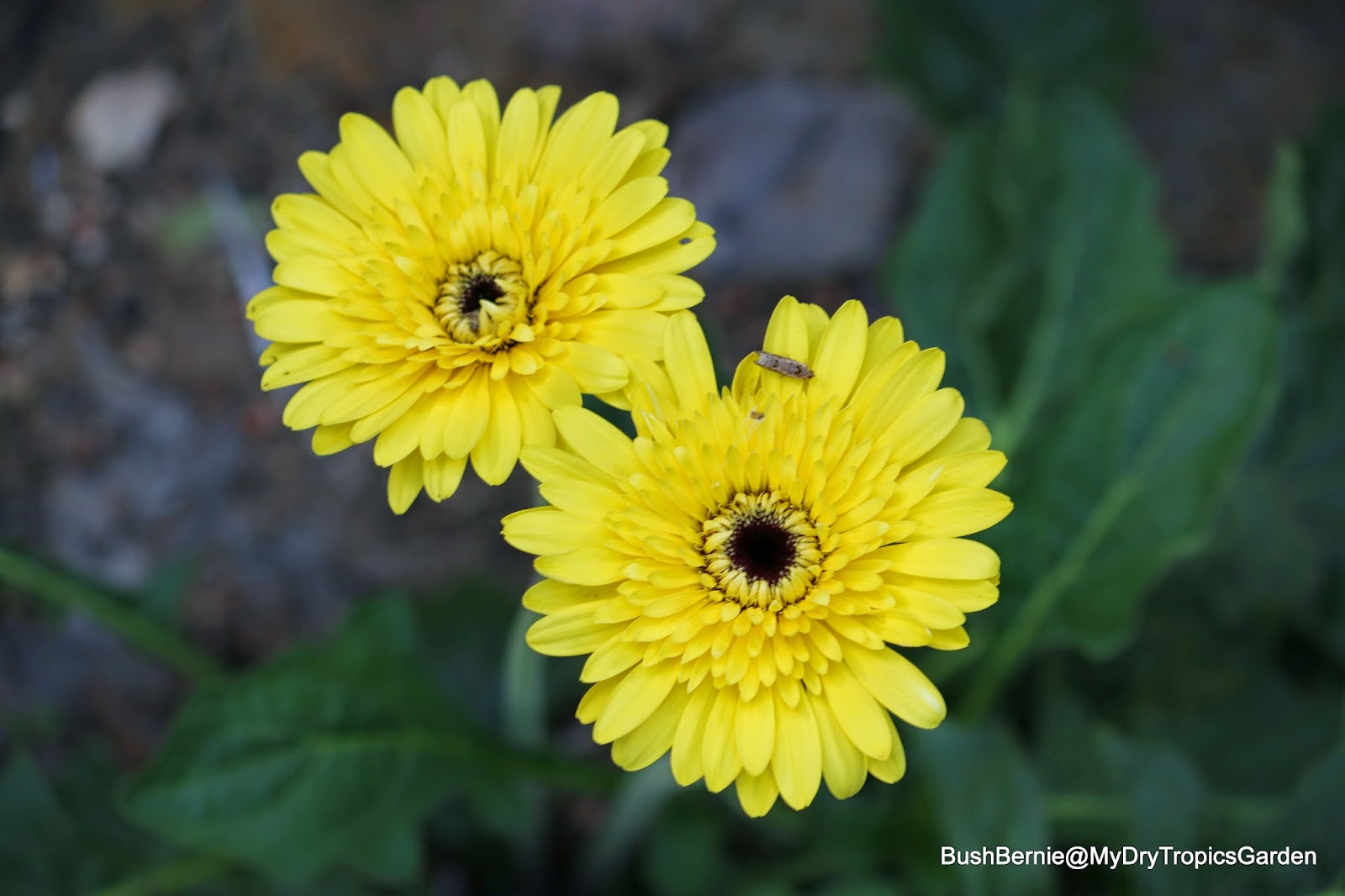 my new Gerbera with a couple of blooms, 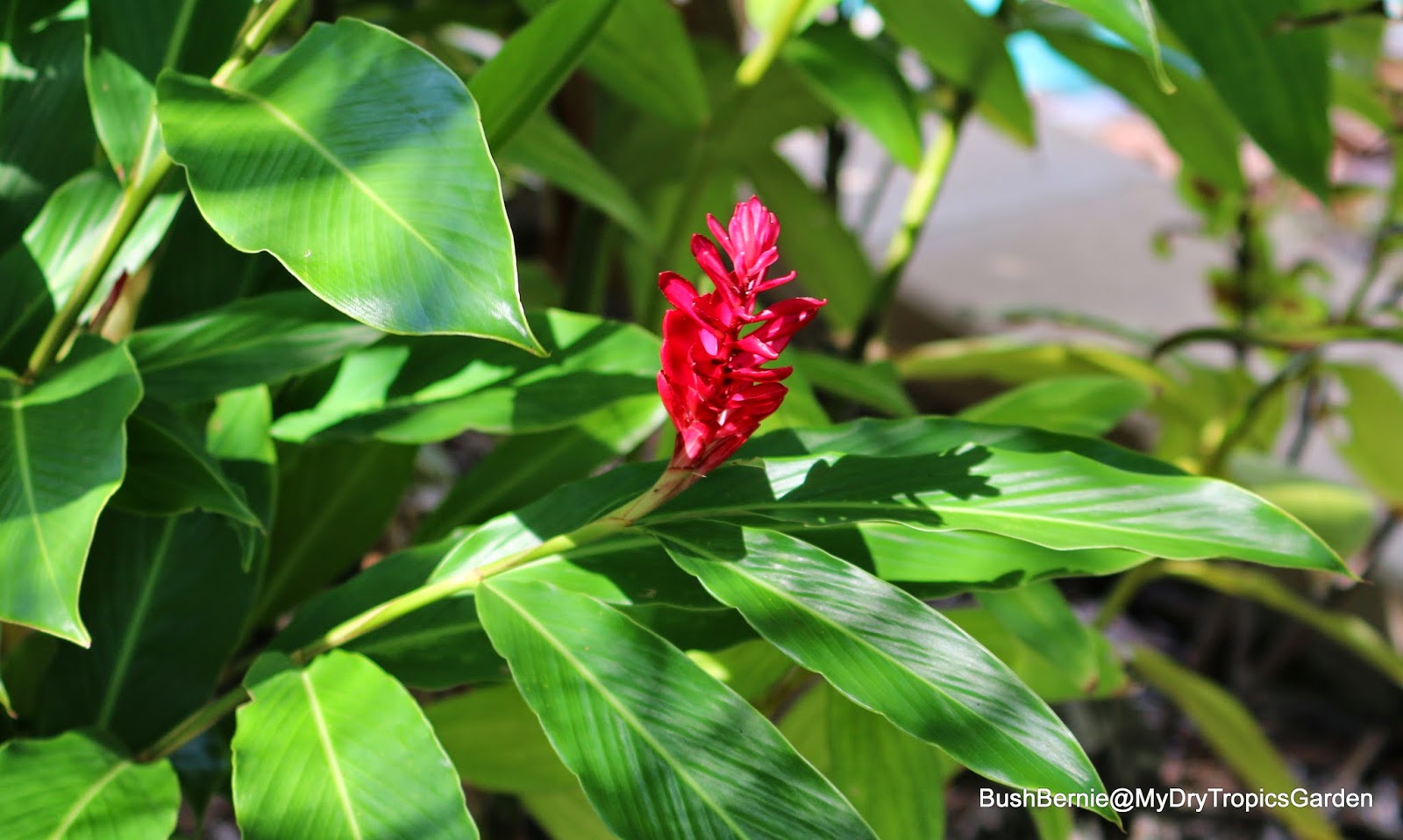 one bloom on my Alpinia NOID, 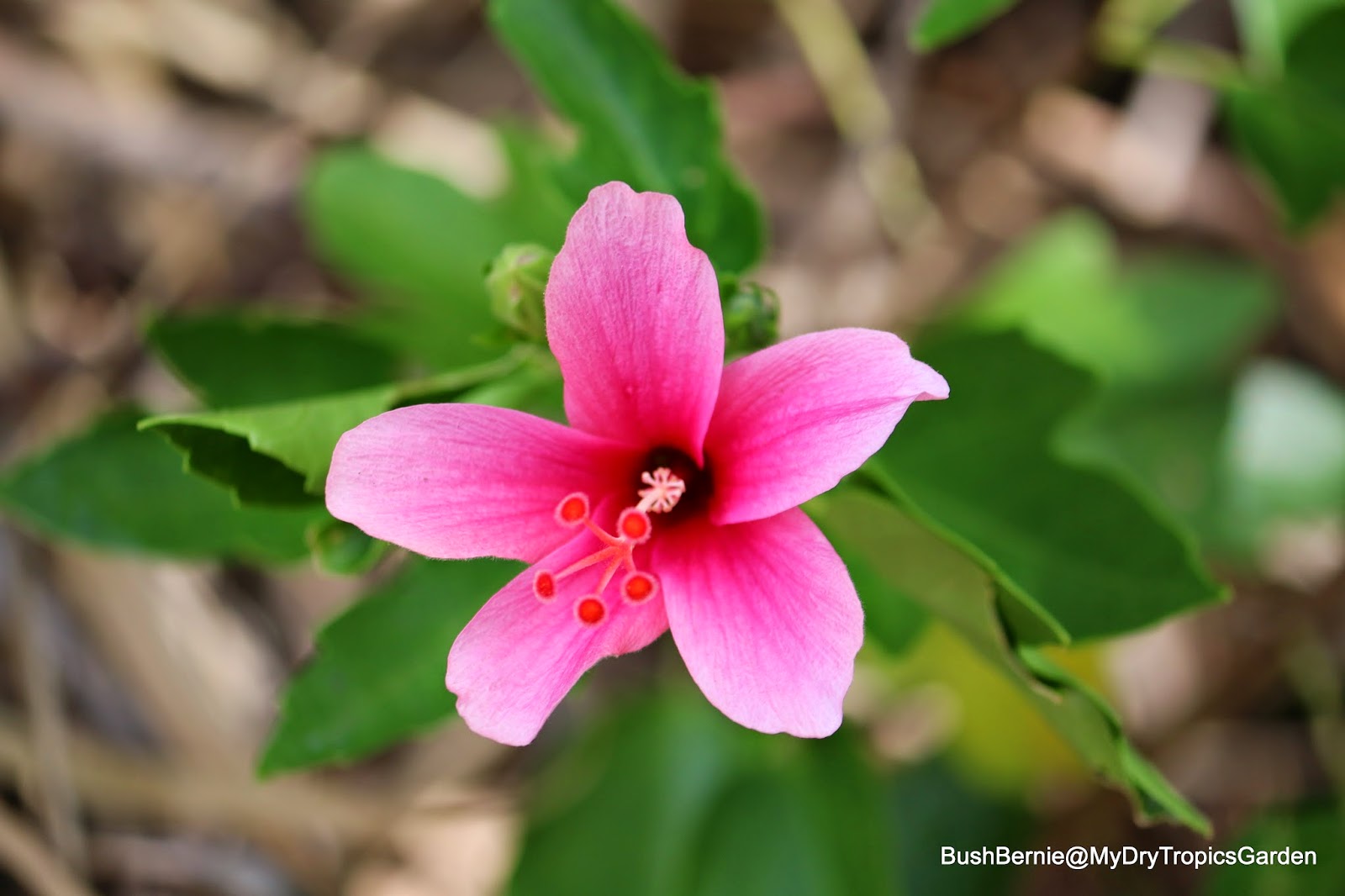 one tiny little flower on my teeny-weeny Hibiscus NOID, 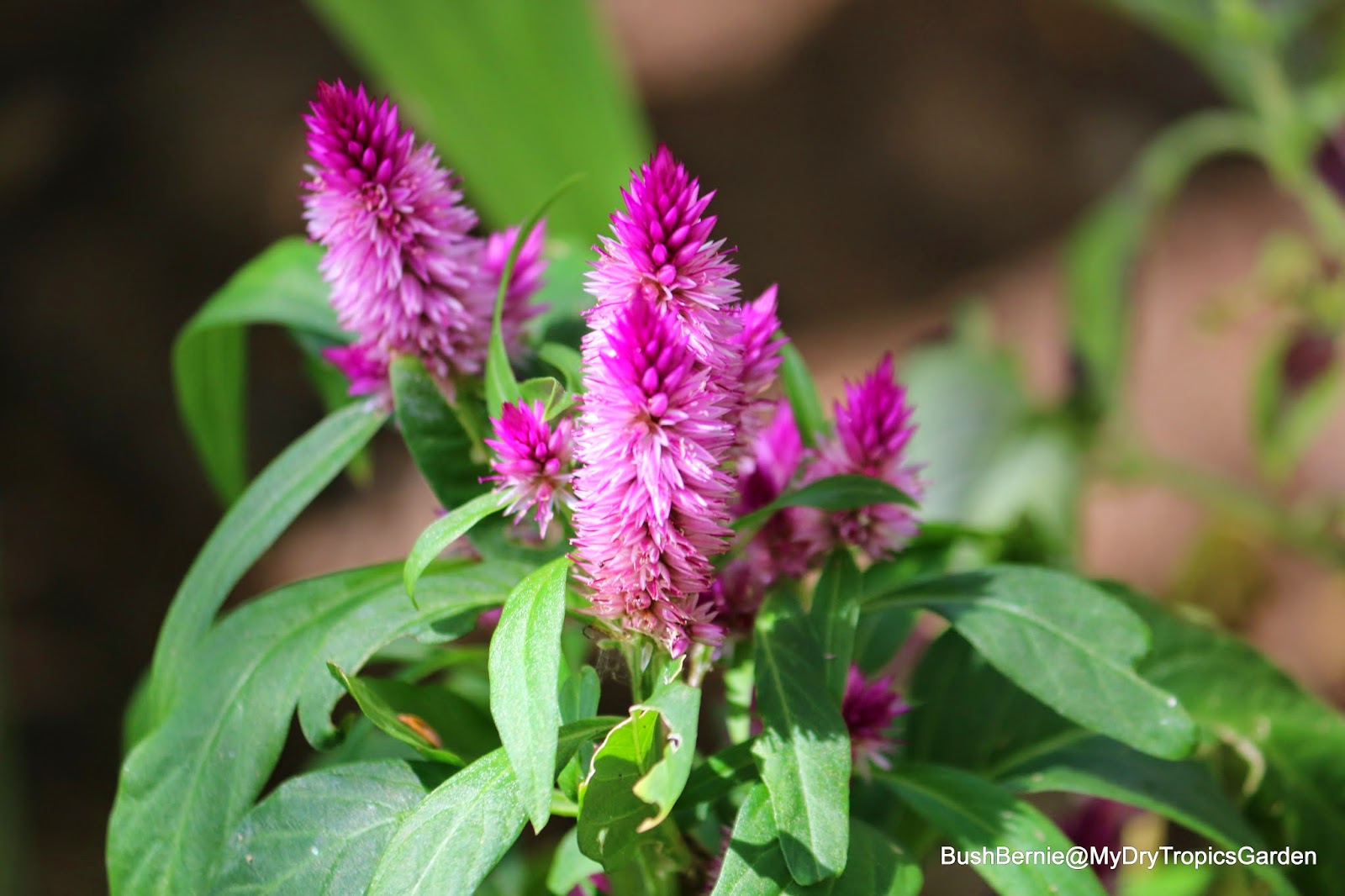 a couple of flower spikes on the self-seeded Celosia, 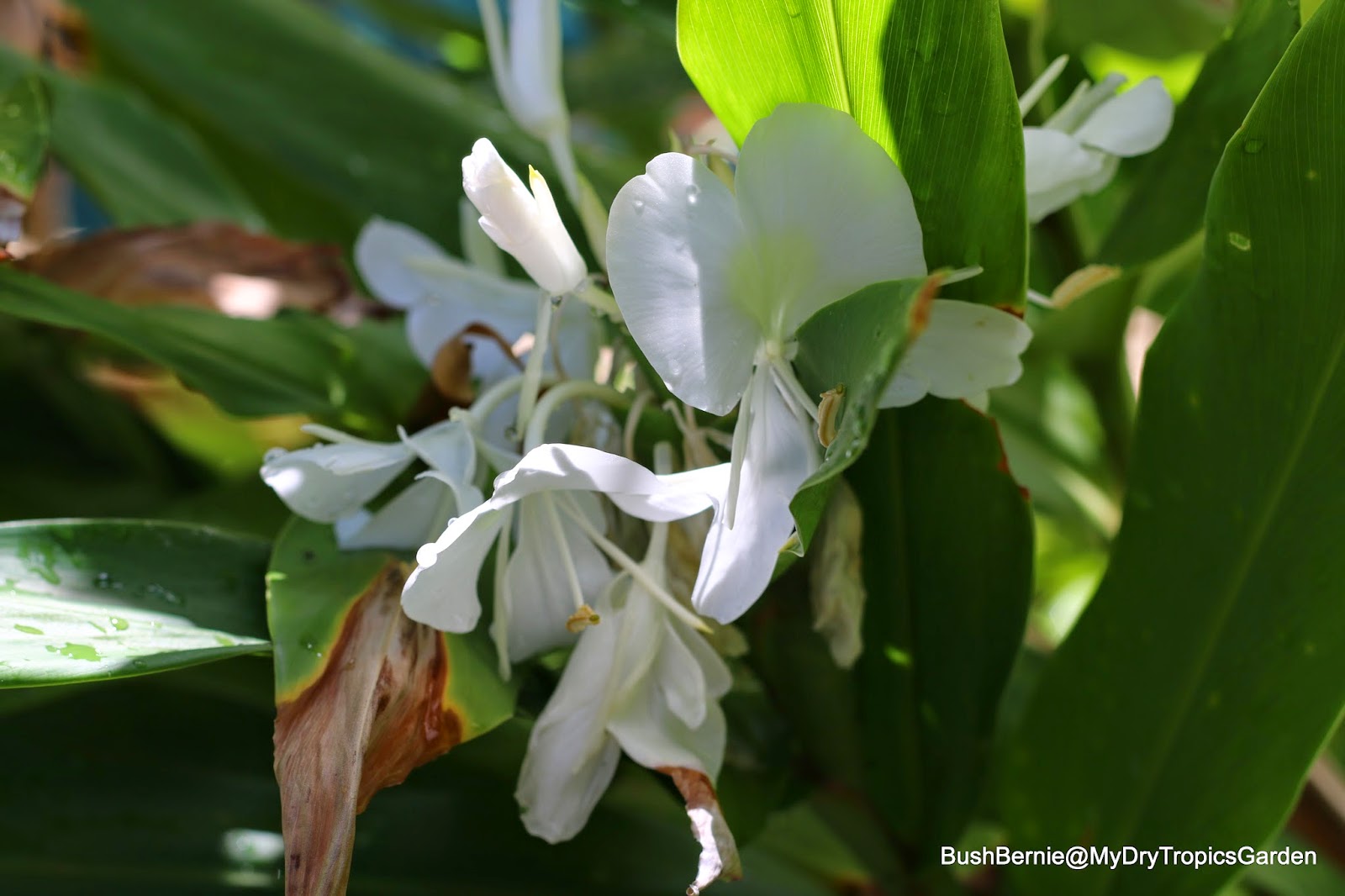 the last flower spray of the Hedychium coronarium, 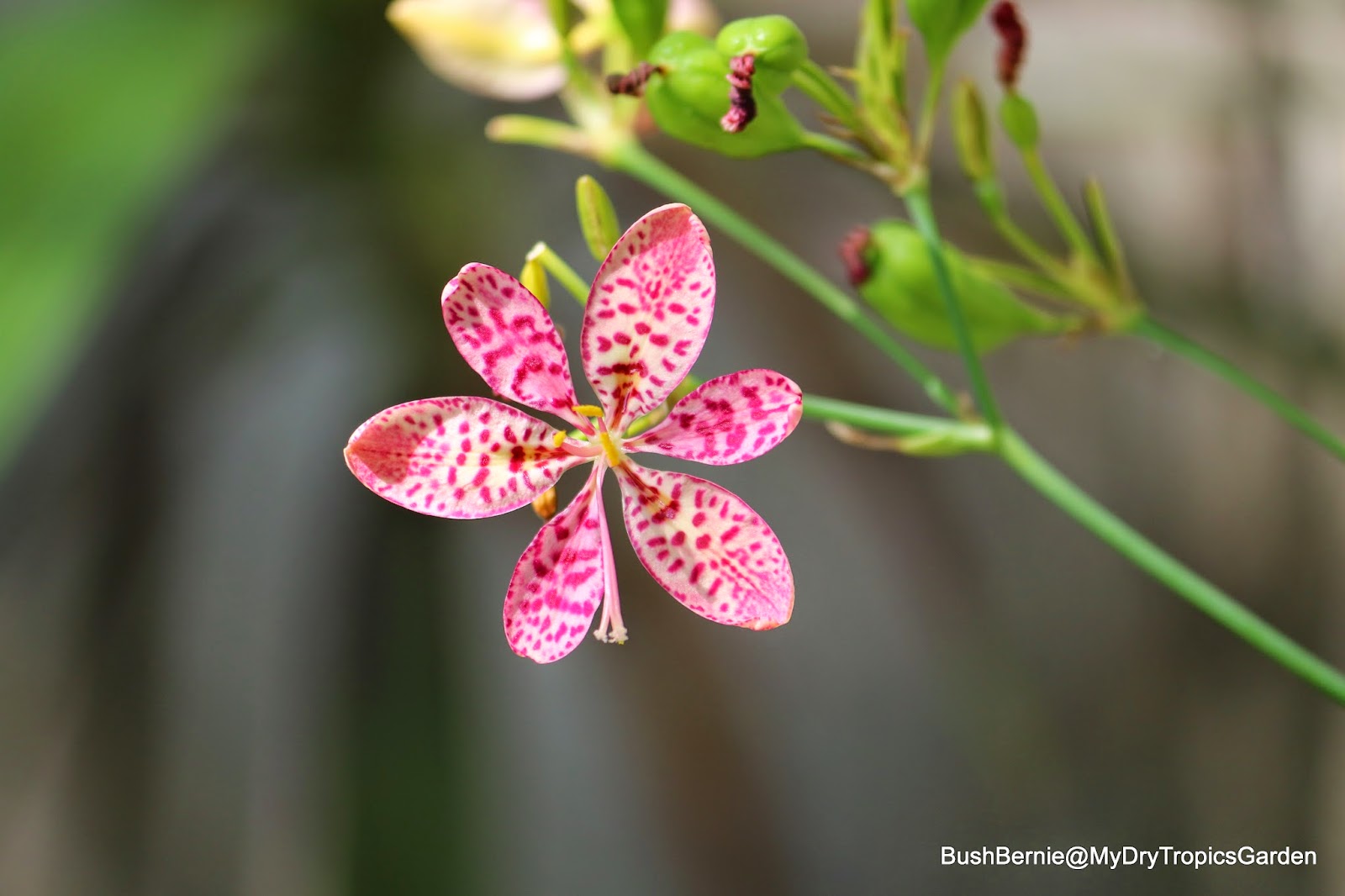 and one or two flowers on the clumps of Iris domestica, 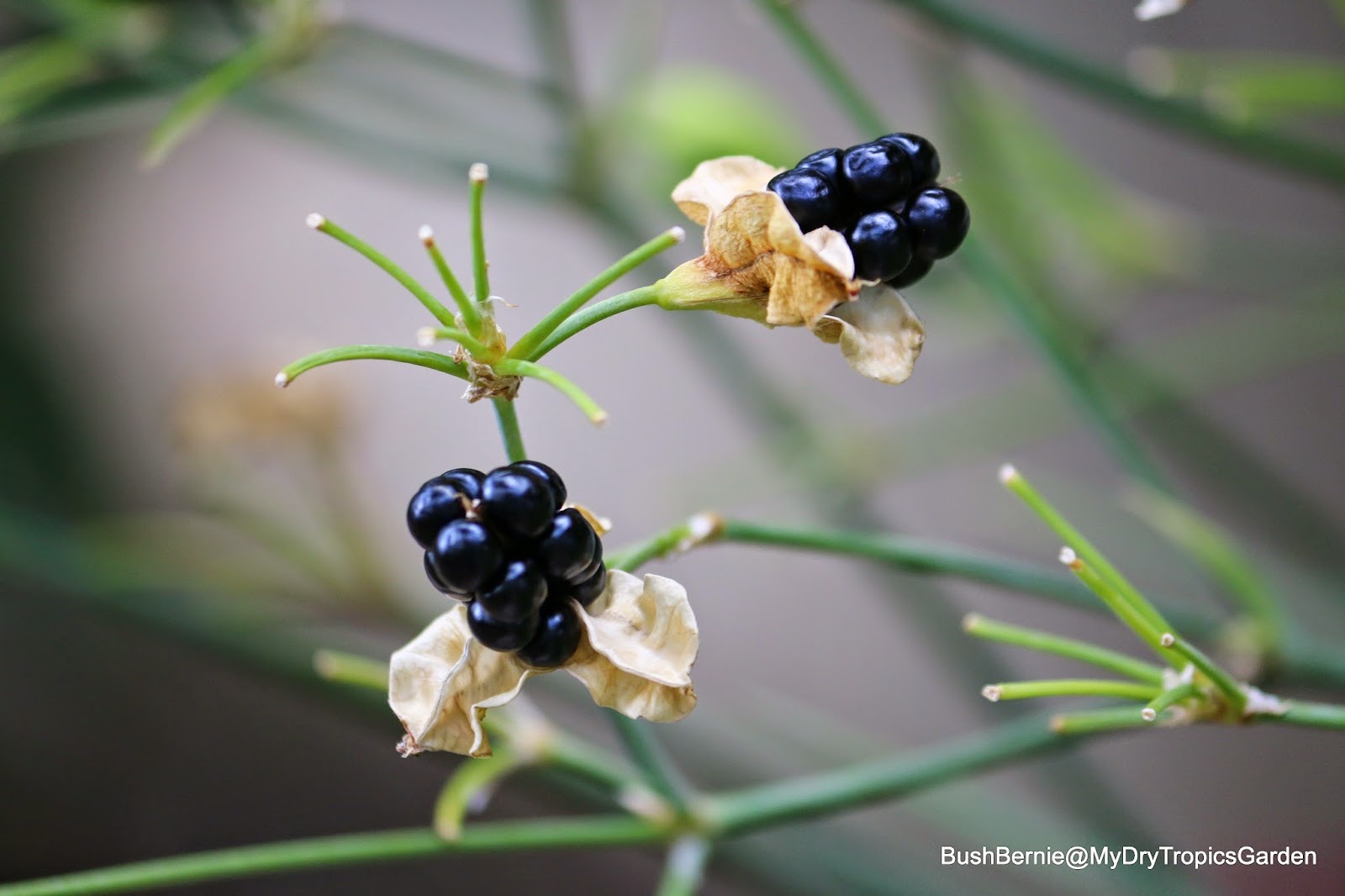 which are turning to seed.

In my shade house, there's not much in the way of blooms either, apart from ... 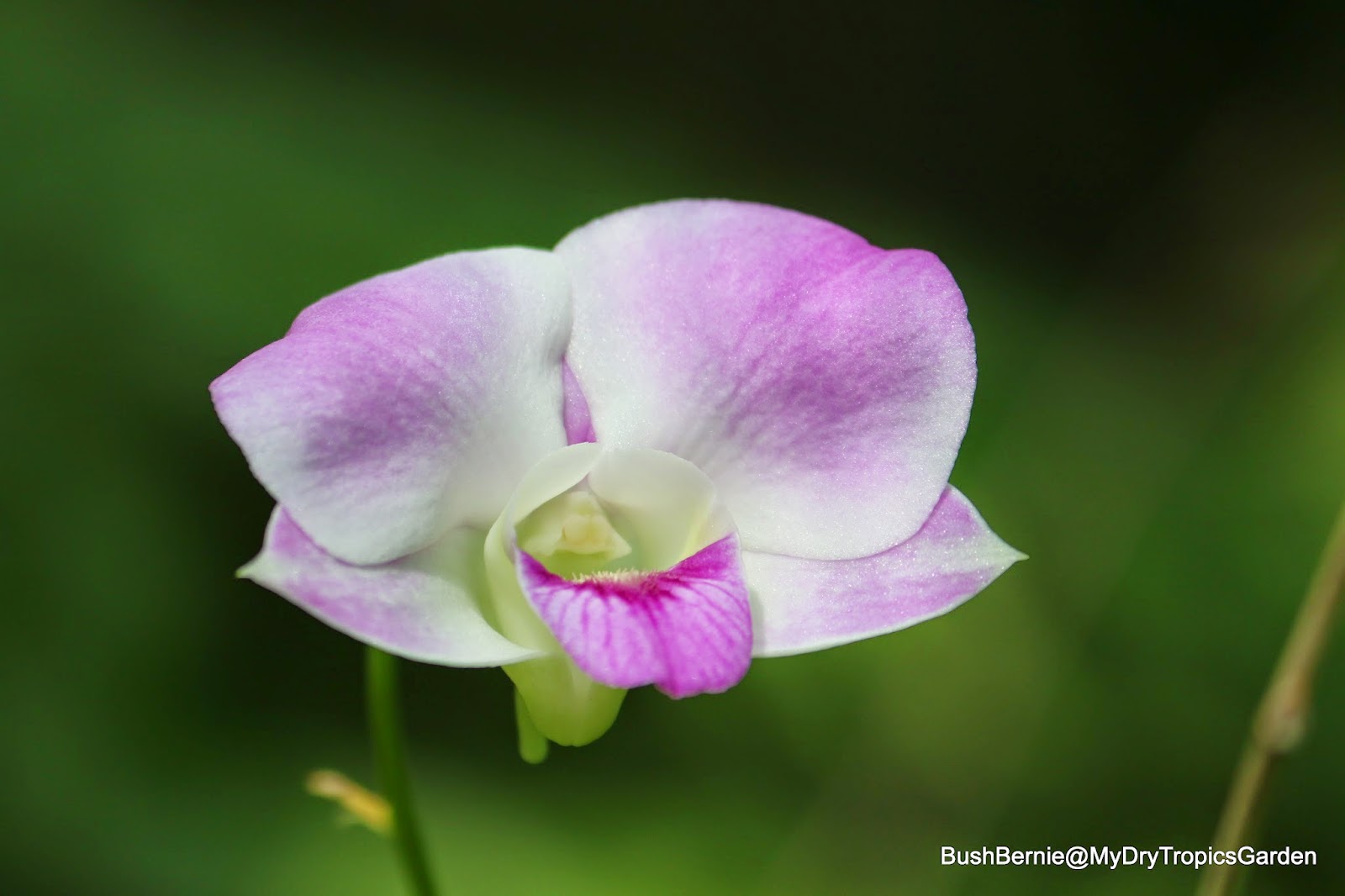 one bloom on my Dendrobium bigibbum bicolour, 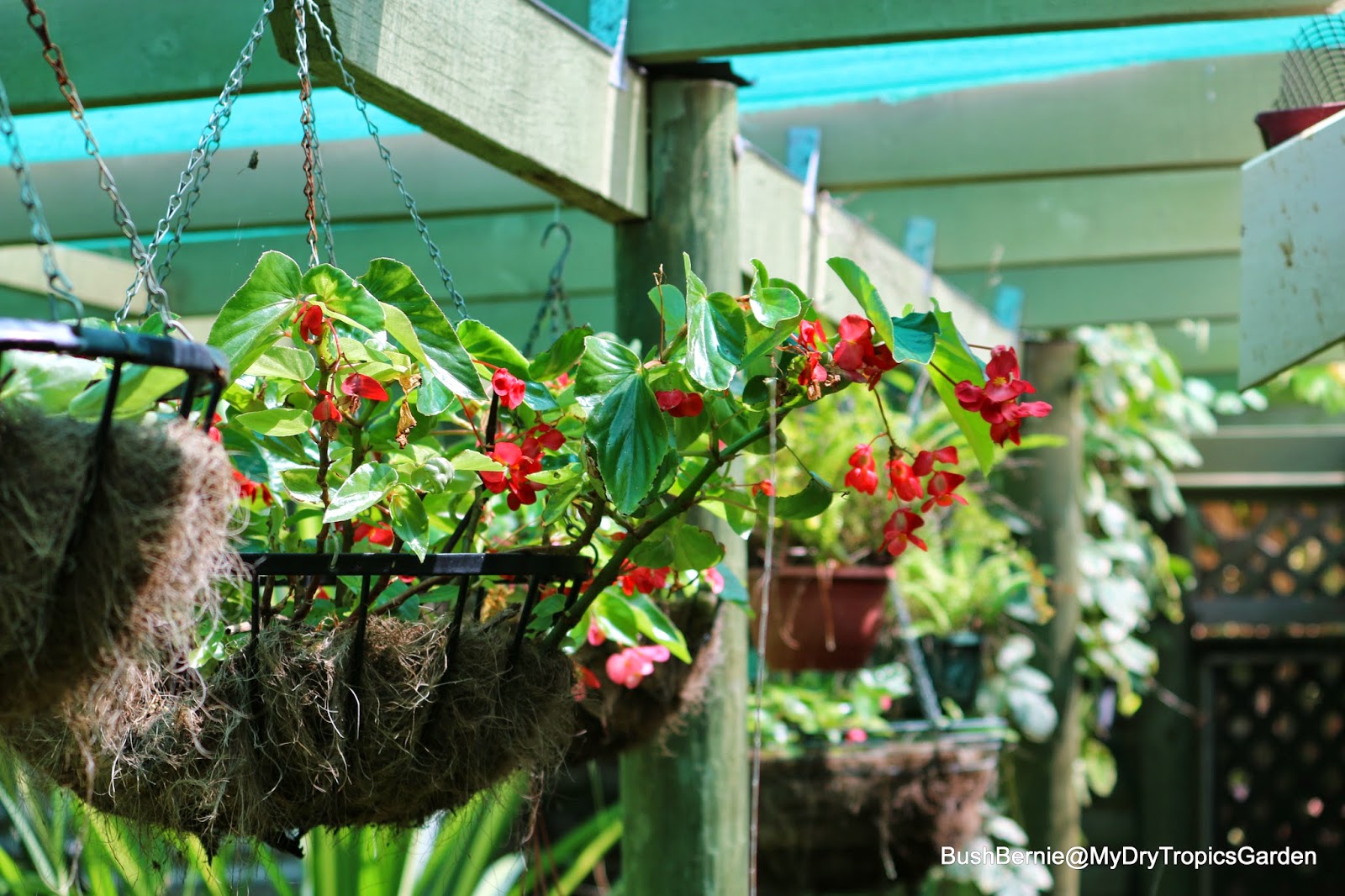 and a few flower sprays on the Dragon Wing Begonias.

In the front garden beds ... 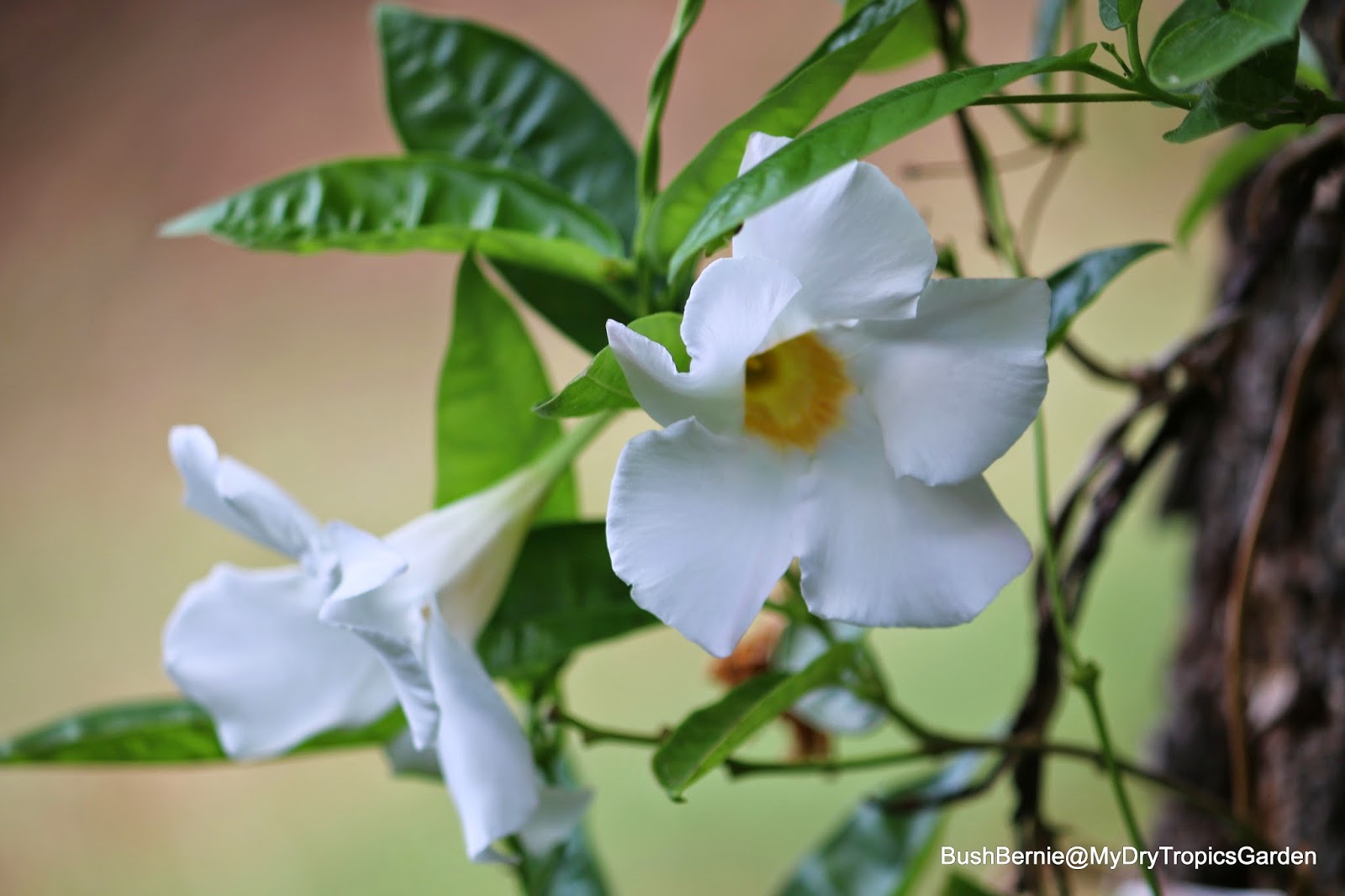 Mandevilla 'White Fantasy' is showing a couple of blooms. 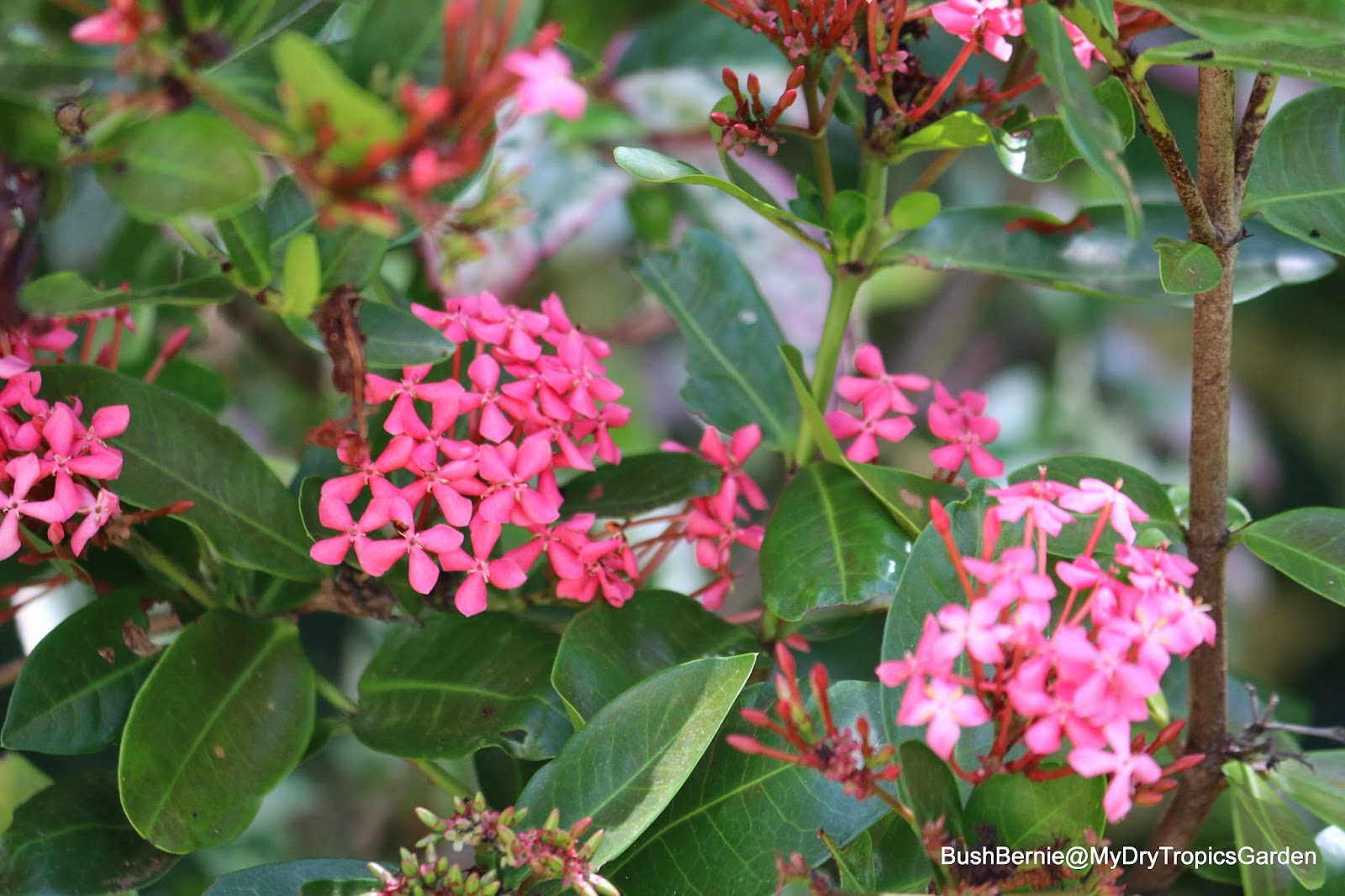 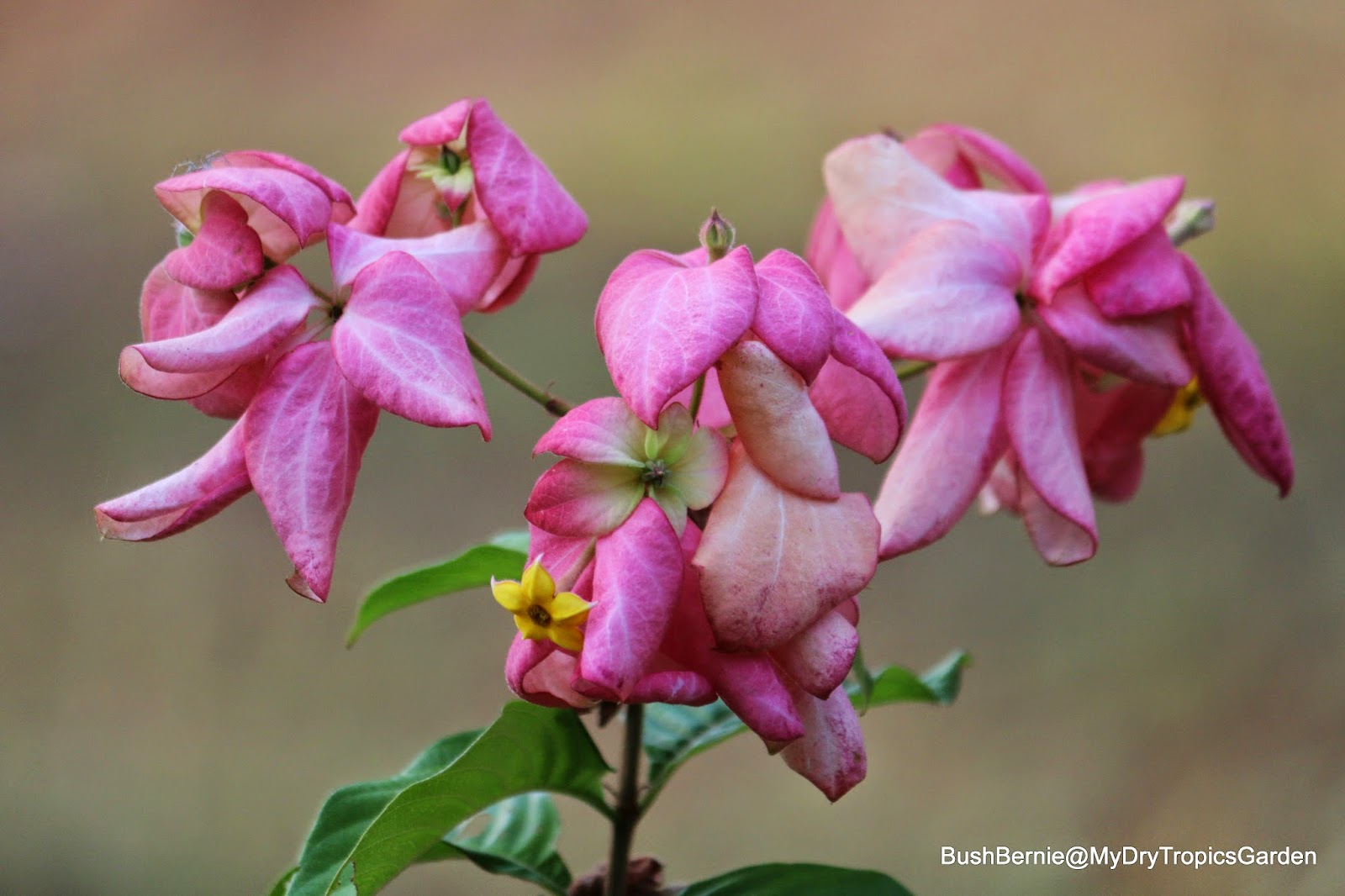 Ixora NOID is blooming and you'll see the last bracts and blooms of the Mussaenda philippica 'Bangkok Rose'.

In the courtyard garden ... 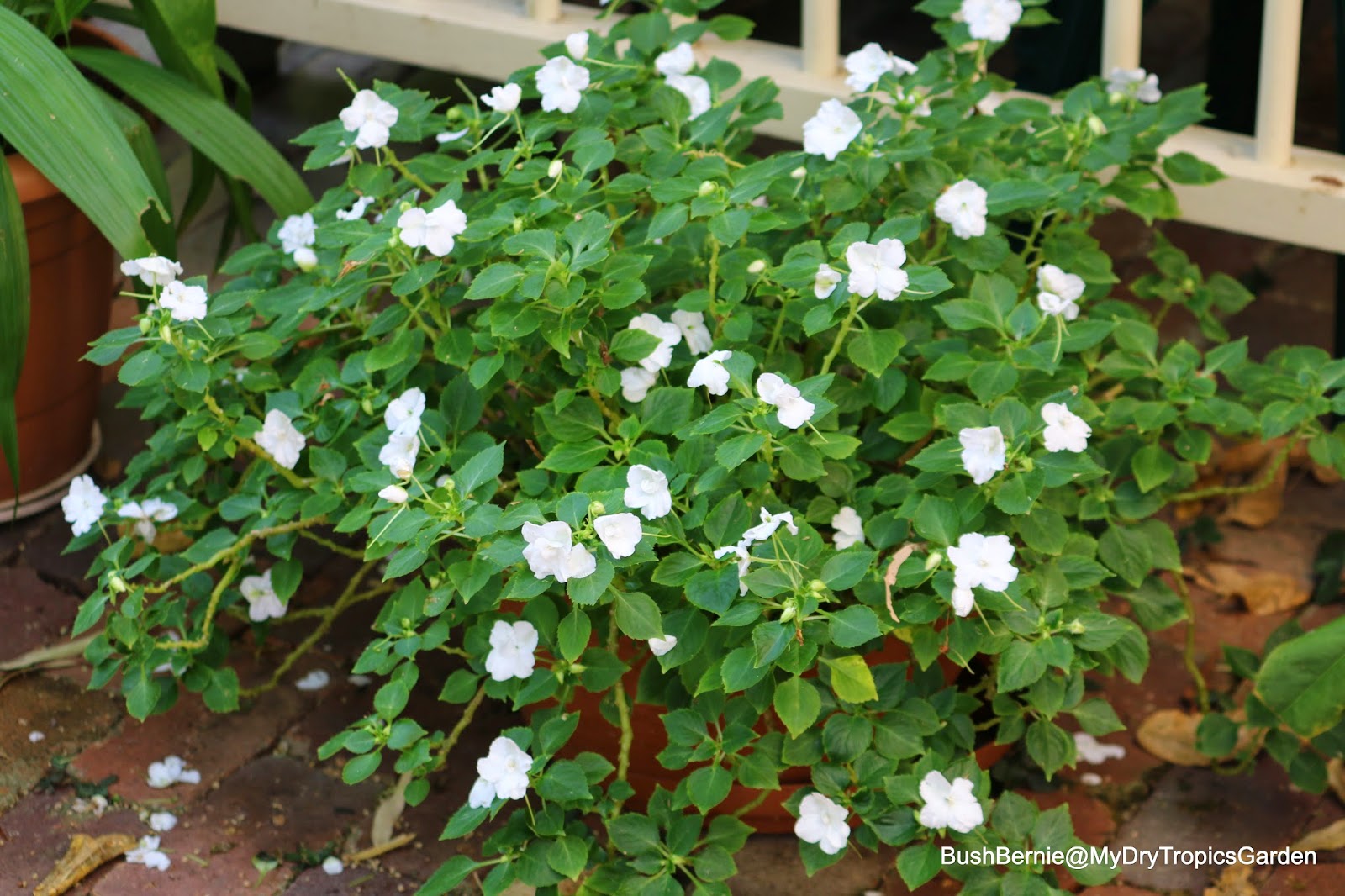 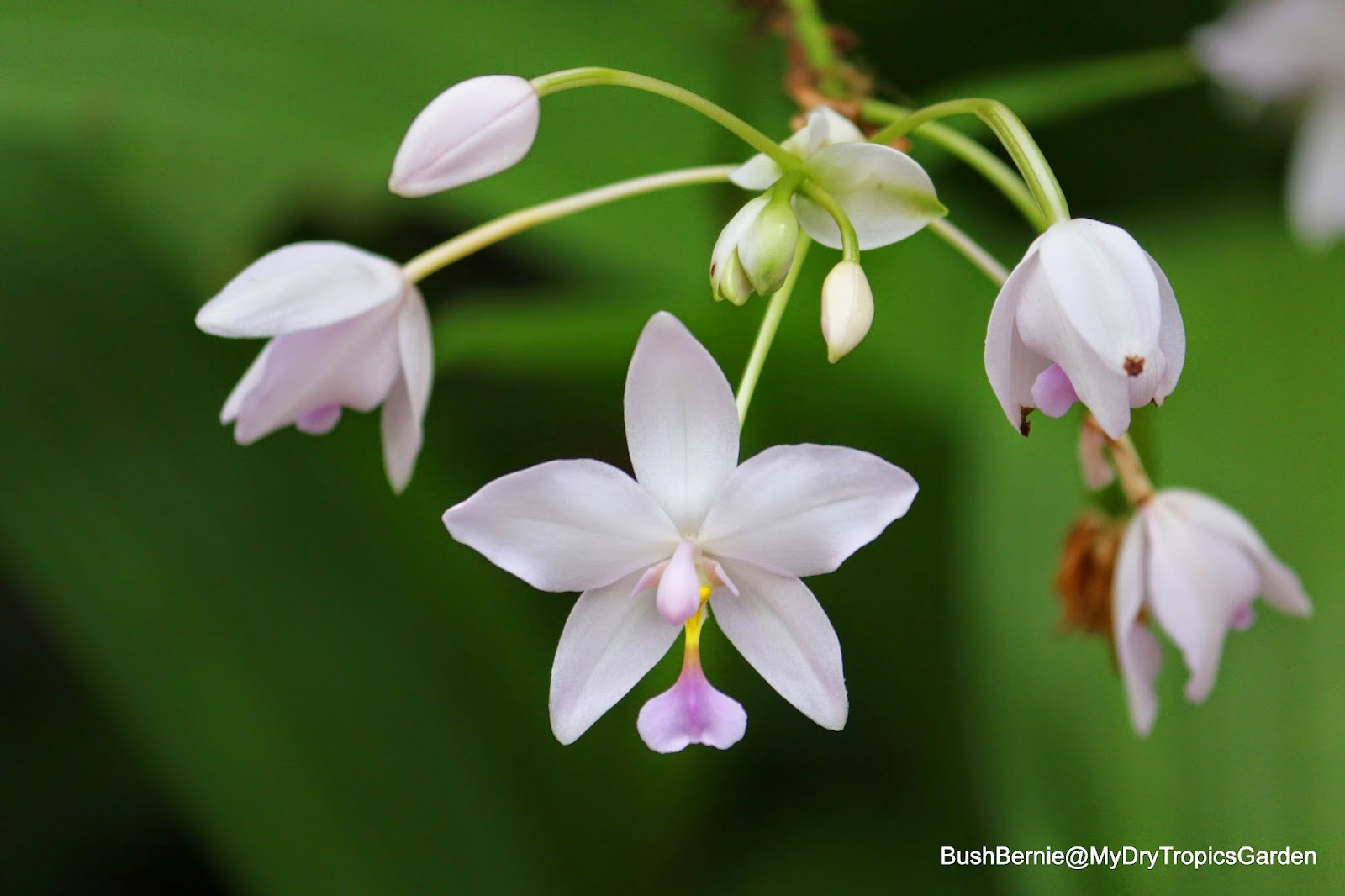 as is the potted Spathoglottis plicata. 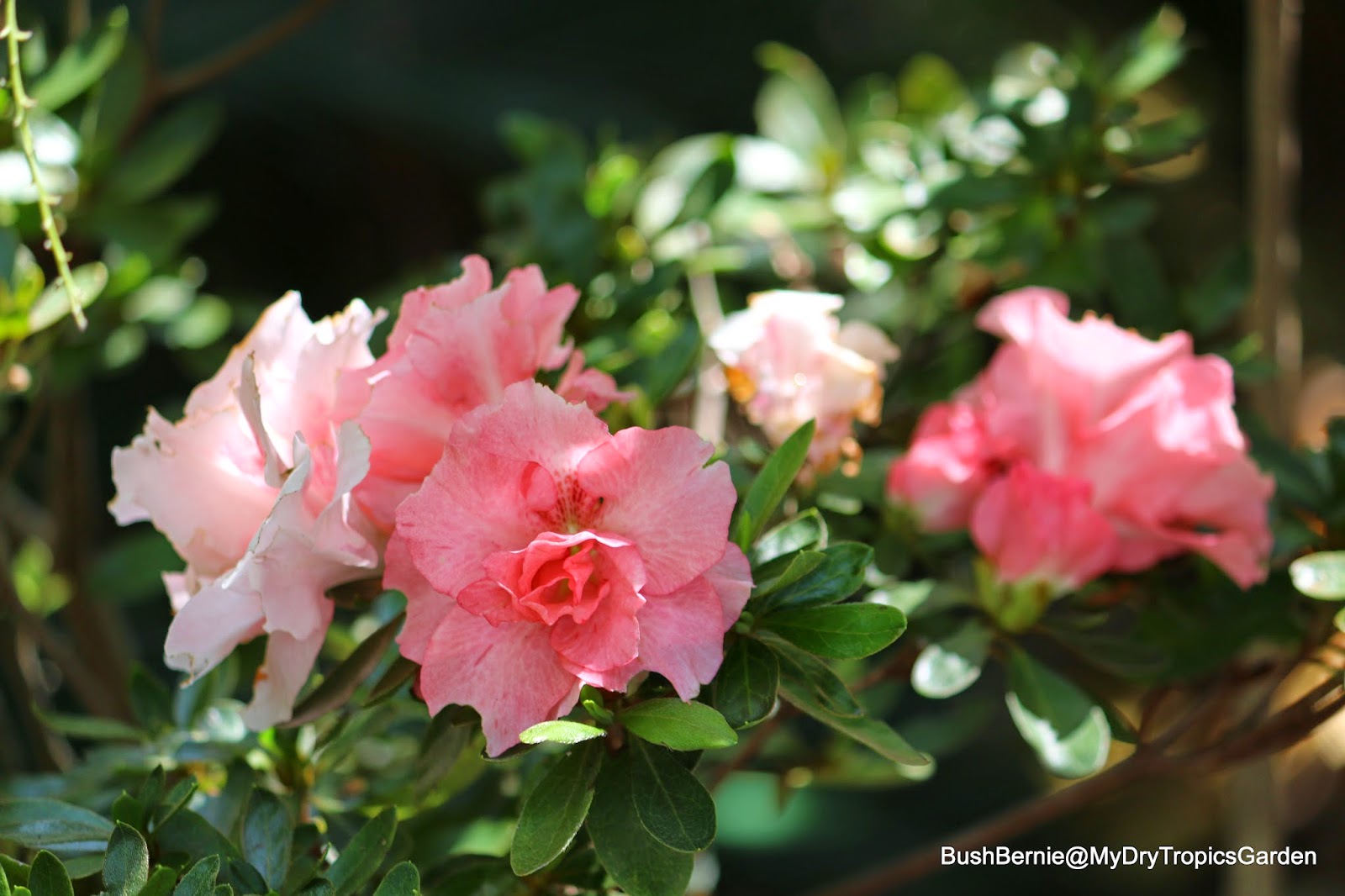 The potted Azalea has just begun its blooming cycle, so there are a few lovely fluffy pink flowers to be found. 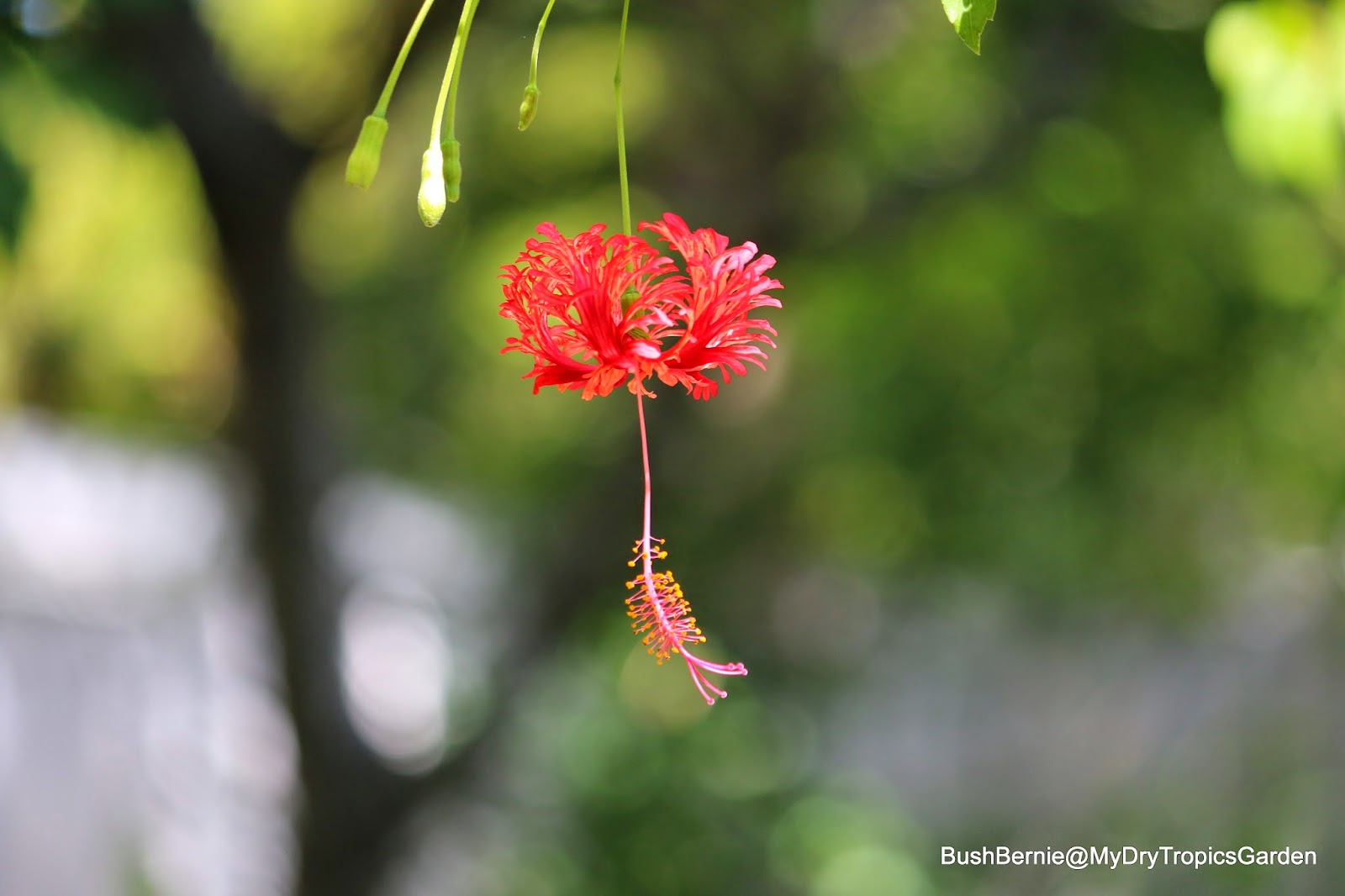 The Hibiscus schizopetalus throws out these fabulous flowers every week or so. 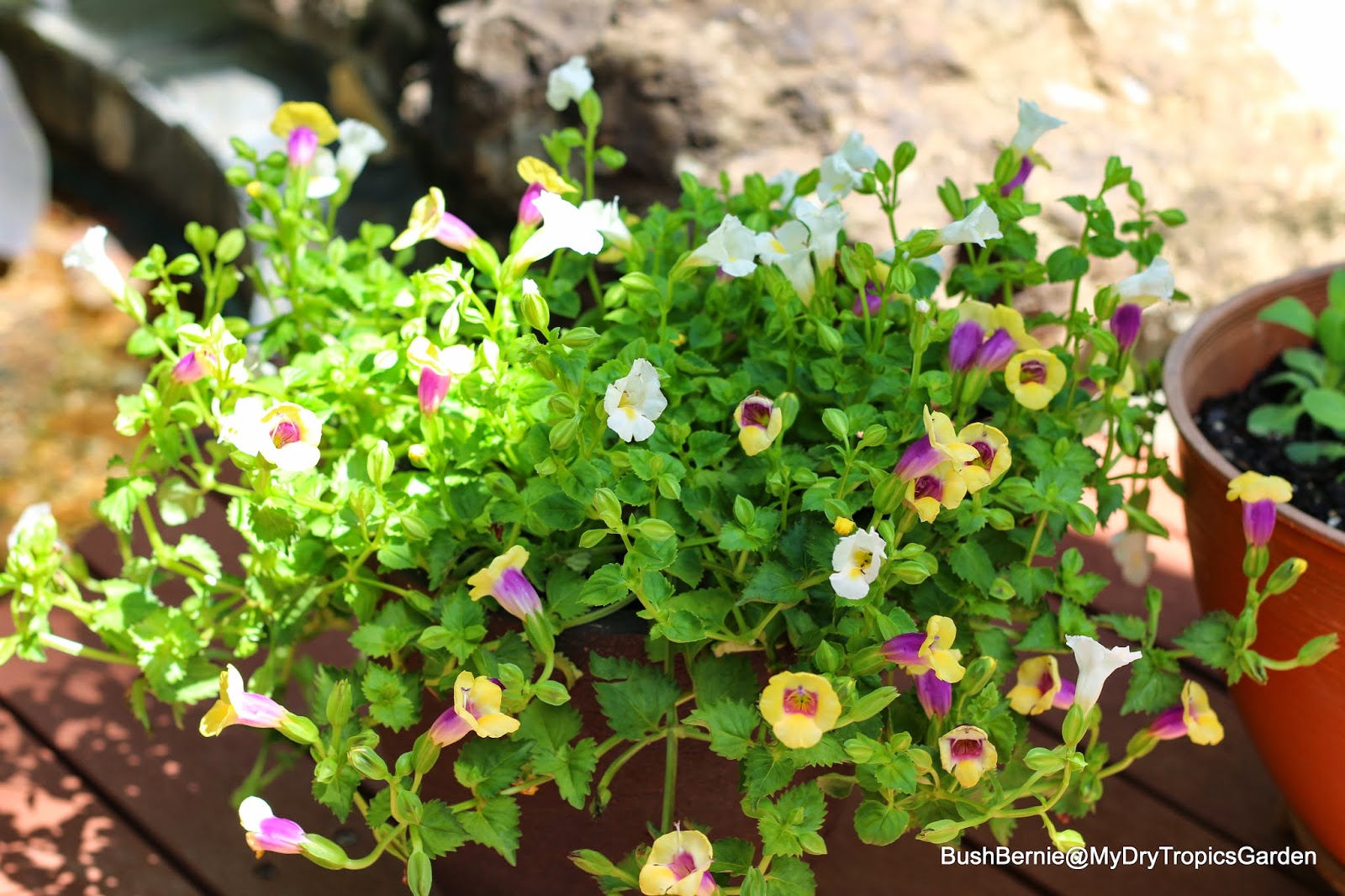 I've also only just potted up some Torenias 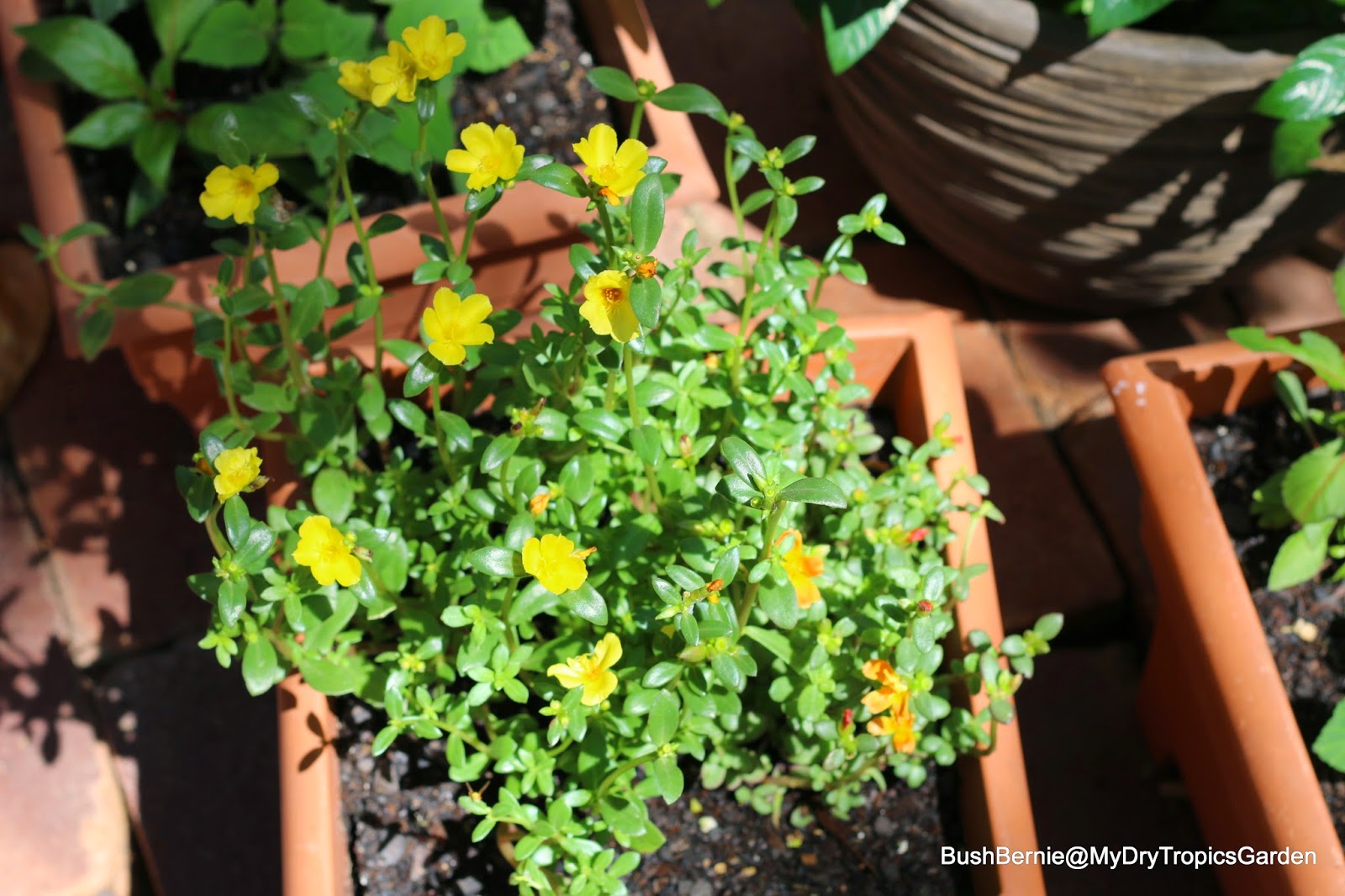 and Portulacas to add a little extra brightness to the courtyard garden. 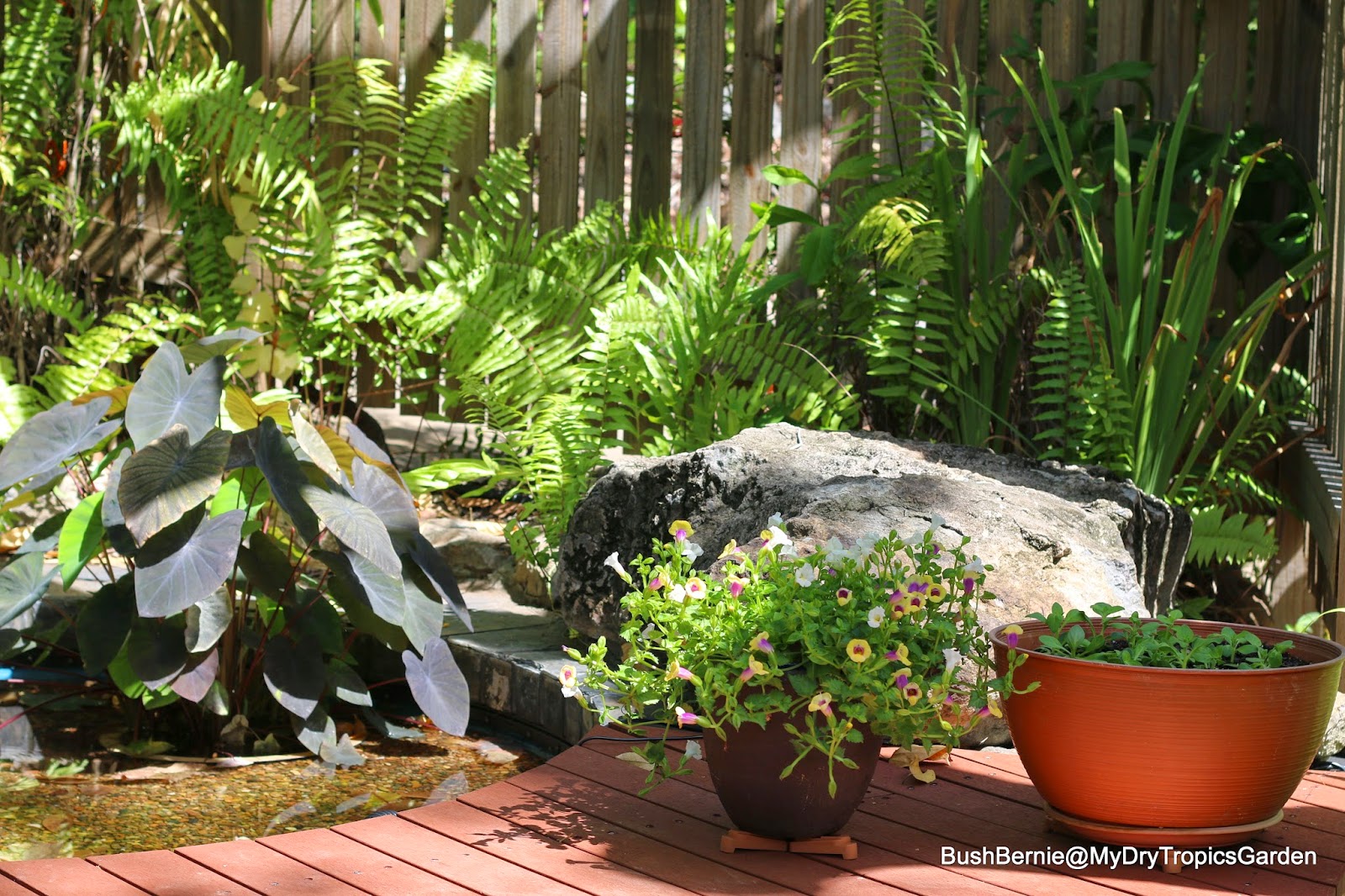 I've also planted some little Petunia seedlings, my favourite annual.  Soon I'll have a little more colour to cheer me up.

In the surrounding bushland the Acacias are beginning to bloom, but most of these are a long way from our house and verandah so we don't get to see them close up. 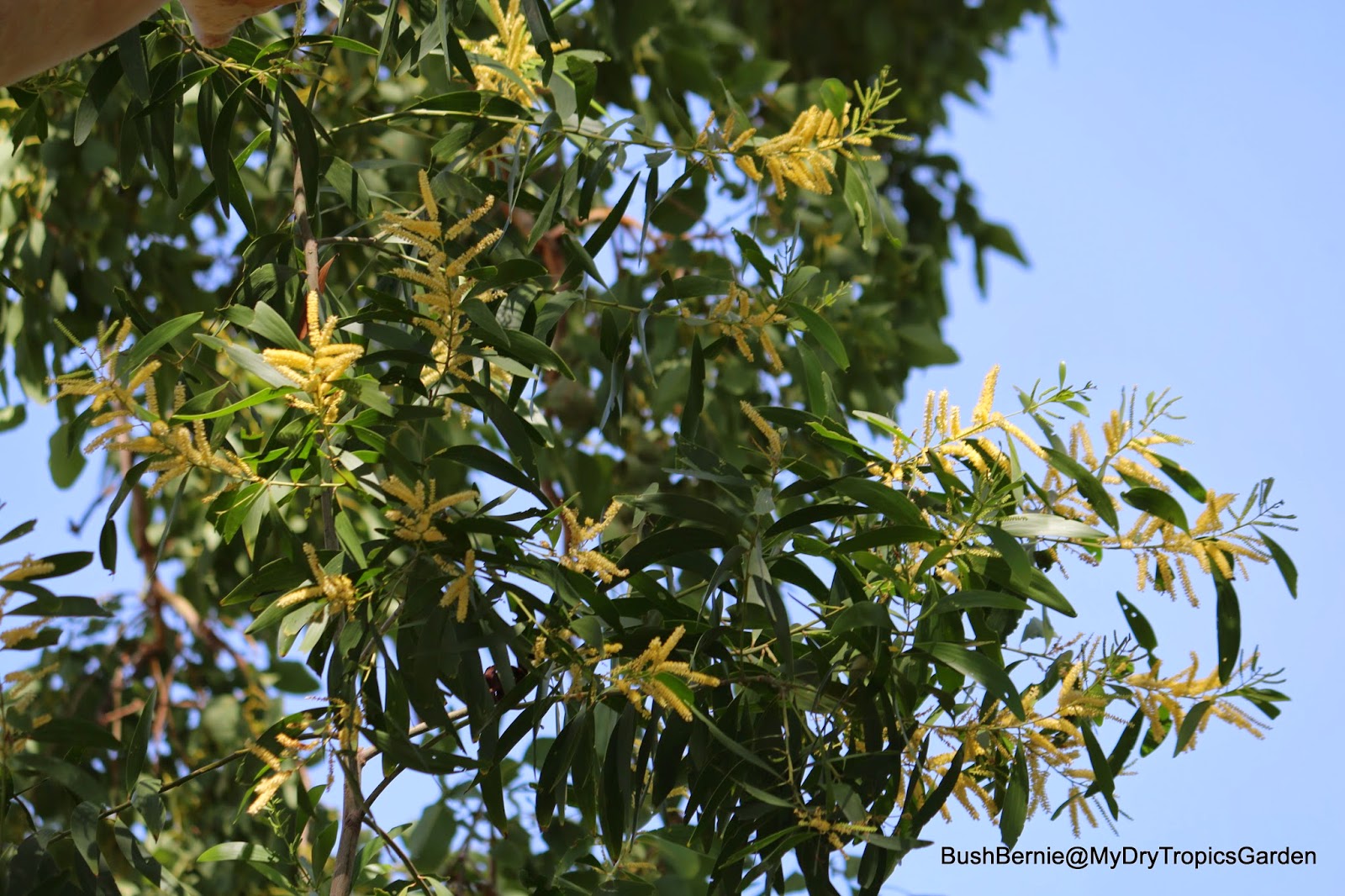 There is one located on our property though, and it's throwing out more and more flower spikes every day. 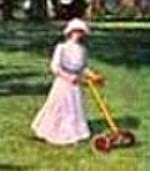