Rain in October is not unheard of here, but it is not usual.  So I've really enjoyed listening to the drumming of rain on the corrugated tin roof over a couple of nights lately.  The garden has certainly enjoyed the showers, although it really needs a drenching to recover from the dry season.  Still, our short wet season is quite a way off yet, and the plants will have to keep soldiering on until then. 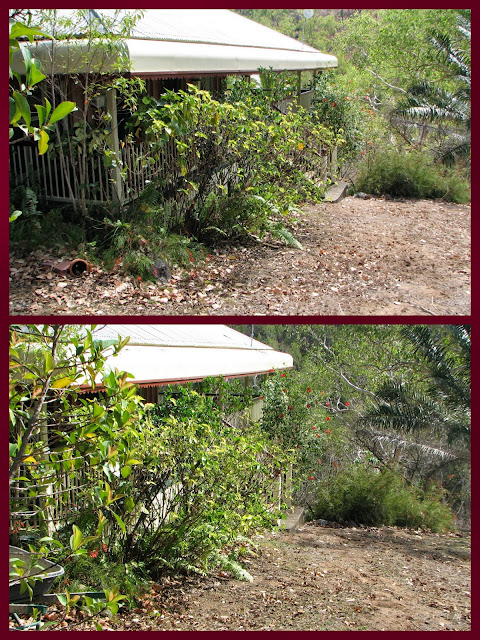 As you can see from the collage above, not much has changed around my place since my last journal post, back in August.   Most of the garden bed plants remain in survival mode, trying to get through the dry conditions the best way they can.  Quite a lot simply drop most of their leaf load in order to conserve energy, and apart from the tough reliable Hibiscus and Russelia, there are not many other garden bed plants that are covered in blooms right now.

There certainly is a single flower here and a couple of flowers there, if you look closely and don't blink!  That's the nature of gardening in the tropics, as we have flowers somewhere in the garden all year round.  Let's check out what you might spot in the various garden beds around my place.

Starting with the long driveway garden beds that stretch from our front gate down past the pergola that leads to our house ... 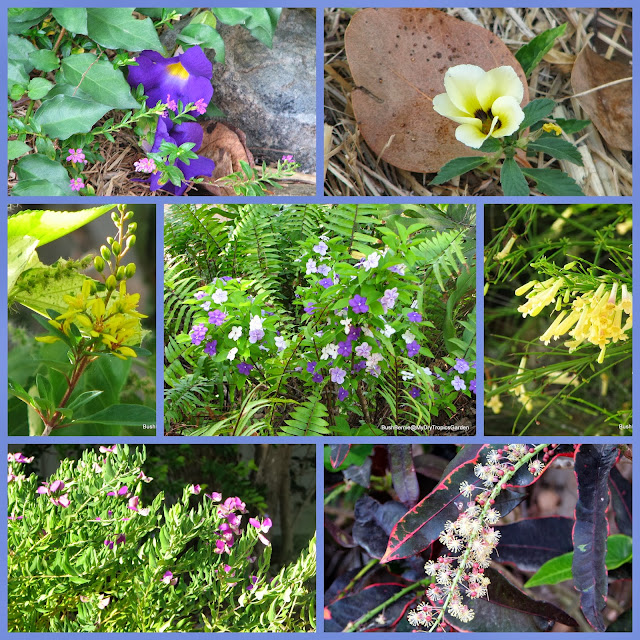 There are a couple of deep purple blooms on my Thunbergia erecta as it starts another blooming cycle for the year.  The Turneras are always blooming, as are the creamy yellow Russelia juncea and the Galphimia glauca.  Underneath the Cadaghi Gum trees, my Brunfelsia has been blooming, but is now at the end of its springtime flowering period.  A couple of the Crotons have started throwing out their long flower sprays, and my Polygala has just started another flowering cycle. 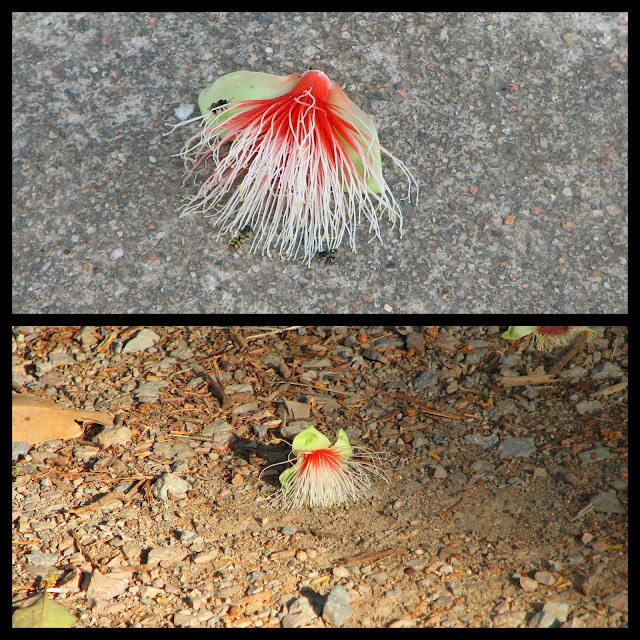 As you wander along the driveway you might notice some unusual flowers wilting and withering on the ground beneath your feet in a couple of places. 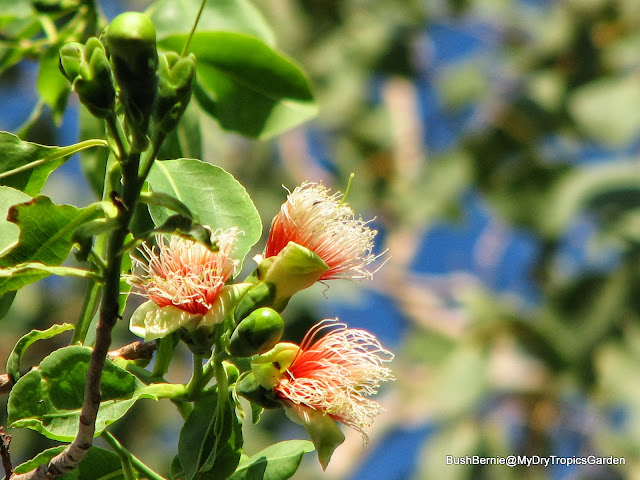 These are the blooms of our native Planchonia careya or Cocky Apple tree.   These flowers can only be seen on the branches of the tree in the late evening, overnight and very early in the morning.  The fall off the tree as the sun comes up.

Now wandering on down to the tiered garden beds outside the shadehouse ... 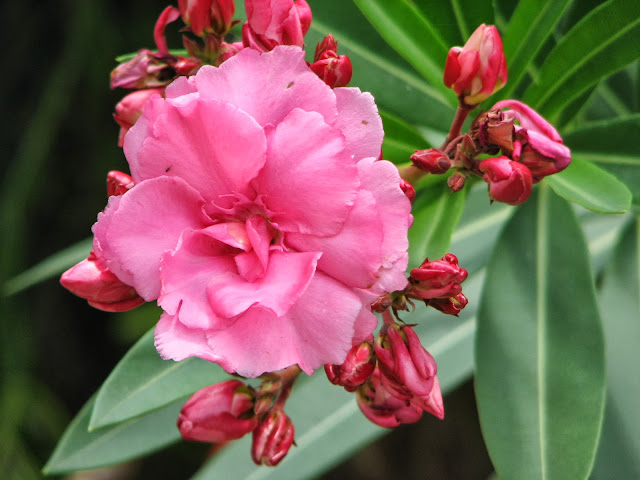 The very first flower spray has appeared on the Oleander I planted late last year.  I'm loving the colour.  I think I'd call it 'cerise'. 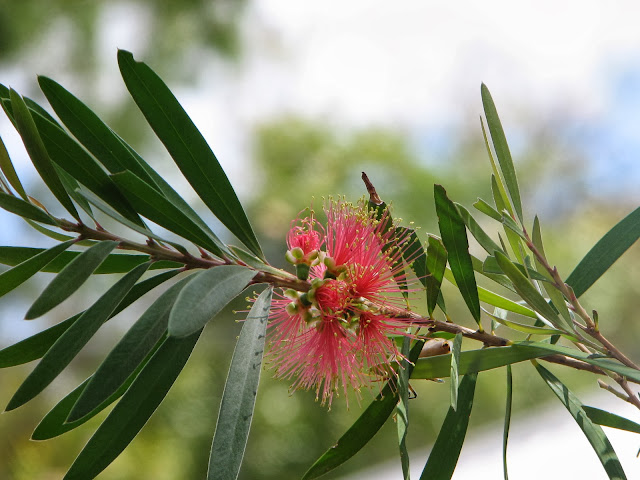 The very first bloom of the spring flowering cycle has appeared on my Callistemon 'Pink Champagne'.  The Sunbirds found it almost the moment it started to open. 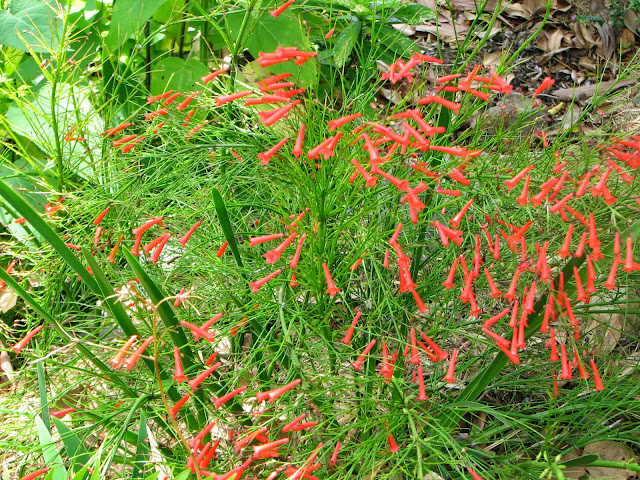 The clumps of Russelia juncea are always blooming.  I'm so pleased to see the Sprekelia formosissima starting to really establish itself in this section of the tiers.  It's taken its time, but it looks pretty happy now in amongst the arching stems of the Russelia.  I'll just have to make sure that the Sprekelia doesn't get overtaken by the Russelia.  Actually I haven't seen any flowers on the Sprekelia since late Spring back in 2010, so I'll be keen to see if it does bloom this year. 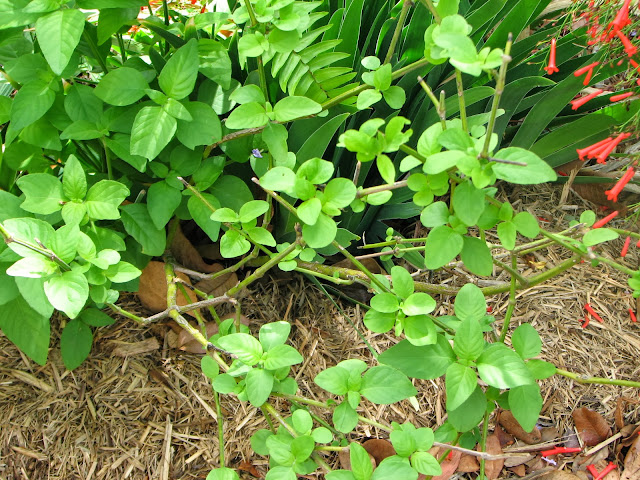 The poor Justicia brandegeana is making a come back after being eaten almost to the ground by hordes of hungry Agile Wallabies during the dry.   I've been missing its wonderful flowerheads. 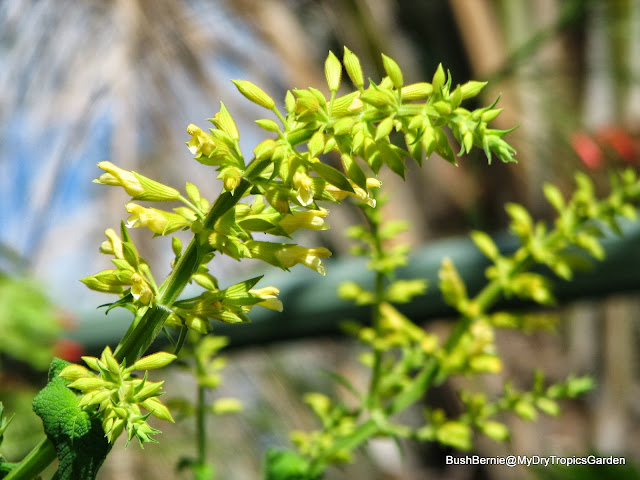 My sprawling Salvia madrensis is showing the first two flower spikes of its springtime flowering cycle.  It always puts on a great show in late Spring / early Summer. 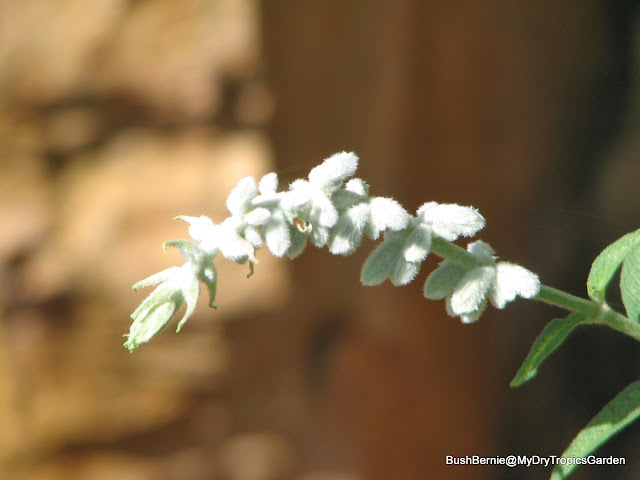 There are two little flower heads on my Salvia leucantha 'White Velour' as well.   It's been slow to establish itself in the bottom section of the tiers, but it's still there and still showing the occasional bloom. 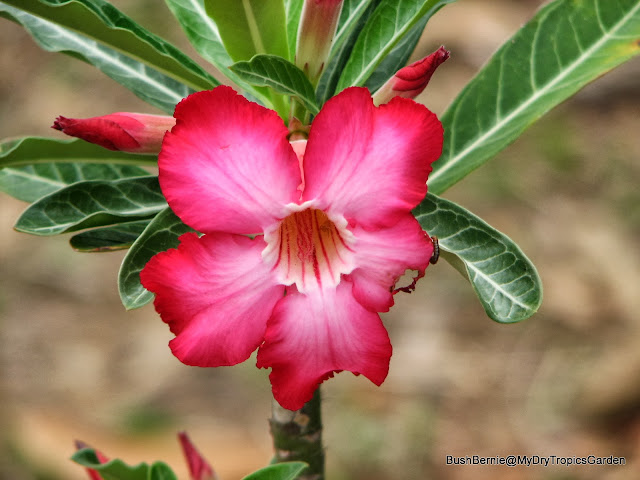 The Adeniums are both blooming at the moment.  They're still quite young and one has remained very small, but both are putting out these brilliant flowers. 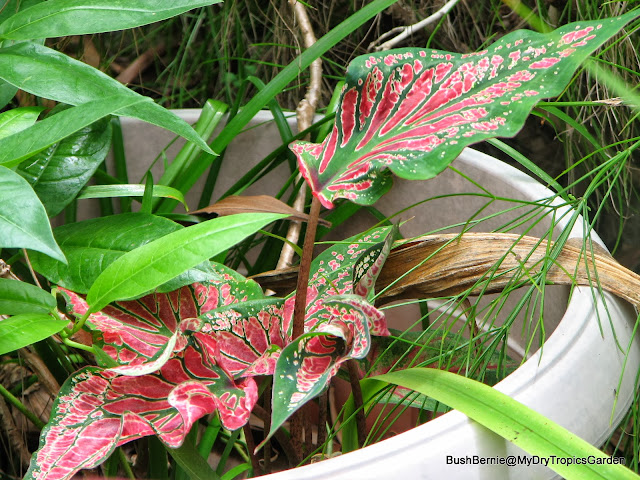 The Mandevilla 'White Fantasy' has taken a long time to come back from its destruction by some unknown wild creature, but they are some stunning little Caladium leaves popping up in the pot just to cheer me up. 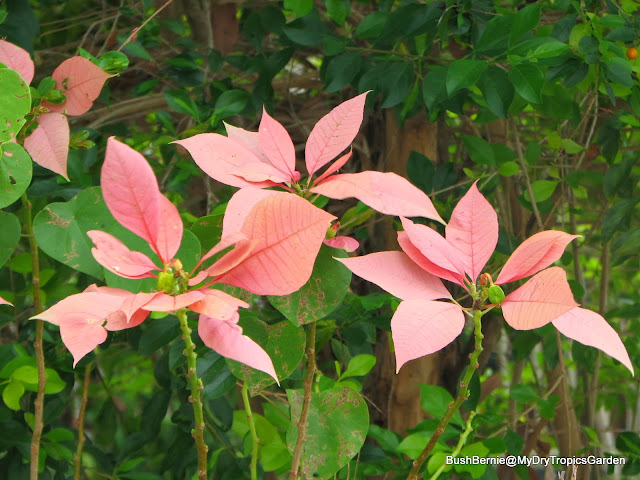 The very last fading bracts of my Euphorbia pulcherrima are still hanging on, but they really do look past their prime now.

Now let's pop into the shadehouse garden nearby to see what's going on in there. 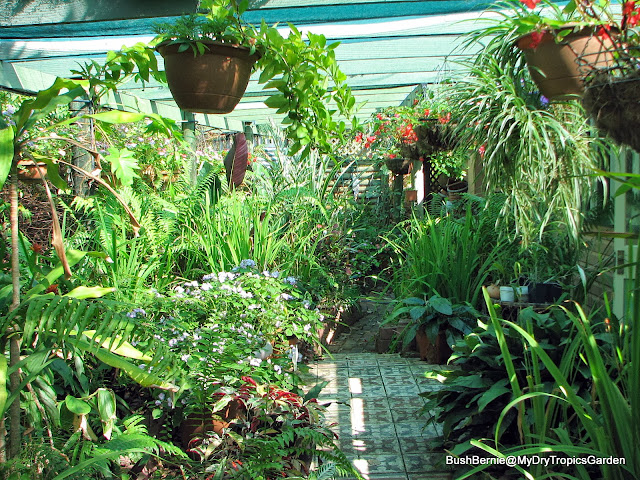 Again, not much has changed over the last few months.  The hanging pots and standing pots of Impatiens walleriana continue blooming, as do the hanging baskets of Dragon Wing Begonia. 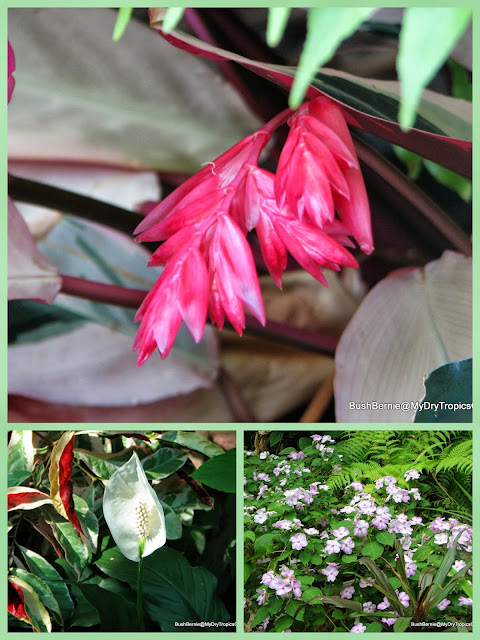 The Stromanthe has bloomed, and the first spathes have appeared on the Spathiphyllum.  The large pots of Impatiens that are standing on the tiled area have become a haven for an army of mealy bugs.  I've had a hard time trying to control them ... and I'm losing that battle.

One truly terrific surprise this year out in the shadehouse has been the appearance of the first flowerheads on my Indian Rope Hoya. 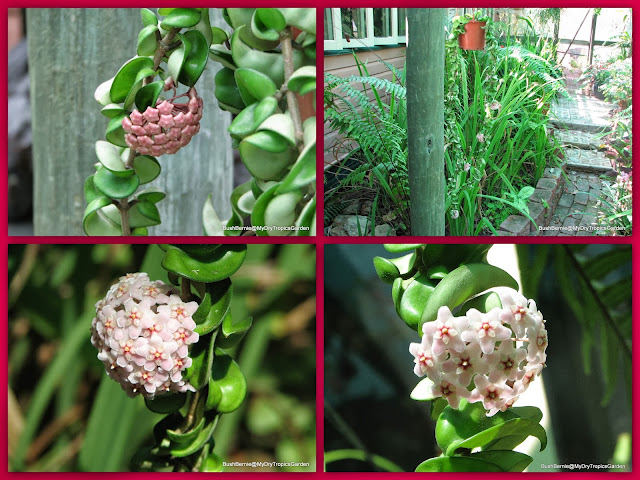 Six corymbs or balls of porcelain-like flowers opened up on the long penduncles at long last.  It's been a long wait, but well worth it.  It's such a special sight.

Now walking out through the other end of the shadehouse, onto the courtyard garden, you would spot quite a few little flowers amongst the various potted plants. 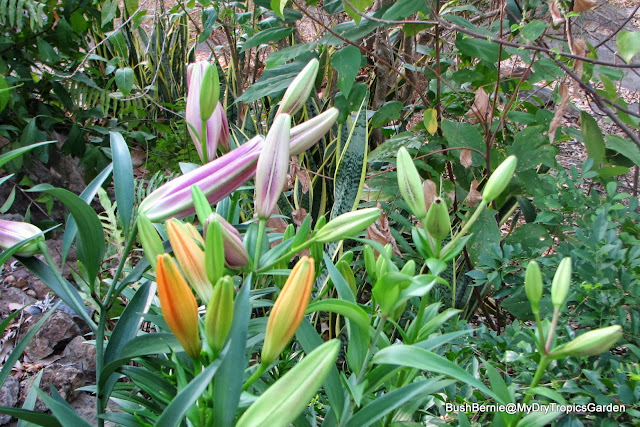 The mixed pack of Liliums I ordered and planted up back at the end of July, began to show flowerheads in late September, 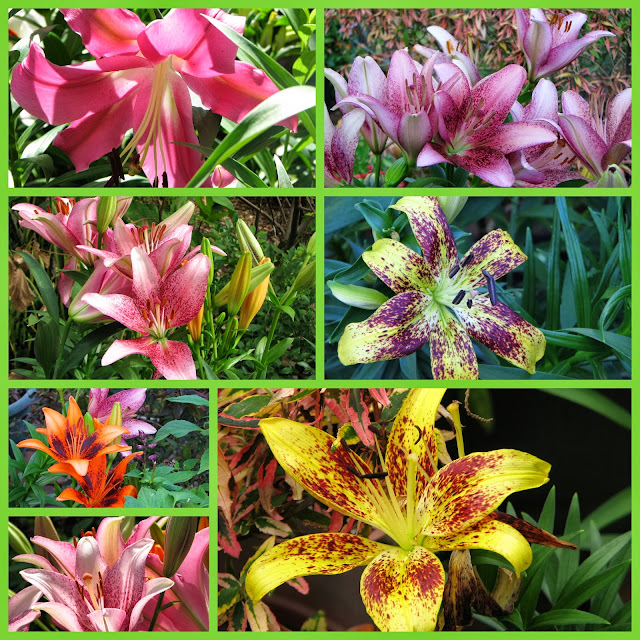 and I've been enjoying the flowers since the beginning of this month.   I think I'm a dyed-in-the-wool Lilium fan now, and I'm going to have to have a few bulbs every year.  I haven't quite figured out what I'm going to do with the bulbs once they've had their hey-day.  I haven't had any luck getting many of them to come back and re-bloom the following year.  I get a few little leaves pupping up, and maybe a stem of two, but that's about it.  I need some suggestions about that. 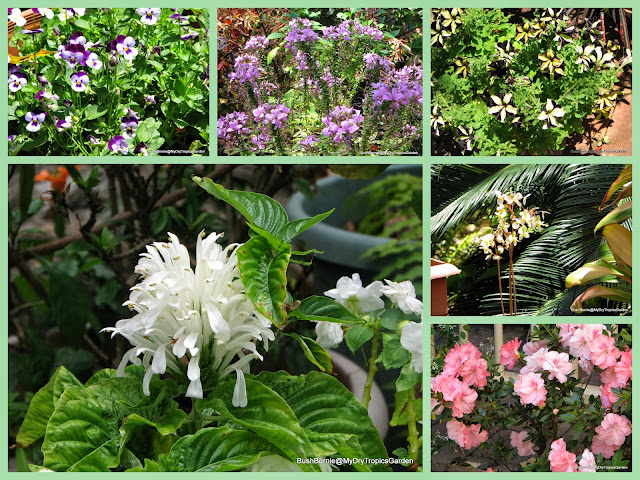 Other blooms you might notice in the courtyard include Violas, Cleome spinosa, Petunias, Begonia, Azalea and the first plume of the new flowering cycle of my white Justicia carnea.

I purchased a few more Hemerocallis along with the Lilliums at the end of July.  They've been growing in pots out in the courtyard while waiting for a new spot in the soon-to-be-completed garden beds. 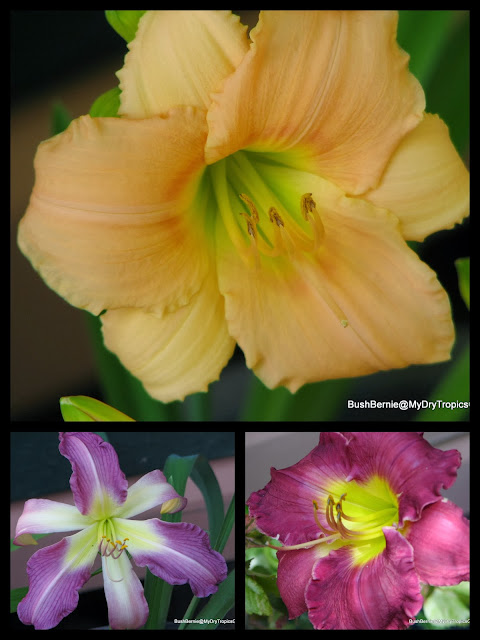 Let me introduce Hemerocallis 'Tootsie' at the top, 'Taken By Storm' at bottom right, and I think it's 'World Class Oddity' at bottom left. 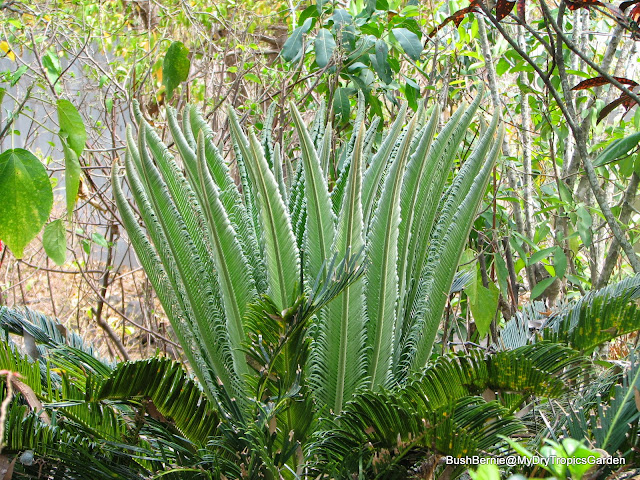 Blooms aside, one other little treat out in the courtyard garden is the appearance of a new flush of growth, called 'breaks', on both of the Cycas revolutas.   I am always fascinated at the progress of this new growth.

So that's a pretty good round-up of what's blooming at the moment.  The conditions here had started to warm up, but with the showers of rain hanging around in the last couple of days, we've had some very pleasant days and cooler evenings of late. I'm not looking forward to the coming Summer as the predictions are for a very long, very hot one, and of course, that's when cyclone season rolls around once again.

Anyhoo ... one thing I would like to share, before I finish up my post, is the progress on my new garden beds.  My dear sweet husband has been slaving away in his spare time trying to get the new shed erected and the garden beds built as quickly as possible, given that he hasn't had a whole lot of spare time over the last few months.  Anyway, they're finally finished, as off this morning.

This will be my new Daylily and Desert Rose bed, I think.

I rather like the colour choice on the blocks.  I think dear OT did very well with that decision.

This end section is going to need shrubs, shrubs and more shrubs.  Big shrubs, little shrubs.  I haven't made up my mind yet.

The new section of garden bed that sits next to the shadehouse garden is going to be filled with Cordylines, Gingers and other tropical beauties.

I've been looking forward to transforming this rather bleak part of the place for ages now.  It's really going to make the entrance to the house look so much better.

It's been a mammoth effort by my OH and I'm really pleased with the end result.  I've started adding some gypsum to break down the clay soil around the shed area, and topped that with some manure.  Soon it will be time to shovel in some hay mulch and compost, and top up with some good quality soil.  The section near the shadehouse still needs a little bit of finishing off, and then I'll start the same layering procedure in there.  I've been accumulating a few plants to add, but I will wait until just before the wet season to actually plant them.  That way, they will get a good head start to their growing and establishing period.