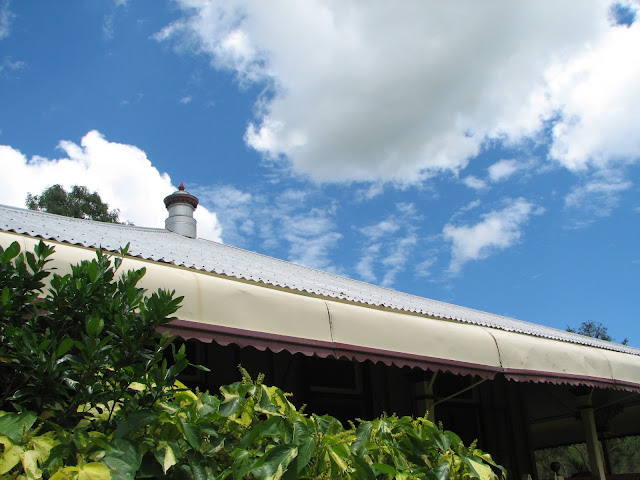 More sunshine today … and it lasted all day long! What a treat! Yes it was hot, steamy and downright horrible outside … this is Summer downunder, after all … but it was so lovely to see the sun. When you’re used to sunshine for at least 300 days of the year, and that doesn’t happen, you start to pine for that great golden orb!

Anyway, enough about the sun. It was a disgusting 32 deg C (90F) in the shade today … humidity up around 70% and the UV index was registering Extreme. NOT the ideal conditions for working outside in the garden.
But I spent time dragging out all the potted plants that are at the far end of the Courtyard Garden to assess their health after the long period of rain we’ve had this Summer. They’re not looking all that great … not enough sunlight! 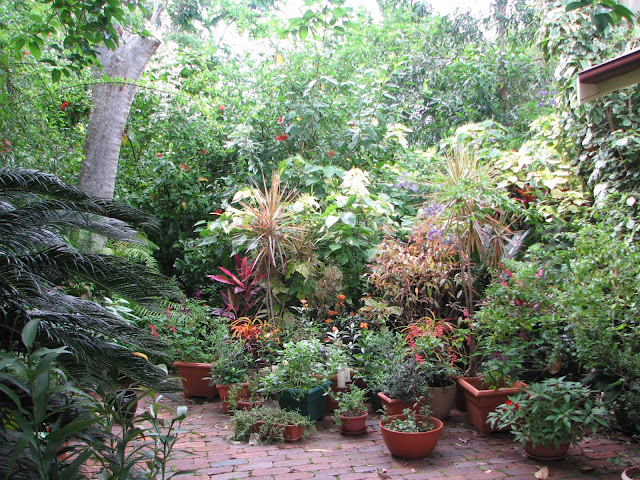 ... another set beside the pond and pergola area ... 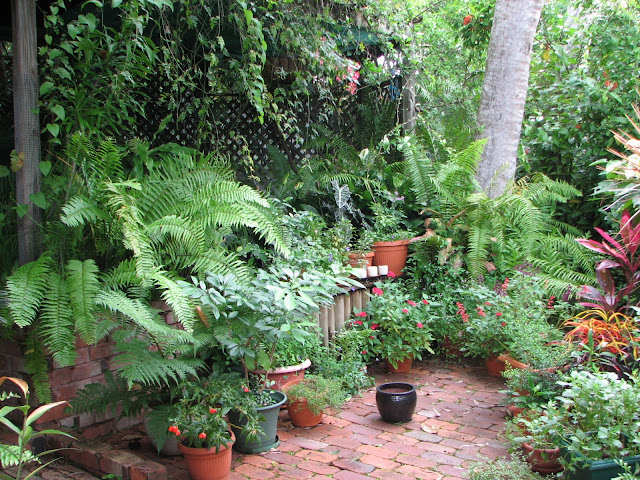 and yet another set near the Fern Alley. 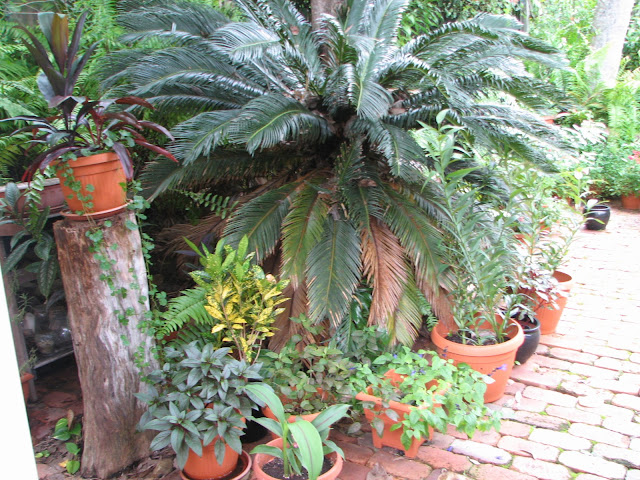 There are more pots out in the courtyard but I usually start this job with the potted plants in pain.

So here’s the post mortem:
•  I’ve lost some of the Torenias, need replacing … simply can’t do without them!

•  The Salvia splendens are definitely leggy and need cutting back … will plant more seedlings in the two pots.

•  The Crossandras are just too leggy now and there’s almost no sign of their striking orange flowers … they   need cutting back and feeding.

•  The New Guinea Impatiens have made it through so far, but they’ve dropped all their blooms and need a good feed.

•  The Cordyline ‘Red Wings’ and ‘Morning Sunshine’ need to be potted up together and placed in the shadier section so they don’t continue to get sunburnt.

•  The Tree Fern needs to be moved as its outer fronds are getting singed by the hot sun.

•  I need more Gomprhena globosa (Bachelor Buttons) in those big round bowls as they seem to have come through very fairly well.  Have seeds for those, so need to get them started.

•  I should move the Euphorbia ‘Diamond Frost’ out where it can get more sunlight as it’s not floweirng as profusely anymore.

•  I should also move the Wrightia so it can be in full light.

•  The Dracaena marginatas need re-potting … could perhaps pot them up with the Acalyphas as they need something else of interest in the pots.

•  Need to trim back the Duranta repens.

•  Need to move the Seaside Daisies to the stairway for more direct sunlight … they haven’t flowered out in the Courtyard.


Oh boy … I’ve got some work to do! I will need to get more potting mix and pots! But, when I’ve done this bit of work, then I will think about adding more colour to that section of the Courtyard Garden. 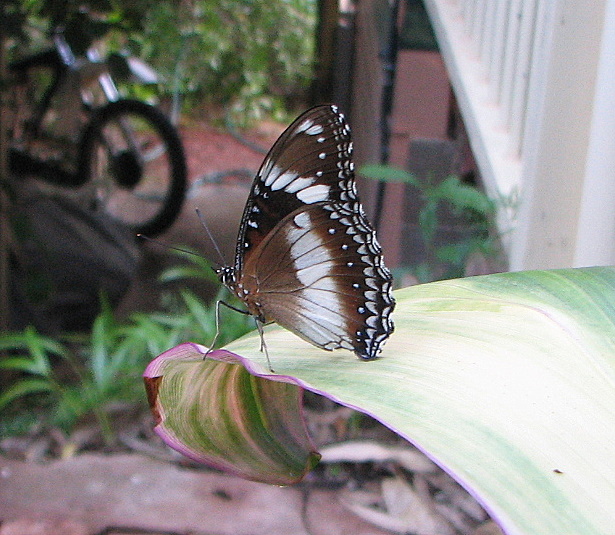 One of the many flutter-bys who were watching me as I worked. 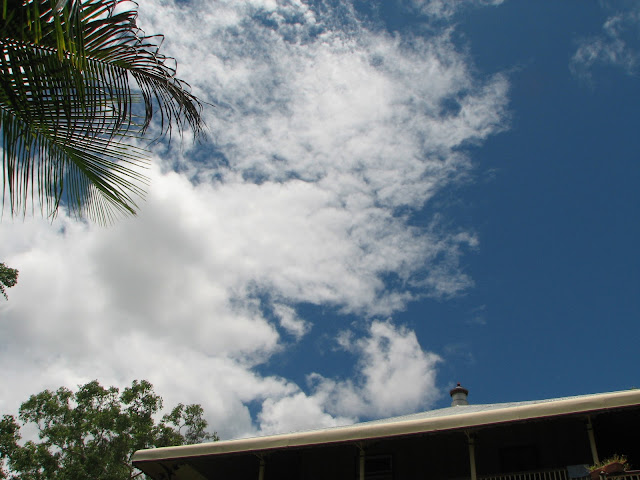 Lovely sunshine again this morning ... after a thunderstorm rolled around the hills in the late afternoon yesterday and more showers of rain last night.  So I headed back out to the courtyard to continue the cleaning up the end of the Courtyard Garden.

I had already dragged all the potted plants away from their usual positions at the end of the Courtyard Garden to get a closer look at just how they had come through the early 'wet' season.  Today it was time to do some trimming! 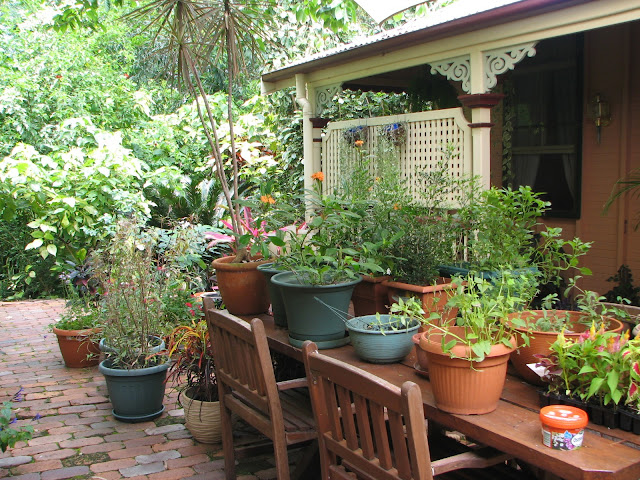 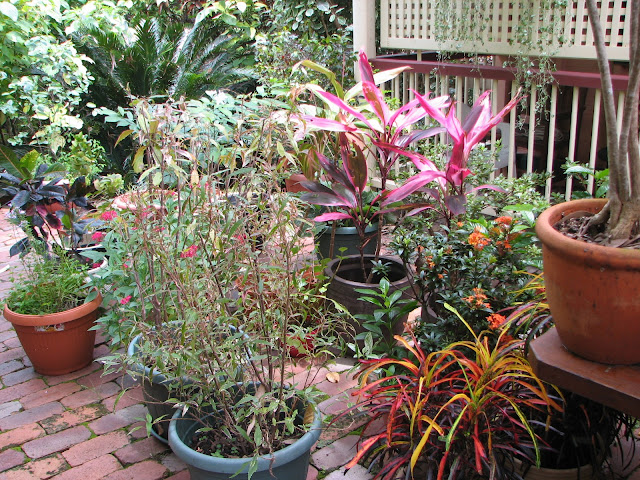 Then it was time to do some moving! 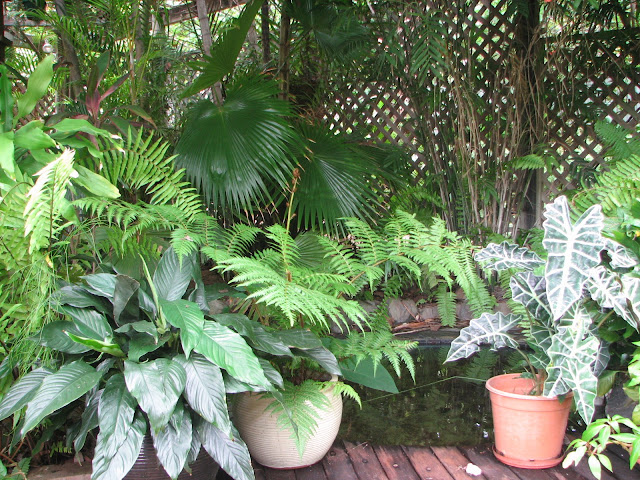 Then it was time for fertilising with Power Feed.  All the potted plants have gone without feeding for several weeks now because of the rain ... not only was it difficult to get out to do this job, it would have been rather futile anyway as the fertiliser would have been washed out pretty quickly with the heavy rainfall.
While I was busy feeding the collection of potted plants out in the courtyard I swear I heard a collective murmur of appreciation!  I thought the hanging and potted plants in the Shadehouse Garden would also appreciate a fine feed, so I added that to the list of things to do today.

So ... job done for today.  All trimmed, fed and ready to be re-potted where necessary and re-organised around the courtyard.  That's the next job! 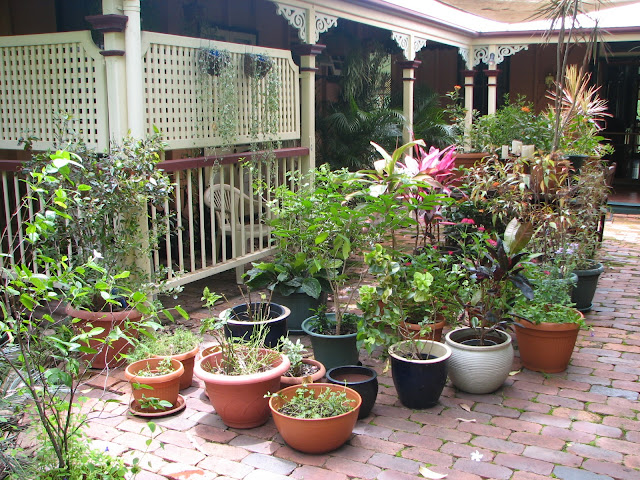 Trimming Back and Ripping Out in the Shadehouse Garden - My Downunder Dry Tropics Garden Journal - Week 1, 2011.

Today actually began with sunshine ... so rare this Summer!  Finally, that bright golden orb made a welcome appearance and not only that, the sky was blue ... and filled with lovely puffy white clouds.   The Garden and I were so sick of pale dull grey!   OK ... there were a few dark clouds looming, but upon spotting those golden rays, I was determined to get out into the garden this morning. 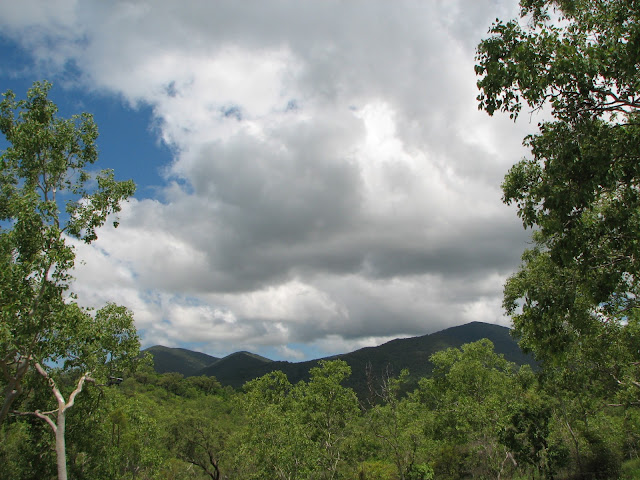 I headed out to start the clean-up in my Greenhouse/Shadehouse Garden.  It's been weeks since I've been able to get out there ... weeks of endles dreary grey skies, drizzling and sometimes driving drenching rain, as well as thunderstorms and lightning. The Greenhouse/Shadehouse Garden was a veritable jungle! You needed a compass and a survival pack to make it back to the house if you ventured out into it!


The almost constant rainfall all throughout our Spring and early Summer has resulted in the Giant Sword Fern becoming almost gargantuan and not just giant! Each fern frond can reach two metres in length during the Summer 'wet' season and the other plants get swallowed up! 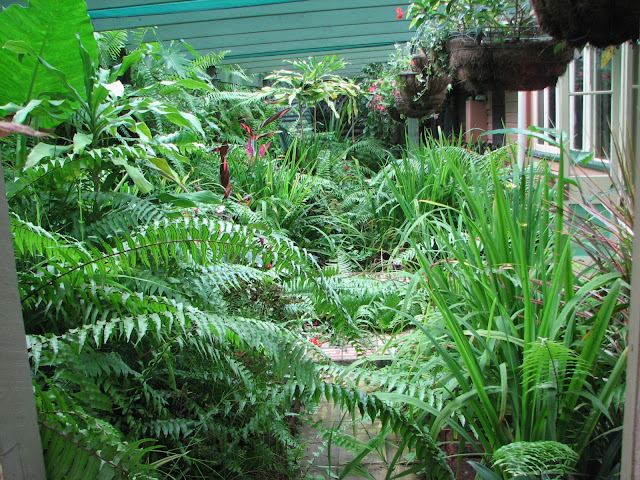 So, out I went this morning and spent quite a while trimming back that overgrown jungle.   I actually enjoyed it!

Well I began by trimming back all the Dragon Wing Begonias in hanging baskets, as well as the Barleria, the white Begonia semperflorens and the ivy Pelargoniums. The hanging baskets were so saturated that when they were moved slightly, water would drip from the bottom of the lining.  All the plants got a 'short back and sides' trim ... it's rather severe but so necessary. 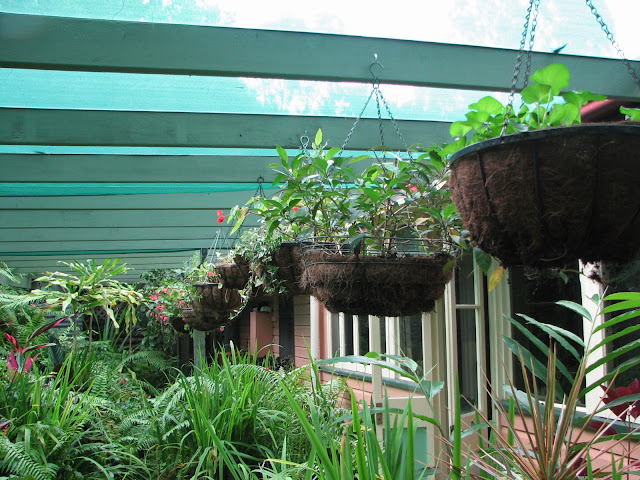 Next I began to mercilessly hack at loads of Nephrolepis biserrata (Giant Sword Fern) and Neomarica longifolia (Yellow Walking Iris).   This is the pile about halfway through the clean-up. 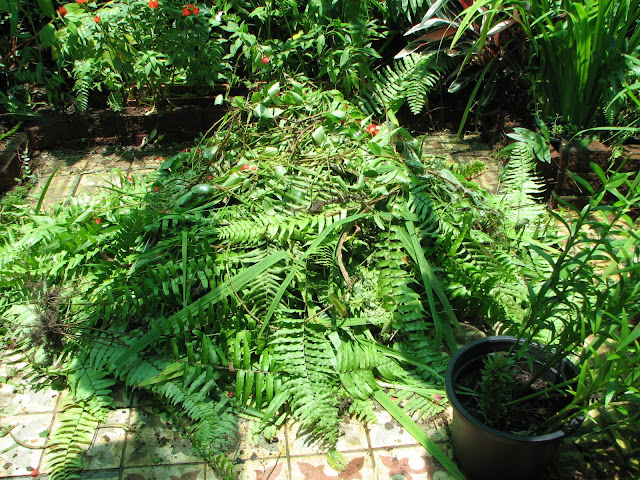 At last, after all the trimming back I could now use the pathway again ... and I could now access the potted plants that were scattered in amongst all the foliage of the ferns and irises.  I trimmed back the Inky Fingers Coleus, New Guinea Impatiens, Dragon Wing Begonias, the various other Coleus and Hypoestes. 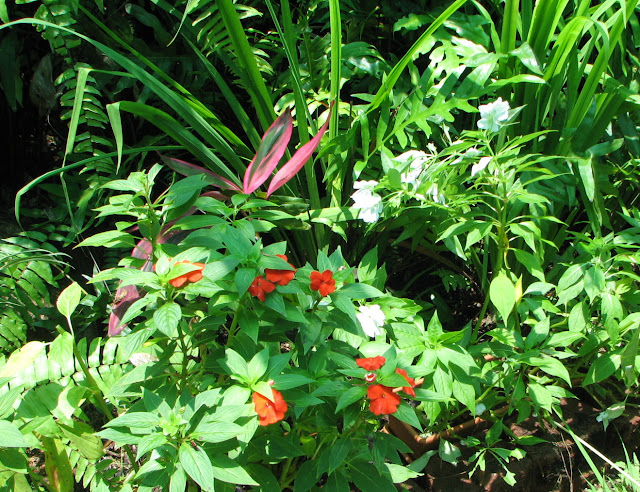 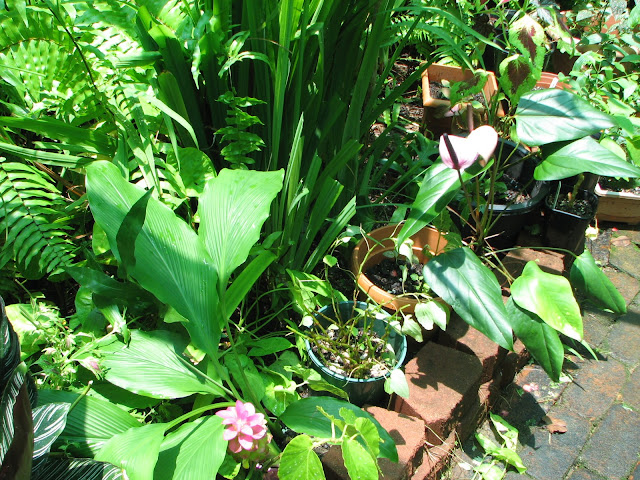 Now I can move about the Greenhouse/Shadehouse once more without getting lost in amongst all the Neomarica and Nephrolepis.  Aren't they fabulous words!!! 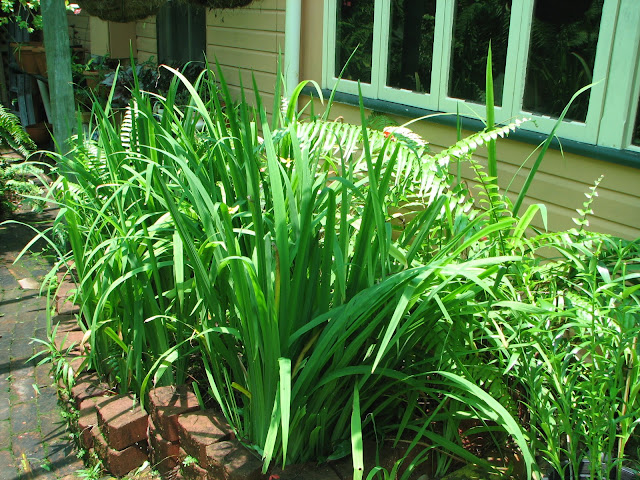 My final job was to move all the pots of newly propagated plants into patches of sunlight ... Stictocardia, Hoya, Streptocarpus, Shrimp Plant, 'Frosty Pink' Brugmansia, Gloriosa Lily, Begonias and Bromeliads. 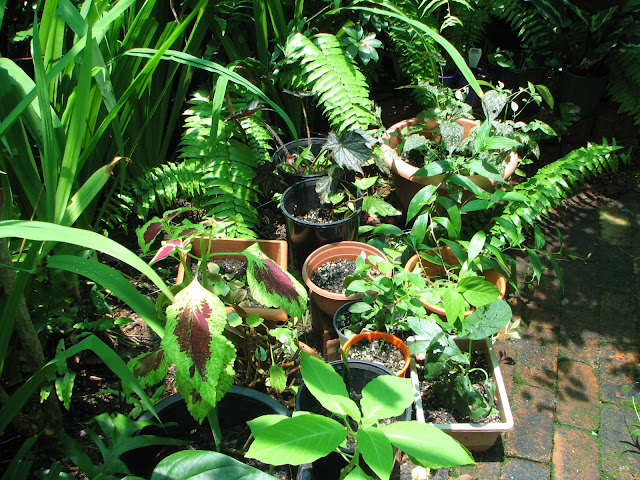 I swear I heard whoops of joy from them all!!!  They have been craving decent sunlight for a while now.  I think I also heard cries of ecstasy from all the plants released from their ferny prison ... they could once again feel the sunshine on their leaves. 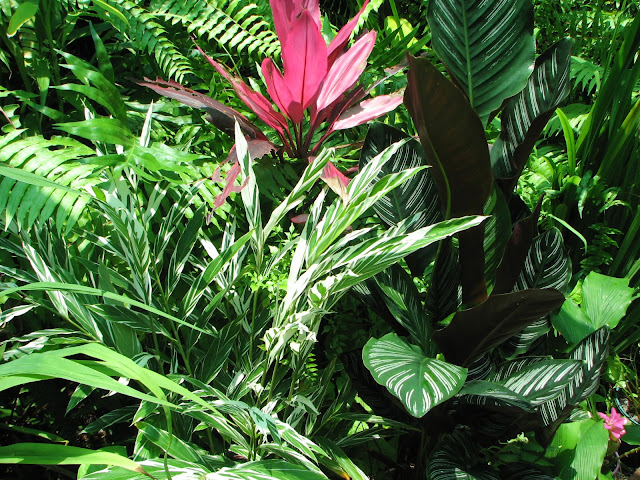 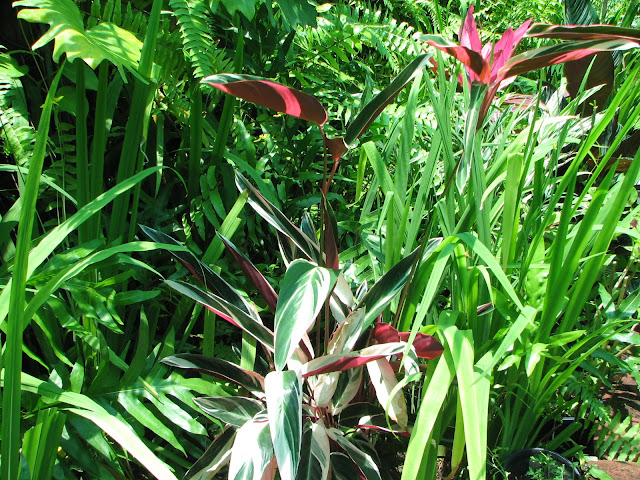 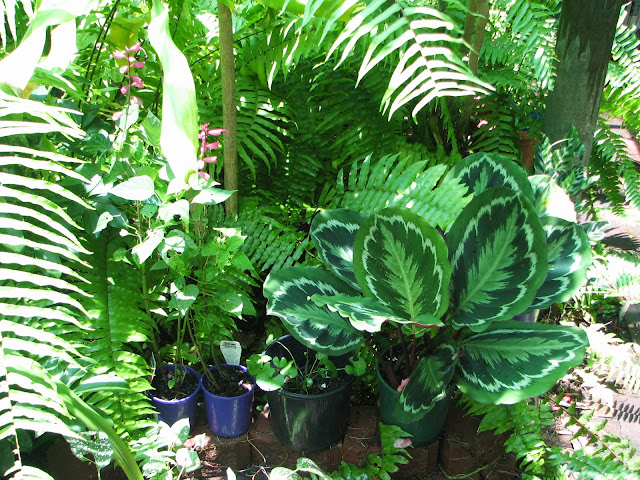 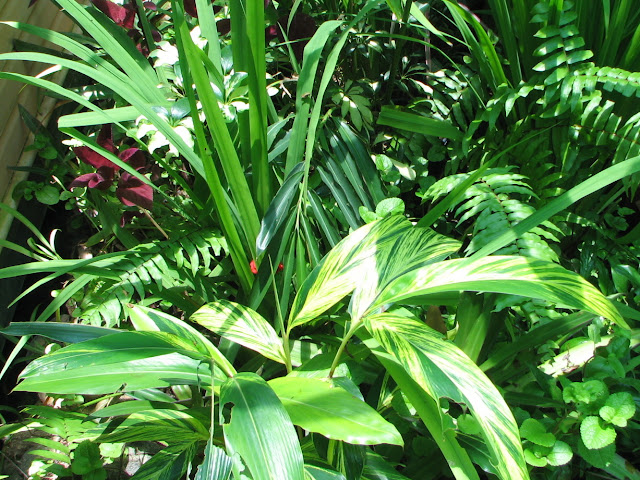 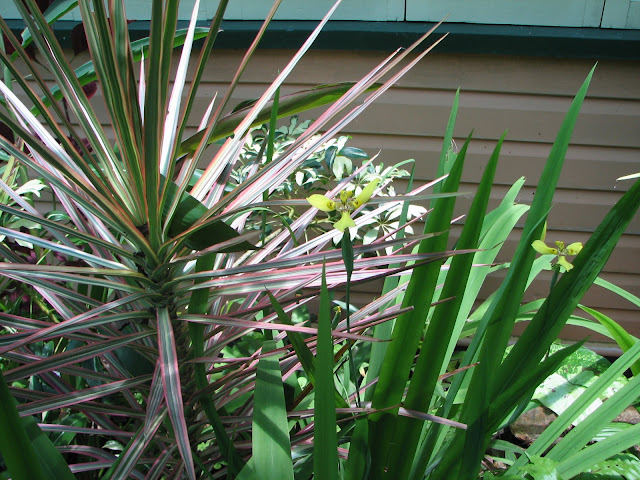 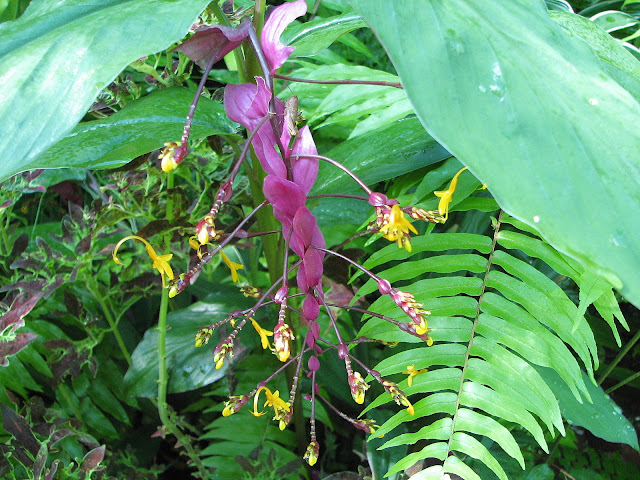 
As I write this blog it's now afternoon and the clouds have covered the sun once more.  There's a forecast for thunderstorms and rain again this evening, but I'm felling so good after getting down and dirty at last, that even that can't wipe the satisfied grin off my face!

TO DO:
Must trim back Giant Sword Fern growing around the hanging pots of Impatiens walleriana. 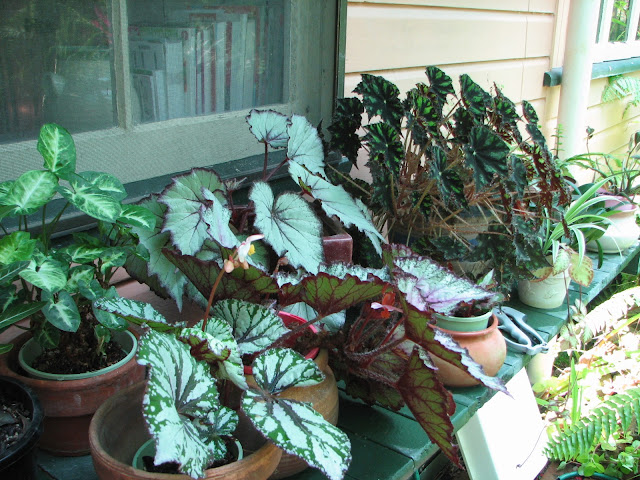