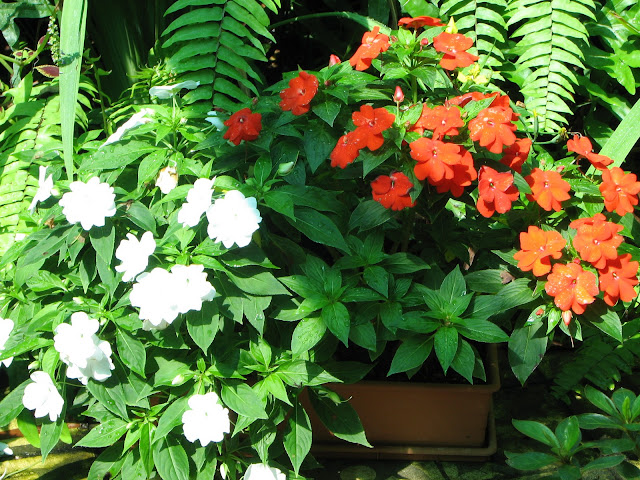 New Guinea Impatiens - Impatiens hawkeri - are one of my all-time favourite perennials.  They are so well suited to my dry tropics garden.  They're definitely sun-lovers, but many people are fooled into believing they can take full sun all day ... that is certainly not true here in the tropics.  During our fierce Summers, they will wither very quickly if subjected to a full day out in the blazing sunshine. 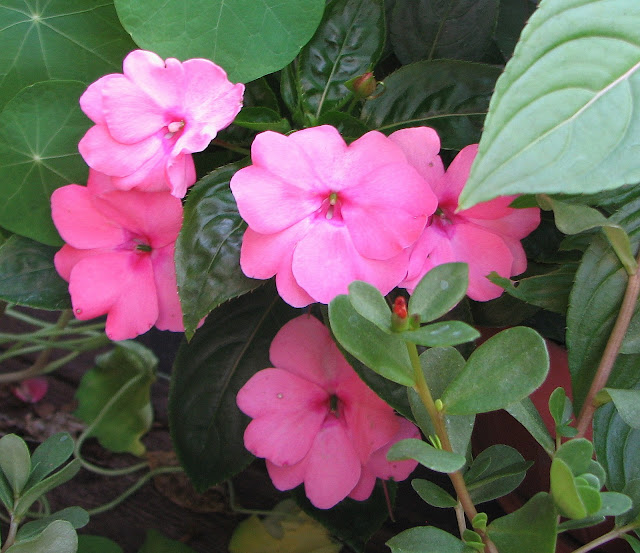 Yes it is true they are far more sun-loving than the other Impatiens species, such as Impatiens walleriana, but in my dry tropics garden during Summer, I have New Guinea Impatiens in positions where they can only enjoy direct morning sunlight.  In the Autumn-Winter though, they will sit out in full sun all day quite happily, as long as the roots are kept moist! 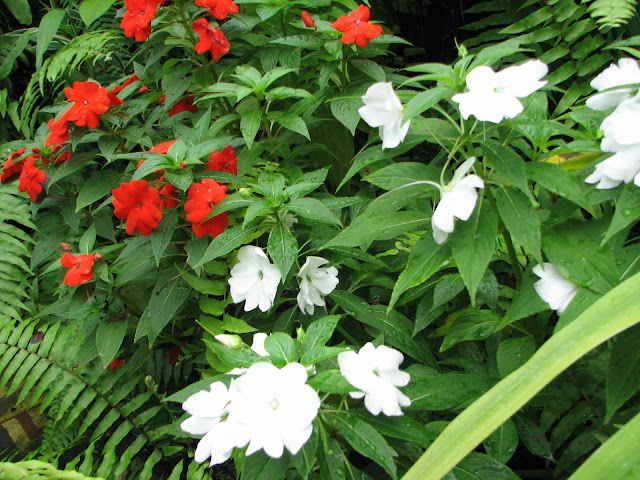 They form tight compact little bushes to around 45 cm in height and have great lance-shaped leaves that can vary from dark glossy green to bronze, and variegated as well. 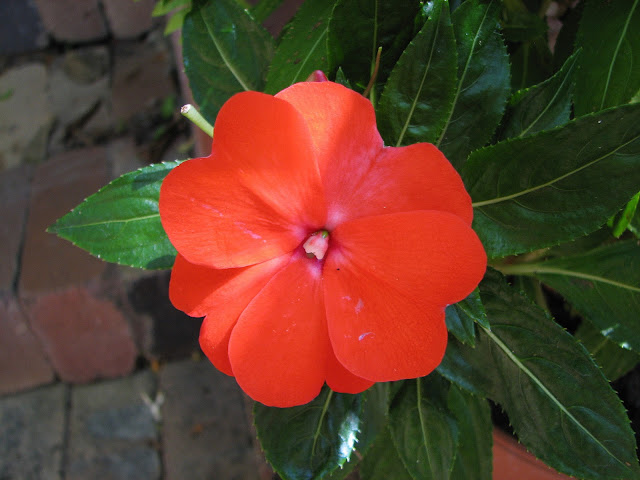 They will flower continuously throughout the warmest months here, from late Spring right through to Autumn.  The single flattened flowers come in an amazing range of colours such as whites, pinks, reds, mauve and coral.  Sometimes the flowers can be up to 7 cms in diameter!

My favourite is definitely the white which really brightens up my Shadehouse Garden. 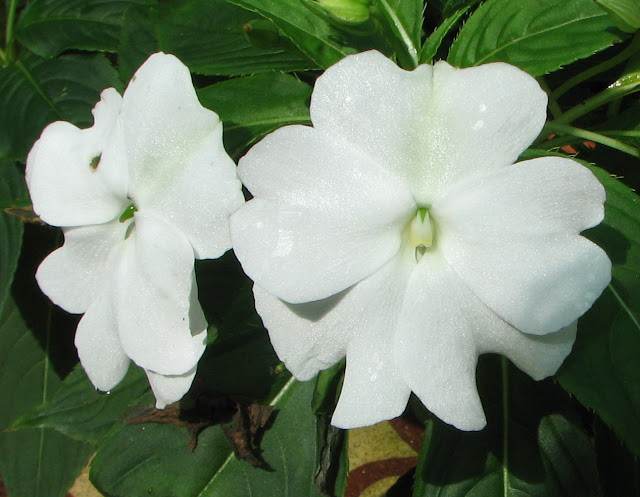 The red and orange Impatiens hawkeri have their own beauty though. 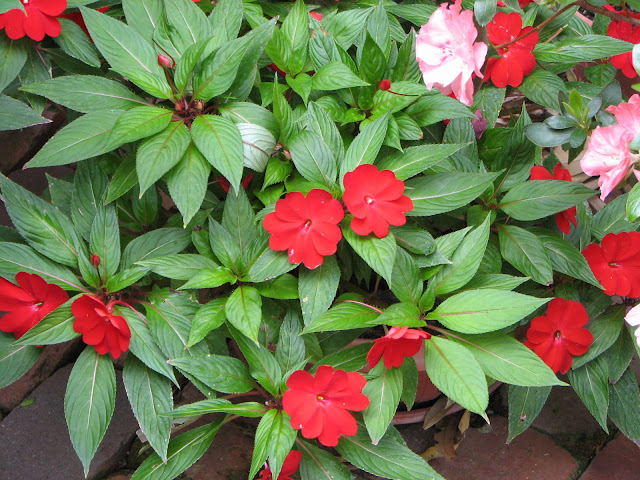 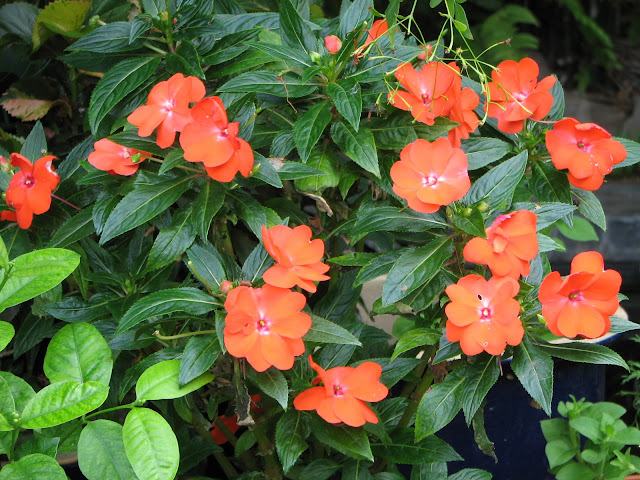 Some of the new cultivars have deep dark red veins running through the dark leaves and this makes handsome looking foliage. 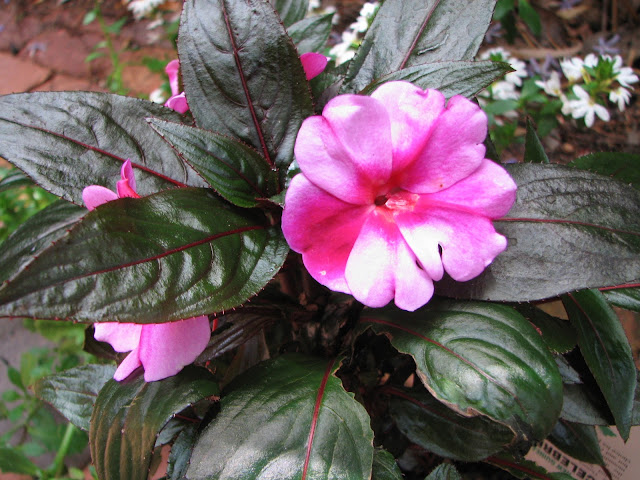 They may also have fabulous variegated leaves with these dark red veins ... 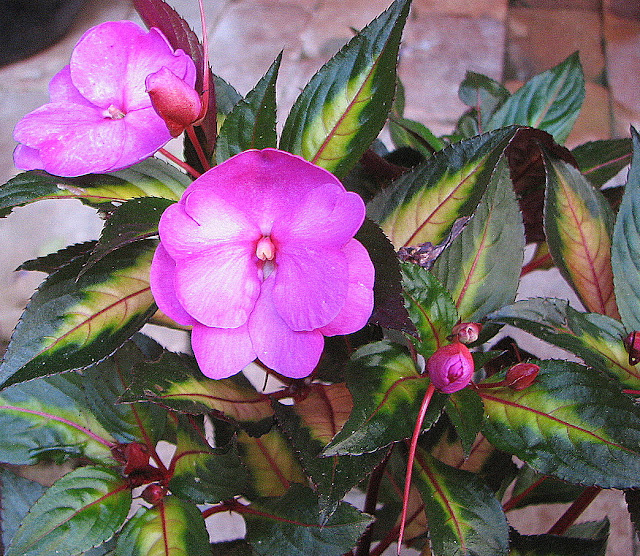 ... and have lovely two-tone flowers. 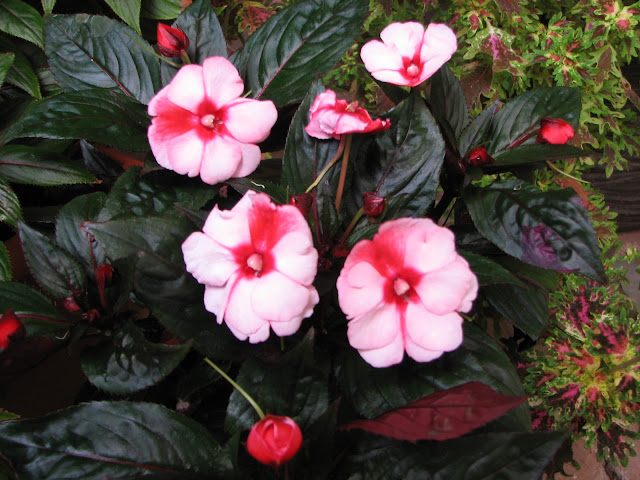 All my New Guinea Impatiens are in pots and are almost fuss-free plants in my garden.  I do have to take care with the watering, however.  They require a moist, well-drained soil.  Too wet and they will rot ... if they dry out, they will wilt quite badly!  Now while the wilted plant will recover quickly after watering, it's already suffered stress and will often drop all the flower buds and so have less flowers.  The leaves will also often drop and/or turn brown around the edges.  My potted New Guinea Impatiens love to be fertilised quite regularly with a water soluble fertiliser ... I always put some slow-release fertiliser in the potting mix as well. 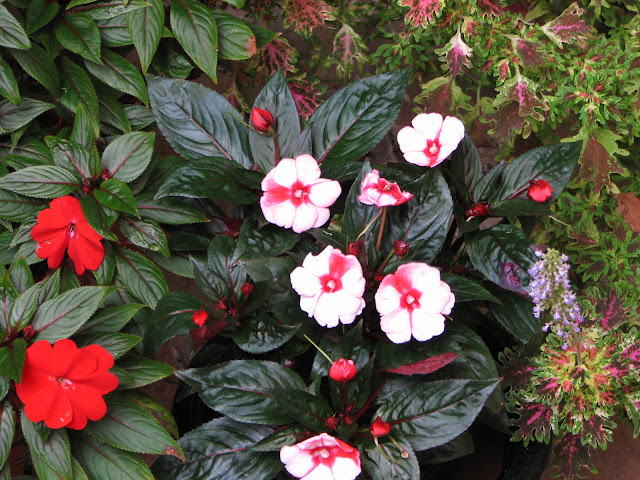 Snapshots of mid-Spring ... which is October ... in my garden.

I began a 'Snapshots' post back in mid-Autumn and at the time I was planning to make it a regular part of my blog ... and then completely forgot all about it!!!  Rather typical of me ... but I like the idea I had back then so from now on I'm going to stick with it.  I will definitely be making regular mid-season posts about what's going on in my dry tropics garden Downunder.  But first I need to catch-up ... so I'm going to take a quick trip back in time to mid-Spring.

This past October was very different to many we've had in recent years.  It was wetter, slightly cooler and we had many, many overcast days.  There were quite a few days when we received very light showers, but the rain barely touched the ground.  We did, however, have around a week of heavier rainfall and the total for the month got up to around 50mm (almost 2 inches)!  Now that may not sound like much, but in the dry tropics that's way out of the ordinary for mid-Spring.

The weather patterns were almost identical to those I wrote about in  Snapshots of mid-Autumn - the unusual lack of bright sunshine and the missing-in-action clear blue-sky days continued to affect the patterns in my garden.

(Note:  My garden differs from many as it does not contain lots of flower beds or borders.  I feel I need to make this point almost every time I post ... to explain the lack of colourful garden bed shots).

Starting with the trees on our property ... what was flowering? 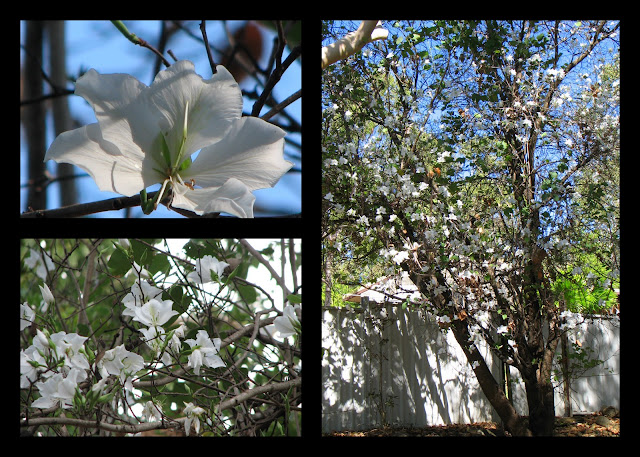 The Bauhinia variegata 'Alba' was still showing a few blooms during September, our beginning of Spring month and then quite a few more appeared during October.  This was definitely not the usual pattern for this winter bloomer. 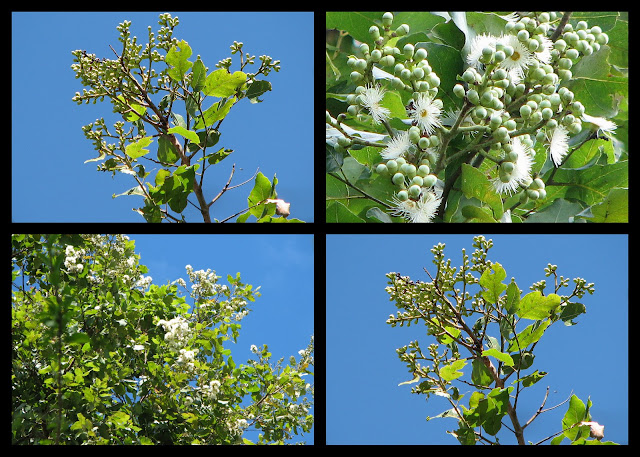 The Corymbia torelliana or Cadaghi Gum was in bloom ... it was blooming on schedule but there were more flowers this year. 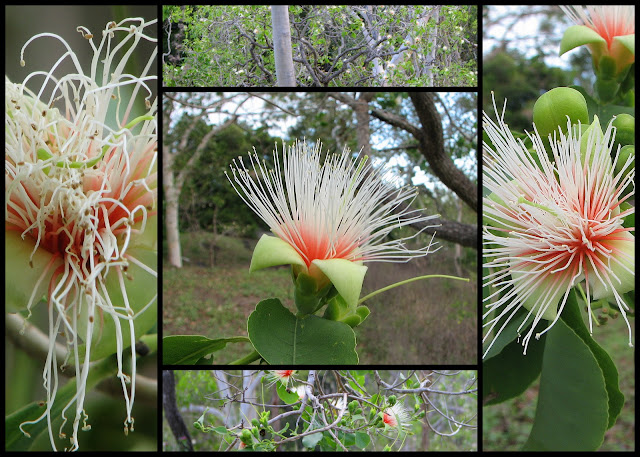 The Cocky Apple trees were blooming up a storm during October.  There are dozens of them in the bushland surrounding our home and there's a couple on the property itself ... and this October there were abundant blooms, more than I've ever seen before.  This is a tree native to our corner of Oz and it's not a tree that's well-known because it has never been cultivated for general nursery sales. 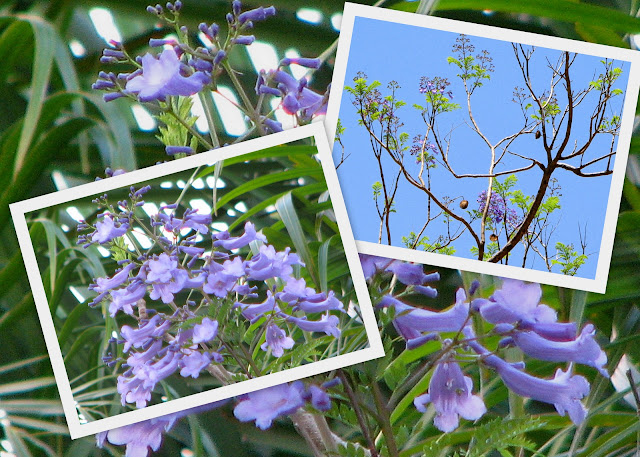 This was the month that my Jacaranda mimosifolia started blooming.  Mine seems to start later than all the others in my neighbourhood ... and it seems to be that way every year for whatever reason!  It's also a very sparse bloomer ... more to do with its location than anything else, I suspect ... but I still appreciate every little cluster of these gorgeous lavender flowers.

Next ... out in the Courtyard Garden, what was flowering?
Lots of my potted plants out in the Courtyard Garden were in full bloom.  I had quite a bit of trouble with some of the annuals this year ... like the Petunias ... as well as the Pansies and Violas.   I think that was a direct consequence of all the overcast dreary days we had ... just not enough sunshine this year. 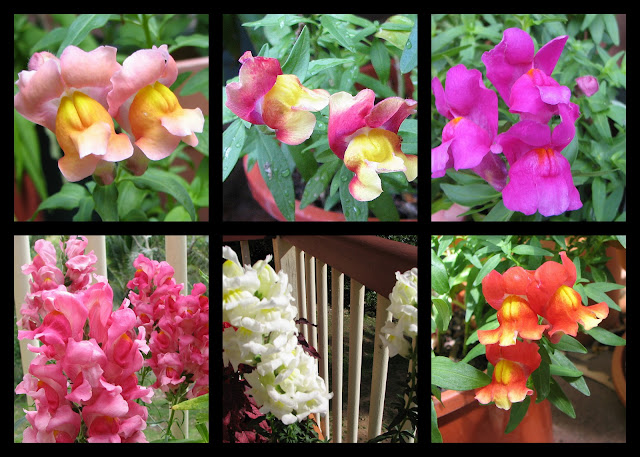 The star performer of all the annuals though, was the Snapdragon. 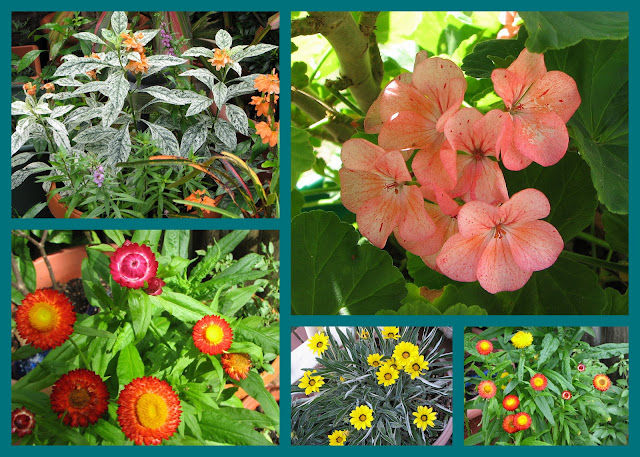 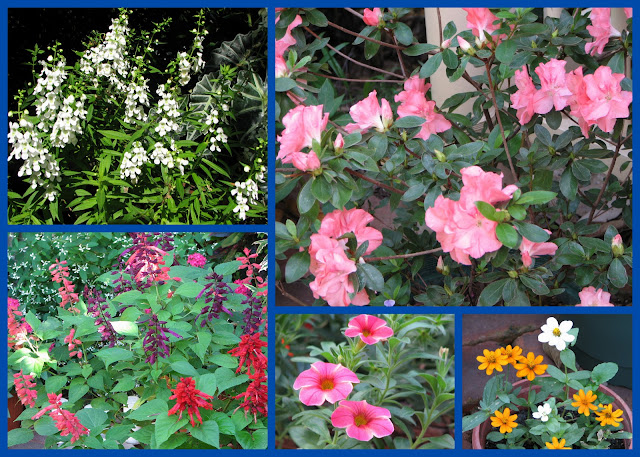 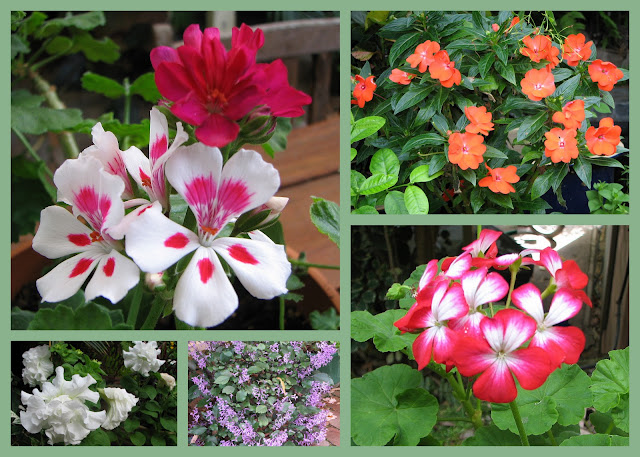 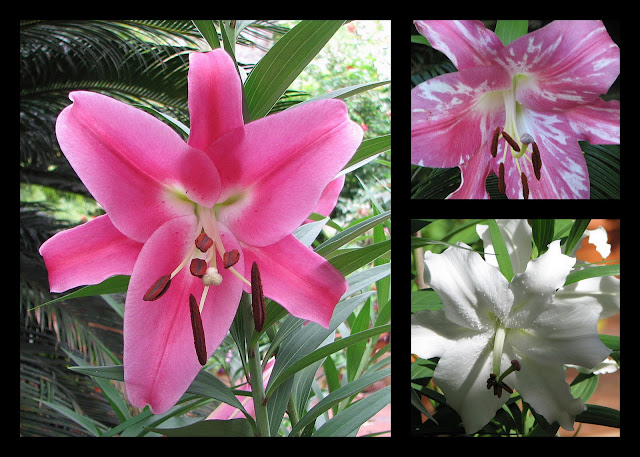 This year I also had a couple of pots of Oriental lilies ... first time ever for me and I was very, very pleased with them.

Now ... which shrubs around the property were flowering? 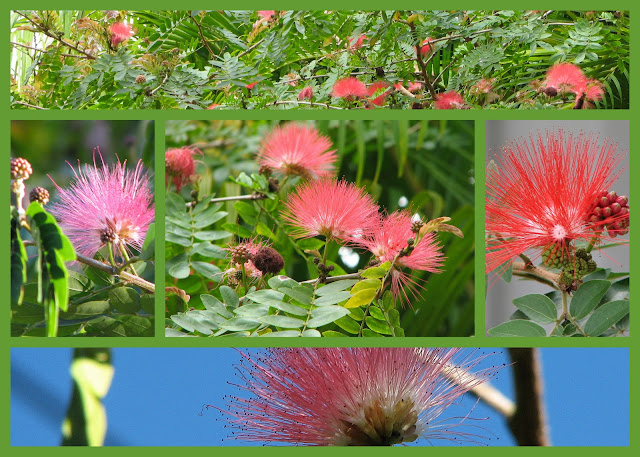 The shrubs that were back in bloom included the Calliandras ... a very strange turn of events.  This year these shrubs bloomed for almost two months longer than they normally do ... there were even a few flowers still hanging on just a week or so ago.  These are usually Winter bloomers for me. 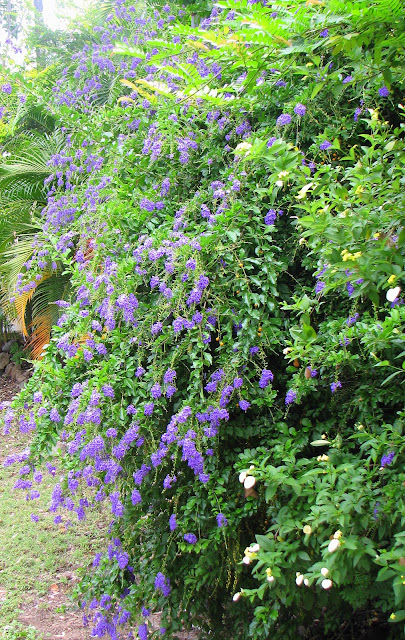 The Durantas started to flower again ... they take turns throughout the year, but the old reliable Big Mama always starts first and she was true to form again this year.  She is the tallest of all the Durantas and always has the darkest flowers.

Last of all ... what was blooming out in the Greenhouse or Shadehouse garden? 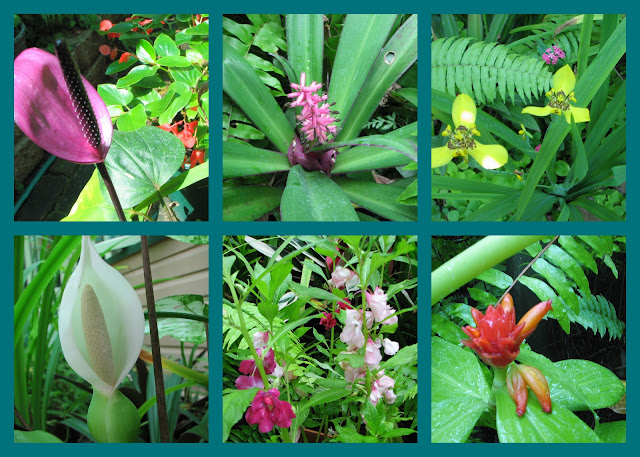 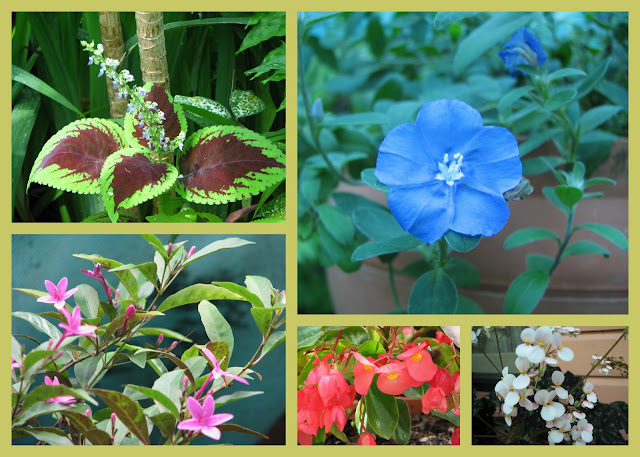 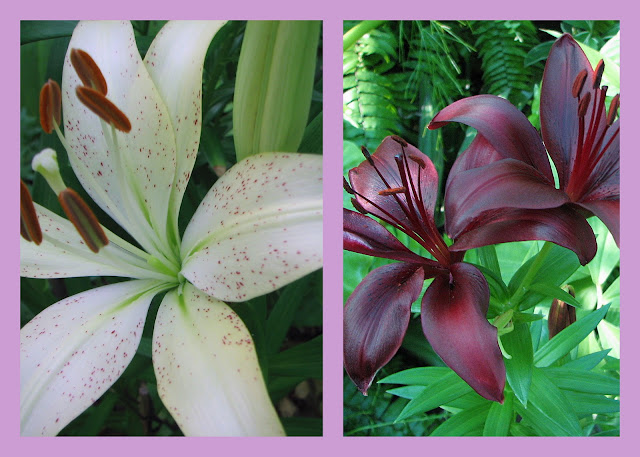 I had a pot of Asiatic lilies out in the Shadehouse Garden ... and these were a first for me as well this year.
That was the state of play in the garden during mid-Spring this year.