My Corner of Oz: The Dry Tropics

My garden is located in an area of north-eastern Australia that is best described as a 'dry tropics' region.

The area has a tropical climate - but because of its geographical location, it does not receive as much rainfall as elsewhere in the tropics.

Further north the coastline runs north/south and the trade winds are lifted to produce rainfall through the year. However, my region lies on a section of coastline that turns east/west, so the lifting effect is not present.

MY CLIMATE:
Our climate here can be characterized as having only two very distinct seasons: a short 'wet' with considerable rainfall, and a long 'dry' period for the remainder of the year.

THE  WET
The summer months (December to February) are hot and humid with tropical thunderstorms usually starting around mid-December. This is the time of our 'wet' when bursts of monsoon rains can occur from late December through to early March ... but due to the 'hit and miss' nature of tropical thunderstorms, there is considerable variation from year to year. We can record around 450mm in a dry year and around 1700mm in a very wet year.  It's also during this period that tropical cyclones can threaten our region.

Here's the surrounding bushland during the 'wet' season: 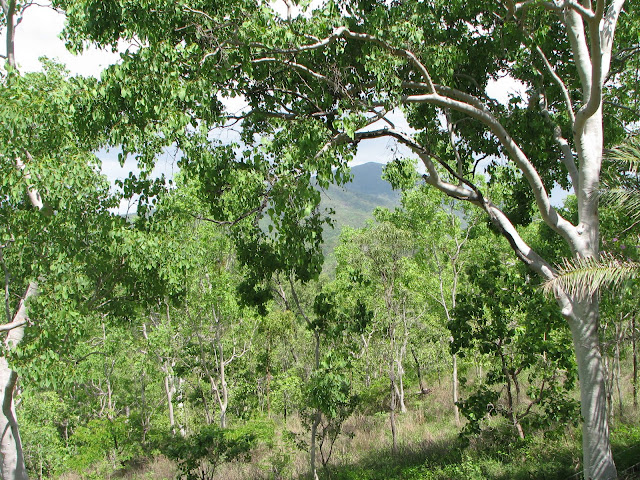 THE DRY
The 'dry' season lasts from Autumn right through to the end of Spring (March to November)... that's around nine months when we receive little or no rain at all!  These months are far more comfortable ... dominated by strong south-east trade winds and mostly fine weather, blue skies, warm days and cool nights.

Here's the surrounding bushland during out 'dry' season: 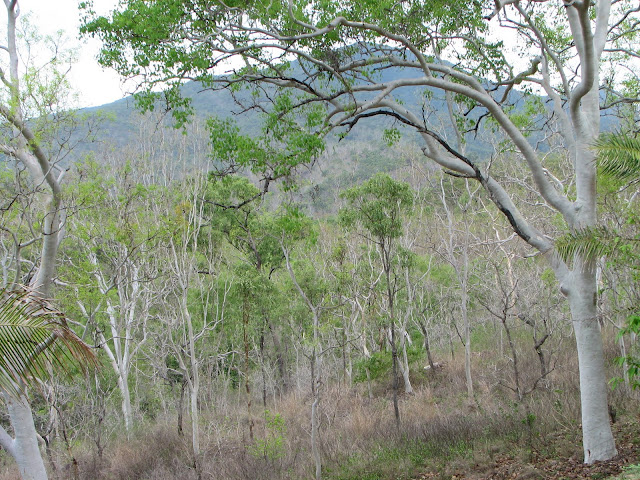 Video About My Location:
Here's a great little video clip that describes the gardening conditions in my spot of the world:
Gardening in Townsville

My place is situated on a property that is located on the side of a rocky hill surrounded by bushland.  The property is basically bedrock - garden beds had to be built up and soil brought in when planting was begun.


Most of the plants on the property have to be quite drought hardy because of the long dry spell every year and they must be sun and heat hardy as our summer temperatures can be very high. High humidity levels during summer is also another factor that influences the choice of plants.  Then, of course, if we do get torrential rain during the 'wet', the plants must also endure driving rain and days without sunshine.

My property was a difficult site for establishing garden areas.  As mentioned above, the whole property is on the side of a hill and is basically bedrock.  To create garden beds involved bringing in soil and establishing an irrigation system to enable the watering of these beds - water restrictions have been in place in my part of the world for many, many years now.  We have to be very conscious about restricting the amount of water use in such a dry area.


Consequently ... there are no fabulous flower beds or cottage style borders!

There are garden beds on either side of the long driveway into the property ... and these are filled with mainly Golden Cane Palms, russelia, duranta repens and crotons. 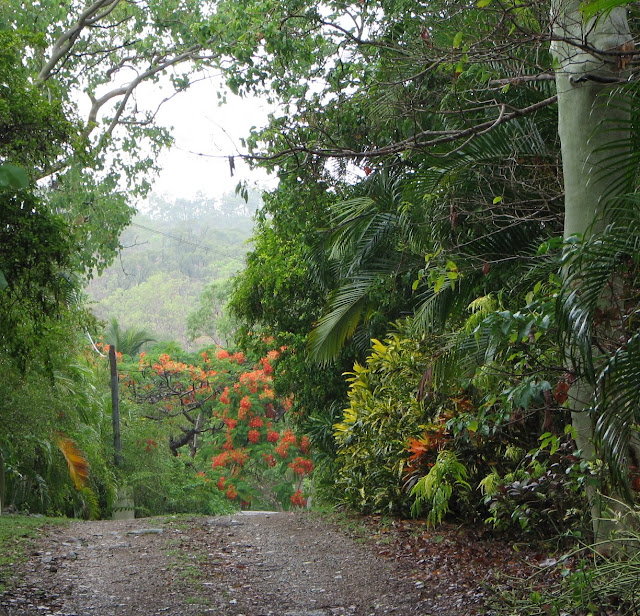 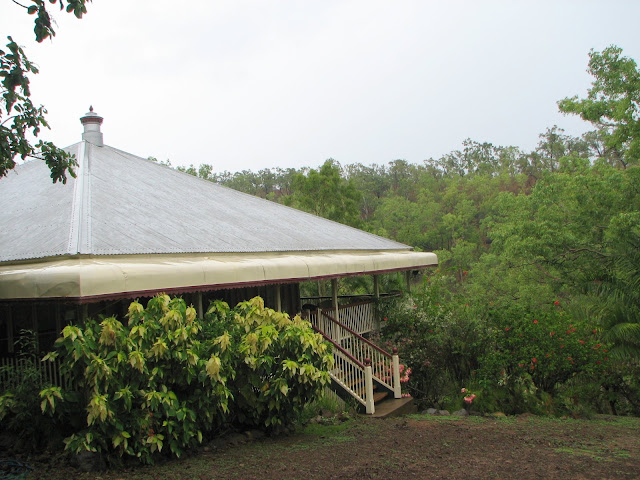 There is a downstairs garden bed on one side of the house filled with pentas. 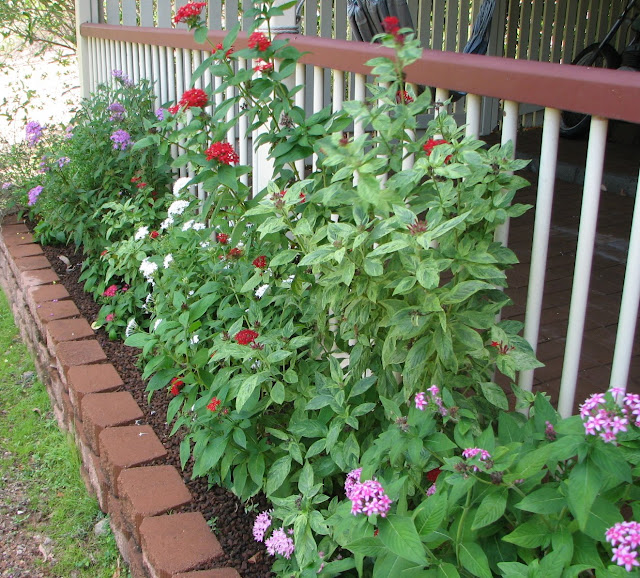 There is also a courtyard garden at the back of the house where I grow my potted plants.   This is one of my garden spaces where I can have fun changing the potted plants and the colours according to our 'wet' and 'dry' weather pattern.  This is my favourite garden space. 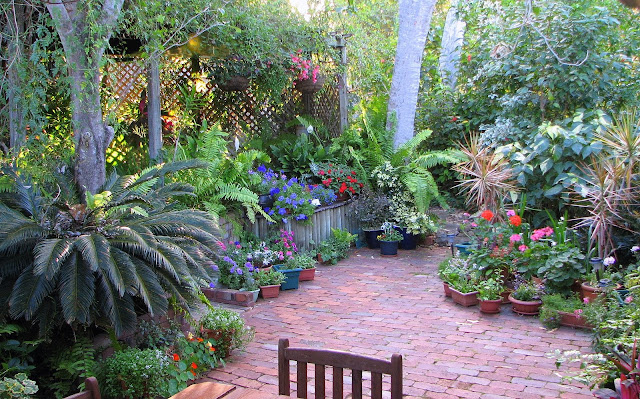 This space also has a small area of ferns, palms and a cycad under a jasmine-covered pergola to one side of the courtyard. 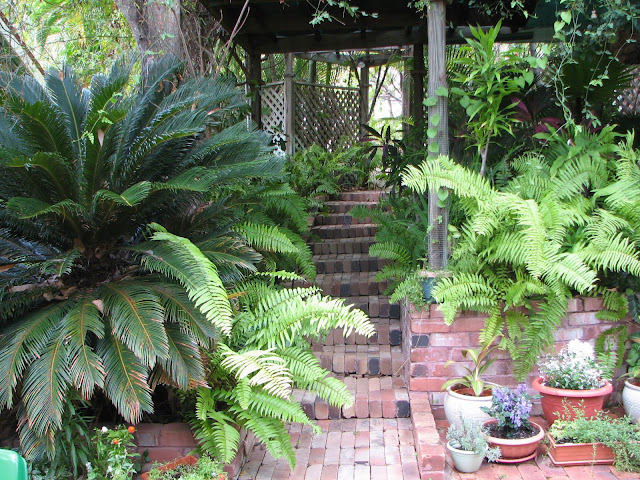 Behind the courtyard garden is a large screening bed containing plants like acalyphas, crotons, ixora, cycad, aralia, ardisia and mussaenda. 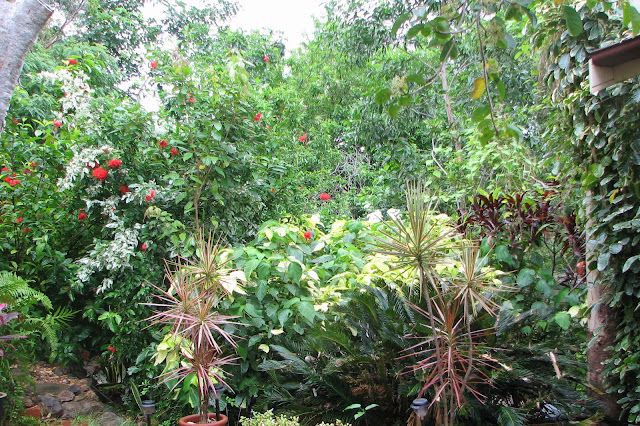 Then there is a greenhouse/nursery area filled with plants that need some shelter from the hot midday/afternoon sun - ferns, impatiens, coleus, begonias, irises.  This is also another garden space where I can make changes ... I'm planning to add pots of coleus and other tropicals like gingers in here to add more interest. 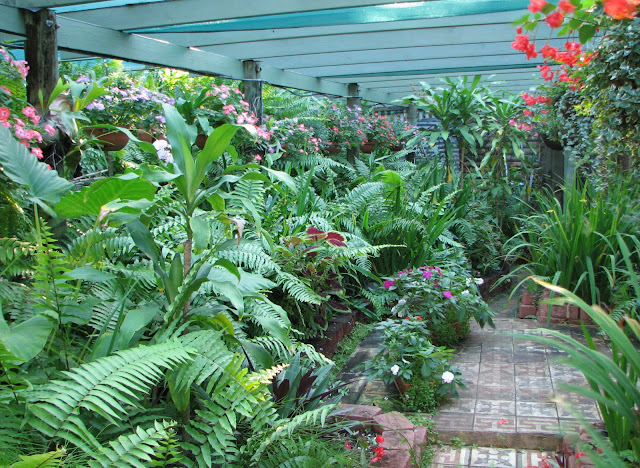 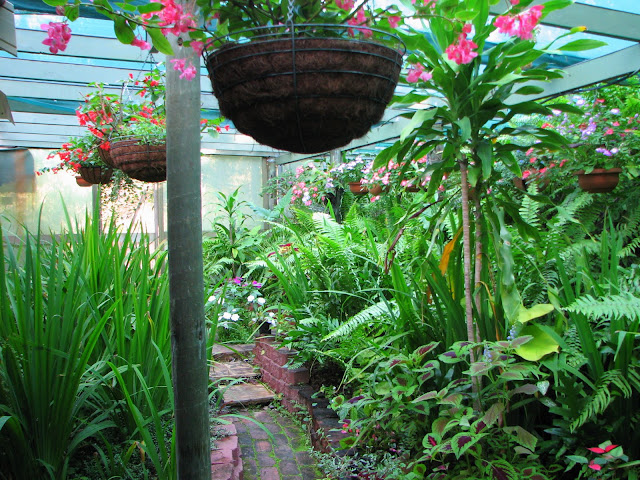