Working Towards A 'Healthy Habitat' ... Chapter 3.

Well chapter 3 has been a long time coming.  It's amazing how our everyday life (away from the garden) can take over completely.  We've had a few surprising curve balls thrown at us since we began the Healthy Habitat project back in August of last year. 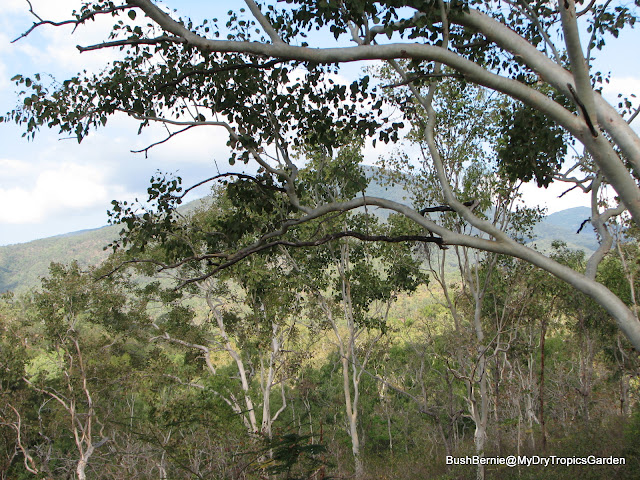 Back then, eight months seemed a long enough period of time to get the project well under-way.  Eight months of weekends!  That sounded like plenty of time to get things done, but you know the old saying about the best laid plans!  A combination of unexpected events meant our good intentions went unrealised for a number of months.

First, there was series of family crises, which culminated in a couple of absences from home totalling around a month and a half.  While I was away, my husband had to take on a major home renovation/painting job, which took two months of all his spare time to complete.  We both had experienced a significantly heavier work load at both our jobs, which meant quite a few late afternoons and early evenings spent at our workplaces instead of at home on the project.  My husband's growing commitment to a couple of community and church groups meant that he had almost no spare time at all, spending many weekends elsewhere from home.  I was also (ambushed!) talked into lending a helping hand with a couple of his huge fund-raising events.

This all resulted in very little time spent on the Healthy Habitat project between August 2012 and April 2013.  Whilst this is not the end of the world, we had hoped to be much further along with the project by now.  So, what have we done since my last Healthy Habitat post back in October?

We had received our "Land Management Plan" which provided in-depth details of the regional eco-system, identification of all the environmental and declared weeds on the property, along with a listing of all the native species growing here.  It was time to write up an application for funding and an action plan.  Lovely Jaymie made another visit to help us out with this, and we worked out priorities for our project and costings.

Our plan was fairly straightforward.  The number one priority was weed control, primarily the control of Lantana camara and Zizipus mauritiana or Chinee apple, which are two of the most invasive declared weeds on our property. Now while the plan was not at all complicated, it was not going to be a walk in the park. 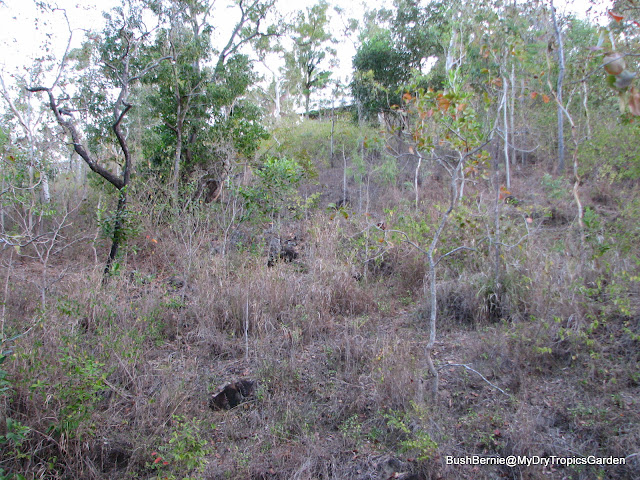 Because of the steepness and inaccessibility of nearly half of the property, especially the area we refer to as the 'bush paddock' where the majority of the weeds were quite widespread,  removal of the two declared weeds, Lantana and Chinee Apple, was not going to be an easy or simple job.

The shot above shows a section of the bush paddock looking back up to the house in the distance ... you can just see the roof of the house right up at the top of the photo ... and this gives some idea of the steep rocky slope our bush paddock sits on.

We couldn't hire a large piece of machinery to knock down the massive clumps of Lantana and stands of Chinee Apple.  It would have been far too dangerous.  The other risk with digging out these horrid weeds, was the potential for erosion on the steep slopes.

So, poisoning them and then leaving the dead plant in-situ, was considered to be the best way to control erosion.  The decaying and dying trunks and roots of these woody weeds would provide some holding capacity.

We applied for funding to purchase herbicide, and a selection of native plants to plant.  The approval letter arrived in early November, but we had already started work. To begin the weed management exercise, my precious husband spent hours and hours and hours, over a couple of weekends and after work, creating fire breaks around the bush paddock where the majority of the declared weeds thrive.

It was arduous, back breaking work which proved to be quite a feat not only for the man, but for the weed trimmer as well.  There were huge clumps of Lantana growing pretty much all the way round the fence line, as well as lots of young Chinee Apple saplings and more mature trees.  It was a job that nearly killed my poor darling hubbie.  The trimmer had to go into the workshop for many, many little fix-up, repair sessions.  Hubbie had to take a few breaks too, as he suffers from osteo-arthritis in his spine.  As I said, it was back-breaking work for him. 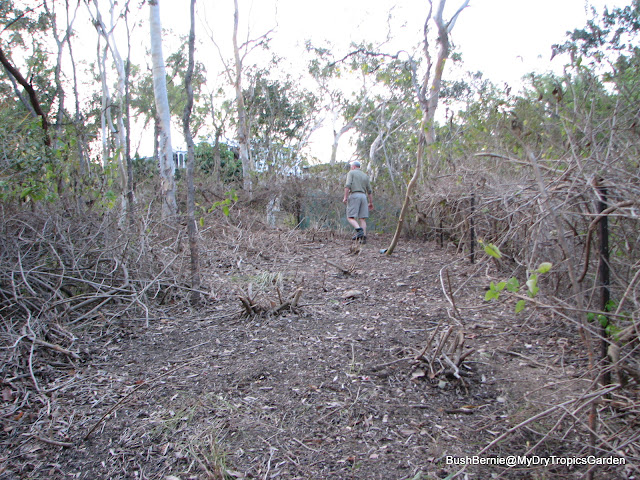 Anyway, after many long afternoons and weekends of work, hubbie had established quite a large area of fire breaks all around the fence line, on all four sides of the bush paddock.  When the task was finally completed, I accompanied him as he took a stroll around to get a look at his great work.

In the photo above, that whole section laid bare was completely covered by Lantana that stood around a metre and a half in height and stretched for around five metres in from the fence line. 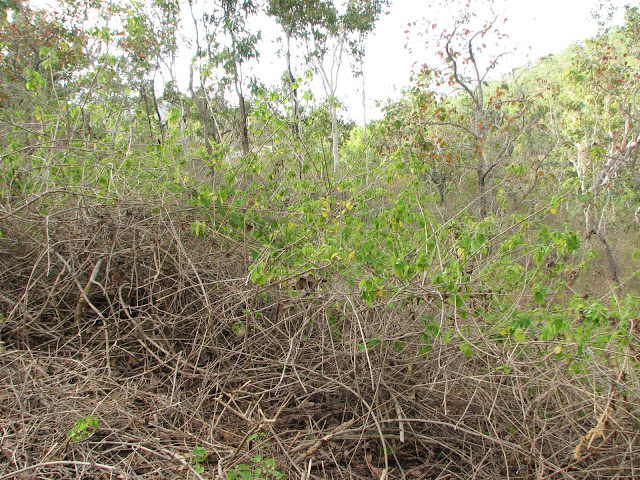 This is a close-up showing the almost impenetrable web of branches that formed one of the massive clumps. 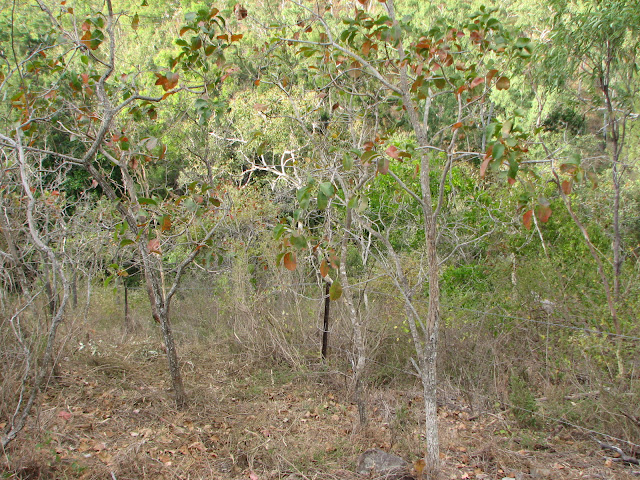 Walking around the fence line afterwards meant we could get a better look at some of the existing local native species, like the Planchonia careya or Cocky Apple trees in the photo above.  Whilst they're not the most spectacular looking trees, they do have fabulous looking flowers.

After the back-breaking job of creating fire breaks, it was time to get a fire permit to burn off the bush paddock.  Usually the best time for a controlled burn off in this area is early 'dry' season, when there is still good soil moisture after the short wet season.

We had however had fairly decent Spring rain, which occurred towards the end of our long 'dry', so we decided to go ahead with a late 'dry' season fire.  The intention of a controlled burn was to clear out some of the smaller, lower priority weeds and allow better access to the Lantana and Chinee Apple trees on the slopes. 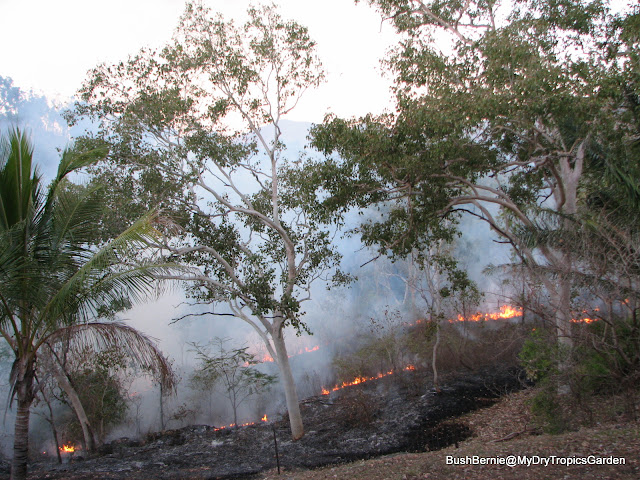 Of course, with steep hill burn-offs, it's best to burn from the top down.  The aim was for a cool burn of short duration and low flame height.  That was achieved.  The burn-off took a few hours in the cool of the afternoon and evening, when the wind speed had dropped to less than 24 km per hour, and the flames remained fairly close to the ground throughout the exercise.

Now I've never been in amongst a burn-off before, and found the whole experience to be just a little overwhelming to the senses.  There were times when I just could not breathe because of the smoke.  We had to walk around the outer edges just to make sure the fire didn't jump the fire break sections.  It didn't, and the whole thing went off without a hitch. 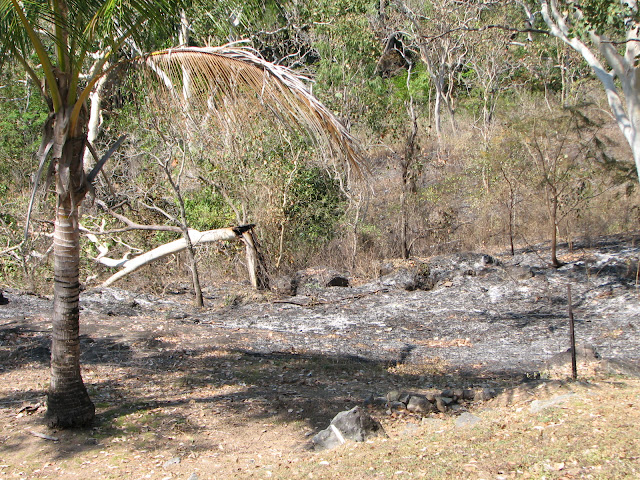 After the burn-off, the bush paddock was a bit of an eyesore, all blackened and scorched.  We did lose a couple of tall trees, like the Eucalyptus in the photo above, 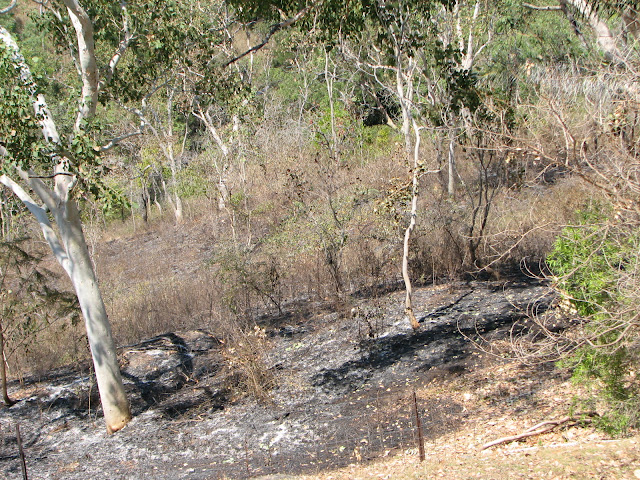 but most of the Eucalyptus and other native trees remained unscathed by the flames.  They have evolved to withstand bushfires.  It was remarkable to see the contrast between the stark white trunks of the Gums, and the black scorched earth all around them.

Okay, so that was the state of play at around the end of September / early October.  Then ... everything went haywire and the next stage of the project went on hold for quite some time.  It was so strange that as soon as our application approval letter arrived, all work on the project ceased!

As part of the project, we were to keep a detailed project diary listing all the activities undertaken, including the in-kind contributions that matched the amount funded by N.Q.  Dry Tropics.  The funding is only supposed to represent 50% of the value of the project.  We had to contribute the other 50%.  This contribution could include our own labour and purchases.

Well the project diary sat on the office desk for months, with no further entries made all through the Summer and into early Autumn.  Then we finally got a break from the demands of life, and resumed some of the work in April. 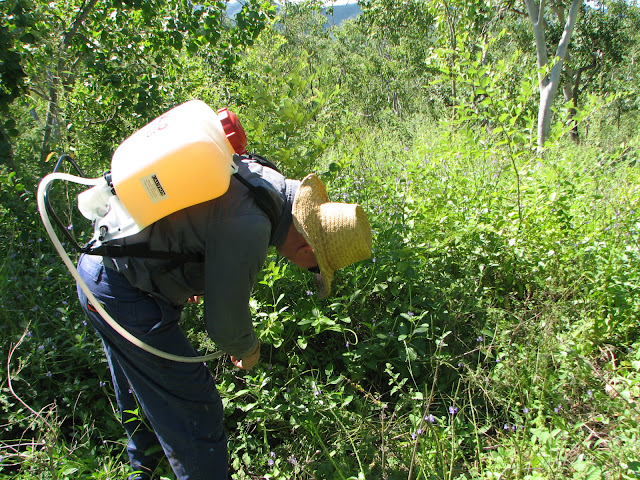 It was time for the careful and judicious use of recommended chemicals.  Yes, this was part of the negotiated plan of action.  The basal bark method was considered the most effective for dealing with the Chinee Apple trees and the Lantana.  So out we went, backpacks of poison on our backs, and we proceeded to spray.  It took ages!!  We tried to be very, very careful with the application.

While we were down in the bush paddock dealing out death and mayhem, we saw some wonderful insect life. 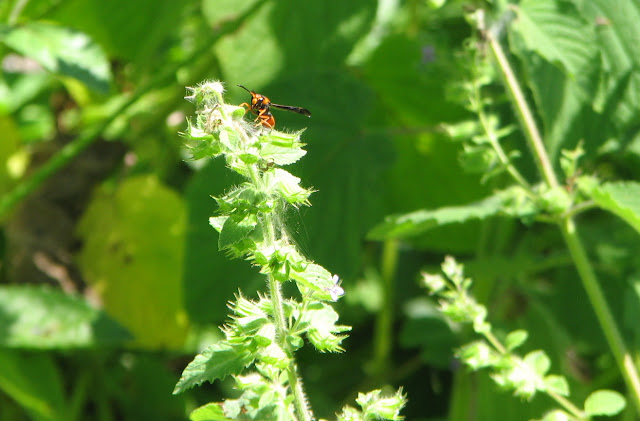 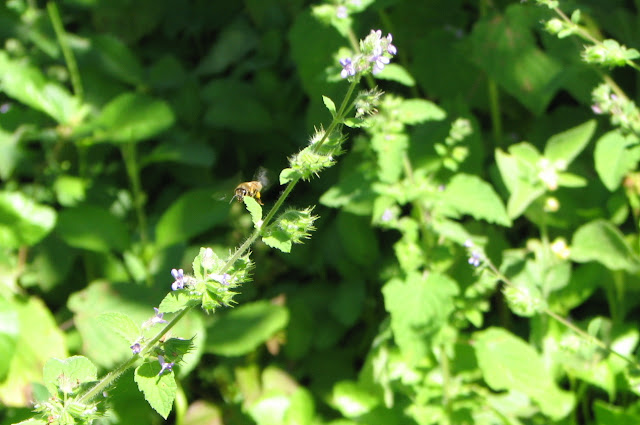 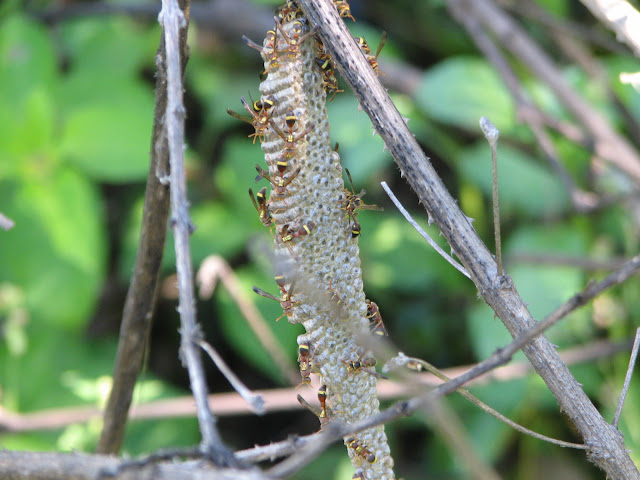 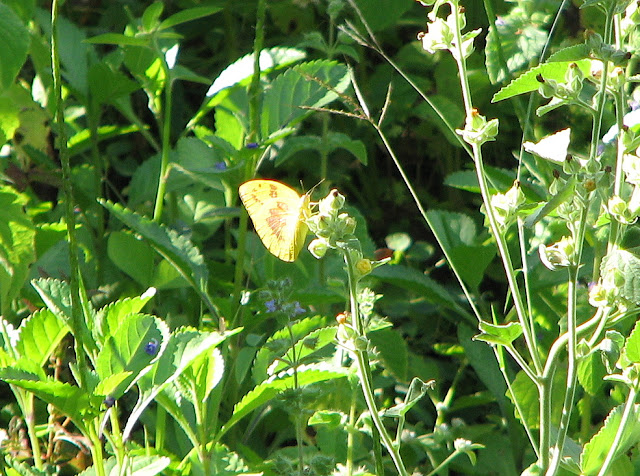 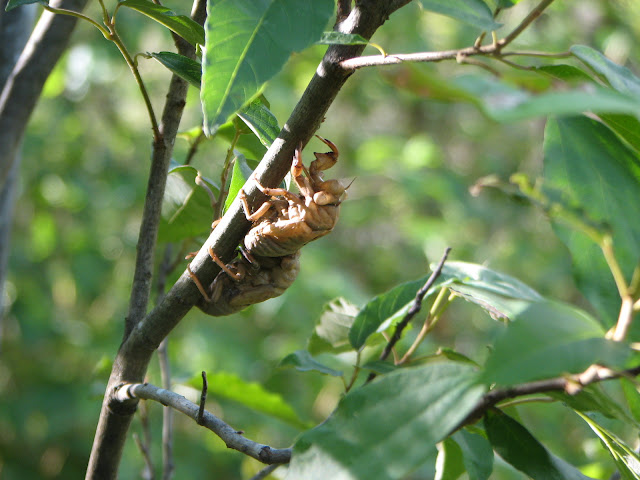 It was also fantastic to get a closer look at some of the native species out in the bush paddock. 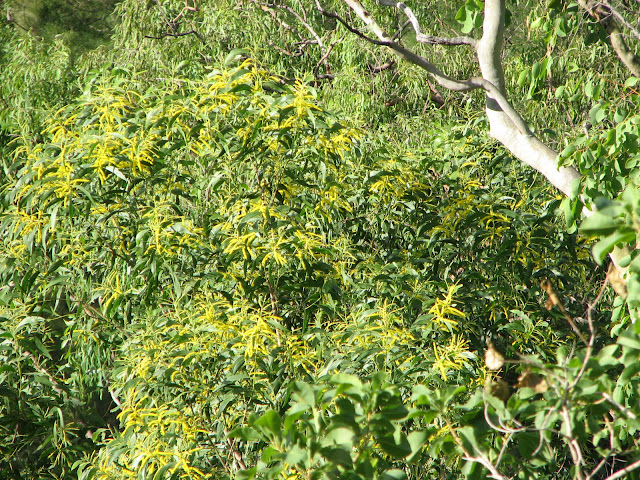 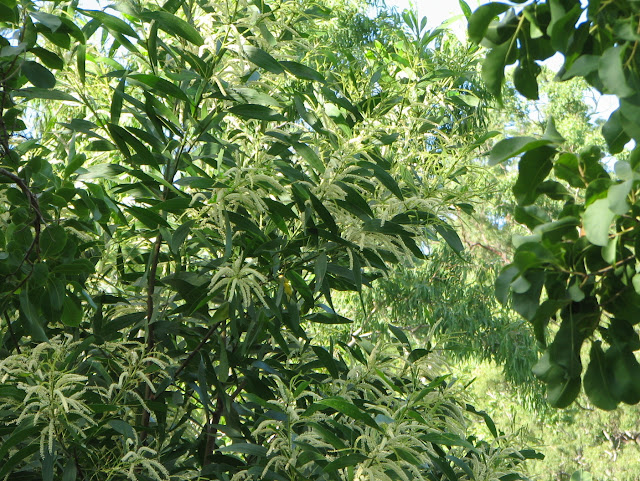 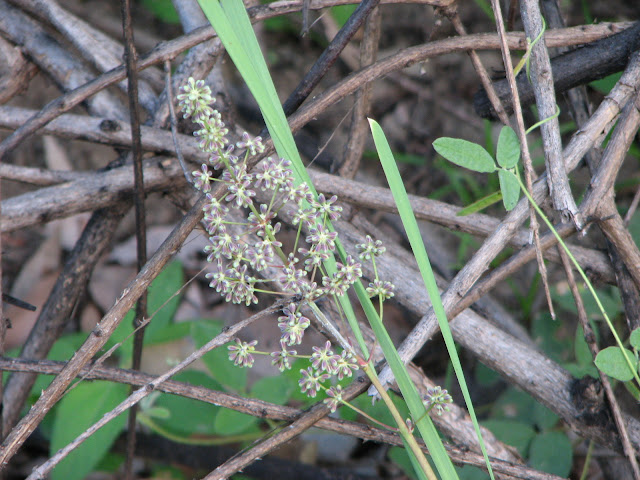 The native Lomandra longifolia was flowering. 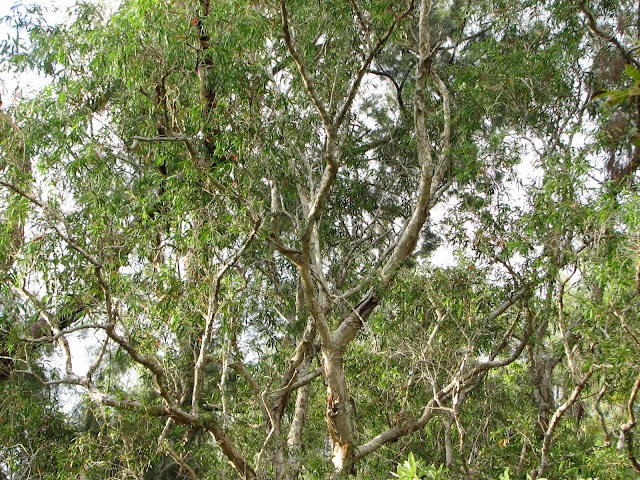 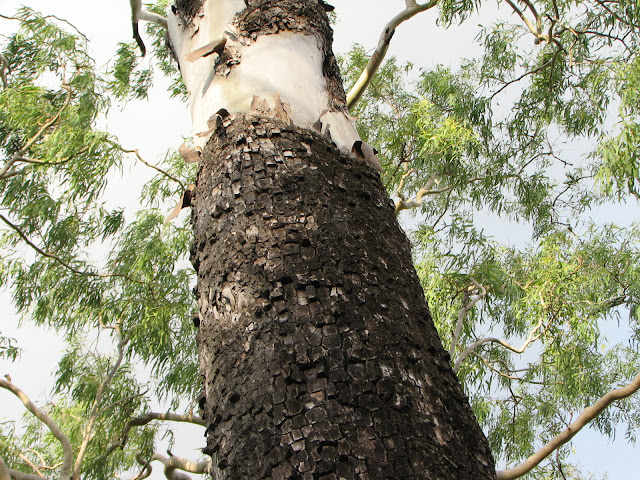 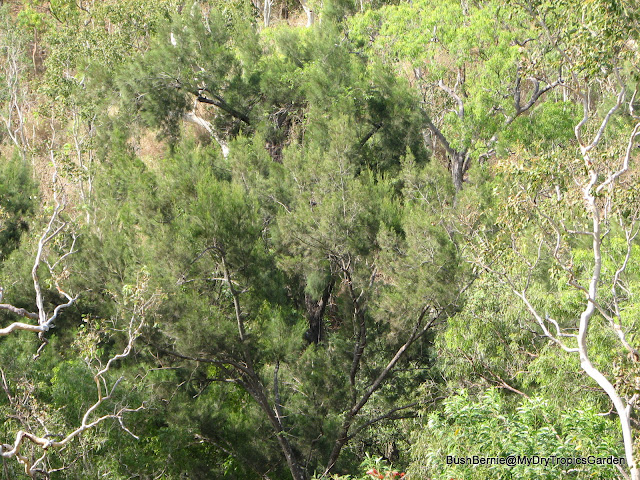 The branches of the Casuarina cunninghamianas or River She Oaks were swaying in the breeze, and creating that wonderful whistling sound that happens when the wind blows through the She Oak foliage. 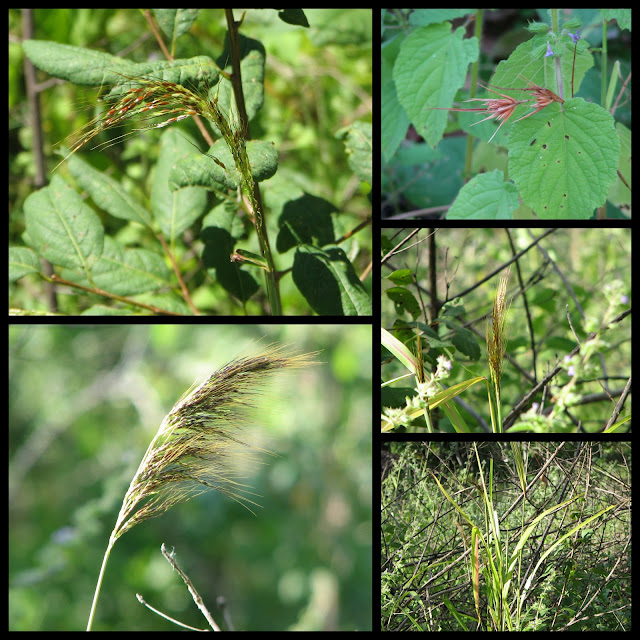 There were a lot of different grasses growing in various locations.  I'm certain some, if not most, are native grasses but I'm afraid I'm not all that knowledgeable when it comes to identifying which grass is which. 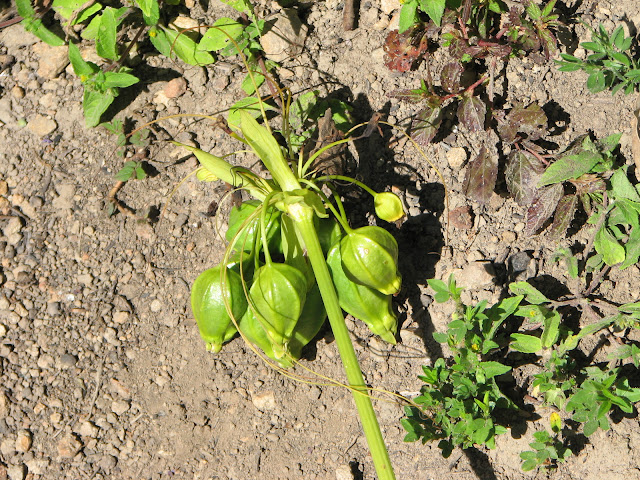 I also spotted this unusual plant.  I'm not sure if it's a weed or a keeper!

We've had two runs at using chemicals now, and it certainly has had an impact on the almost indestructible Lantana and Chinee Apple plants. 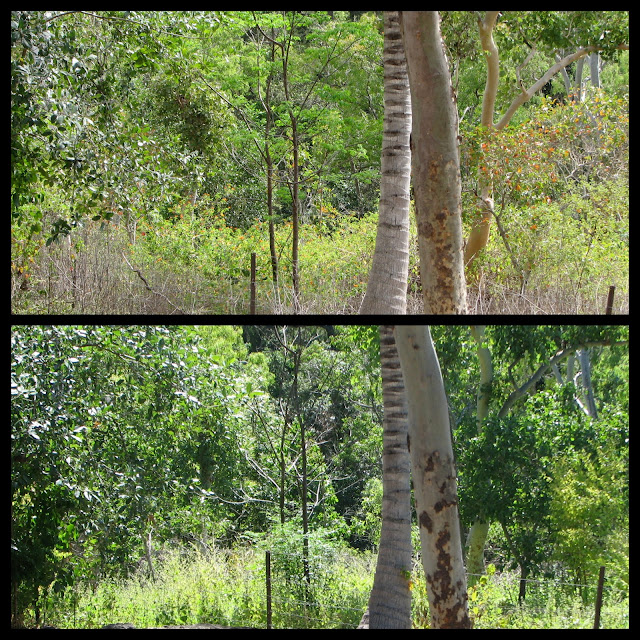 Looking at the top photo in the collage above, you can spot the massive clumps of Lantana, over the fence, stretching from one side of the photo to the other.  You can probably see the masses of orange and yellow flowers.  Looking at the photo on the bottom, all you can spot is a few dead brown sticks. 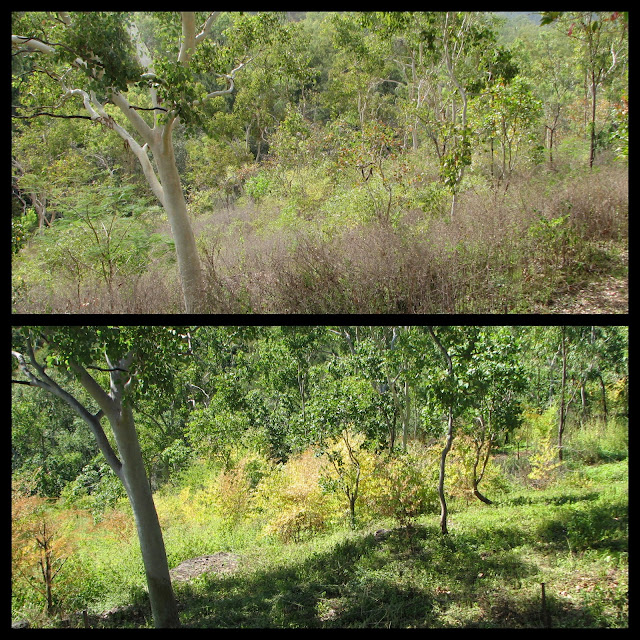 Comparing the two scenes in this collage, you will notice the decidedly different look of the second shot where the Chinee Apple trees, and Poinciana trees (which we also treated) are yellowing and dying off.  We're also slashing the top part of the slope regularly now to keep those weeds under control.

So, we're finally back on track now.  The next step is to tackle some of the other environmental weeds on the property.  That will be the next chapter.