My Place - Part 4: The Greenhouse/Shadehouse Garden

This is the fourth post about the various parts of my dry tropics garden here in north -eastern Oz.  For the previous parts, please click on the 'All About My Place' tab above this post.  Alright now for the next instalment ....

The western side of my house is set into a section of rocky hillside ... which could have meant an ugly view from the windows on that side.  This is not the case, however.  The entire length of this western side has a greenhouse or shadehouse area attached.

The way we use greenhouses here in north Queensland is a little bit different to the way there are generally used. They're not used as a 'hothouse', as is the case in the northern hemisphere, but used more as a 'coolhouse'.  They are covered in shadecloth that blocks out most of the sun's UV rays, giving much needed protection from that really hot and intense summer sun, and providing relief from the heat thus making the area inside a little cooler than the outdoors.

My Greenhouse/Shadehouse Garden area attached to the western facing wall of my house, makes a noticeable difference to the indoor temperatures on that side of the house.  It provides a cool spot to grow many plants which would not survive out in the garden, especially during our horrible summers. It also provides a break from the winds we get around here. It's a lovely place to potter around in during the Summer when the sun's gone down - quite cool!

I've included a short video clip that gives some idea of what this area is like ... this was shot at the end of September which was our first Spring month.  (Just a quick note:  please scroll down and turn off the Playlist music ... on the sidebar ... as this will interfere with my commentary on the video clip).

While vista shots are commonplace amongst so many garden blogs, they are most definitely NOT common on my blog.  The position of this property ... it sits on the side of a rocky granite hill 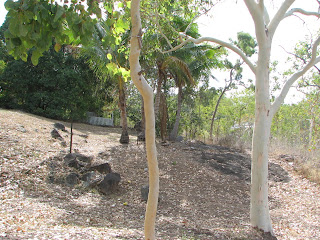 ... and the conditions here ... including non-existent soil of any worth or depth and the long hot, dry weather for most of the year  ... make it almost impossible to have long meandering garden beds filled with great colour, texture and seasonal interest. For those readers who want those sort of long views ... you have definitely chosen the wrong blog.

Garden beds on this property are few and far between ... and were created long before hubbie and I moved in here.  Those garden beds are now completely compacted following years of heat and drought with occasional monsoonal wet seasons ... the soil that was bought onto the property to create those garden beds has been properly cooked, pummelled and beaten into submission and now pretty much resembles concrete!!!!  I actually yearn to get out and dig into soil with a shovel!

Since my interest in gardening was only re-vitalized around two years ago now, my efforts have centred on adding lots of potted plants to the garden areas close to the house ... my Courtyard Garden and my Greenhouse/Shadehouse Garden which I have written about in a previous post - An Inside-Out Garden View

I have not paid all that much attention to the other long-ago established, rather boring and uninteresting garden beds around the property.  Over the years since we moved here, quite a few plants have disappeared from these garden beds ... mainly the result of low rainfall and the watering restrictions that are in place in my part of the world.  Whatever was growing in those garden beds just had to survive without my help ... or perish and disappear forever.

Two of those poor unloved garden beds are the Driveway Garden Beds that flank the rather long entrance to our property.  These beds have been watered very sparingly over the years ... the irrigation system that sits in those beds is only turned on every two months or so during the 'dry' season (which lasts for anything up to nine months of the year) and the continued existence of the plants in these beds rests almost entirely on the rainfall we receive during our 'wet' season (which usually only lasts for a few weeks at the end of Summer).

There are no gorgeous perennial flowers or any underplantings whatsoever. The planting does not change ... unless something dies!!  The only noticeable change would be when some of the shrubs or trees are in bloom .... otherwise it looks the same most of the year .... GREEN.  I need to make a note here ... I've tried to find photos of the various shrubs and trees at different times of the year when they are in bloom, otherwise it would be a pretty boring picture of this part of my garden.

Beginning outside the property from the street ... 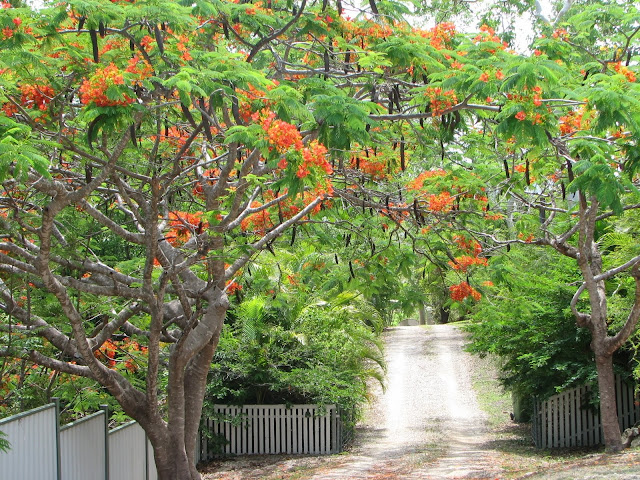 you would see that the front gate is flanked by two Delonix regias (Poincianas).  This is what they look like when they're flowering during our Summer:

Right behind those two sections of front fence are my two Calliandras (Powder Puffs), two Pseudomussaedas, an enormous Duranta, a stand of Golden Cane Palm and a Triangular Palm.

Here's a closer look at the Calliandras ... Calliandra haematocephala (Red Powder Puff) on the left side of the driveway ... 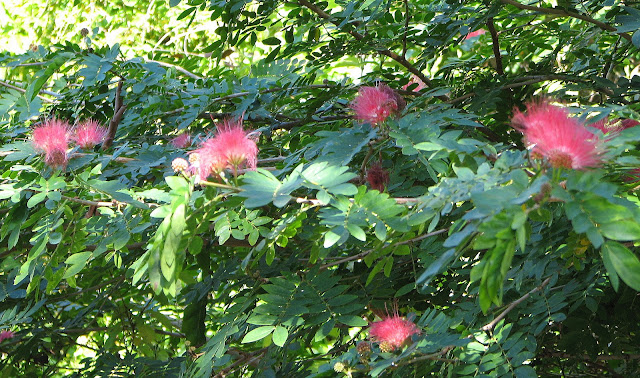 ... and to the right is Calliandra surinamensis (Pink Powder Puff):

These two Calliandras begin flowering in late Autumn and will continue to bloom right through to the end of Winter or the beginning of Spring.

This is the enormous Duranta repens just inside the front fence which now stands at over 5 metres and is in bloom for most of the year and, for some reason, has darker leaves and flowers than all the other Durantas. 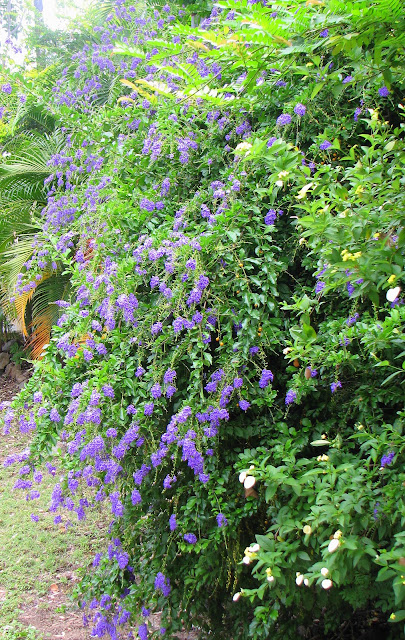 This is my showiest Duranta repens.

On the both sides there are two Pseudomussaendas  ... 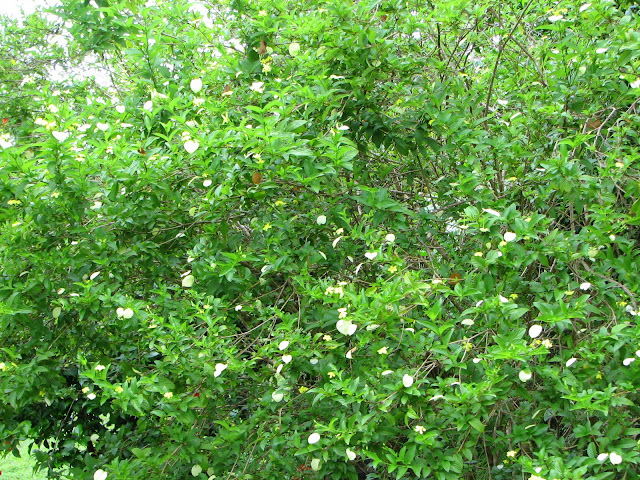 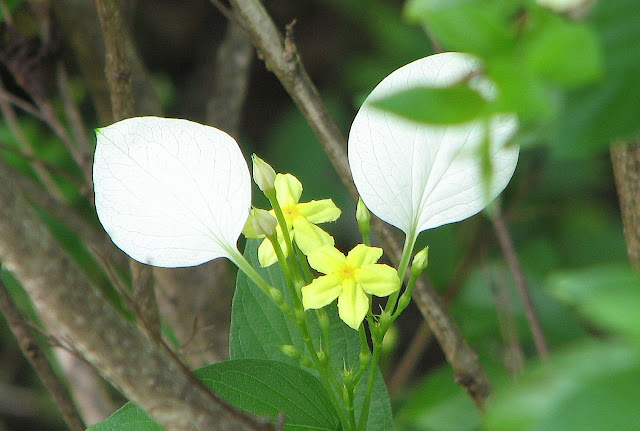 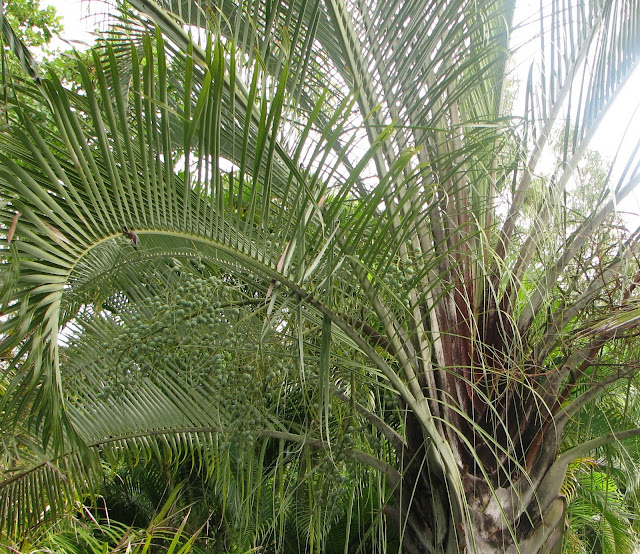 .. and on the left side just inside the front fence, there's a Dypsis decaryi (Triangular Palm).

Going further down either side of the long driveway into the property are the two long garden beds.  The one on the right side is edged with rocks.You can see from the photo below just how dry and desolate it is out there ... watering restrictions and our dry weather make it impossible to keep this part of the property looking lush and green all year! 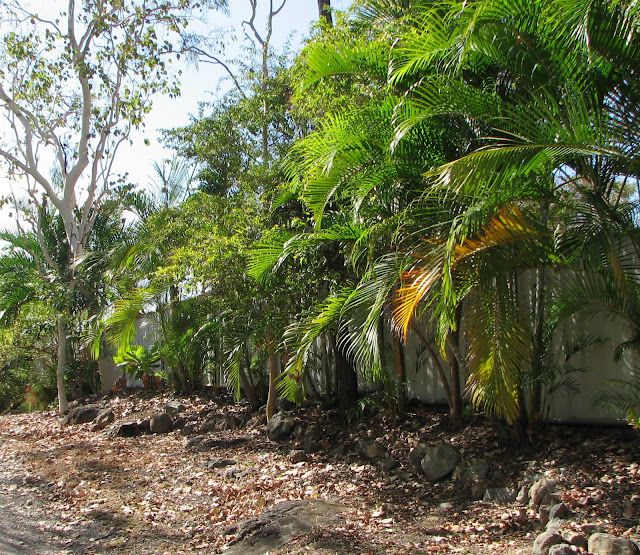 These garden beds run the entire length of the dirt driveway, so let's take a wander and see what grows in the beds.   They contain: 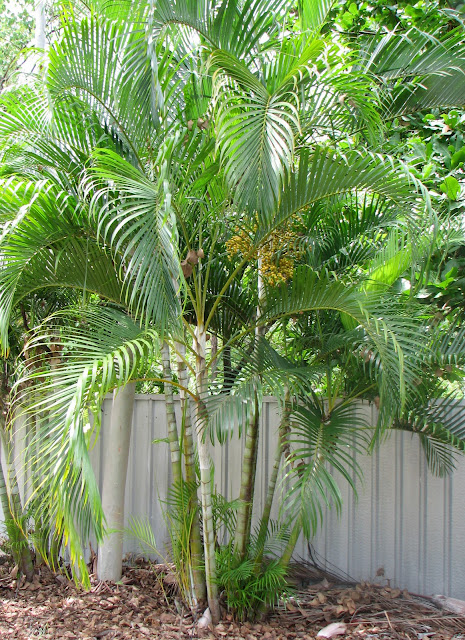 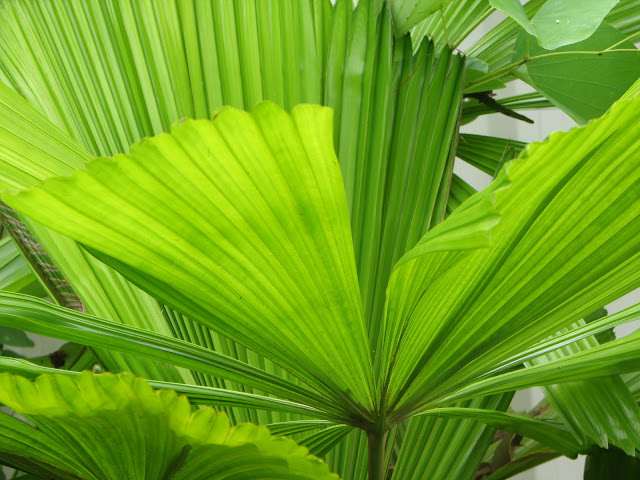 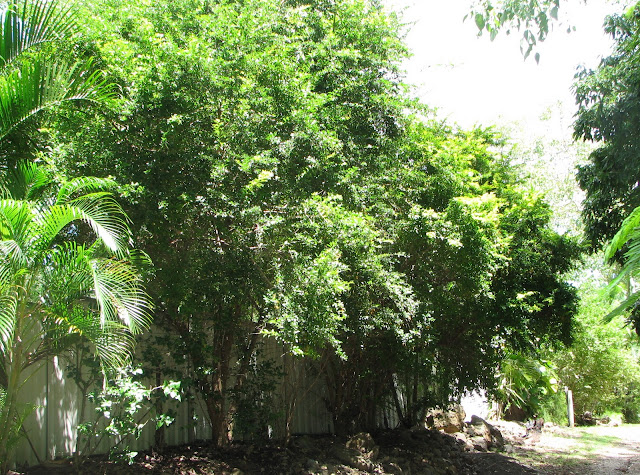 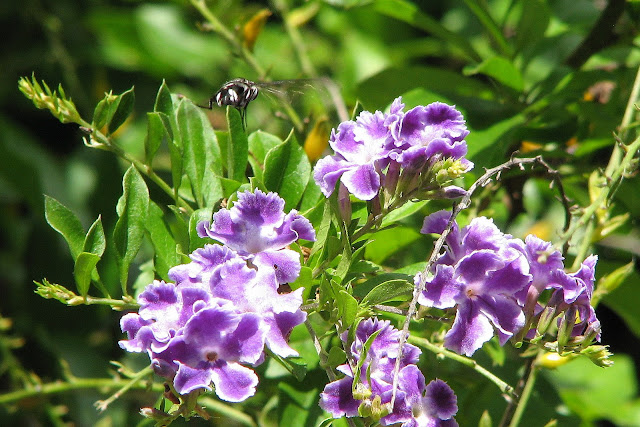 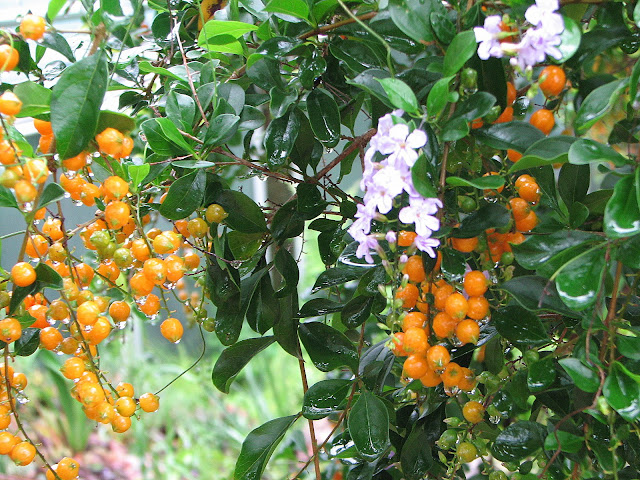 ... around six tall stands of Duranta repens shrubs, including two variegated ones, which all have beautiful purple flowers and orange berries at different times throughout the year, 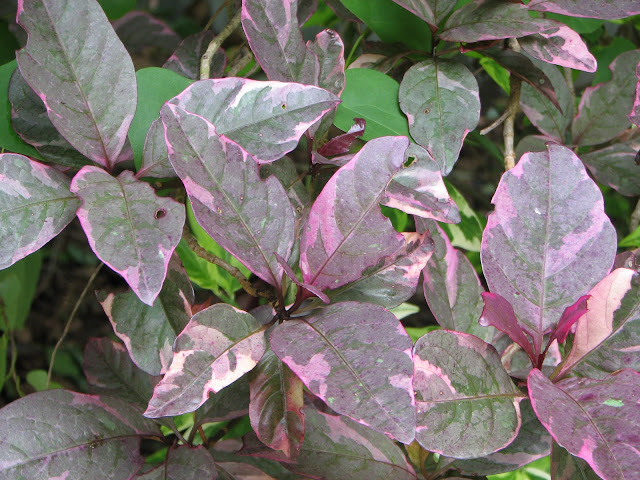 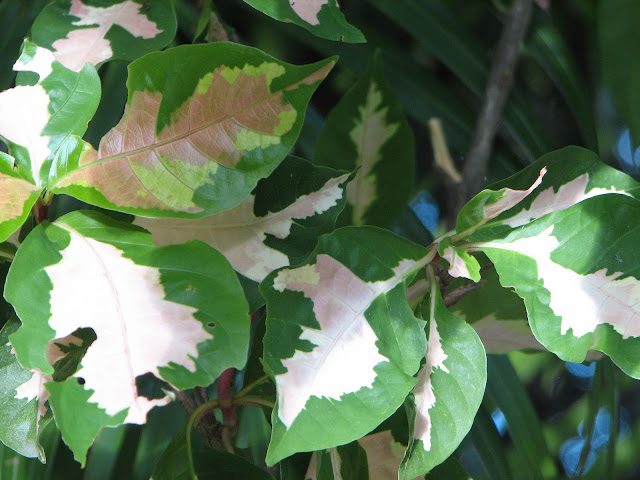 ... a few clumps of Russelia 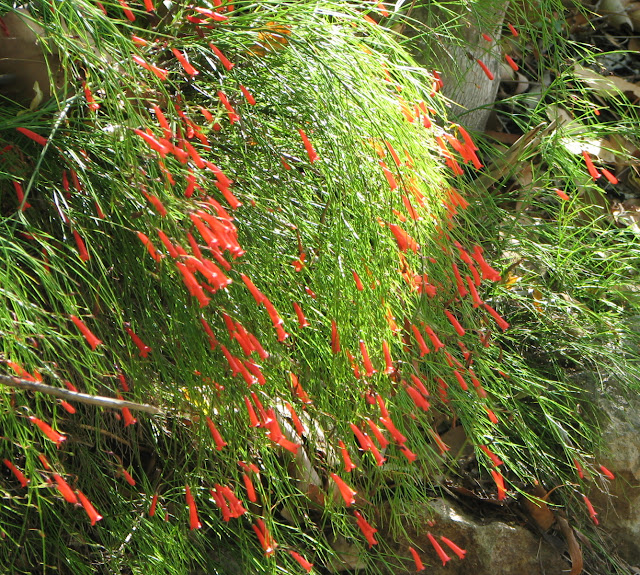 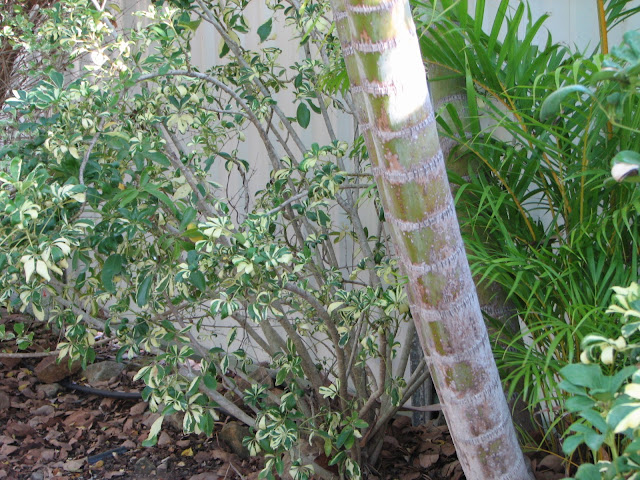 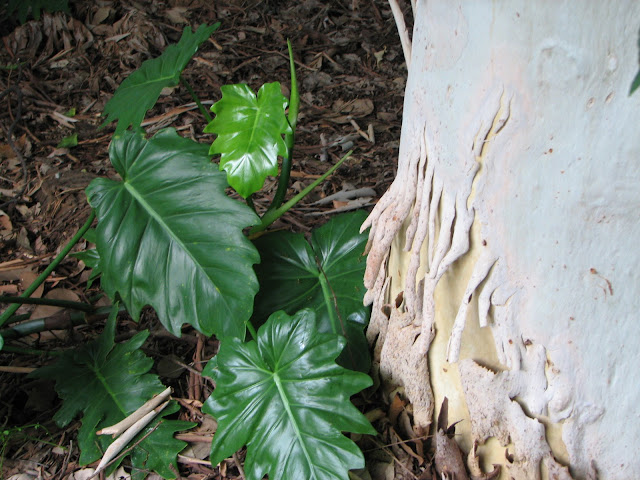 ... a couple of clumps of Philodendron,. 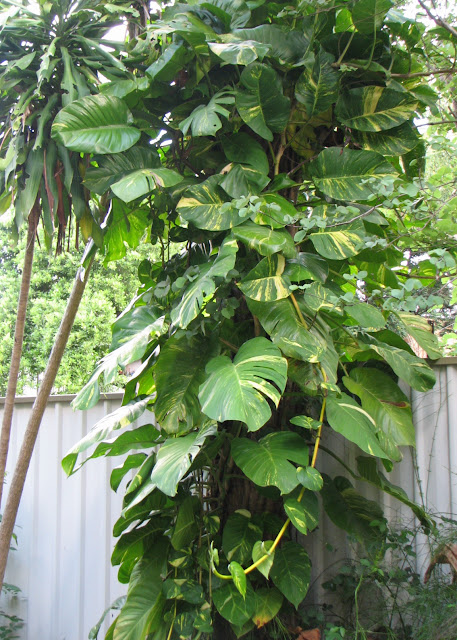 .. a sprawling climbing clump of Epipremnum aureum syn. Scindapsus aureus (Pothos) which is growing on an old gum tree trunk, 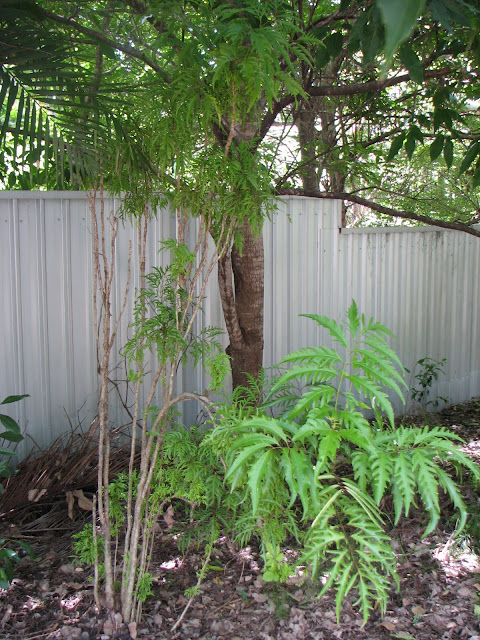 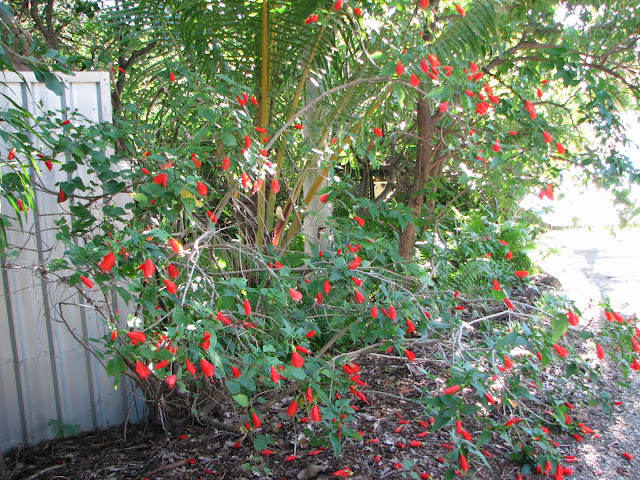 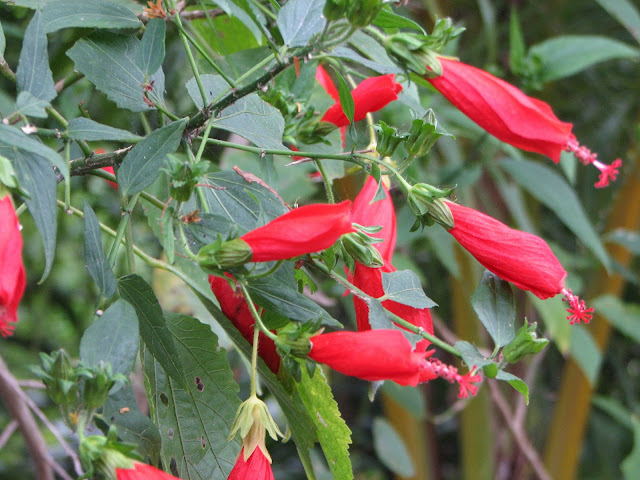 .. a large white Bauhinia variegata and a Tabebuia impetiginosa - which you can see in bloom here in this photo taken back during our Winter. 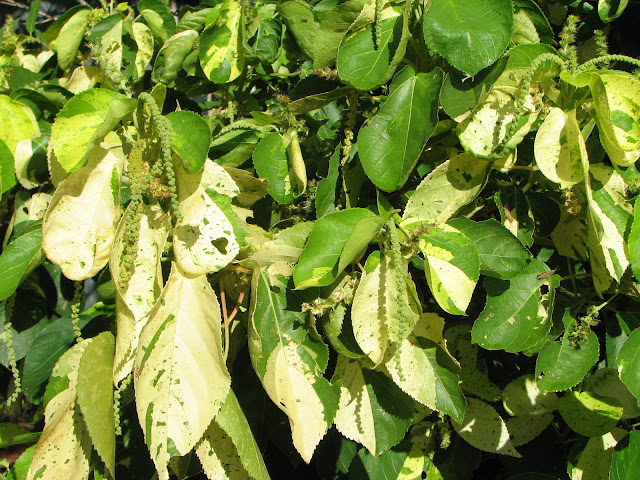 Right beside that garage at the end of the driveway there are several Acalyphas ... 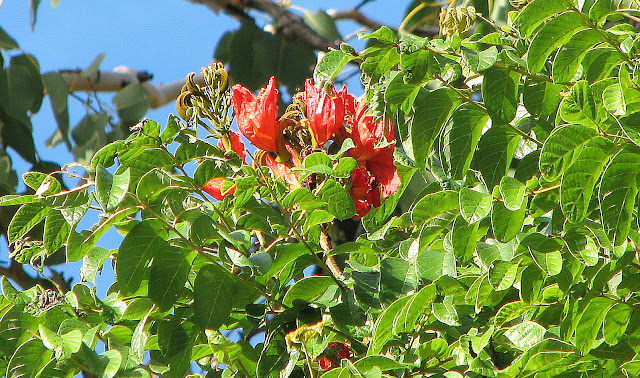 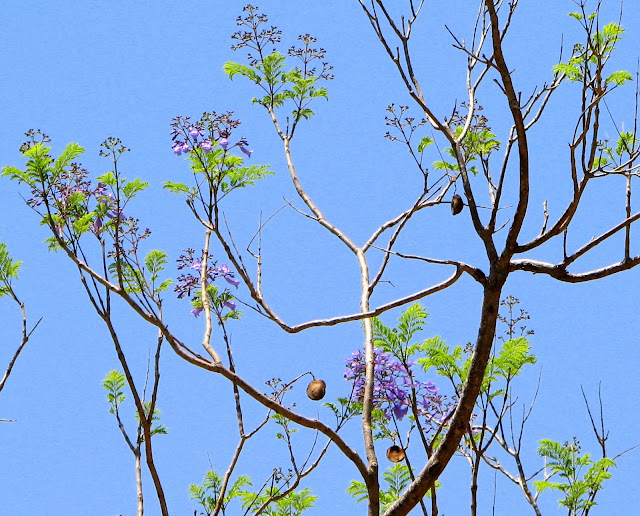 and finally, at the end of the driveway, standing behind the garage, is a Jacaranda mimosifolia which has just started to bloom .... 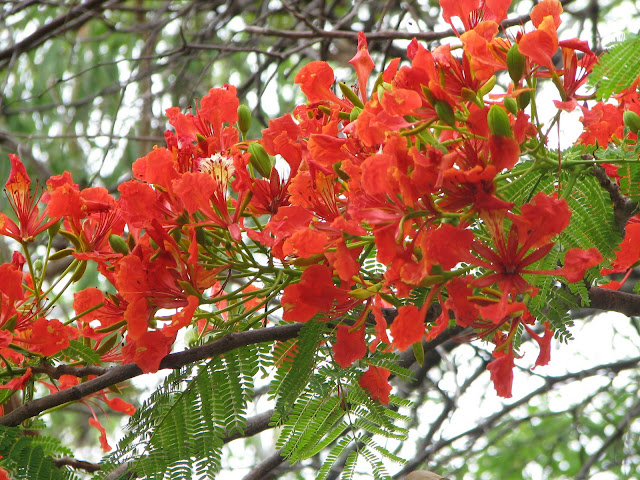 and a couple more Delonix regias (Poincianas) which won't bloom until Summer.
To end off, I'll add a few 'vista shots' taken at the beginning of the year after the 'wet' season ... hence the green grass you can see!  That is a rare sight during the rest of the year.  Oh, to be able to get out there and dig and plant ... if only I had a magic wand! 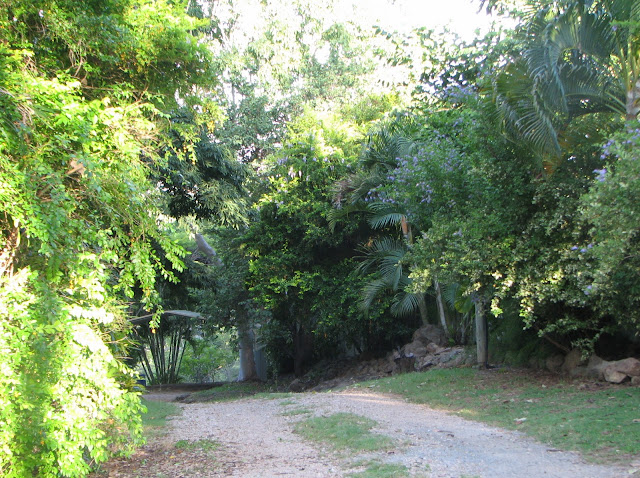 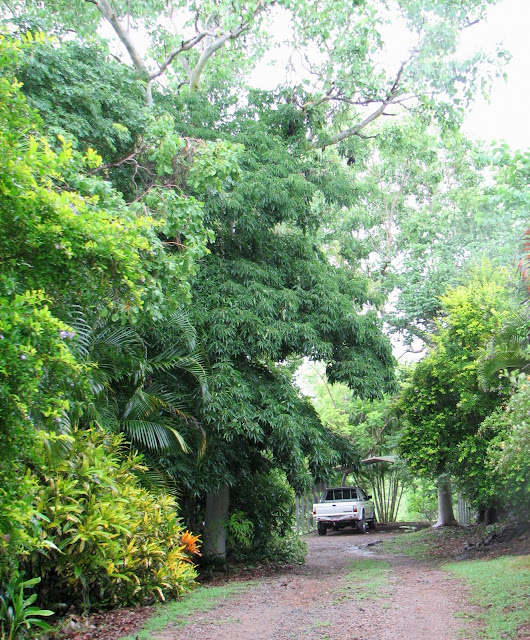 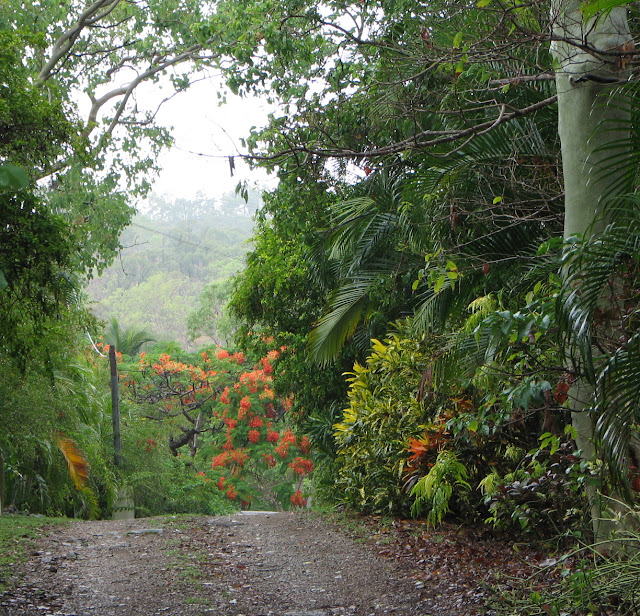 For Part 4 of My Place, please click on this link My Greenhouse / Shadehouse Garden
Posted by BernieH at 1:34 AM 15 comments: