Season: mid-Autumn and beginning of the 'dry' season


There's been very little rainfall for three weeks or so now which seems to be a sure sign that our 'dry' season has begun.  Typically, we will not receive much, if any, rainfall now until around mid-December ... hence the name 'dry tropics'.  Of course, 2010 was a bit of an exception to the rule around here ... it was one of the wettest 'dry' seasons we've had!  So it will be interesting to see how this year unfolds.  At the moment, though, we're experiencing those familiar clear sunny days. 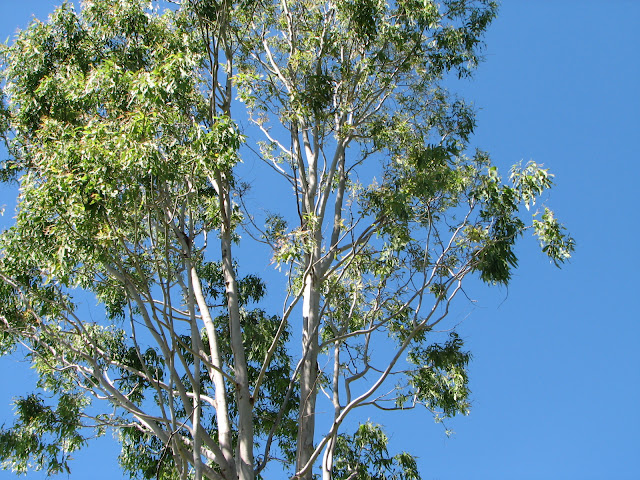 So after the garden was pelted and pummelled during the last few months of the 'wet' season, it will be parched and thirsty for months and months to come.  This is the time of year when the outdoor garden beds have to tough it out ... many of the shrubs and trees are still in recovery mode after the cyclone, so without rain they will take ages to flourish once more. 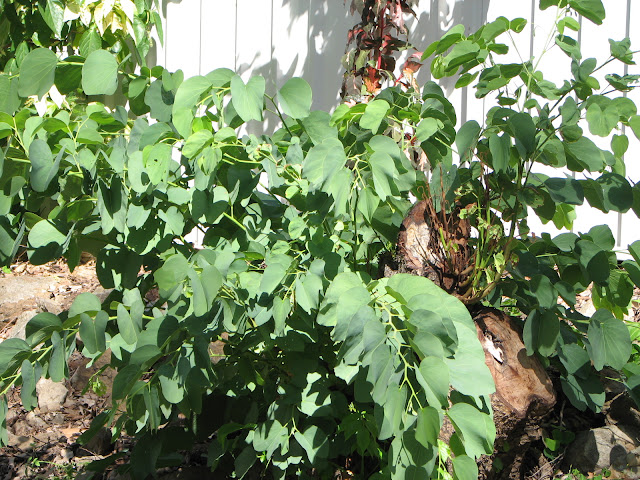 Here's my beloved white Bauhinia variegata.  It's now got significant amounts of re-growth but with the 'dry', I don't think it will get all that much bigger in the coming months. 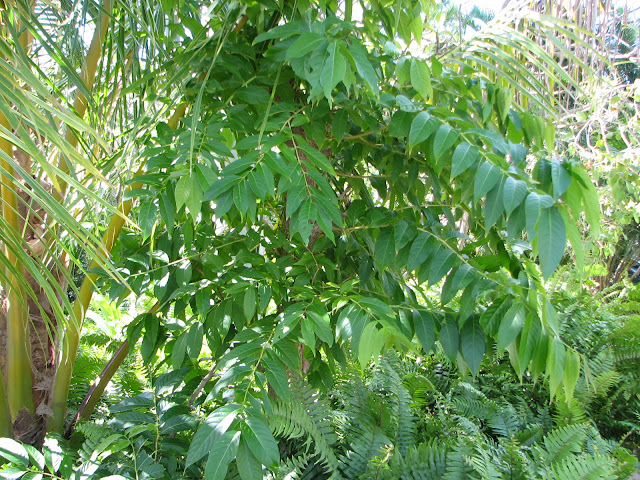 Lagerstroemia speciosa or Queen's Myrtle has continued to recover very well.  It will be interesting to see if all this new foliage growth will in fact start turning into the familiar reds and oranges for our winter.  This is my only tree that I could possibly say gets autumn colours ... except they usually appear in the winter. 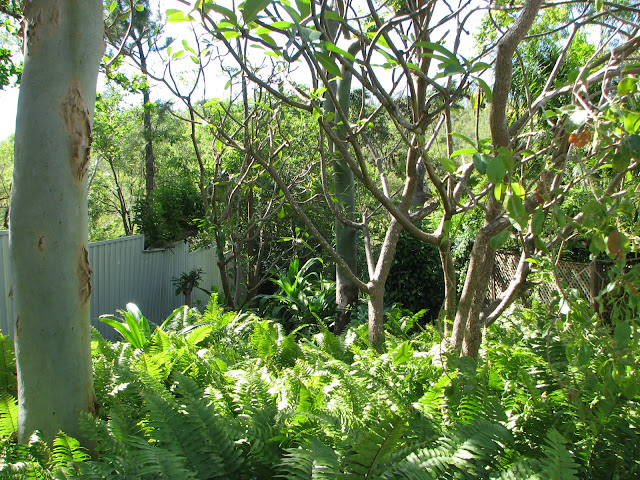 It will also be very interesting to see if my Plumerias will do their deciduous thing this coming Winter as well.  Considering Winter officially begins in June, and these Frangipanis are still trying their best to put on new growth ... will all the leaves fall? 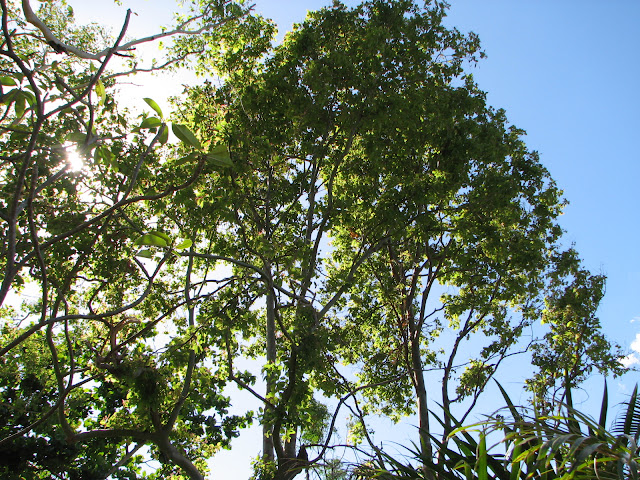 The two Corymbia torellianas or Cadaghi Gums have come back beautifully after having most of their foliage stripped away.  It's nice having some tree canopy back once again in this spot on the property. 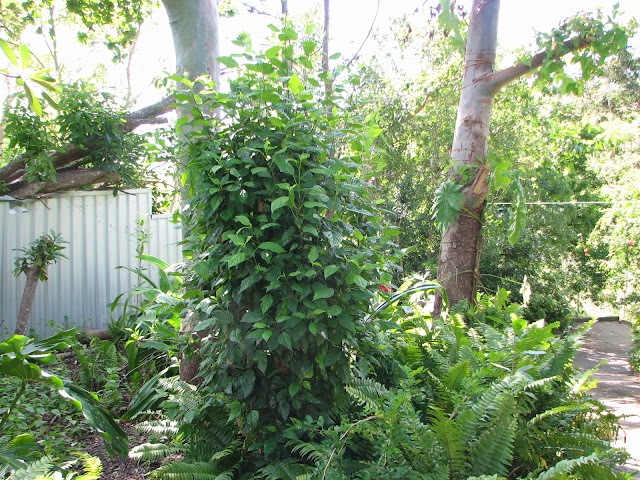 The Hibiscus rosa-sinensis that grows underneath the Cadaghis has come back quickly and is showing a bloom or two here and there. 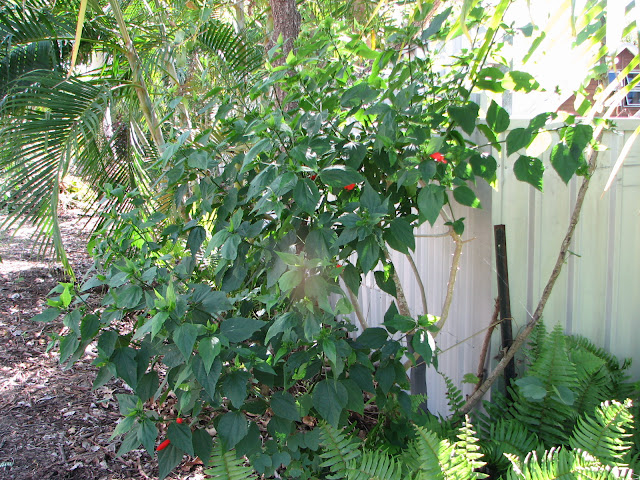 The same is true for the Malvaviscus arboreus or the Sleepy Hibiscus.  It's already recovered and those wonderful flowers and buds are peeping out in between the leaves. 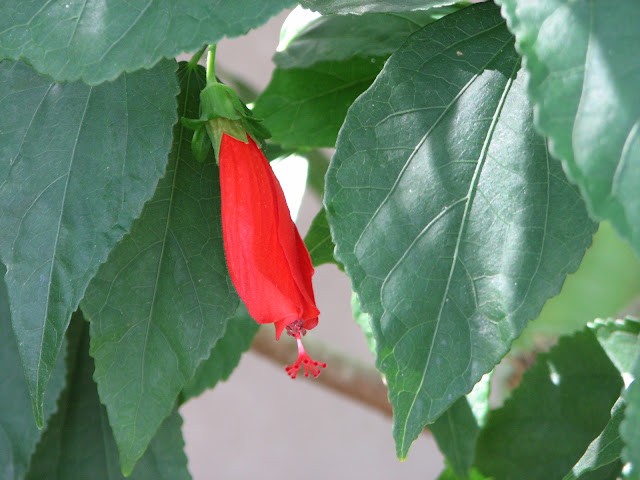 With Cyclone Yasi's destructive winds causing the almost total removal of the tree canopy down the driveway on our property, the driveway garden beds had became almost overrun with weeds.  Finally, with the arrival of dry weather over the last couple of weeks, I've been able to get out there and do the much needed weeding of both sides of the driveway.  It's looking far tidier now. 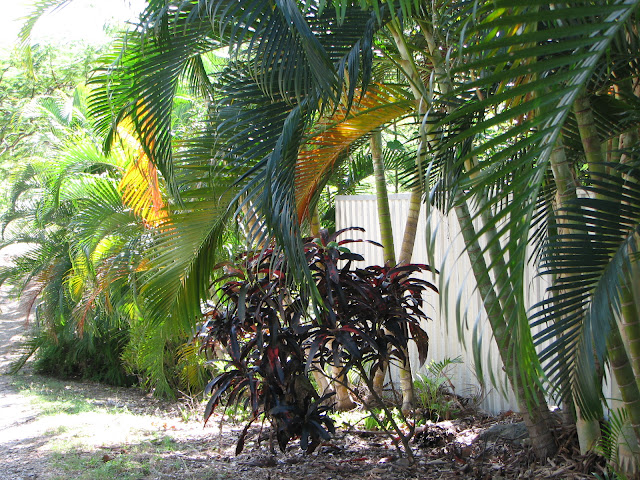 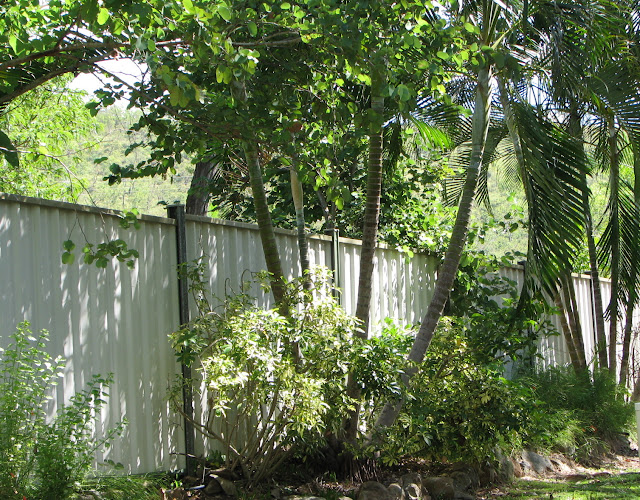 I was accompanied by hordes of lovely little red dragonflies the whole time. 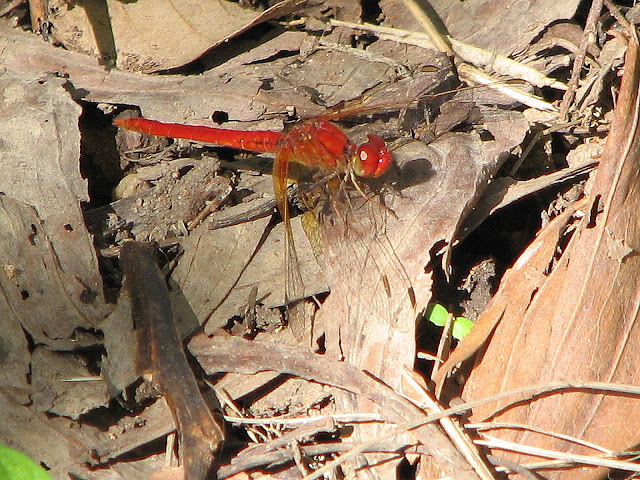 It was amazing just how much was removed ... we thought we had done with having to use the fire pit to burn off garden debris and rubbish.  But no, I have managed to add another little pile to the fire pit after my efforts yesterday and today.

As well as removing huge amounts of weeds, I did a bit of trimming on some plants that were not included in the post-cyclone clean-up.  Mainly a Croton, the Pseuderanthemum, the Ming Aralia and the Graptophyllum.  They were all looking decidedly leggy and scraggly. 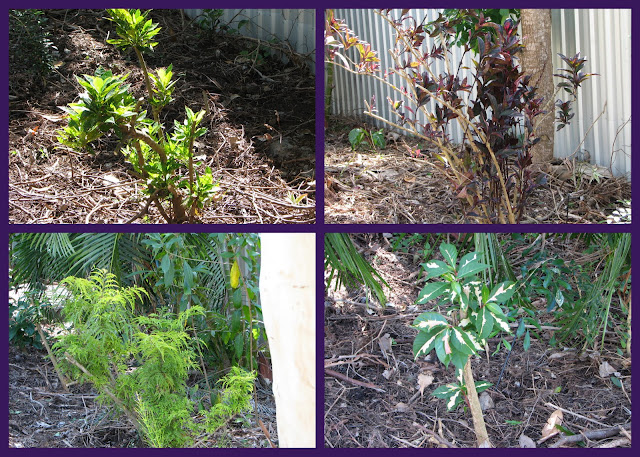 I found a couple of Philodendrons that I'd thought I'd lost.  Obviously they loved the long 'wet' season and had come back in some what were once hidden spots, but not hidden now after the weeding effort. 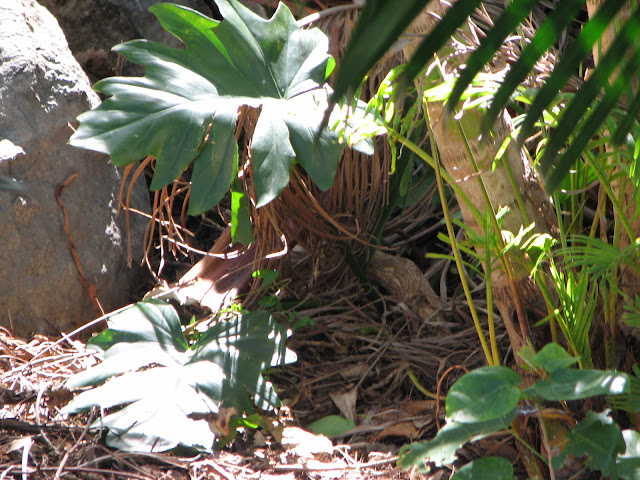 I also finally removed most of the horrid pile of Pedilanthus tithymaloides 'variegata' - the Slipper Plant - which had taken over one section of the long driveway bed and was looking absolutely terrible.  I pulled out most of it by the root ... moved one tiny little piece back towards the fence ... and dug over the spot where it had been growing. 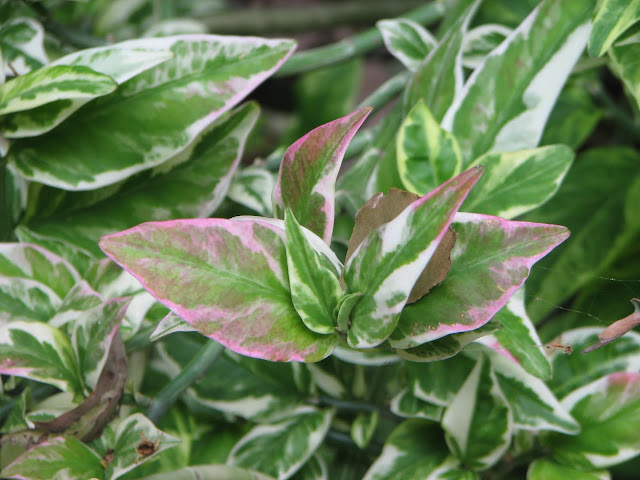 I'm looking to plant more Crotons and Pseuderanthemum in that section.  However, there will be no planting happening just yet.  Along with the new section added to the driveway garden bed closest to our car shed, the spots that need planting up will have to wait until the 'dry' season is over.  It's no use trying to start plant at this time of year here in the dry tropics ... it would add extra cost to our water bill trying to keep them alive over the next nine months or so when we receive little or no rainfall! 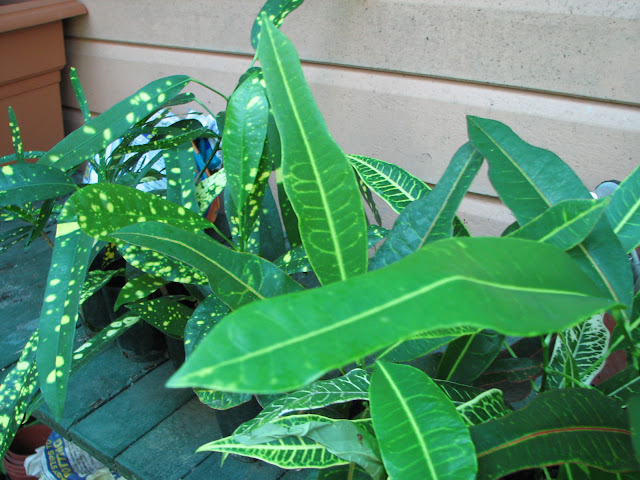 In the meantime though, I have quite a few Croton cuttings that have taken off and need re-potting and lots of feeding so they're ready for planting during our rainy season.  I will also be on the lookout for some groundcover for both these spots.  Perhaps some native Viola for the shaded sections ... will think about the sunny sections.

In other spots around the property, it's lovely to see the Acacias are starting to bloom once more. 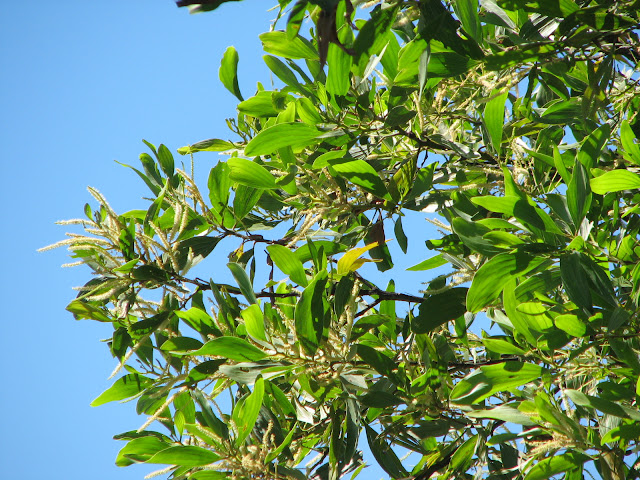 This is Acacia mangium showing its' lemony-yellow rod-like flower heads ... 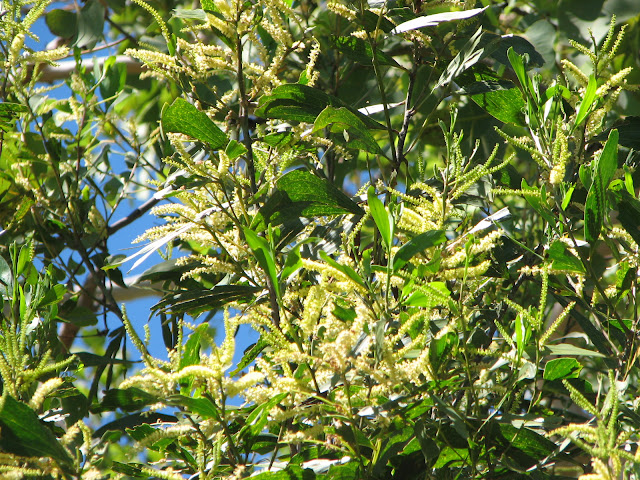 ... and Acacia auriculiformis beginning its' wonderful display.
Posted by BernieH at 9:37 PM