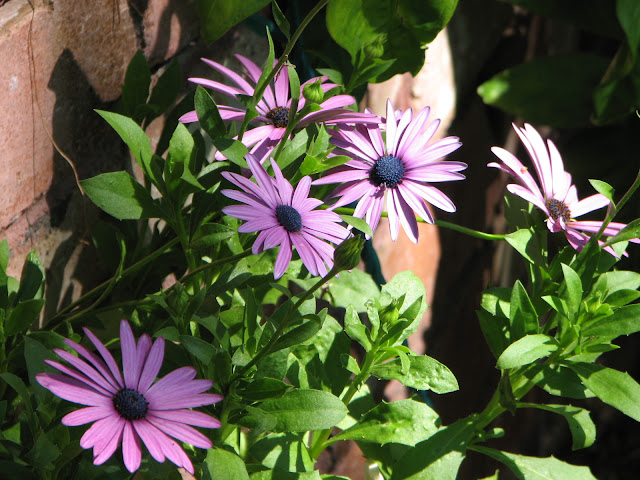 I'm taking the opportunity to catch up with my Snapshots series, highlighting what's flowering each mid season here in my corner of north-eastern Australia, whilst joining in Garden Bloggers' Bloom Day.  Even though it's mid-August now, things are almost exactly the same in my garden. 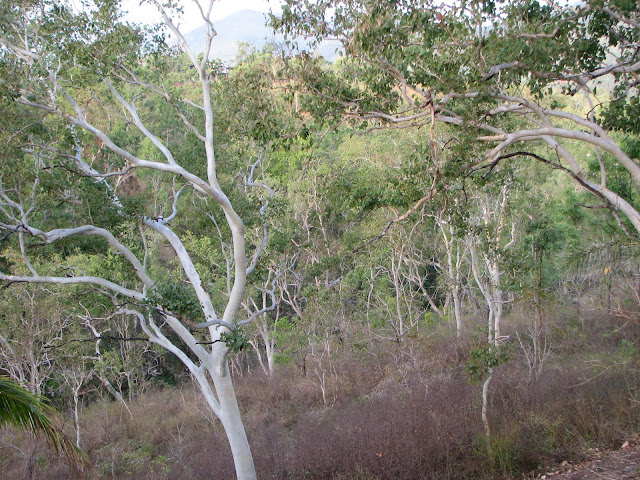 Yep, dry is the word.  This was (and still is) the view out onto the bushland surrounds during mid-winter.  The theme ... brown, brown with a smattering of grey-green.

The 'dry' season was well and truly underway by the beginning of July.  We did receive a little rain during June (our beginning of winter month), but that was mostly light showers.  The total was around 15 mm which is only half an inch!!  For July the total rainfall was 1 mm, which is the usual here during our winter, spring and early summer.  Compared to the same time last year, it seems our 'dry' season weather is back to normal.  The 2010 'dry' season was unseasonably wet ... one of the wettest on record ... but that has not been repeated in 2011.  This is what our winter is typically like.

Daytime temperatures mostly hovered around 25 deg C (77F) and the night-time temps dipped to around 12 deg C (53 F), although we did have a rather chilly 7 deg C (44 F) one night!!! That was a definite winter PJs and doona night! 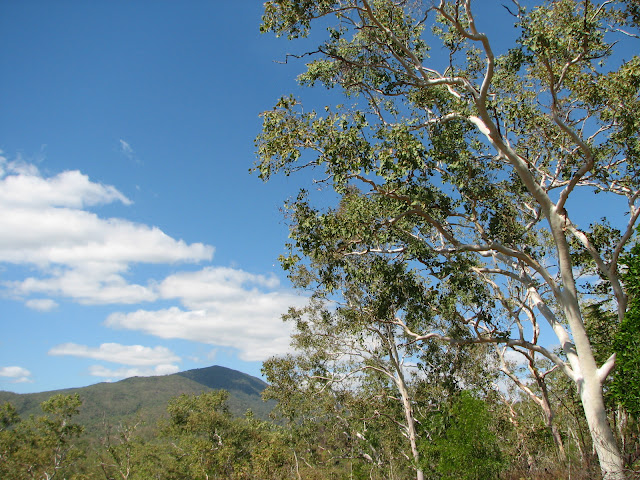 Skies were mostly clear and blue ...

... although there were a few hazy days during the last couple of weeks of July, as there had been a few controlled burn-offs in various locations on the outskirts of our city, including the ranges that circle our outlying suburb, seen in the photo to the left.

Starting with the trees around our property ... what was flowering?

Not much!  That's pretty much the short answer to that question.  My usual winter bloomers include the Bauhinia variegata 'Alba', the Spathodea campanulata and the Tabebuia impetiginosa, but thanks to Cyclone Yasi, none of these trees were putting on their usual winter display this year. 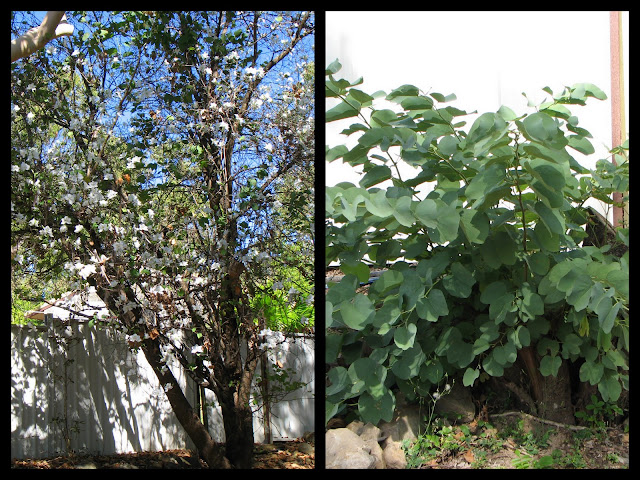 On the left is my Bauhinia in full bloom last winter, on the right is the stump this winter. 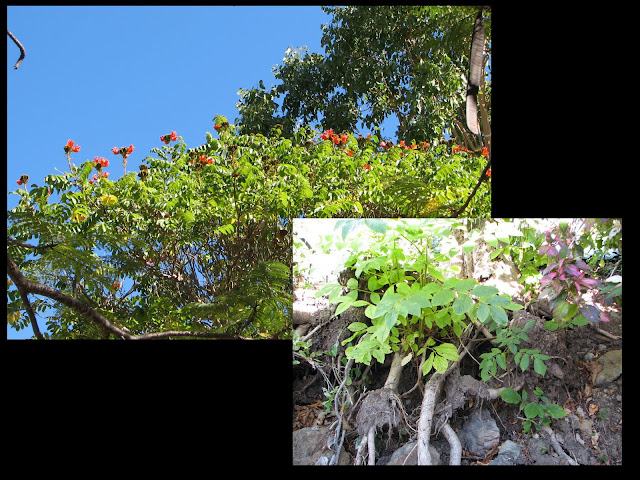 On the left is my Spathodea or African Tulip Tree top covered in flowers last winter.  On the right is the upended stump lying on its side sprouting new growth.  This is a one tough tree.  Despite the fact that most of the rootball is exposed, this thing is still trying to grow.  We've tried digging it out, but it's growing in a hard-to-access spot so all our efforts have been in vain.

The Tabebuia was left a little lop-sided, with one side rather damaged after the cyclone.  The other half was showing just a few flowers here and there though, which was delightful. 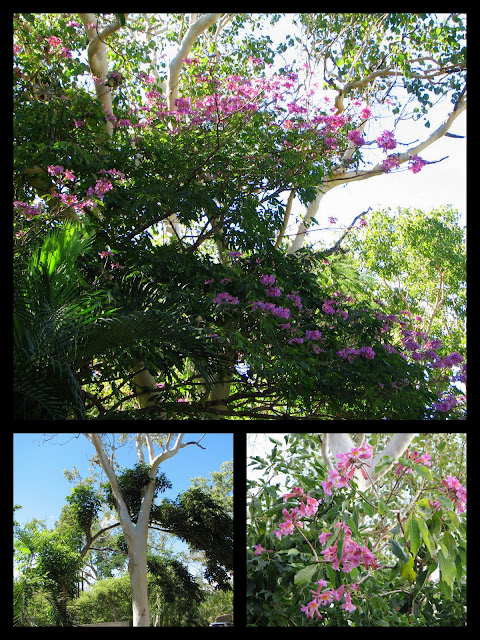 At the top is the Tab in bloom last winter.  Looking to the bottom of the collage, over on the left, you can see the lop-sided Tab this winter with just a smattering of the lovely pink blooms.

Now onto the shrubs ... what was blooming?

The many Duranta repens shrubs growing down the driveway were growing taller very slowly, and at least one of them was showing the gorgeous purple and white flowers once more.  I really have missed the view of all the flower sprays on the Durantas as I drive in after work. 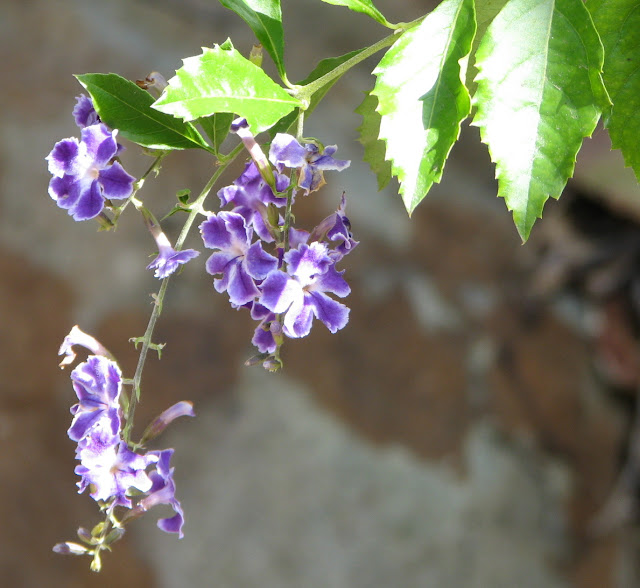 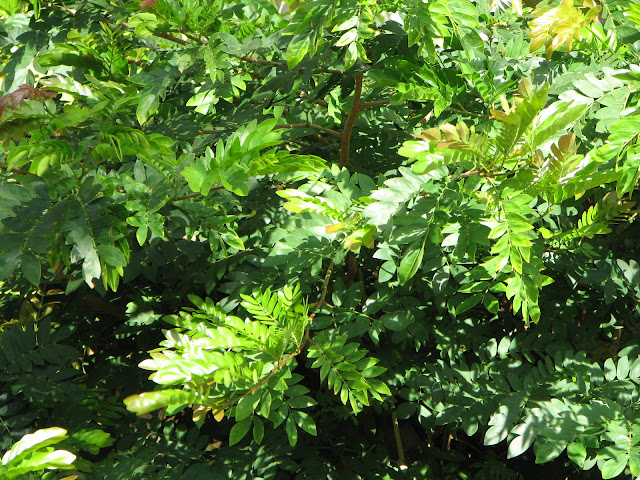 Whilst the Pink Calliandra, Calliandra surinamensis, was recovering beautifully and really starting to fill out once again, it hadn't shown any of its usual winter blooms. 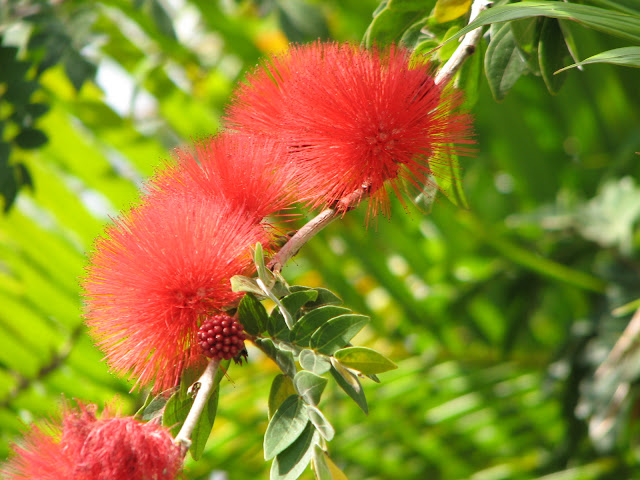 The red Calliandra, Calliandra haematocephala, escaped damage during Yasi and had carried on as usual, showing lots of beautiful powderpuff blooms this winter. 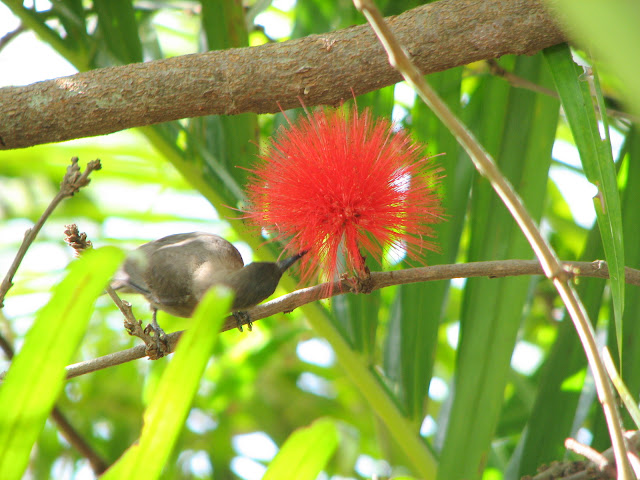 It's also a great food source for the nectar loving Dusky Honeyeater. 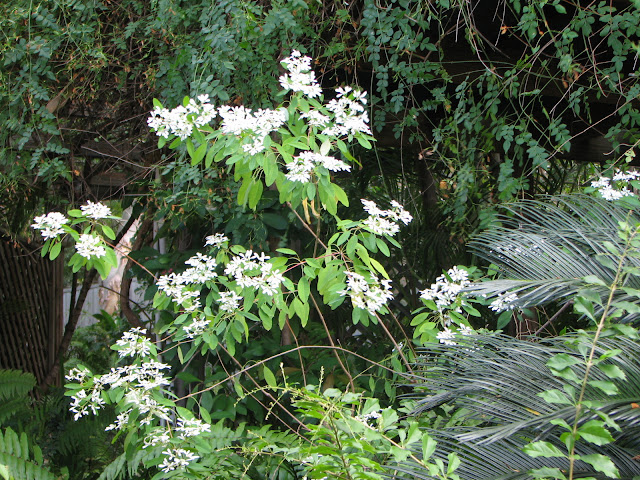 Out in the courtyard, the Euphorbia leucocephala or Snowflake Bush did put on its winter show, although not quite as full and lush as usual.  Still, it's always wonderful to see those brilliant white bracts and teeny tiny white flowers. 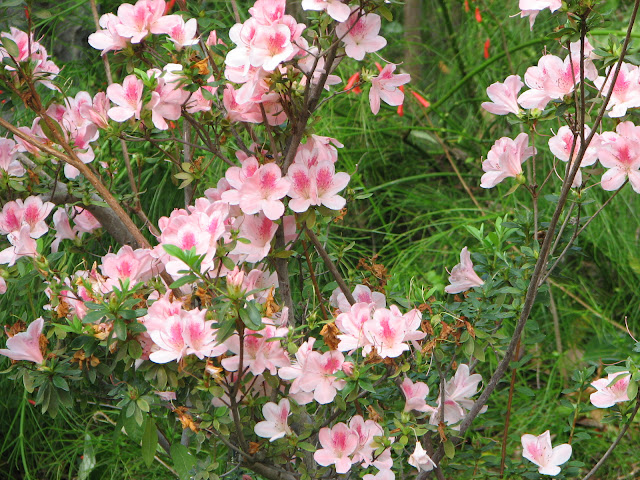 The dwarf Azalea in the front garden bed, though, really outdid itself this winter.  I've never seen so many flowers on it before.  It rather took me by surprise considering the lashing it received during the cyclone.  It is one hardy little plant. 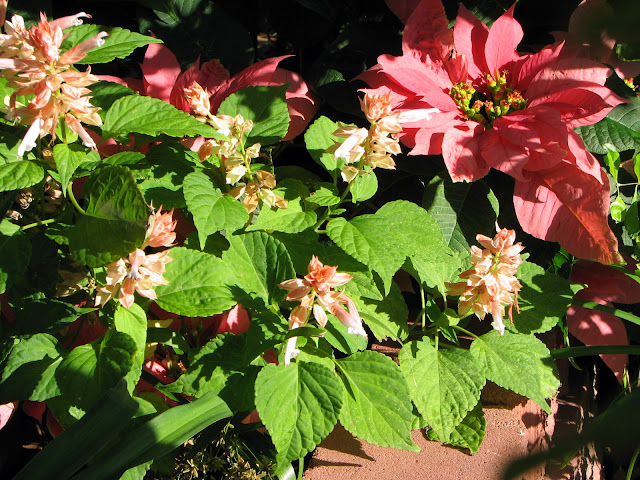 The Euphorbia pulcherrimas were in bloom.  My favourite is the pink, and it is just forging ahead very well.  It's now reached around a metre in height and was literally covered in bracts and flowers.  The red Poinsettia did flower, but it suddenly took a turn for the worse a couple of weeks later.  The prognosis is not good and I'm not sure what the problem might be. 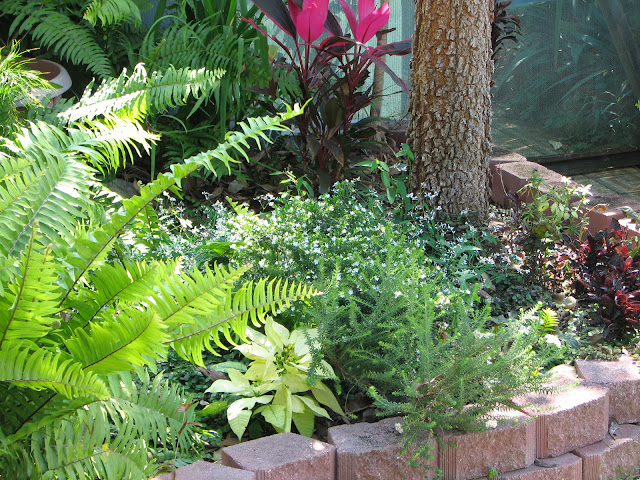 The newly planted dwarf white Poinsettia, seen above in front of the white Cuphea, has settled into its spot well and did show its very first bracts and blooms this winter.

Pentas were not in bloom as they had been totally infested with some horrible pest and had to be cut back drastically and treated.  I'm sure they'll be back in full bloom by the spring. 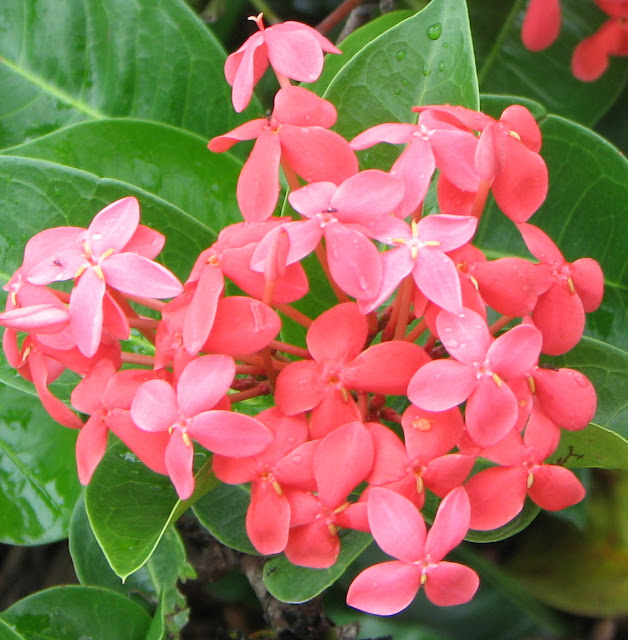 The only Ixoras showing blooms were the pink in the front garden bed and the orange in the courtyard garden. 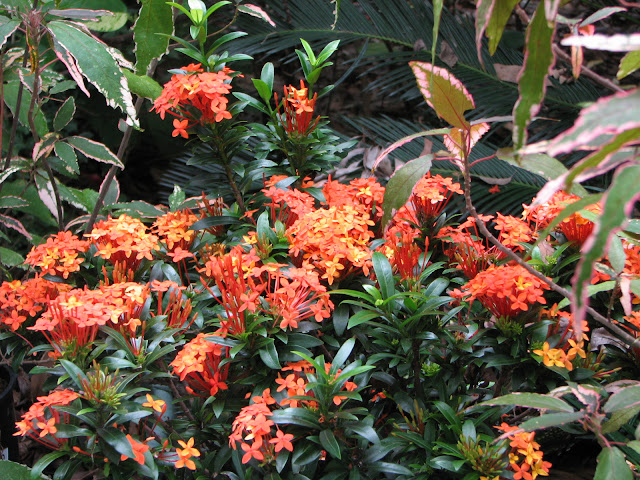 The white, yellow and red Ixoras were all still on vacation. 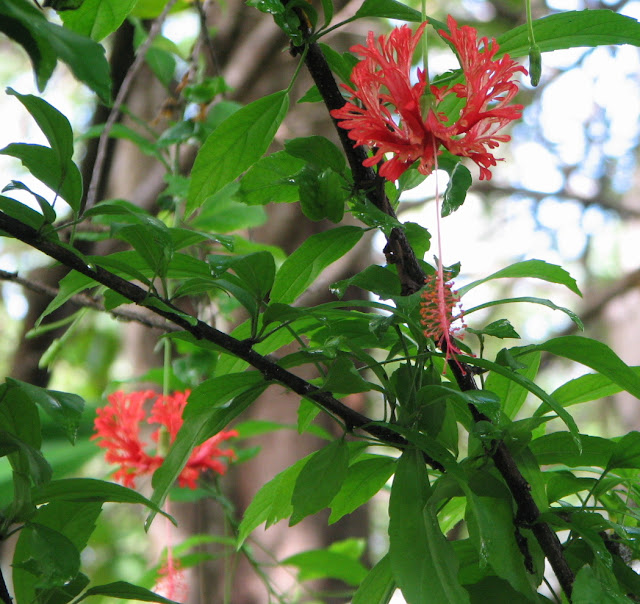 There were a few flowers on the Hibiscus schizopetalus, or Japanese Lantern Hibiscus, out in the courtyard, 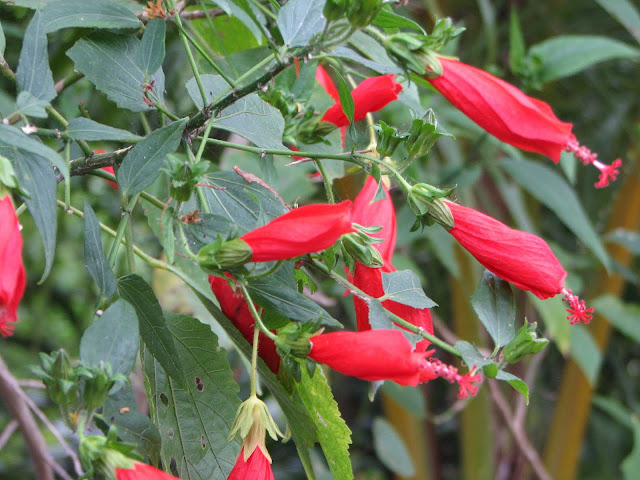 and the Malvaviscus arboreus, or Lipstick Hibiscus, was showing blooms after being cut back post-cyclone. 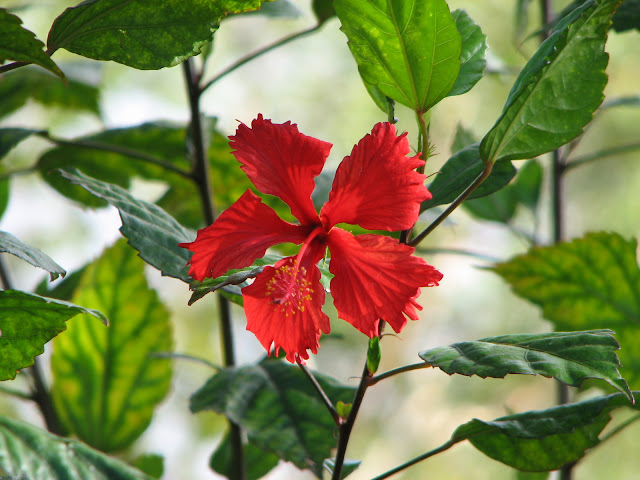 The tall Hibiscus rosa-sinensis in the hillside driveway had also been damaged during the cyclone and trimmed quite a bit, but was throwing out just a few little single crinkly-edged red blooms. 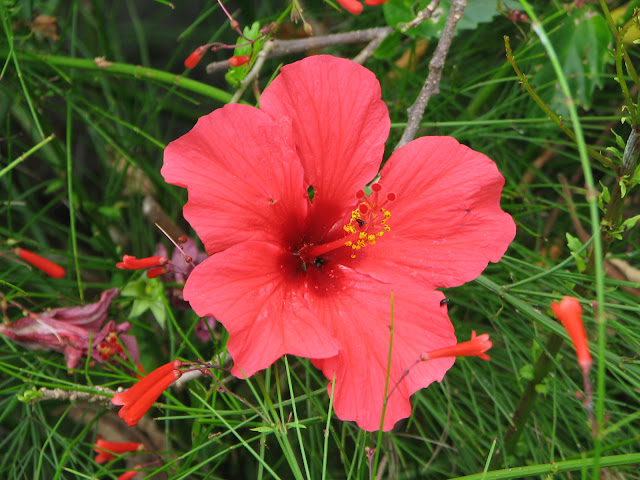 My oldest Hibiscus, growing in the front garden bed, had also been cut back severely, but was blooming again.  You just can't keep a good old girl down!

Out in the Shadehouse Garden ... what was flowering?

The answer to that question is ... not much! 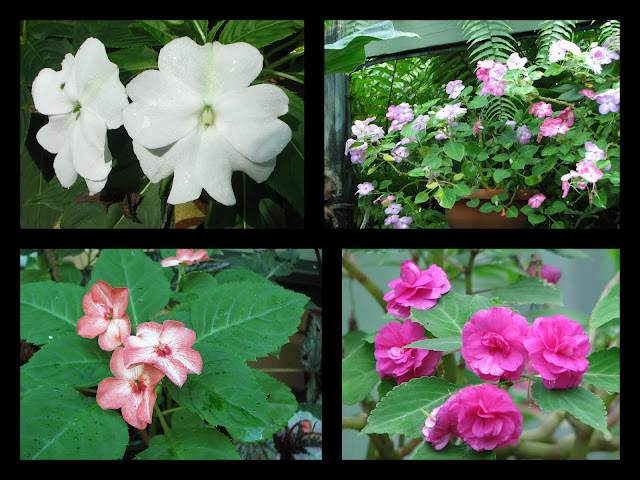 Apart from blooms on the non-stop flowering Dragon Wing Begonias, the only plants showing off flowers were the Impatiens walleriana, the white Impatiens hawkerii ... seen above .. 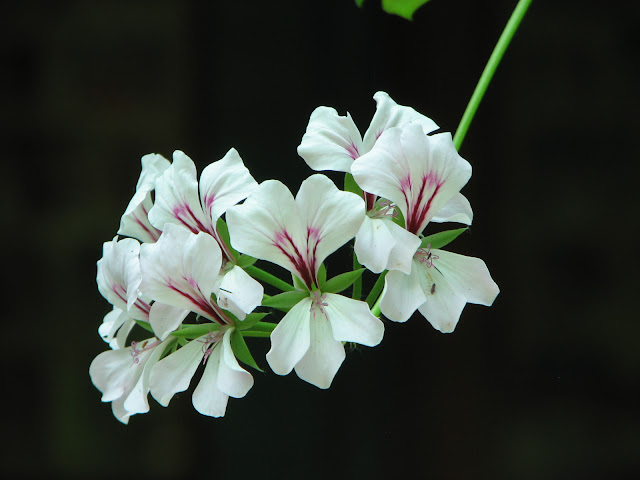 ... and the white Ivy-leafed Pelargonium.

Elsewhere around the place ... 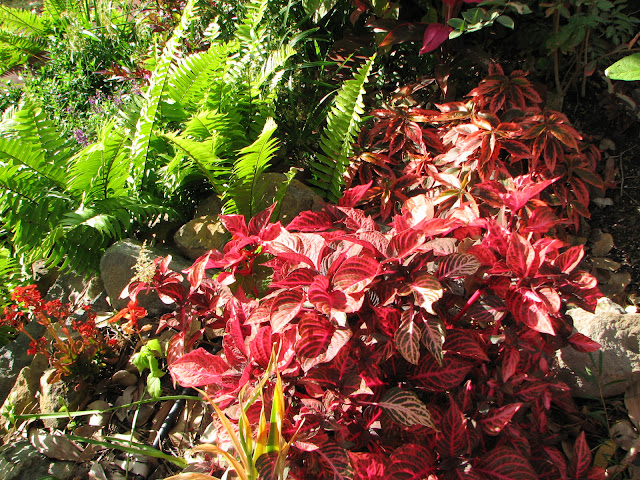 My original planting of red Kalanchoe has died off, but a slip I shoved in the ground took off and was in flower, as seen to the left of the photo above.  I also planted an orange Kalanchoe blossfeldiana at the same time as the original planting of the red, but it didn't flower this year and is looking rather sick ... it might be time to move it. 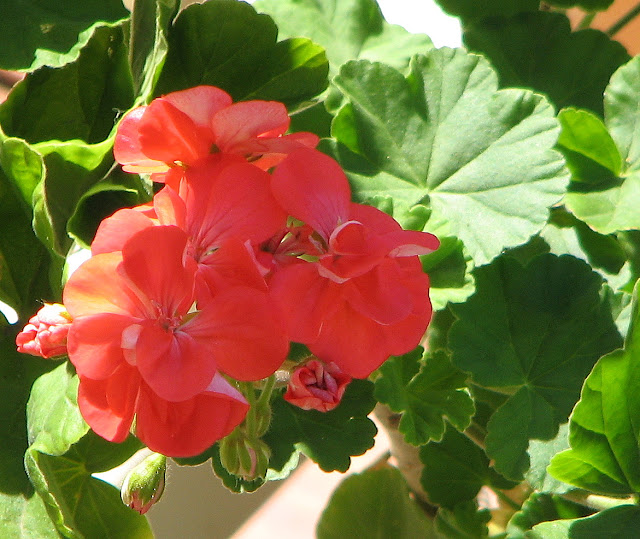 There are also some flowers appearing on my potted Pelargoniums ... 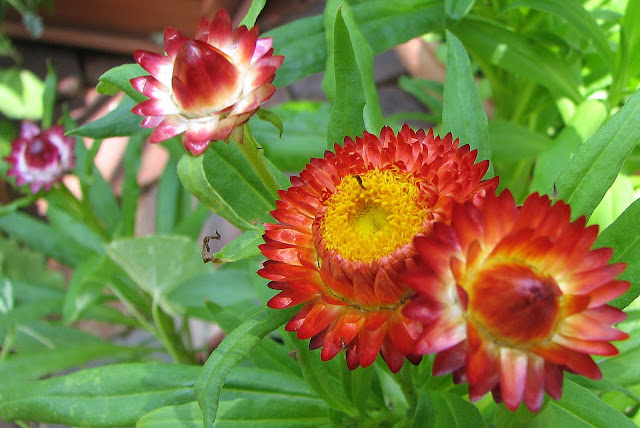 ... and Bracteanta bracteata sitting out on the verandah stairs.

Now, out in the Courtyard Garden ... what was blooming?

I did a quick walk around the courtyard garden with my camera to see what was going on mid-winter. 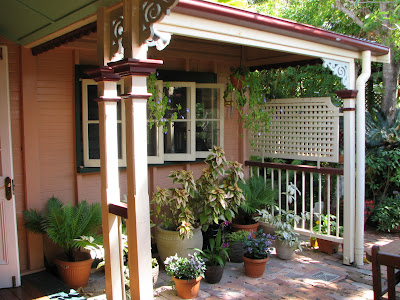 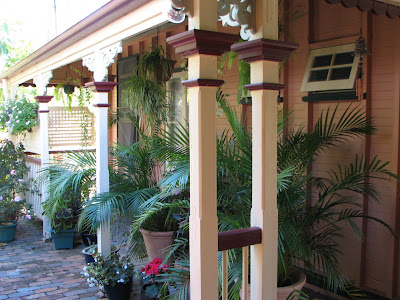 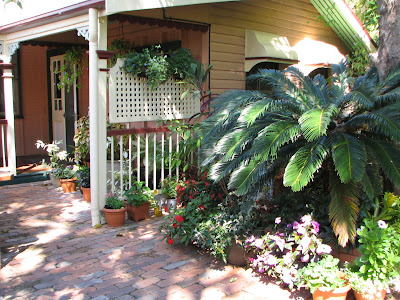 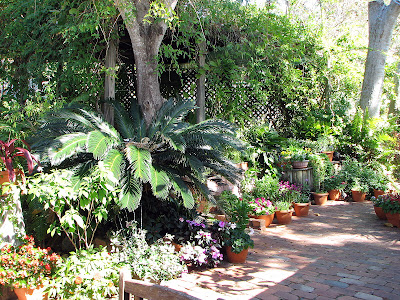 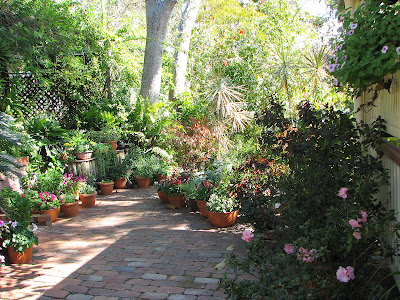 Looking over the courtyard from the seating area.

I also did a wander around with the camera video to record the state of affairs out there.  I do apologise for the squeaky voice in places.  I was just getting over some horrid winter virus when I filmed this clip.  At one point, I had to stop talking because I knew I would start coughing and spluttering, which wouldn't be a fabulous addition to the clip.

Anyway, here's a look around the courtyard in July ... mid-winter.  (NOTE:  before you play this clip, you will need to scroll down and turn off the Playlist at the bottom of the page).