Continuing my 'Snapshots' series for this mid Spring month.  Yes, October Downunder is the middle of our Springtime.  In my north-eastern corner, Summer has gate-crashed the Springtime Weather Party.  It's heating up and the sun is practising its fierce glare.

Conditions during October?
It's our 'dry' season here, and the grand total of rainfall during Spring so far  .... 0 inches ... 0 mms.  The last rainfall recorded was mid-April (mid-Autumn), so we've had six dry months since then.  That is the usual pattern for this part of our great country at this time of the year. 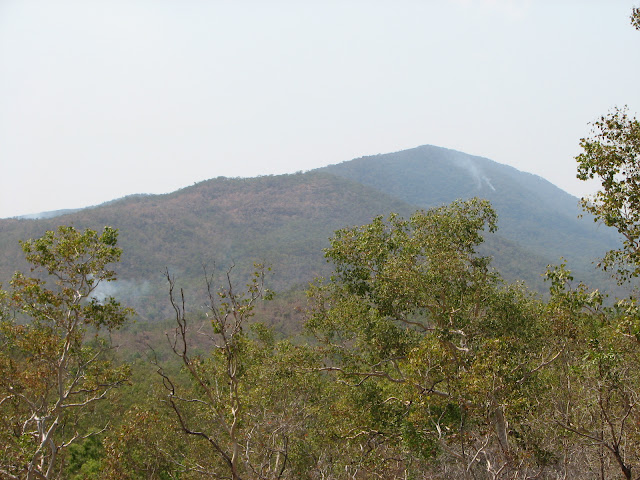 The heavy wet season we had earlier in the year, accompanied the destructive cyclone that hit this area, left a lot of debris and thick grass lying around on the ground of the bushland in the mountain ranges and foothills here.  We've experienced almost non-stop bushfires raging in those ranges for nearly three months now. 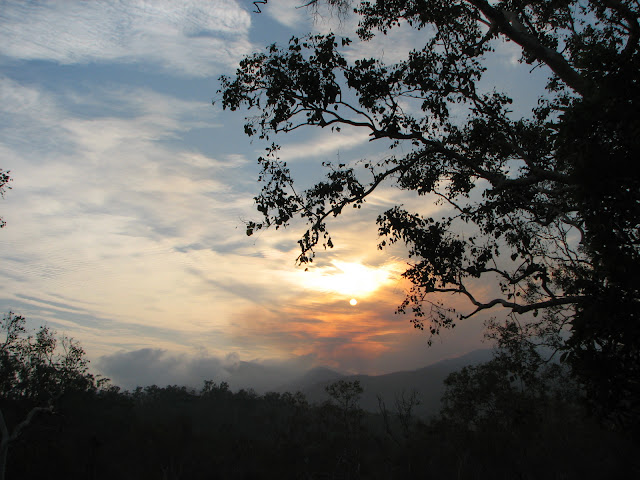 Whilst that's quite some distance away and poses no threat to our suburb, it has meant many, many hazy days and some spectacular looking sunrises.

Daily temperatures during early Spring (September) were delightful, with the mercury rarely reaching 28 deg C (82 F).  Summertime temps. arrived suddenly on the first day of October though.  The high was around 35 deg C (95 F) that day and since then the daytime high has remained around 30 deg C and above.  It's getting decidedly steamy as well, with humidity levels up around 70%.

So here's the round up of what's been blooming since the beginning of our Spring and are still in bloom today.  There are no fabulous long views or fabulous garden beds to see ... that is not my garden.  Most of my plants grow in pots or in a few rather ugly looking beds on this challenging hillside spot.

Starting with the trees around the property ...
On this topic, I do have to mention that so far this Spring, as most trees continue their recovery efforts, there have been some noticeable abscences from the bloom parade.  The Corymbia torellianas or Cadaghi Gums are usually in bloom and so are the Planchonia careyas or Cocky Apple Trees.  But so far, they have both been bareft of flowers. 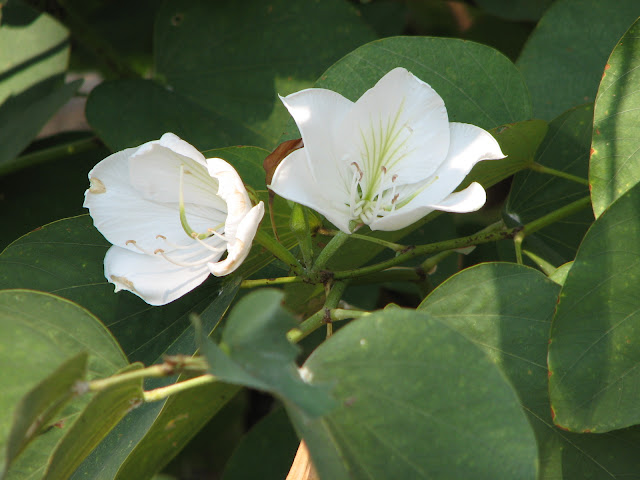 The damaged, recovering Bauhinia variegata 'Alba' has been throwing out  a few flowers here and there.  It's odd on two counts ... firstly, because it's usually a winter bloomer and secondly, each bloom is slightly marked with brown spots.  It's almost as if the tree is saying "This is hard work, given that it's the dry season and I'm still in shock from that horrid cyclone earlier this year." 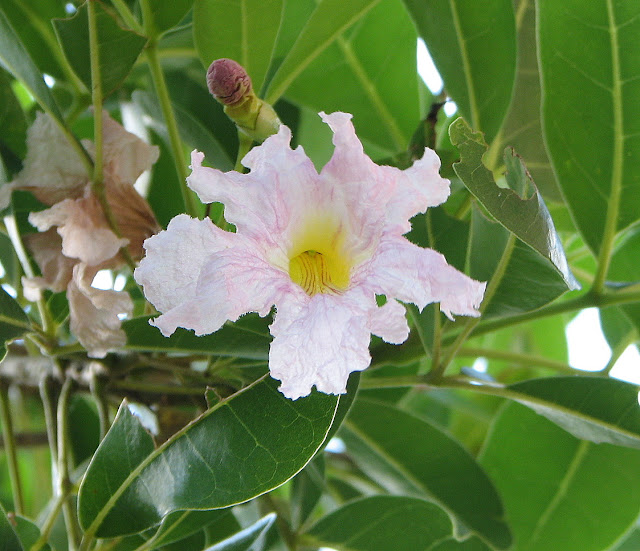 One of the three enormous Tabebuia heterophyllas has only just started to bloom once more. 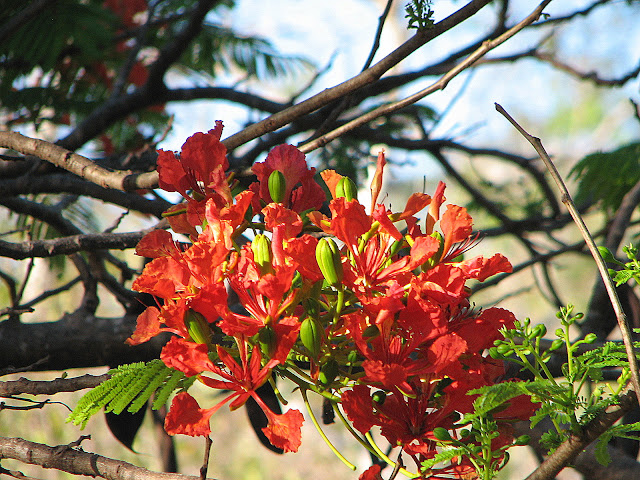 New bright green leaves are now appearing on all the Delonix regias and some flowers have appeared. 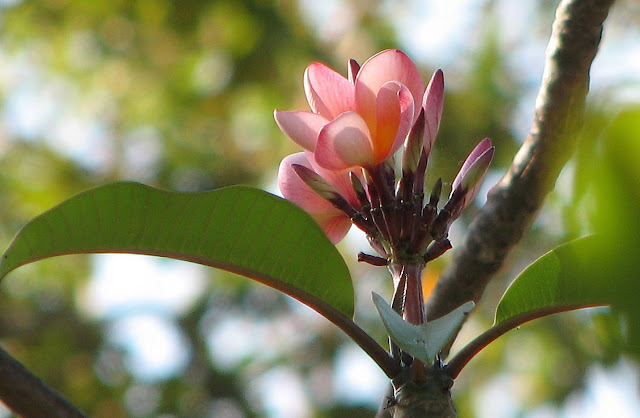 The deciduous Plumeria rubras are both showing off their new leaf growth as well.  One of these trees has even thrown out a flower spray, which is a delightful sight. 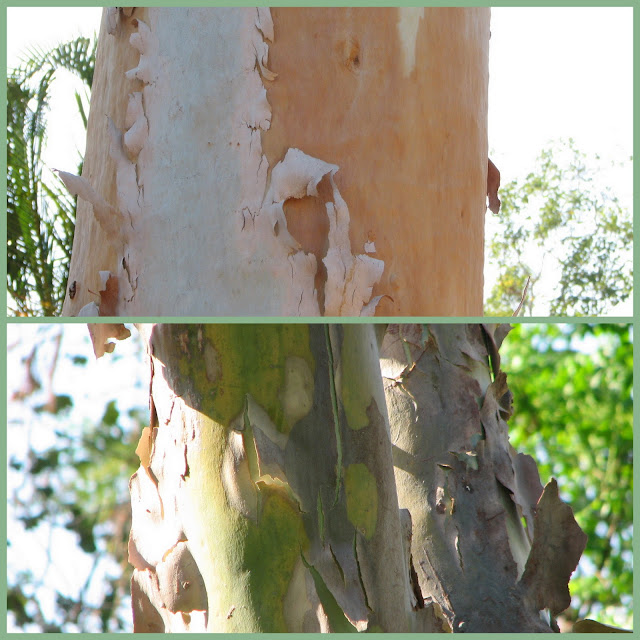 The star trees of the garden through early and mid-Spirng have definitely been the Eucalyptus platyphylla and the Corymbia torelliana, but not for their flower display.  Both have been shedding their old bark and showing off their new trunks.

Now onto the shrubs ... what's blooming? 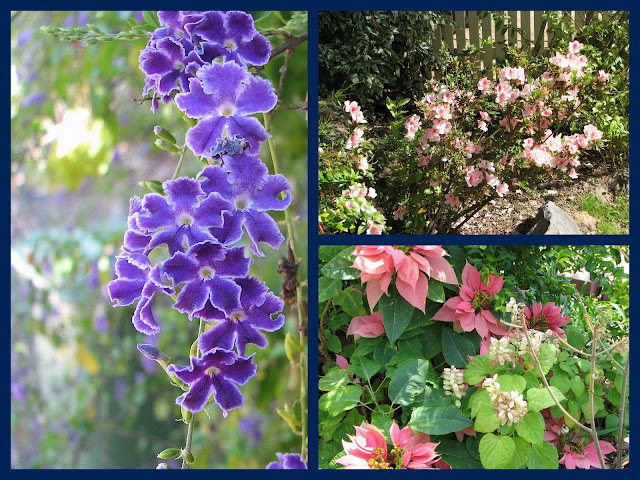 The recovering Duranta repens shrubs are still mostly bare of blooms.  They is just the odd exception, so there's a couple of flower sprays if you look hard enough.  The dwarf Azalea out in the front garden has only just finishing its flowering, and the Euphorbia pulcherrimas are coming to the end of their display as well. 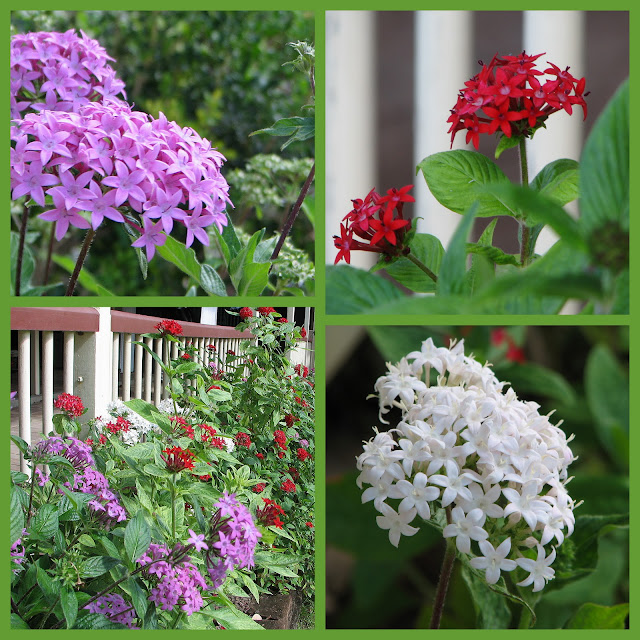 Pentas are now back in bloom after they were cut back severely last season. 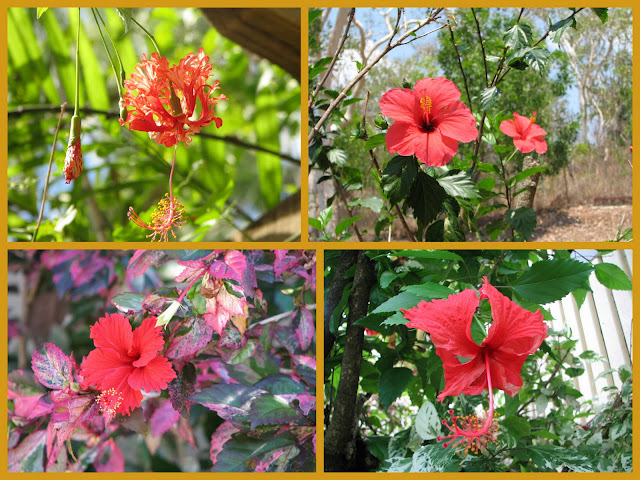 
Out in the Shadehouse Garden ... what is blooming? Right now the fantastic Asiatic Lilies are putting on their great display. 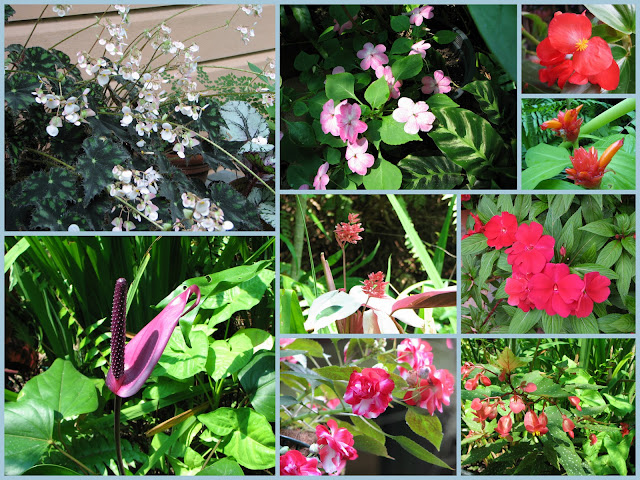 The Begonias, Impatiens wallerianas, the Costus, the Anthurium and the Stromanthe are all in bloom as well.


Now, out in the Courtyard Garden ... what is flowering?

Well, given that the hordes of hungry wallabies have been doing their darndest to nibble their way through most of the plants out in the courtyard, there have been some great shows from the potted annuals and perennials out there. 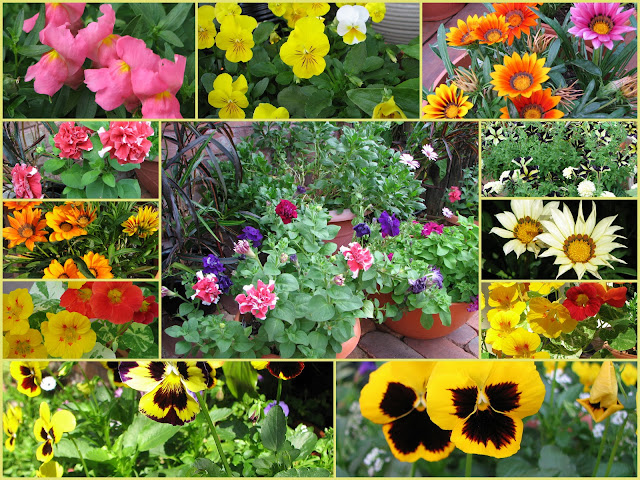 I've been pleased with the show from plants like the Petunias, the Pansies, the Nasturtiums and the Pelargoniums this year compared to last year.  The sunny, dry days have obviously made a difference with these plants.  I didn't bother with any Zinnias, Dahlias or Calibrachoas this year and I haven't really missed them.  It's been heart-breaking enough watching the overnight disappearances of so many plants, and I couldn't possibly fit any more potted annuals on the outdoor table in my efforts to keep them safe from nibbling night marauders. 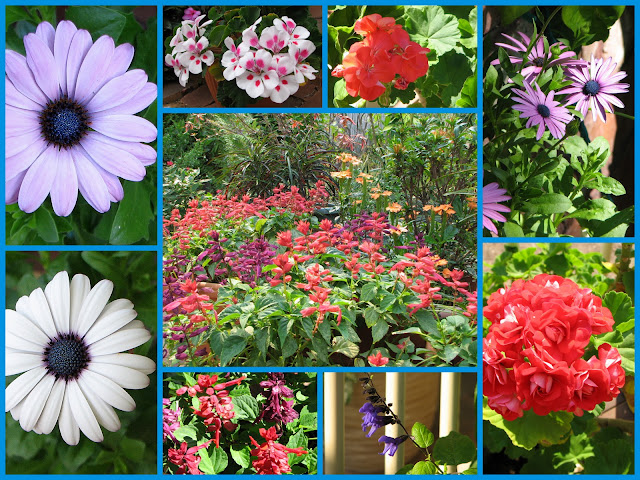 There's all the usual suspects in their pots sitting out on or hanging around the courtyard ... Osteospermum, Salvias, Pelargoniums ... 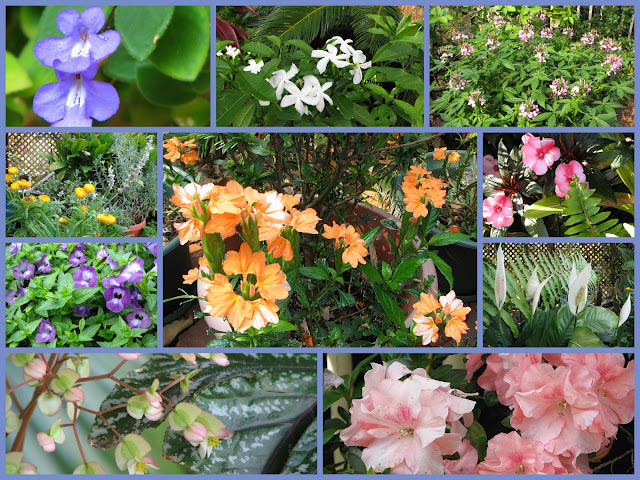 If I wander around the other garden spots on the property, I can also see ... 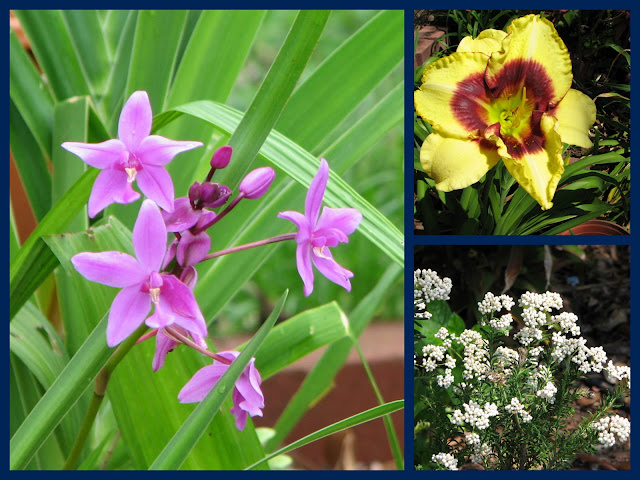 .... Spathoglottis plicata, the first of the Hemerocllis for the season and the brilliant Ozothamnus. 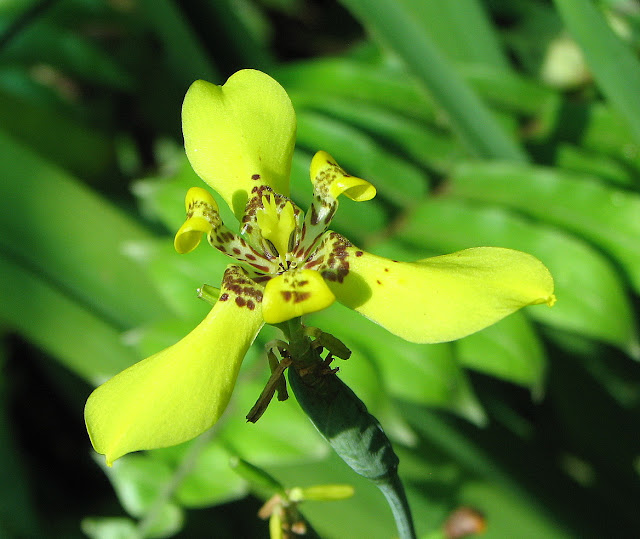 The Neomarica longifolia or Yellow Walking Iris clumps are all in bloom as well.


I'm joining Carol's Garden Bloggers' Bloom Day meme today, so head on over there to see what's blooming in gardens around the world.

I've only just realised that it's also two years ago that I began this blog with a very brief post.  I found myself with little to do that weekend, and decided to give blogging a try, just to see if I could actually work it out all by myself.  I did ... and it's been such a fun activity ever since.  Thank you to all those who have read my posts and have left comments since that first intrepid step into the garden blogging world.  You've made this whole journey a fantastic experience.