So ... We Had A Little Severe Storm Today!

It has been raining here for non-stop here for over a week now ... and I mean non-stop!  I added a post just this Sunday gone all about the rain we had received since Thursday last week ... Thursday to Sunday over 236 mm fell, which is over 9 inches of rain.

Then on Monday another 75mm, around 3 inches fell from the heavens.  But that wasn't the end of it.  Yesterday, we experienced 150mm or 6 inches between 9.00 am and 10.30 pm, when we retired for the evening, and it was still bucketing down.

Sometime around 4.00 am this morning the wind suddenly whipped up at our place.  I could hear the cane furniture out on the verandah being moved around, and I know I heard things falling out in the courtyard.  The rain was pelting down so hard that I vaguely remember thinking ... hmmm, hope my plants are standing up to this!   But this being the tropics and the 'wet' season, storms are not at all uncommon, and I just rolled back over and resumed snoring!

When I finally did awake just after 6.00 am, it was still raining heavily and I could hear the roar of the rushing water in the seasonal creek down at the bottom of the hill that our house sits on.  This was the scene in the front yard as I walked to the front verandah. 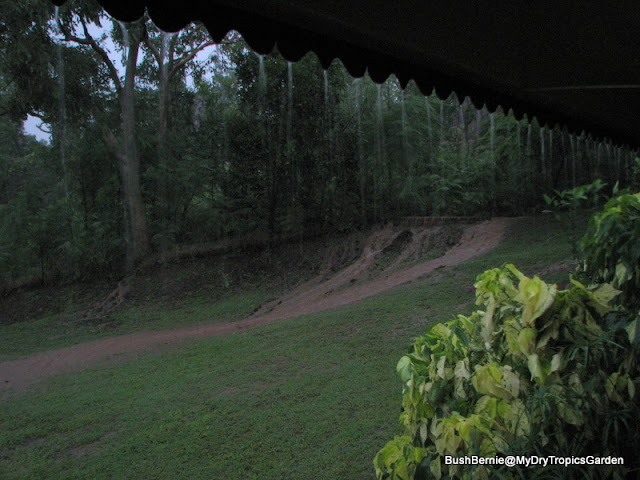 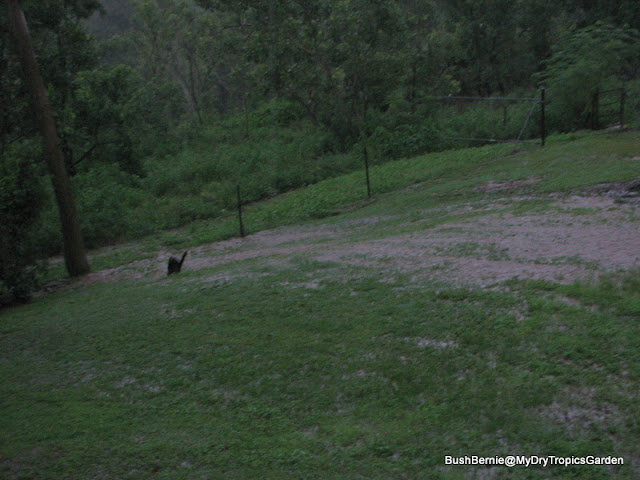 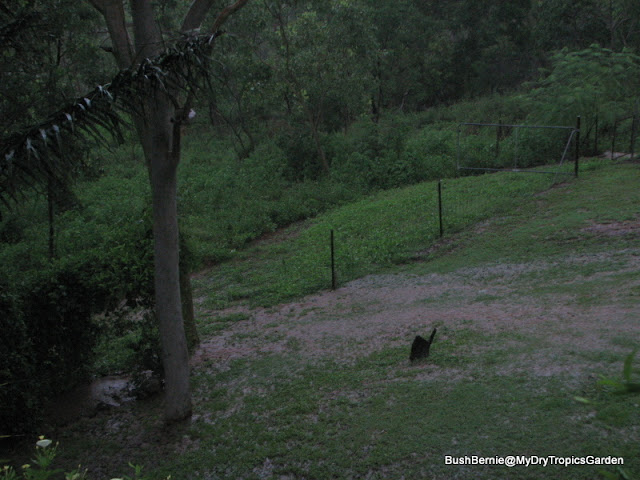 Mmmm!  I thought!  We have had some really decent rain overnight!  I decided to grab the umbrella and take a walk.  The rain had lightened a little, so out I went to check out the conditions. 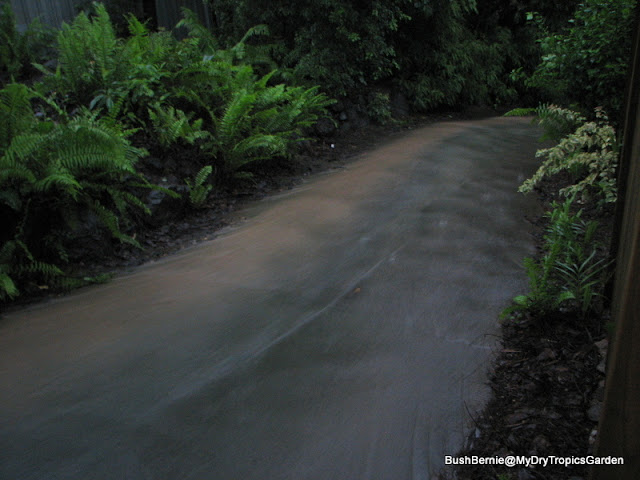 There was a wall of water rushing down the cement driveway.  Here's a little clip ...


There was just so much water running every which way all around our property. 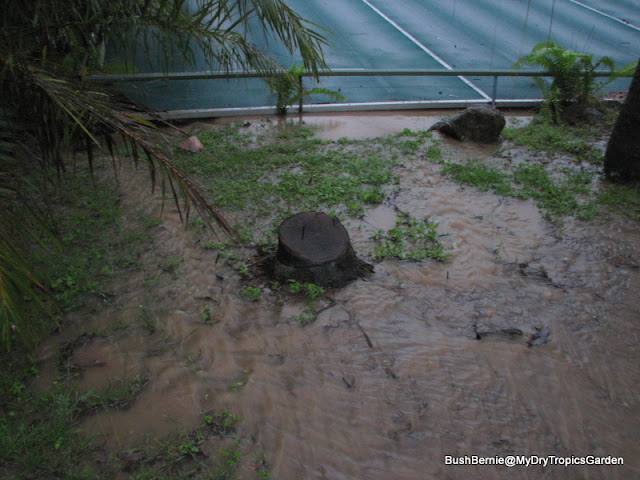 There was a river tumbling into my shadehouse garden. 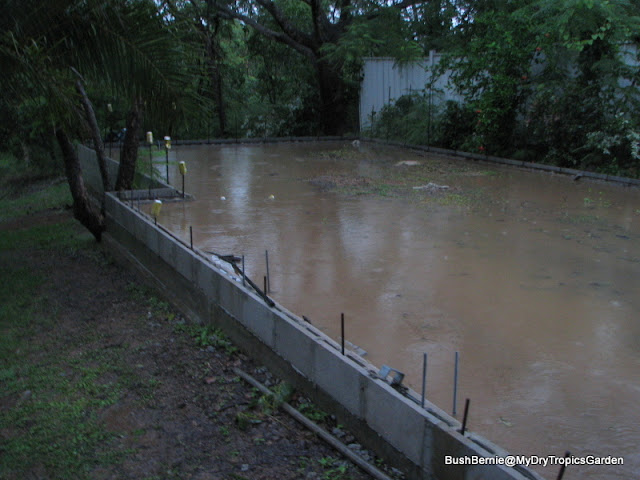 We suddenly had a swimming pool where the half-finished car shed sat! 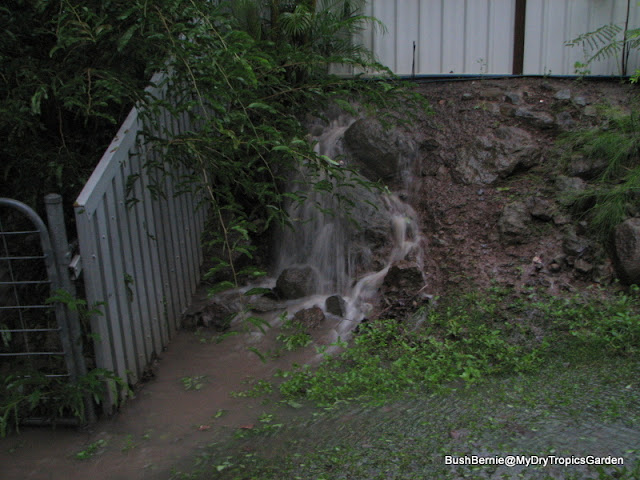 The waterfalls had double in size, 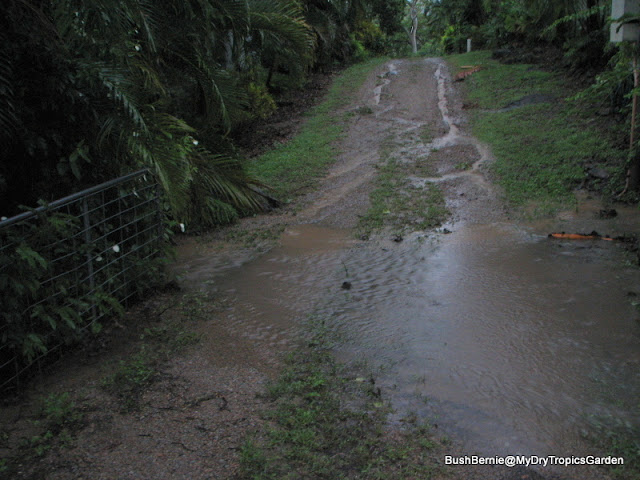 and the lakes of water had suddenly grown much larger.

This was the waterpark feature at the front gate ...


and here's a look around as I strolled from the front gate, down the driveway to the front yard.

When I returned inside and turned on the television to catch the early morning news, I realised that my city had just experienced a severe freakish storm ... not a cyclone, but a tornado!  Apparently the winds reached speeds of around 130 to 150 kms an hour and it had cut a sway through a couple of the suburbs closer in towards the city.

Here's the radar image as the storm hit. 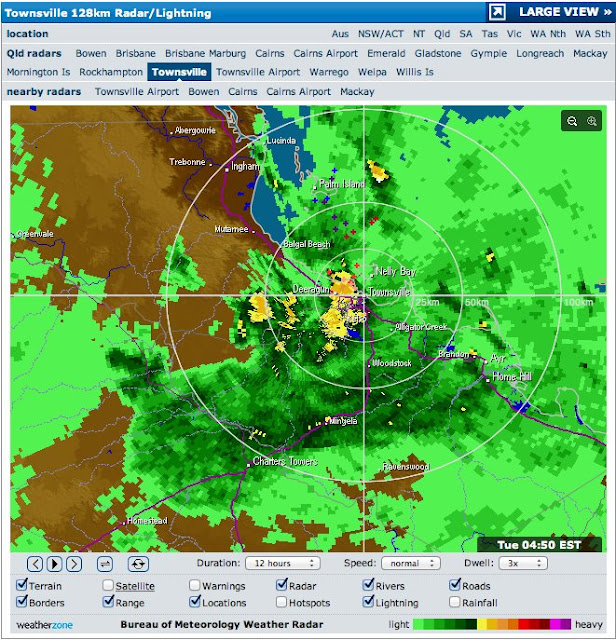 Houses were unroofed.  Trees were ripped out of the ground.  Objects were picked up and dumped streets away.  Powerlines were strewn across streets.  The structural damage caused by this freak storm was actually worse than the structural damage caused by Cyclone Yasi last year.  Despite the difference in size, this little storm packed a real punch.  Of course, Yasi affected a much, much larger area, but the damage here in Townsville was mostly to powerlines, light poles, sheds and trees.   There was indeed a lot of destruction of the vegetation, but very few houses or businesses badly damaged.

Back then we knew Yasi was on the way, and we were prepared.  This time, however, there was no warning at all.  Unfortunately the area of the city that was hit by this mini tornado was one of the less fortunate neighbourhoods, where people don't have fancy homes and really don't have all that much in the way of possessions or assets.  It's going to take quite some time for many of these people to actually get back into their homes and get back to their usual daily lives. 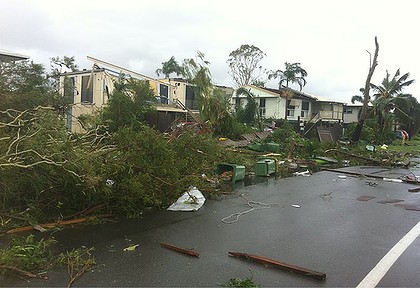 It was hard to take it all in.  These suburbs are about a 30 to 35 minute drive away from where I live.  In my outlying rural suburb, there was just a whole lot of water covering the roads and covering people's yards and properties.  Despite the fact that the rain was still bucketing down, I decided to go into work.  There was water everywhere, but I made it through. 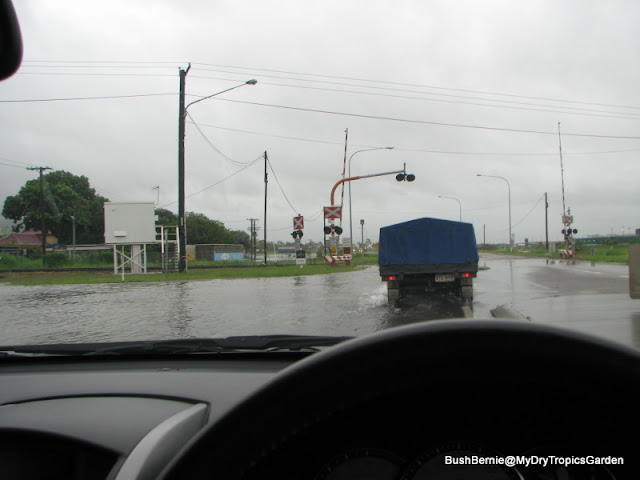 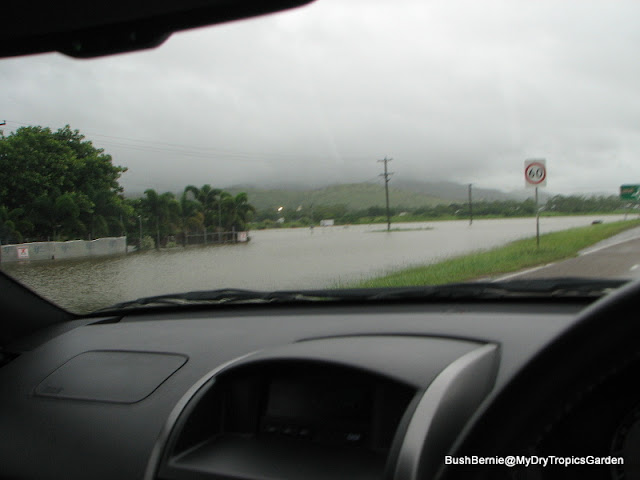 Yet another exciting day in the tropics of north Queensland.  I wonder what tomorrow will bring.  Anyone dying to visit???
Posted by BernieH at 10:05 PM