How quickly things can change here in the tropics. 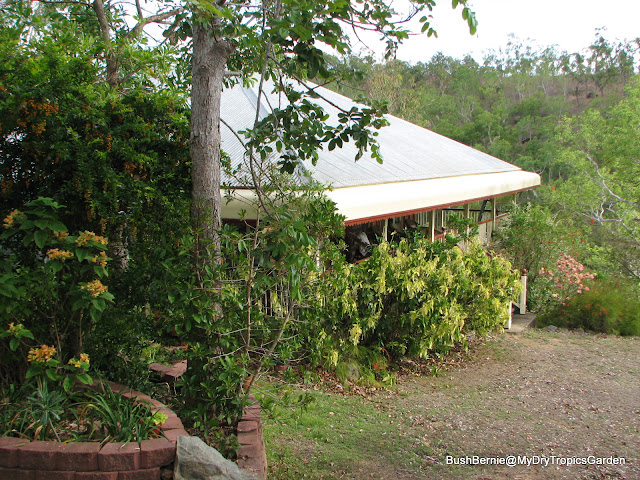 This was how part of the front yard looked about a week and a half ago.  We were at the end of our long nine-month dry season, with a few light showers passing over and sprinkling a few limp little raindrops around.  The only patch of green grass was the area in front of the tiered garden beds where the run-off ends up from the watering system set up in the garden beds.  You can also see how the trees on the other hillside were looking a little bare as they had dropped much of their foliage during the dry season. 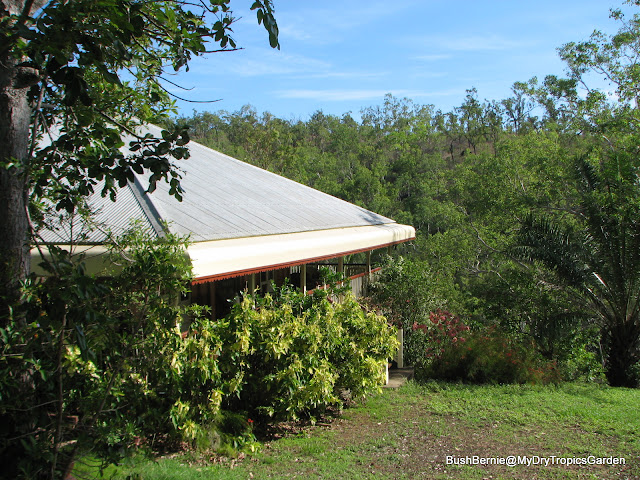 It never fails to amaze me just how the place can suddenly look a whole lot greener after a bit of decent rain.  As I mentioned in my last post, we had been waiting patiently for good rain after another long, long dry season.  While there had been showers coming and going, nothing worthwhile had eventuated ... well nothing that actually penetrated the baked earth.

A week later, and the story is a little different.  We had our first taste of this year's wet season last week.  Cyclone Oswald had been hanging around the Gulf for a little while, and then when he headed inland he turned into a monstrous monsoonal low system.  He's been slowly making his way down the eastern coast, and all cities and townships have had a good soaking. 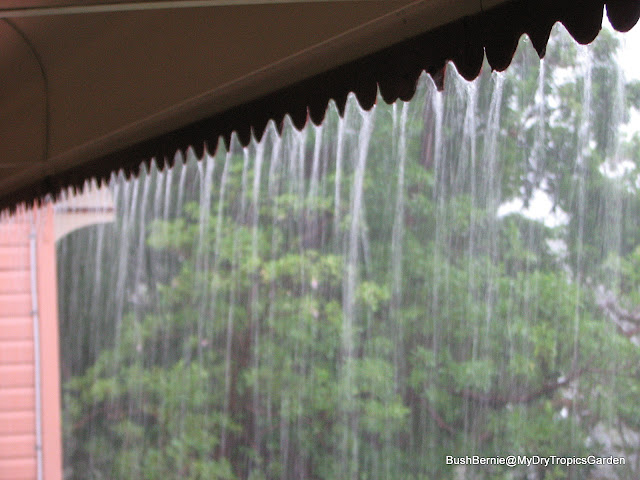 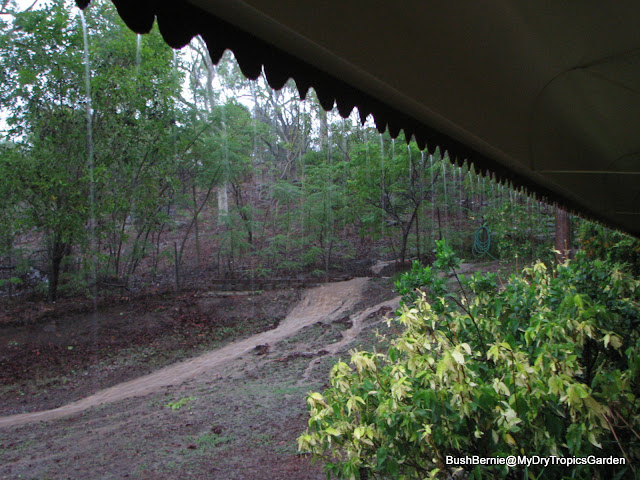 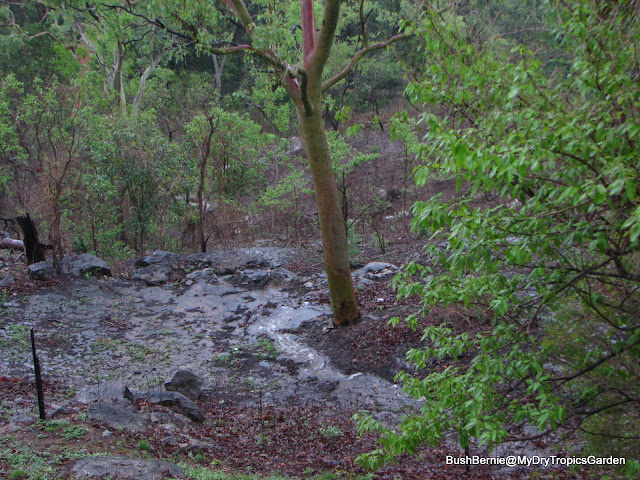 It bucketed down, and as a result, for one afternoon at least, there were little rivers and waterfalls in my front yard which then flowed on down into the bush paddock. 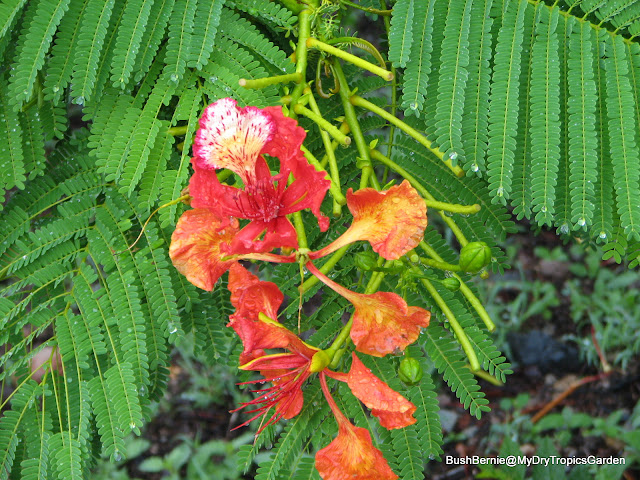 The trees and shrubs not only got a great shower, but finally got a decent drink. 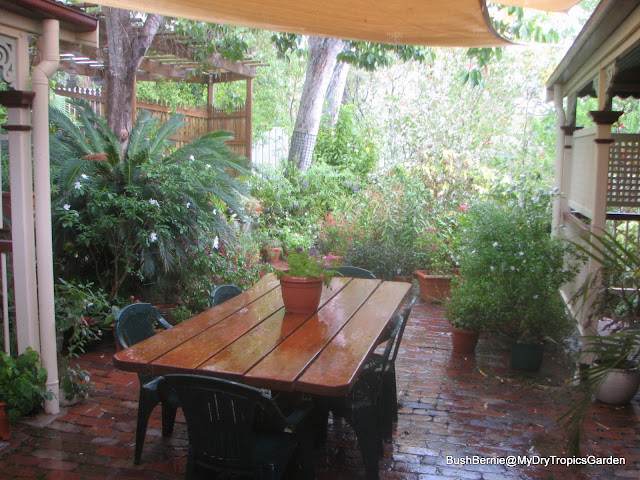 The many potted plants were completely drenched, as if they'd been sitting in the bath for hours. 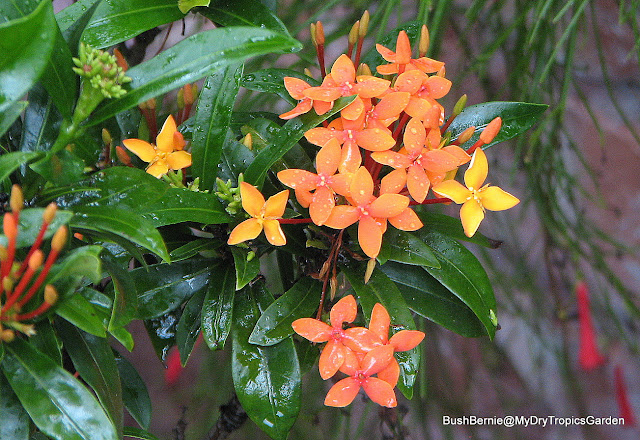 It was fantastic to see the flowers covered in raindrops for a couple of days. 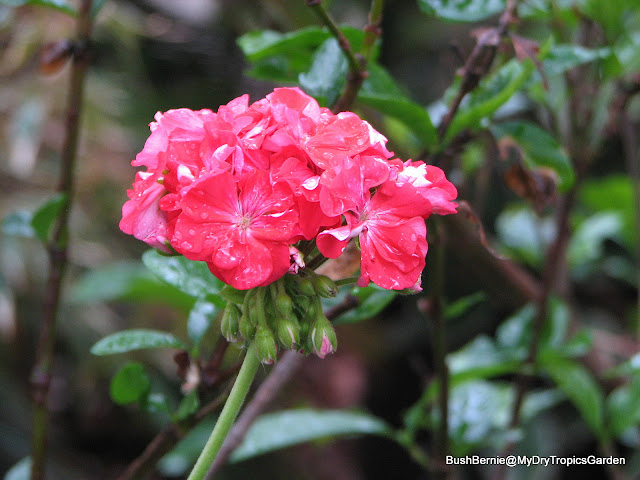 They seemed to somehow become brighter. 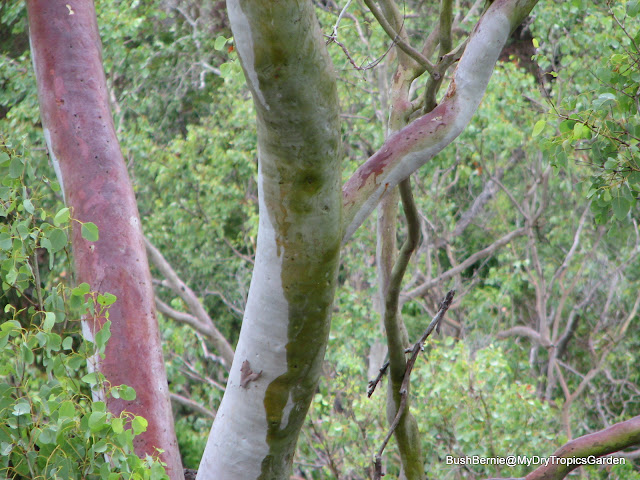 I also enjoyed seeing the tree trunks soaked and glistening in the sunshine when the sun finally broke through the cloud cover. 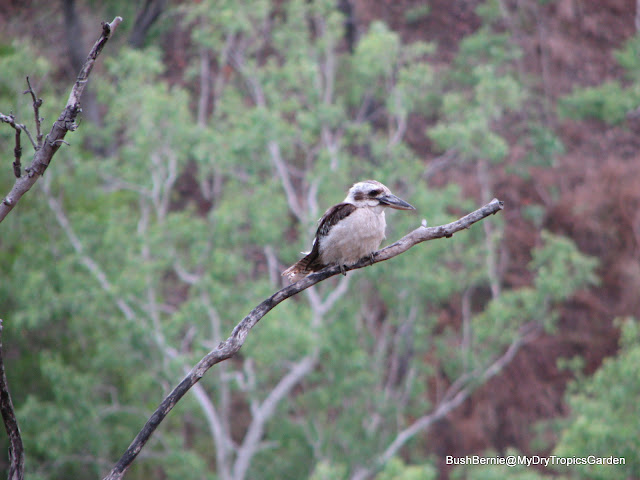 The creatures took shelter during the heavy downpours, and were not seen for a couple of days.  But with the return of the sunshine, there were a few trying to dry out.

We have a seasonal creek at the bottom of the cliff side our house sits on. It's dry for the majority of the year.  With the downpours last week however, we once again heard water running along the creek bed.

I just had to share this great video clip taken by a family who live just a little further away from us, closer to another of our local seasonal creeks.  It shows the exact moment that their seasonal creek started to flow with the arrival of some decent rain last week. 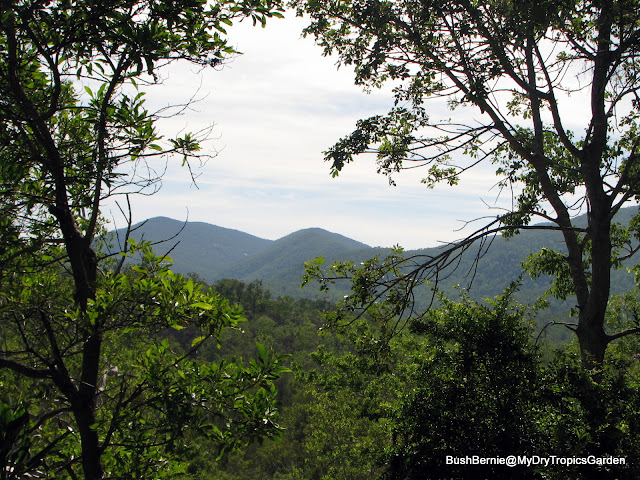 The skies are bright and blue once again, and have been all over the weekend.  Let's see how long it takes for the next episode of the wet season to begin.

In the meantime, there's not much gardening happening.  The daytime temps are excruciatingly hot at the moment (up around 36 - 37 deg C or 96 - 98 F), and the humidity levels are bordering on stressful if you dare to step outside and attempt any work at all.  So, the garden carries on without much help from me as our mid-summer month comes to an end. 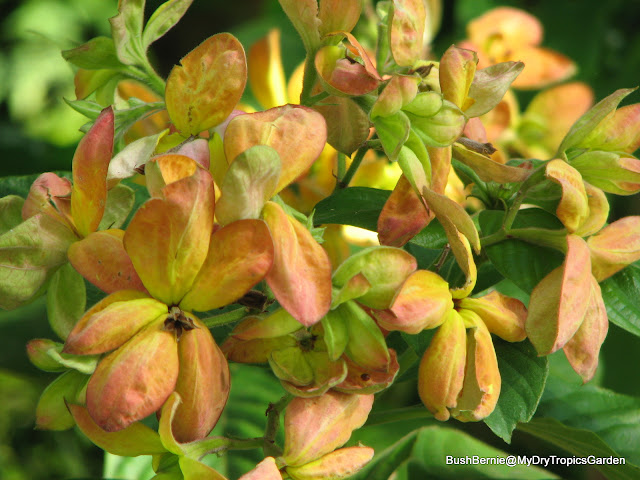 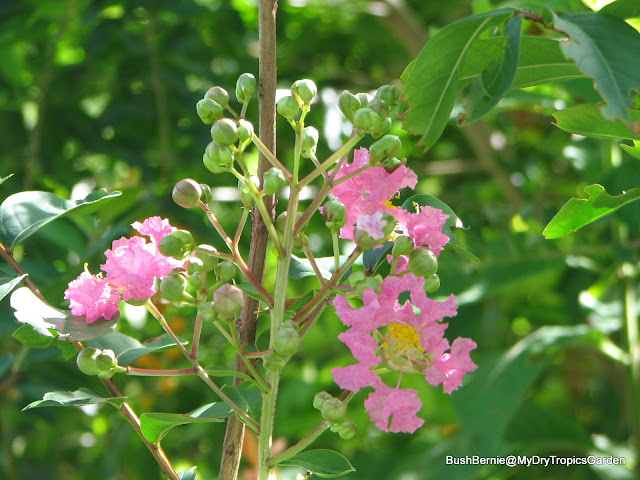 More flower sprays are appearing on the Lagerstroemia indica. 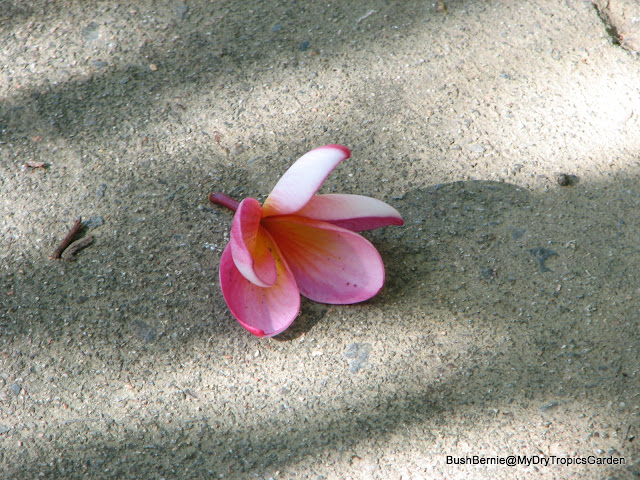 The Plumerias are still dropping their flowers. 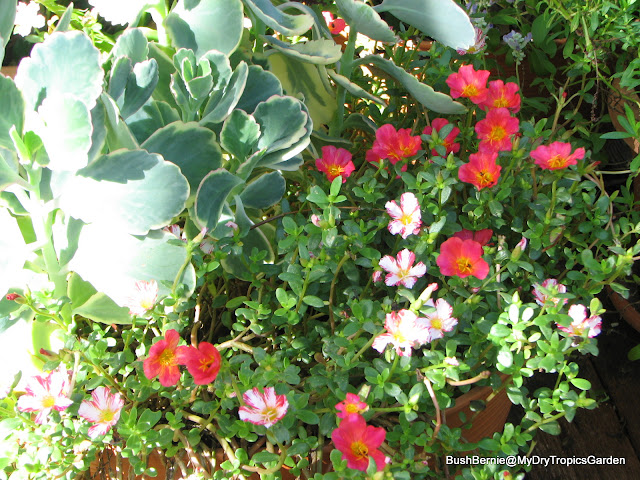 There's still a bit of potted colour out in the courtyard garden. 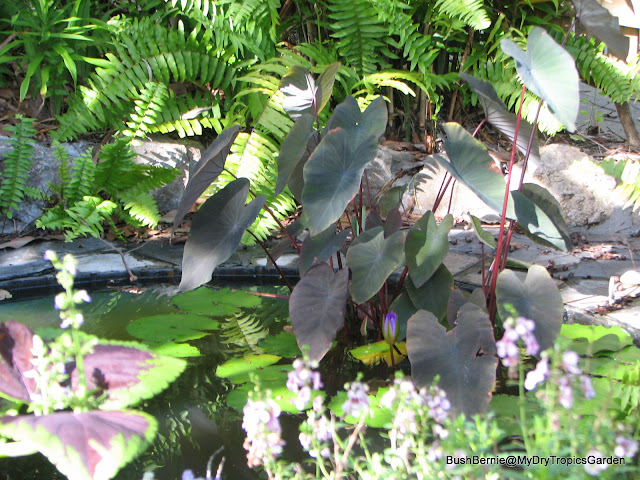 Water Lilies are still showing off in the pond. 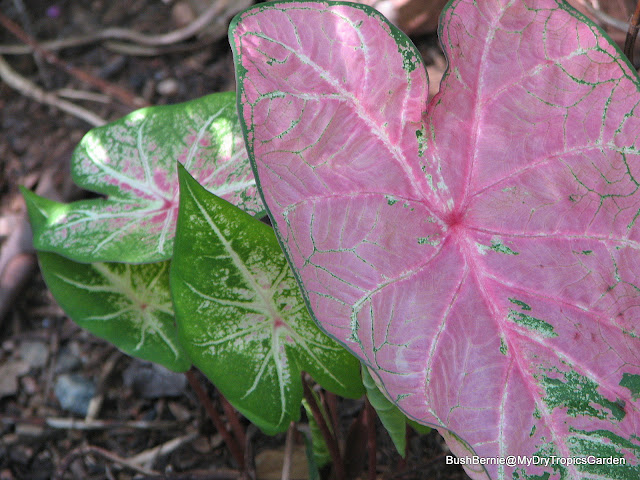 There are Caladiums rising from their slumber next to the pond. 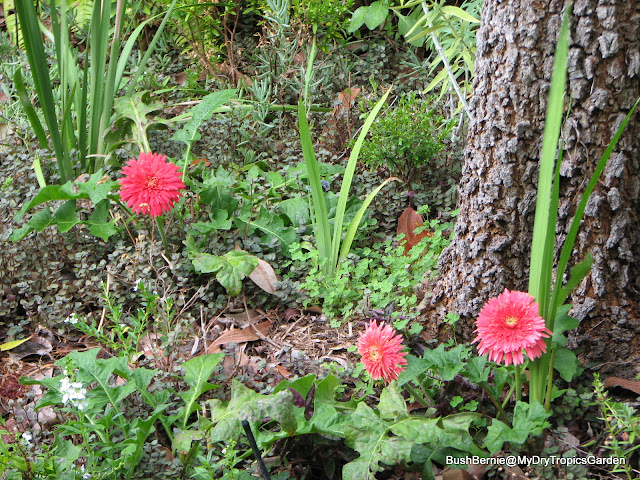 Of course, the hardy trusty Gerberas continue to show their cheers faces, 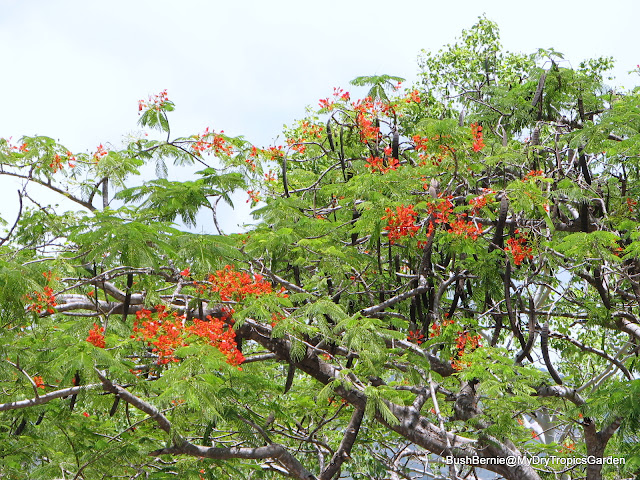 and the Delonix regias are still showing their summertime colour.