Season:  end of Summer, 'wet' season (huh, I laugh with much disdain!), and 'cyclone' season 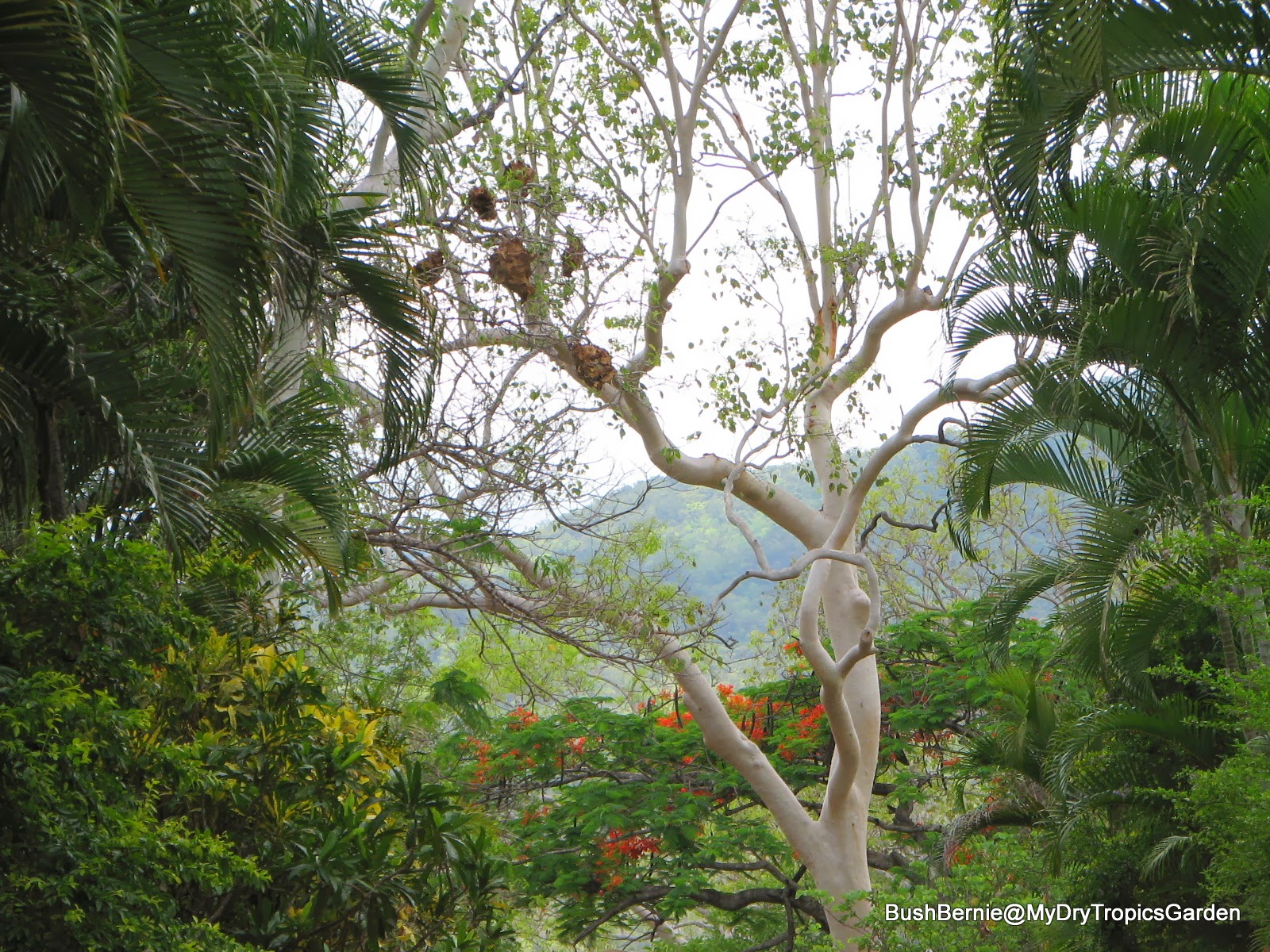 Things do tend to grind to a halt around here during late Spring (November) and into the Summer (December, January, February).  The conditions get pretty darn hot and humid, and getting outside is not all that enjoyable for most of the day.  Of course, during December and into January, I'm on holiday as our longest school break occurs during our beginning and middle Summer months.  I spend a lot of that time visiting with my eldest son and grandchildren down south, and then I have to get back and spend a couple of weeks preparing for the new school year.  That also contributes to the restricted amount of time spent out in the garden.

Back in October, I was reporting on the arrival of some light showers of rain, which doesn't happen all that often in our mid-Spring month.  We did get a little rainfall during November, the heaviest showers occurred at the beginning of the month, but then December and January turned out to be a lot drier than usual. 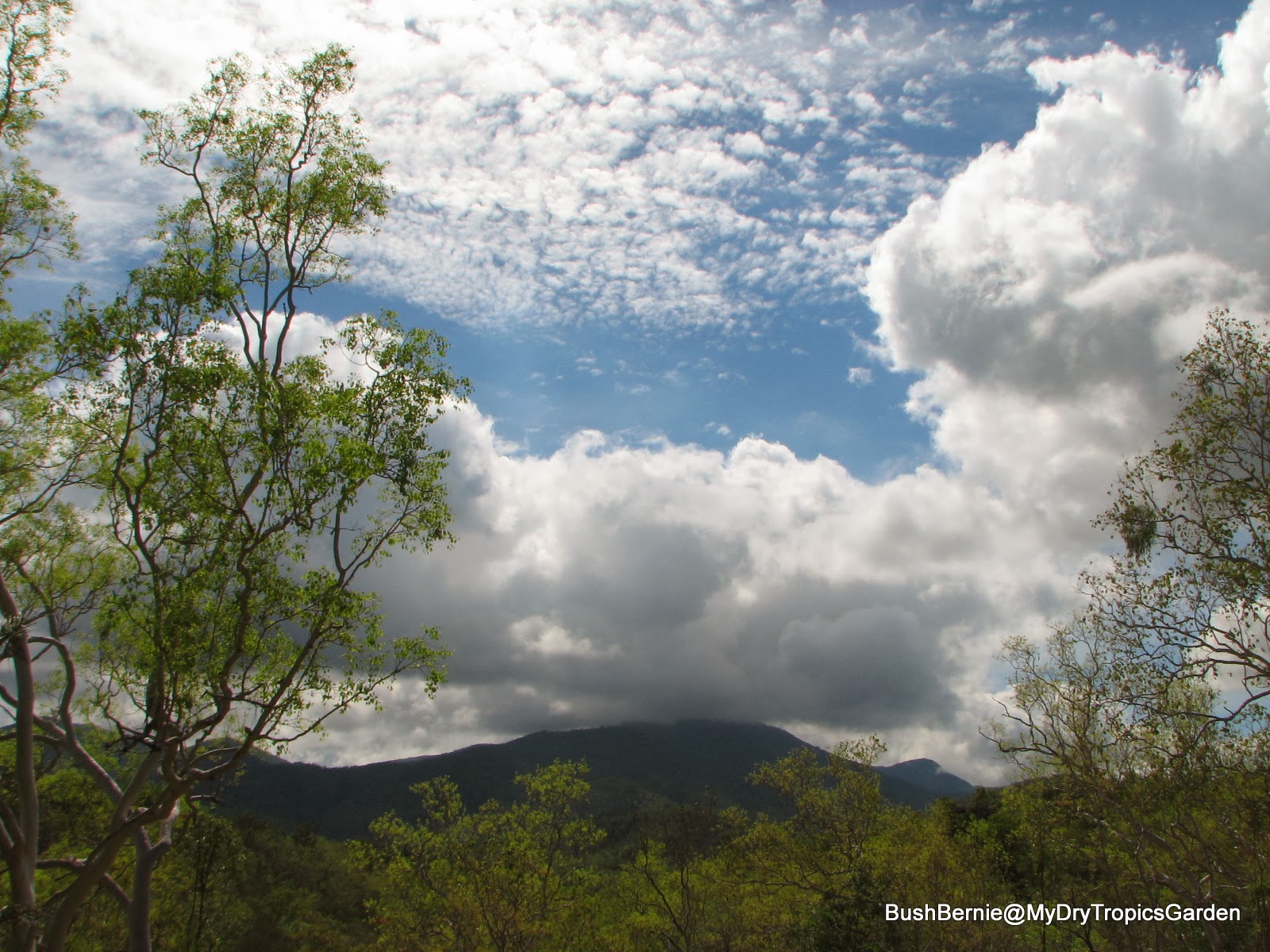 Our 'wet' season is supposed to begin in December and we spend a lot of time looking for the signs of coming rain.  We usually get some really heavy falls towards the end of January into February.  Well that hasn't happened this year.  It's been quite a dry wet season so far, and we're still waiting for those heavy torrential downpours.

Okay, so weather aside, let's get onto what has happening around here since last October. 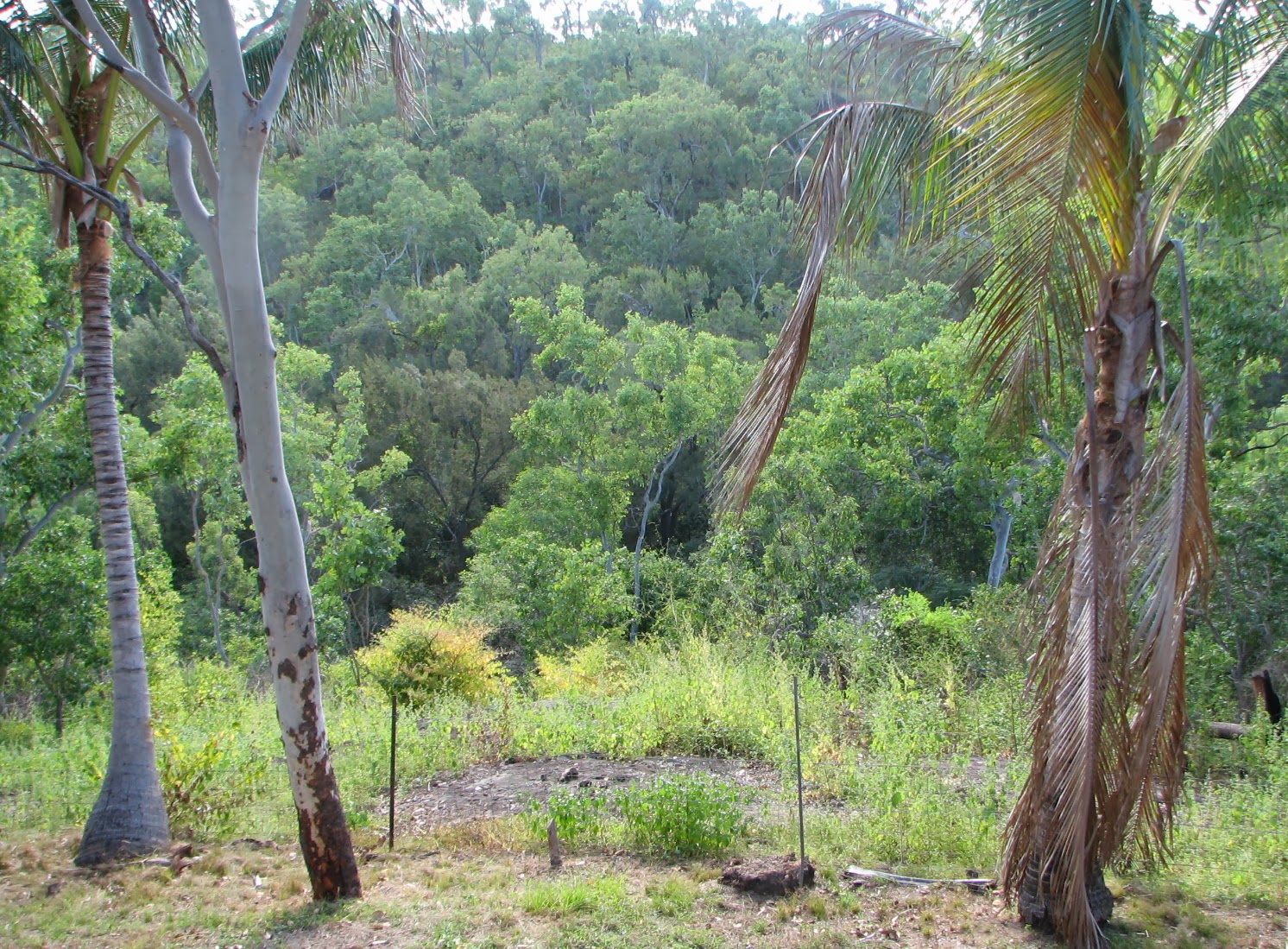 My darling husband decided it was definitely time to get rid of a couple of Coconut Palms that had been growing along a fence line next to the bush paddock.  Four had been planted there many years ago, before we arrived, and they just looked totally out of place with the native bushland behind them.  Over the years one of them simply died off of its own accord.  One was knocked flat during Cyclone Yasi, and the last two just started to get on our nerves with their constant messy look. 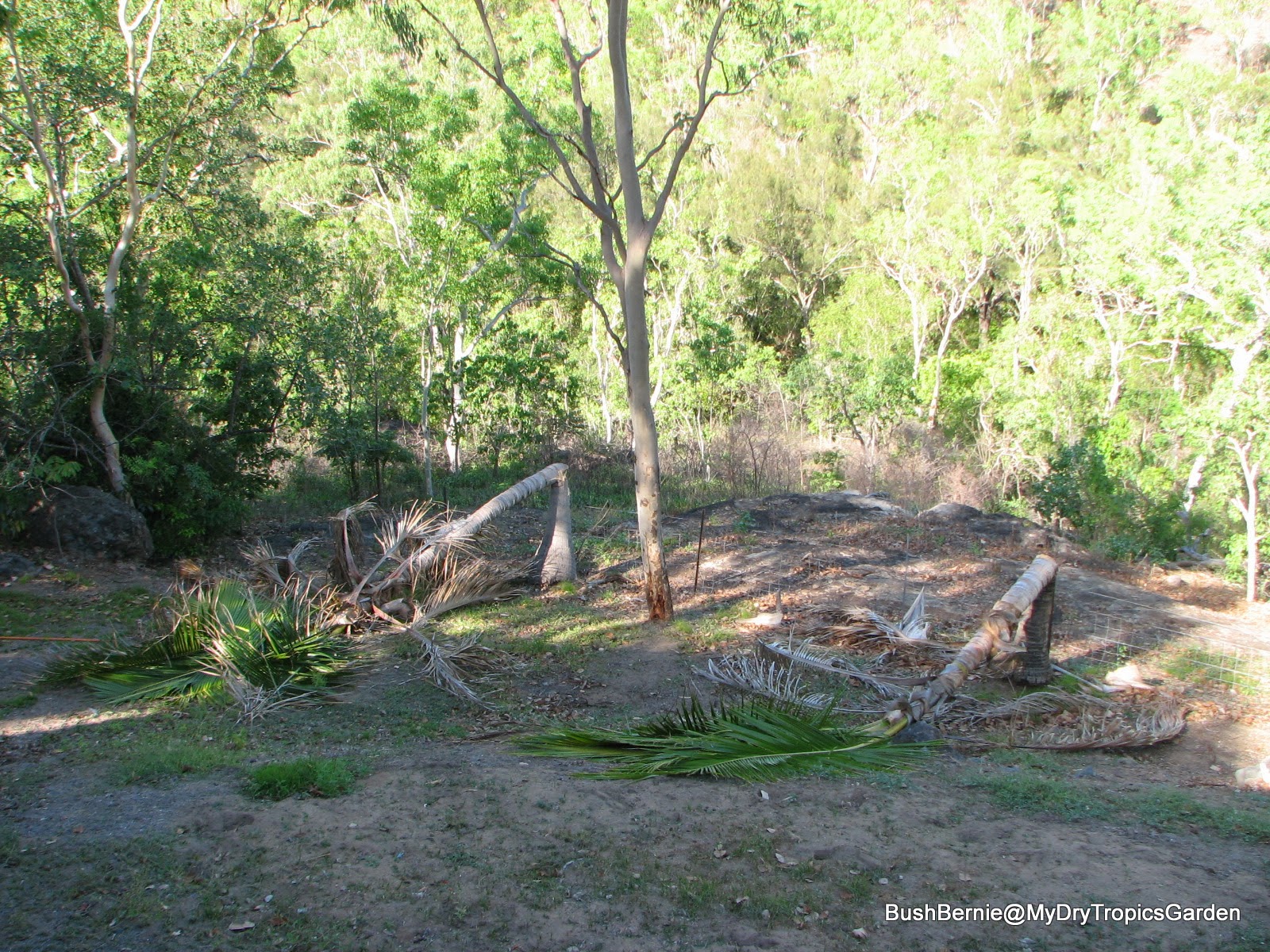 Well my darling tackled this job on his own, giving me cause to worry for the whole two days it took to complete the job.  He cut both of the massive Palms down, cut them into sections and then dragged them off to a section in the bushland over the fence where they could remain hidden behind a rock shelf while they disintegrate over time.  You can just see the top of the rock shelf behind the two fallen Palms in the photo above.  I tried my best not to watch this whole process.  Remember, our property sits on a steep sloping piece of land and I had visions huge Palms rolling down the hillside, or my husband getting crushed by massive big pieces of crashing Palm trunk. 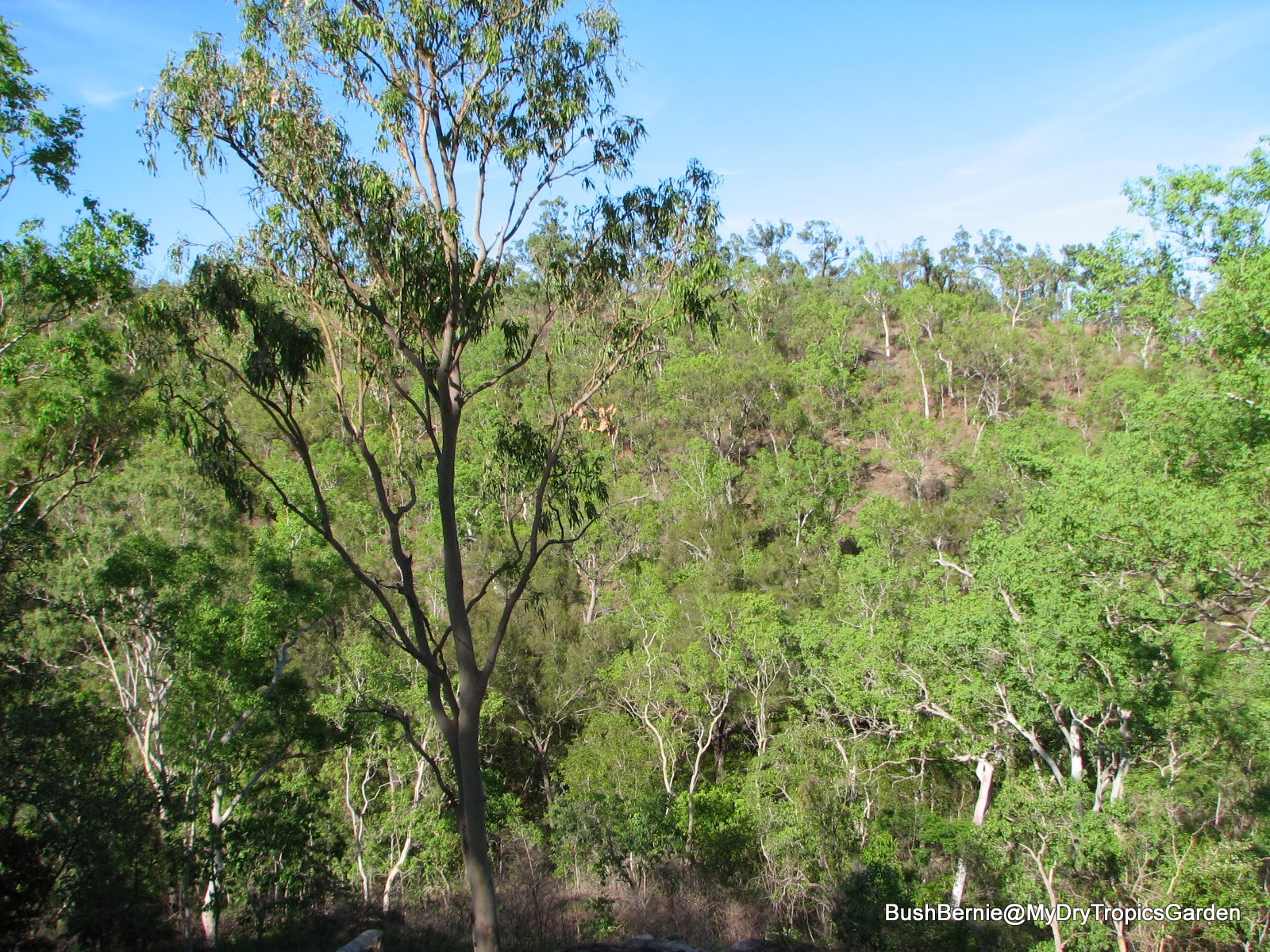 Anyway, the job was completed fairly safely (I won't go into that!), and I have to admit that the view is a whole lot better now without the ugly tops of Coconut Palms getting in the way.

The construction of my new garden beds was finished back in November last year.   Thanks have to go to my darling hubby again.  He did a fantastic job building these beds on a quite challenging section of our property.  It wasn't an easy job constructing garden bed walls on a sloping site, and I think he's proven just what a fantastic problem solver he is!!! 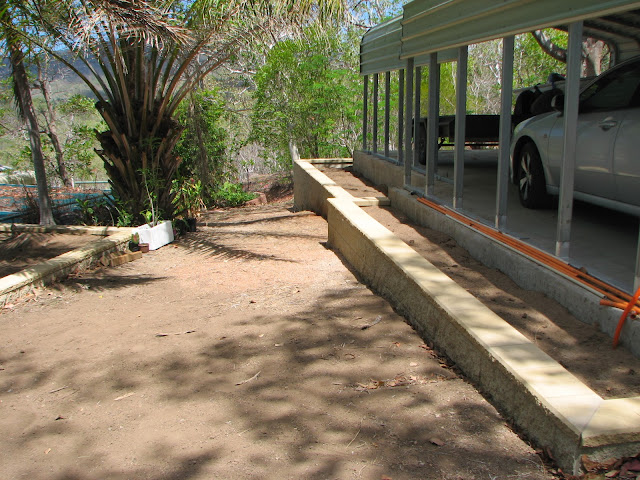 In the new beds that were built around the newly-extended car shed, I spent some time creating a 'lasagne' garden.  Well, when I say 'I', I really mean my DH.  I did have the idea, but he did most of the heavy work.  It's how things seem to work around here! 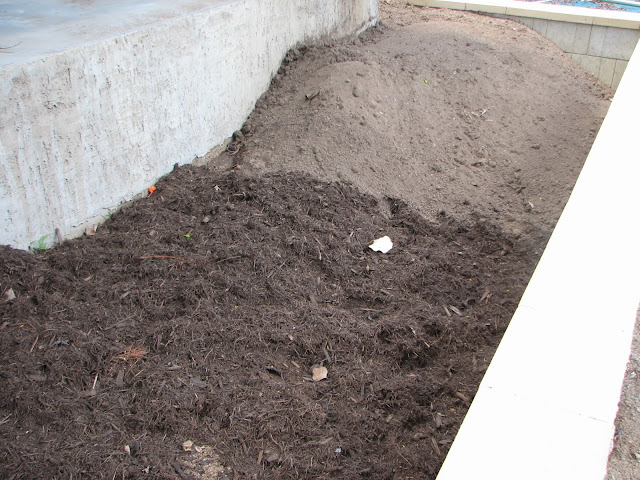 Anyway, he spread gypsum all over the bottom of the beds first, to help break up the clay soil.  Then my hubby spread a huge load of horse manure that he had managed to get delivered from a neighbour ... for free. 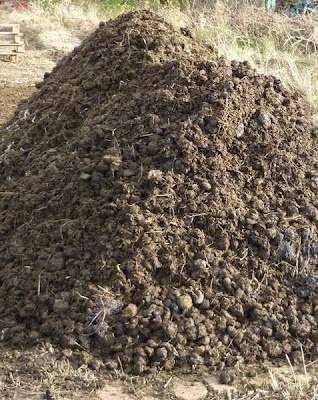 Horse manure?  I hear you ask.  Yes, I know horse manure has had a bad wrap over the years, with claims about seeds sprouting everywhere.  But if you are not intending on applying it directly to the soil around growing plants, and you want a great soil conditioner/soil improver, then horse manure is the answer.


The values of horse manure:
- easily available in my neck of the woods as there are quite a few neighbours around here who have horses   on their property

- holds a lot of water, which is important in a dry zone like mine

- while it does contain nutrients, it also contains plenty of fibre which makes it an excellent soil conditioner
This was a very important aspect for me when considering which manure to use in the spot where the new beds have been built

- it's a complete fertilizer supplying nitrogen, potassium and phosphorus, although the concentrations are low compared to other manures

- it releases its nutrients slowly over time, which is a great feature

- it doesn't burn plants, even if you do not let it compost for six months

- it's lighter to haul around

- it doesn't smell as much as other manures. 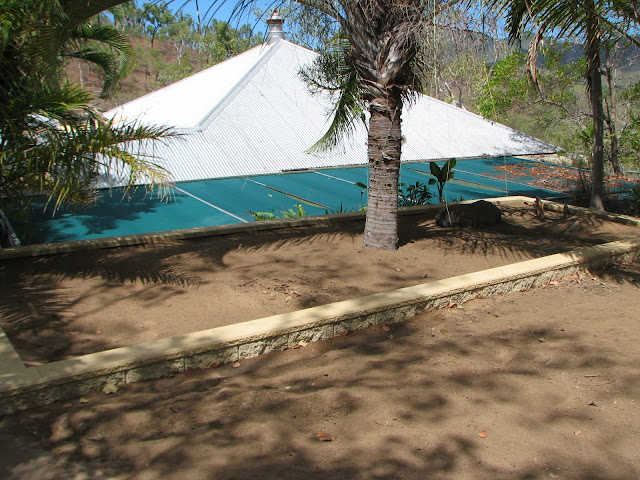 After laying gypsum and horse manure in all the new beds, my husband spread out hay mulch and garden mulch, before finally finishing the job by spending a back-breaking day spreading out over 20 cubic metres of garden loam, which again he managed to get delivered ... for free!  It pays to get to know your neighbours well. 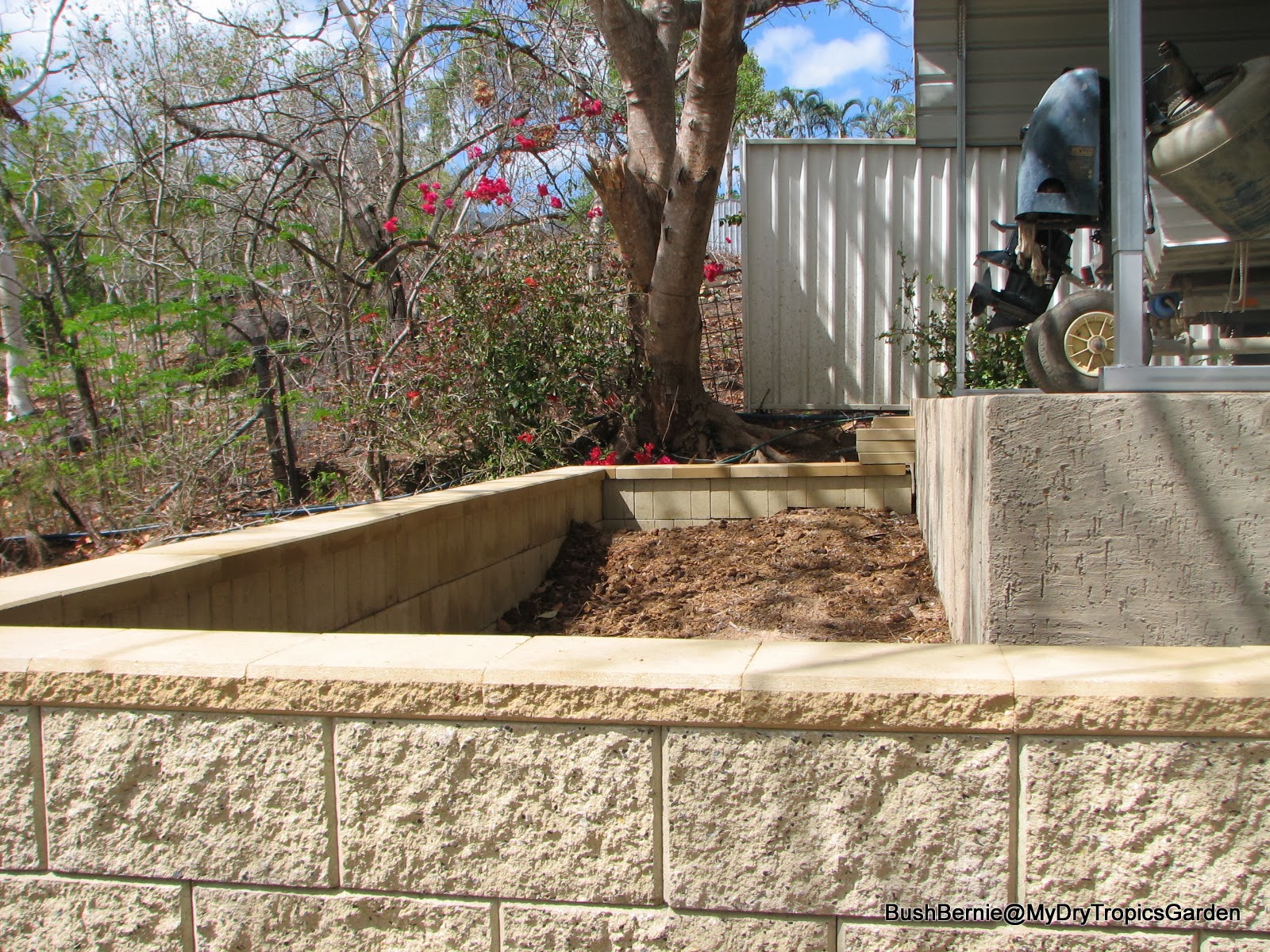 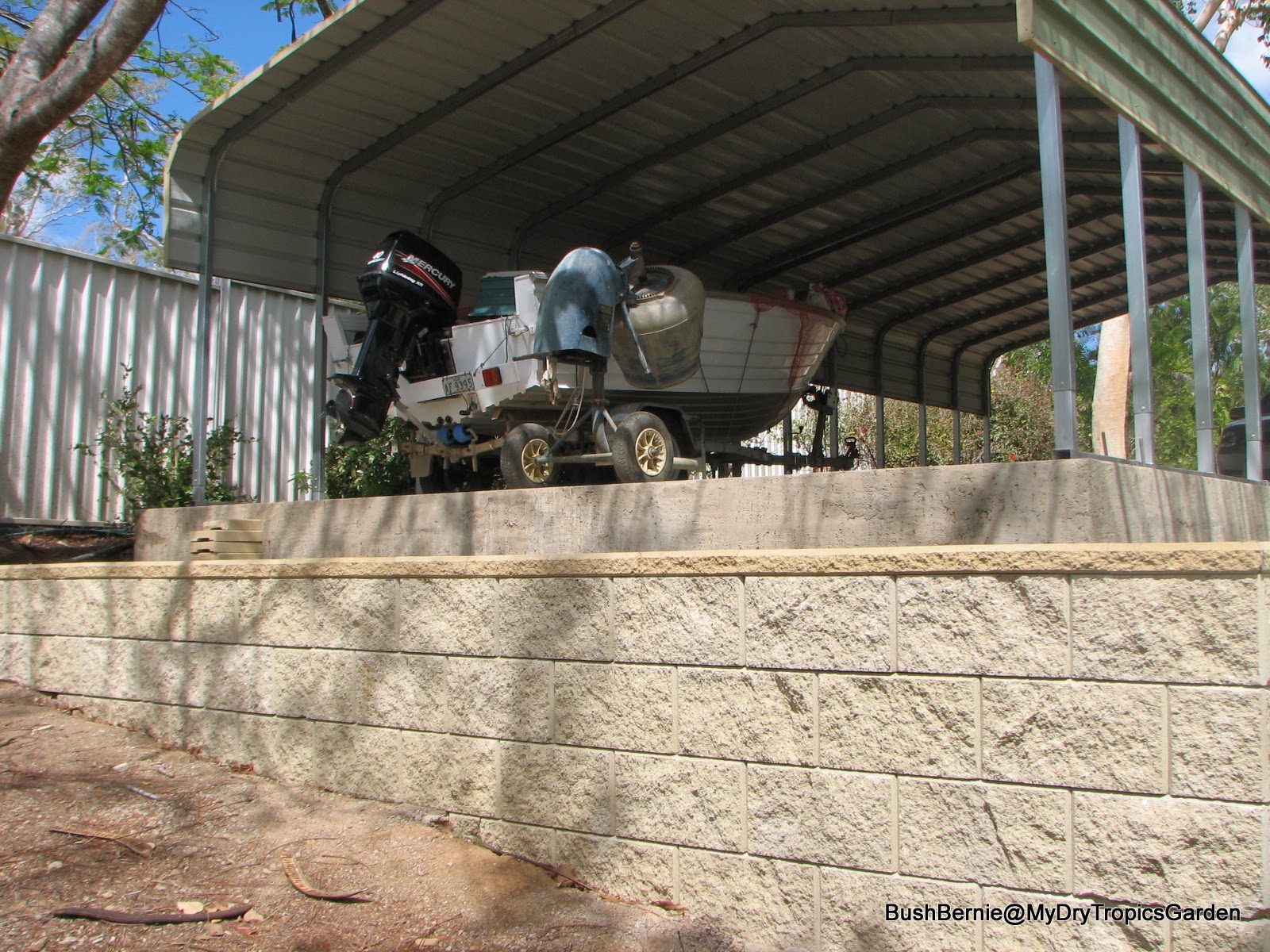 We needed that much garden loam because the sections of the new beds at the end of the car shed extension are very, very deep. 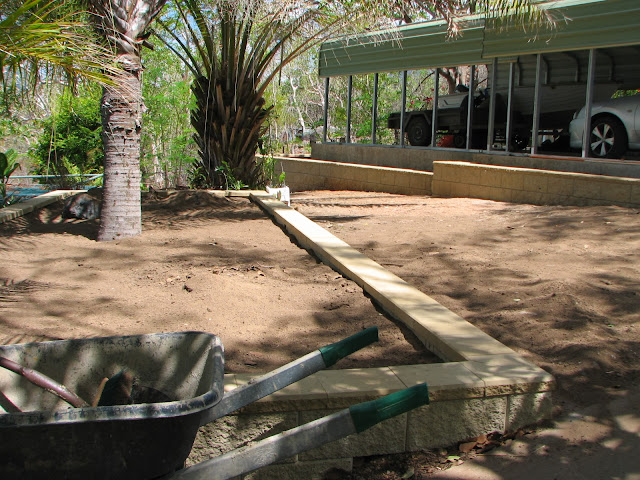 I then added in some blood and bone to all the beds and started the process of planting. 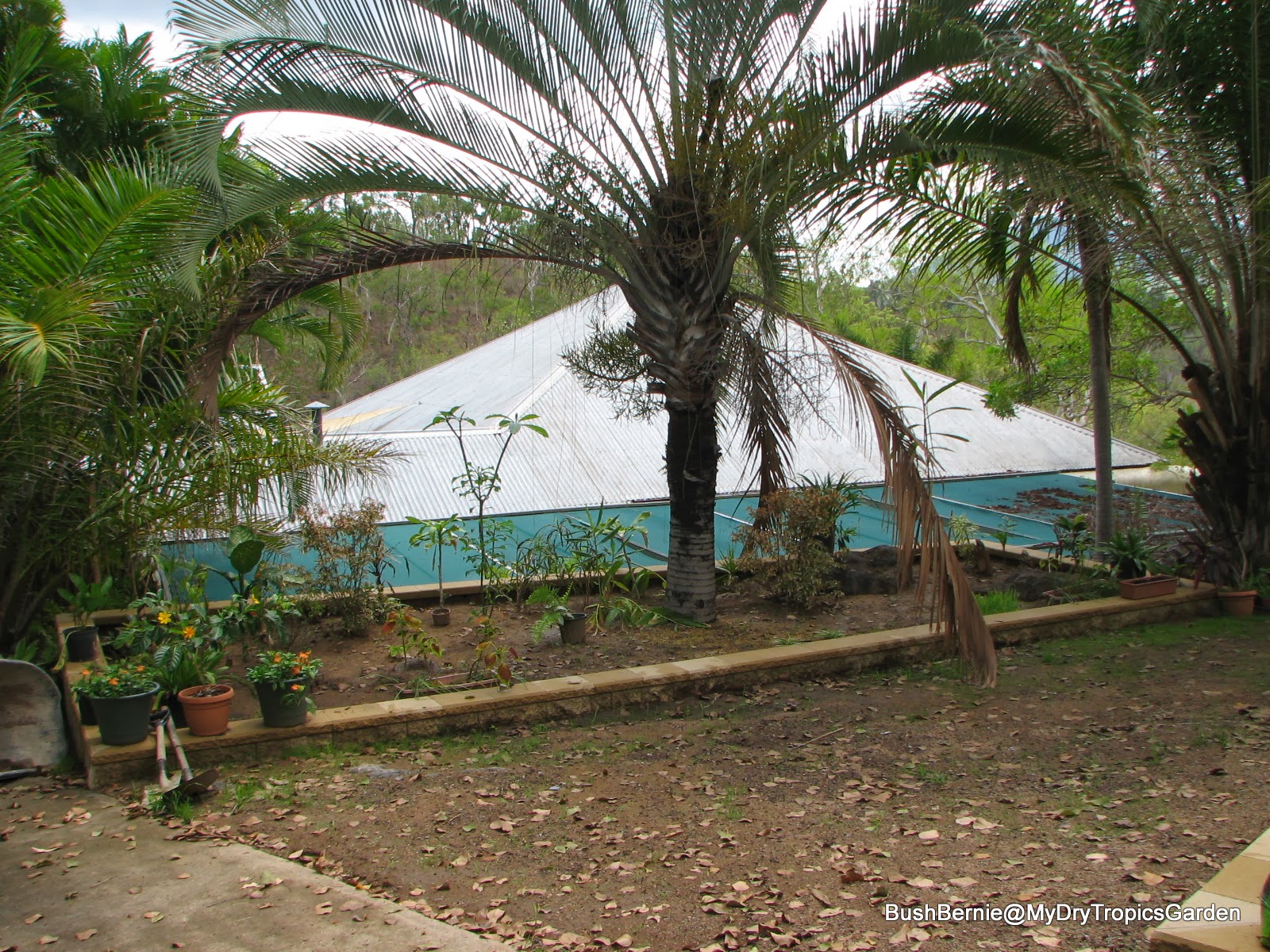 There was a little bit of planting completed in late November / early December, but by then the beginning of our summertime had begun, and that is most certainly not the ideal time for planting here in the northern tropics.  The heat, the fierceness of the sunshine and the high humidity levels means young plants have an excruciating time settling in to new spots in my garden. 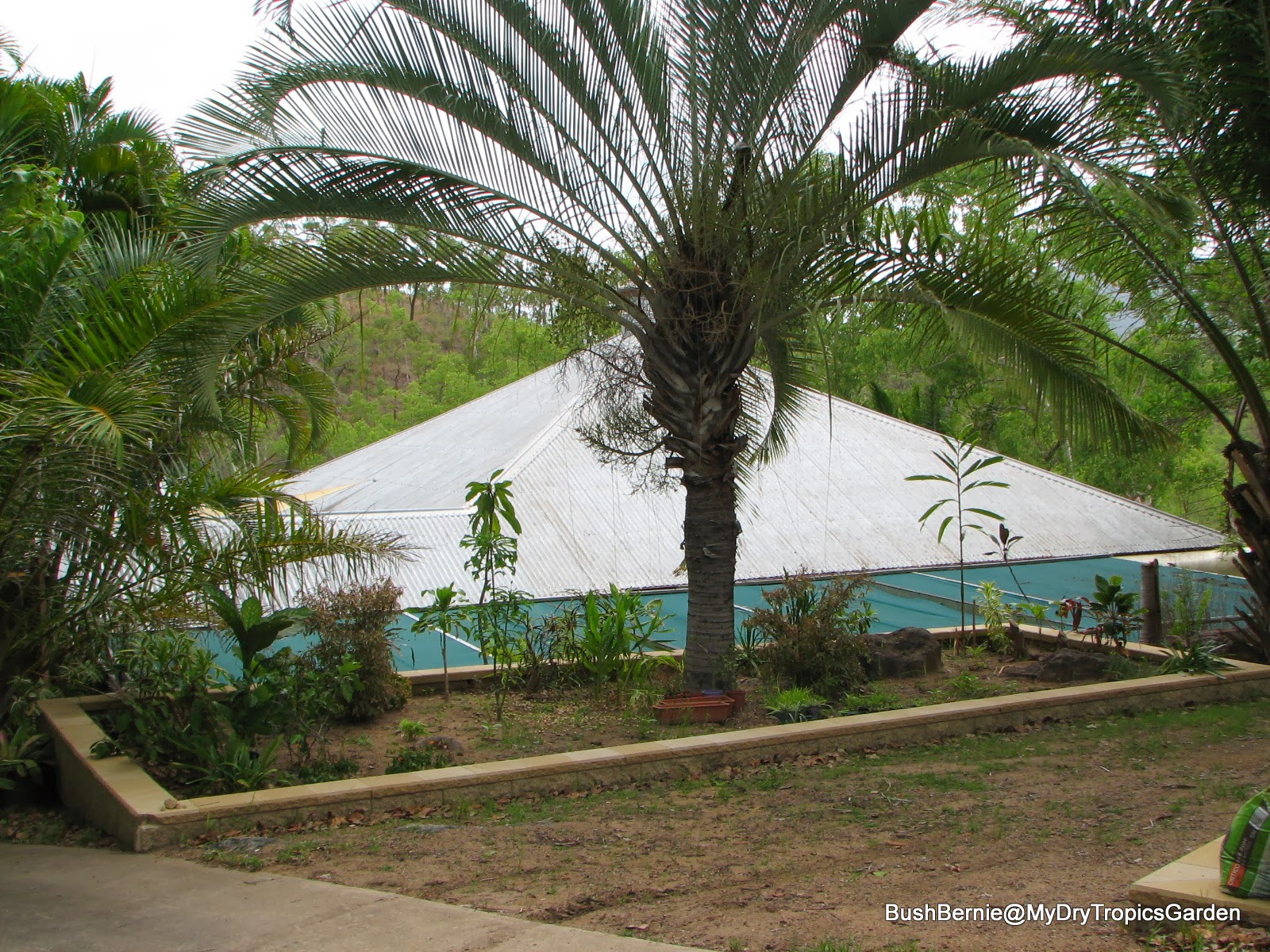 Thankfully the few that I had planted did very well through our first summer month of December, and by January had settled in beautifully, although there hadn't been all that much growth.  They just needed some rain to really take off.

So far we've had only 130 mm of rain for 2014 (5 inches), which is considerably less that the usual for this time of the year.  It seems as if the 'wet' season is going to be more of a 'slightly damp' season. 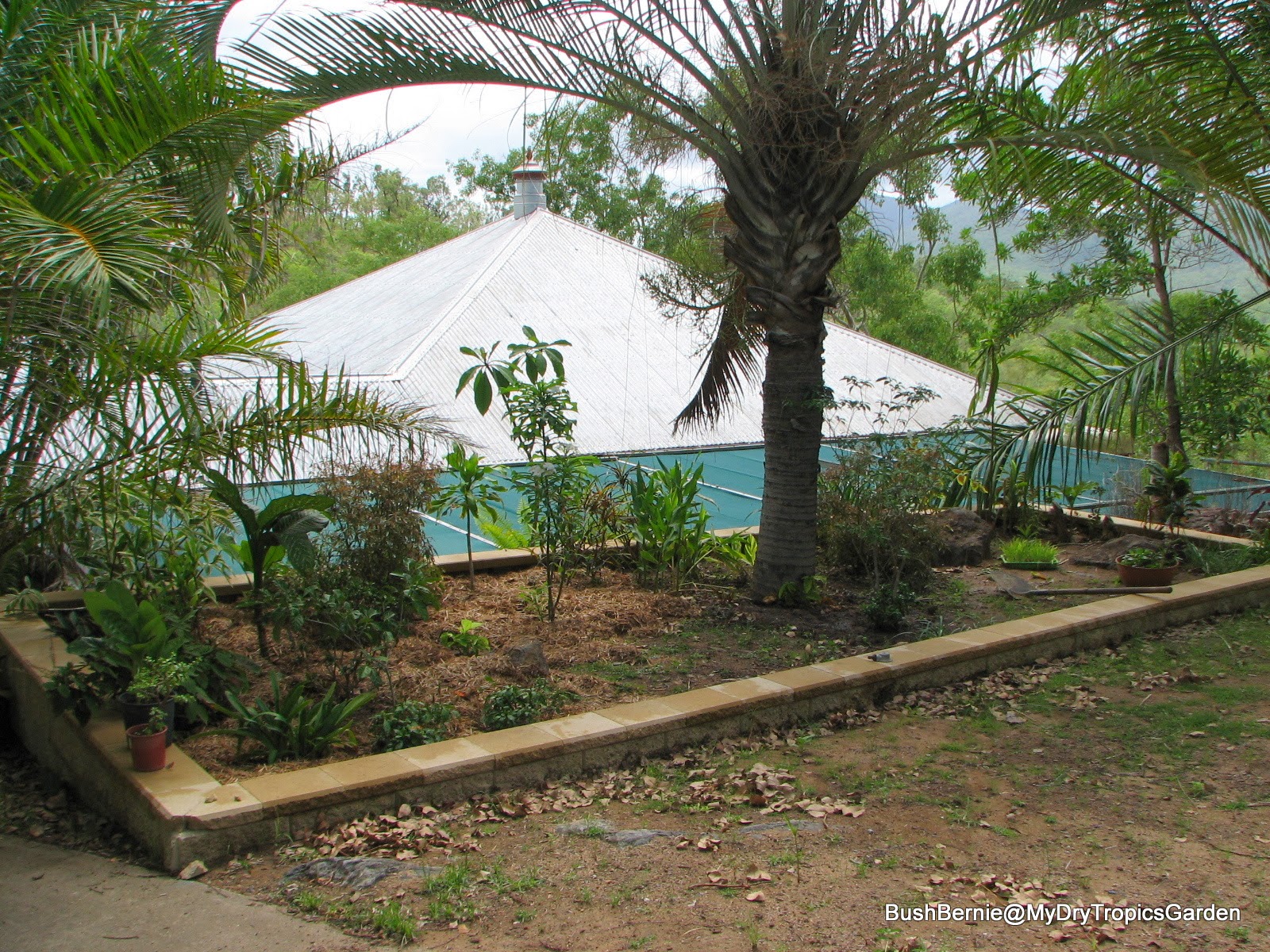 Anyway, I've taken advantage of the showers of rain that we have had, and planted a few more things in the new beds.  I'm also top mulching the beds in sections, as I can afford to buy more of that lovely sugar cane mulch.  Slowly, slowly it will all take shape. 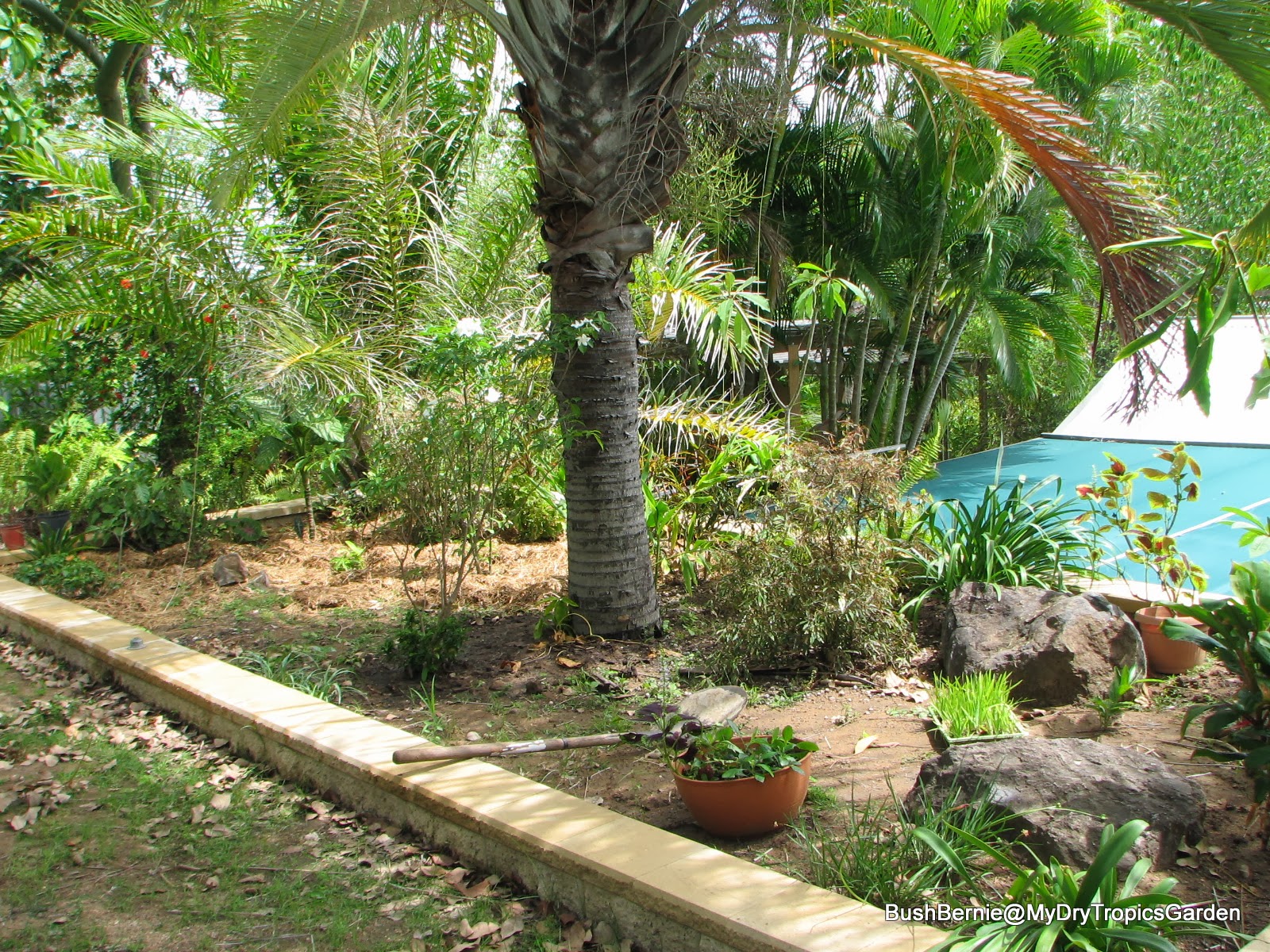 So far, to the new 'Under the Triangular Palm' garden bed, I've added various Costus plants, a few Crossandras, my one and only Plumeria pudica, a Tabernaemontana corymbosa and a dwarf white Ixora, a few Dracaenas and Diffenbachias, a couple of Crotons, Cordylines and Acalyphas, some Hippeastrum and Hymenocallis, some Coleus and a few Zyphyranthes and Habranthus.  I've still got some Iris domestica and more Crossandras and Zyphyranthes to add yet. 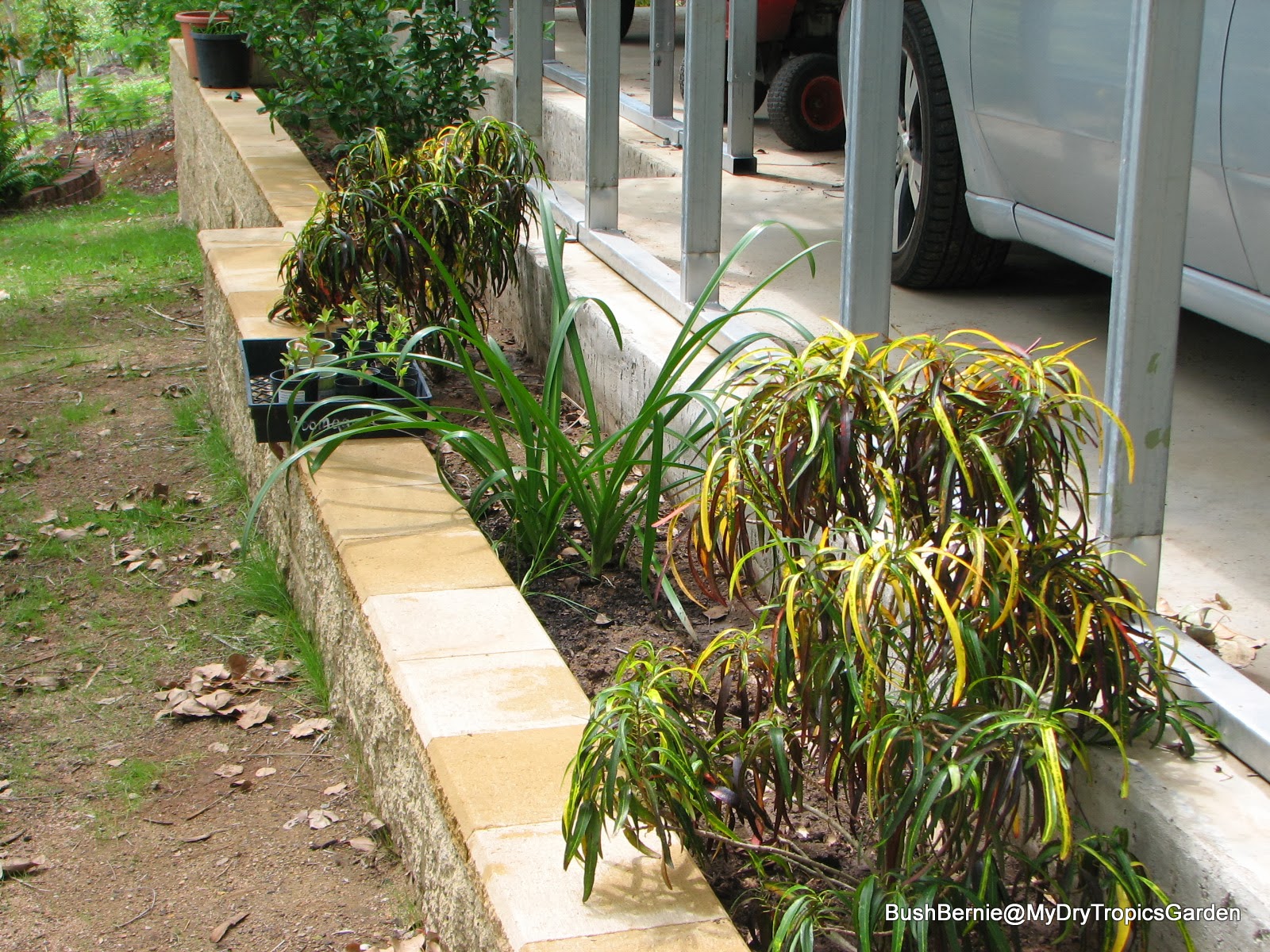 I've planted a couple of Croton Zanzibars, a clump of Hymenocallis and some Zephyranthes in the first narrow 'Beside the Car Shed' garden bed. 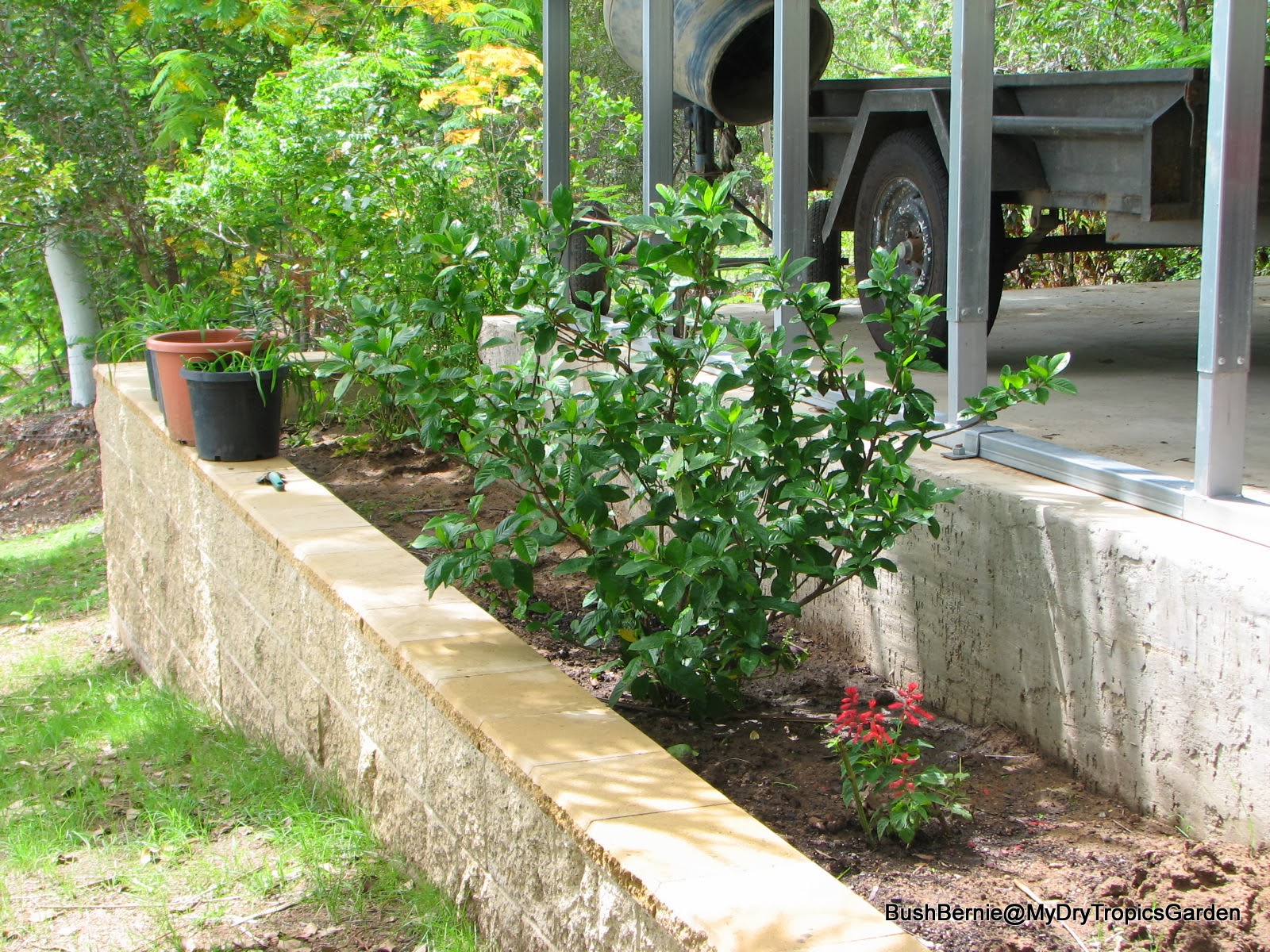 There's a Gardenia and a couple of Salvia splendens plants that have gone in the second narrow 'Beside The Car Shed' bed. 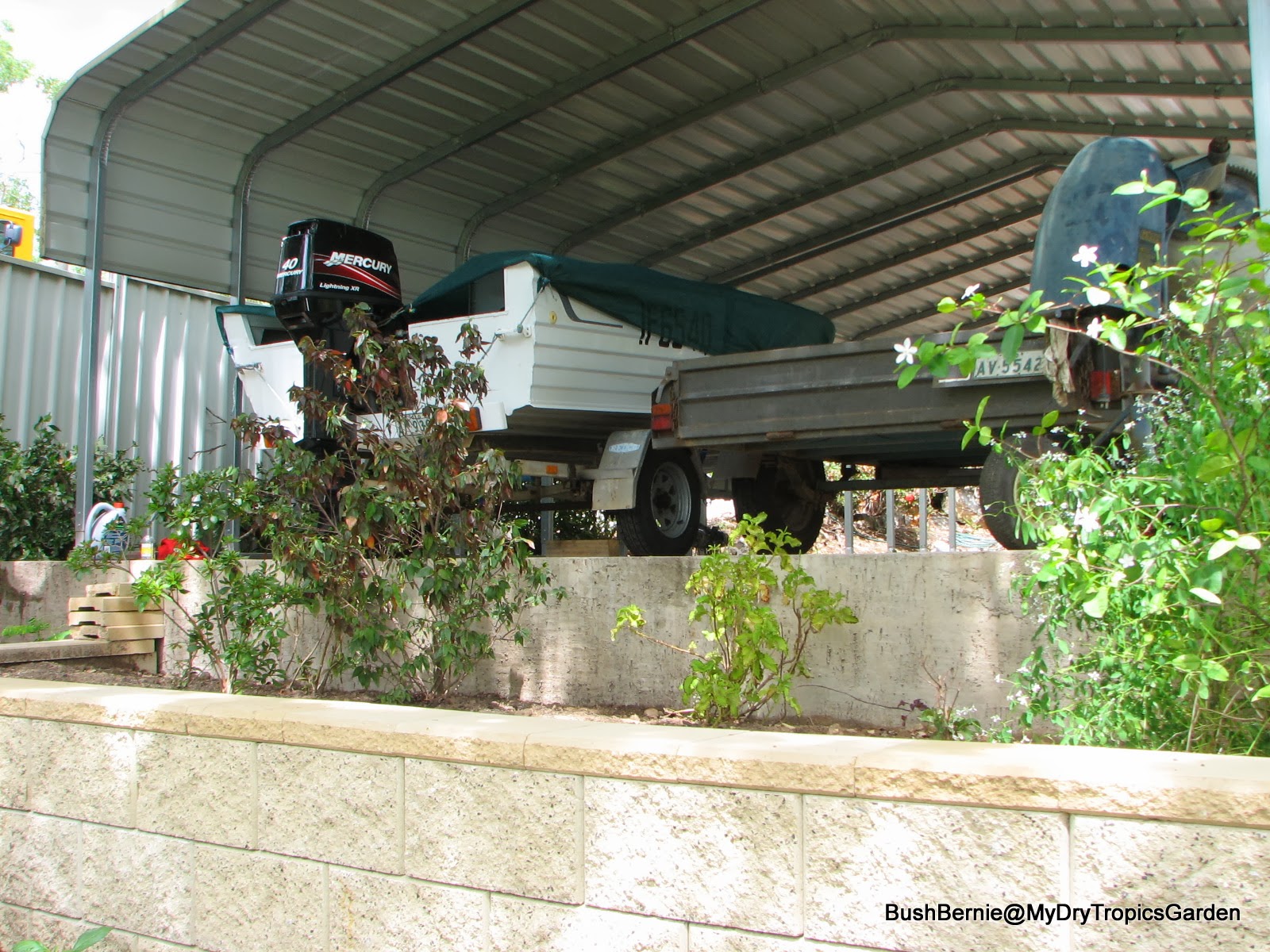 The 'End of the Car Shed' bed has only a Wrightia with some Euphorbia 'Diamond Frost', a dwarf pink Azalea indica, some Coleus and an Acalypha 'Inferno'.  I'm now waiting for all these to settle in before adding anything else. 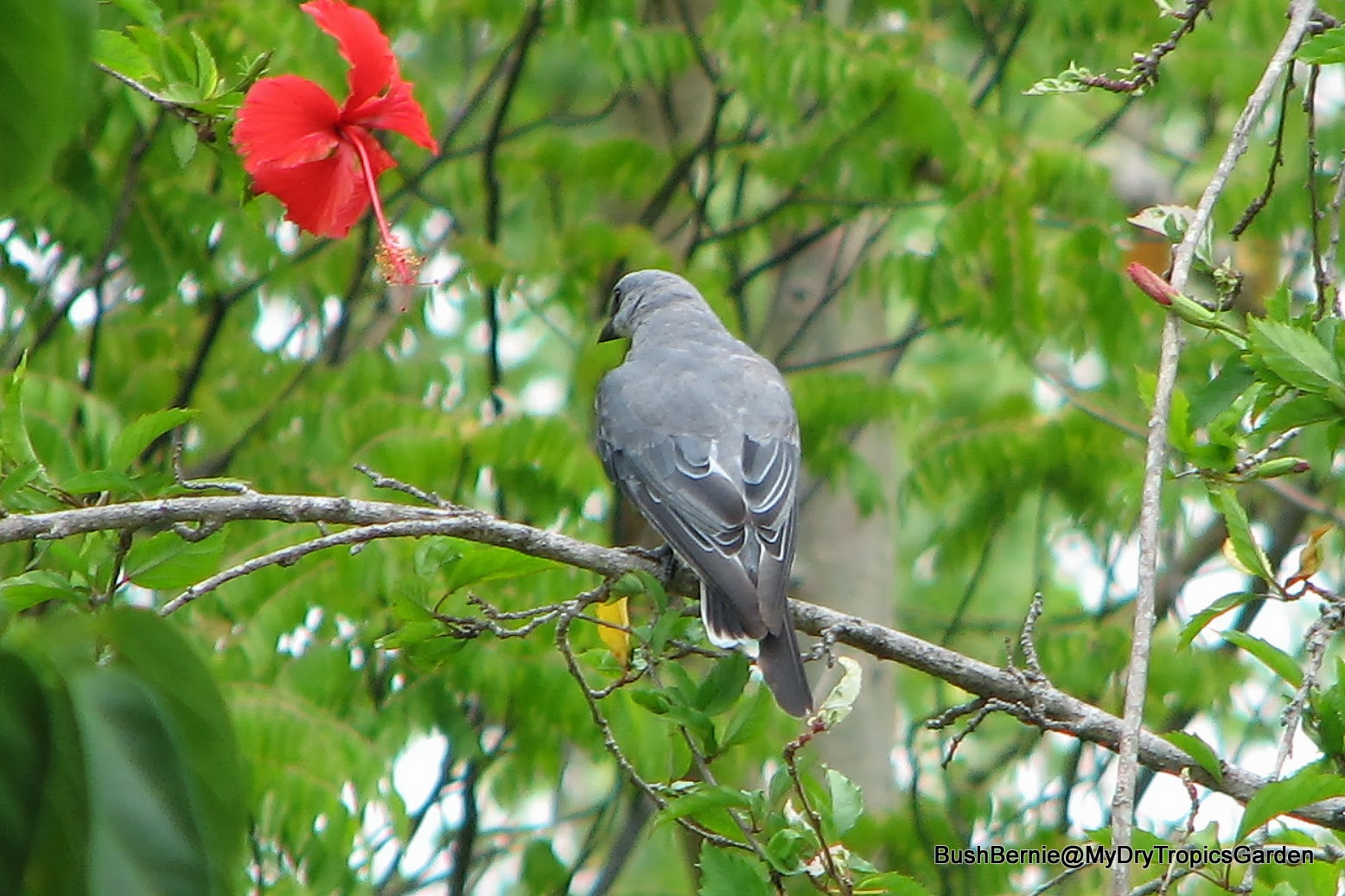 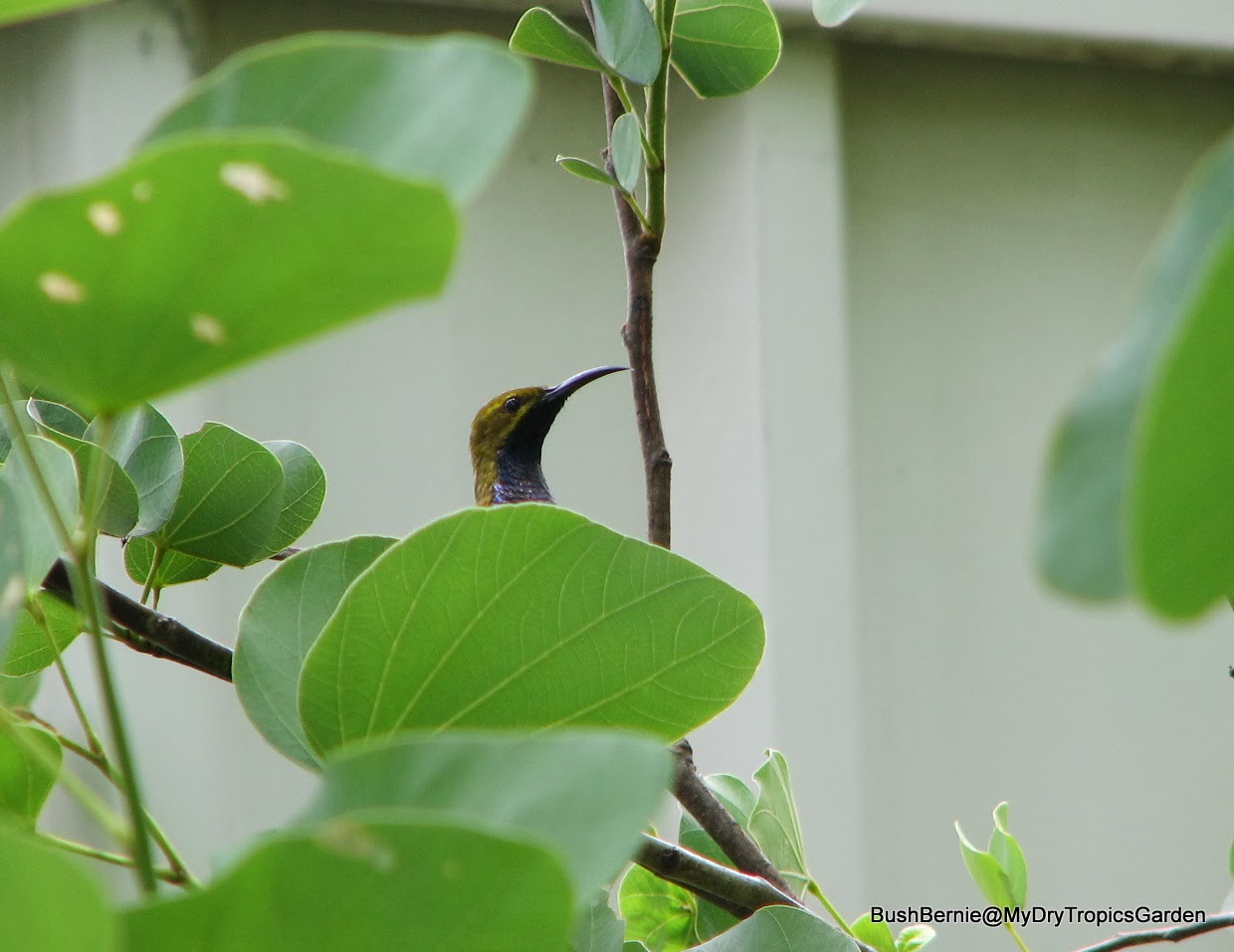 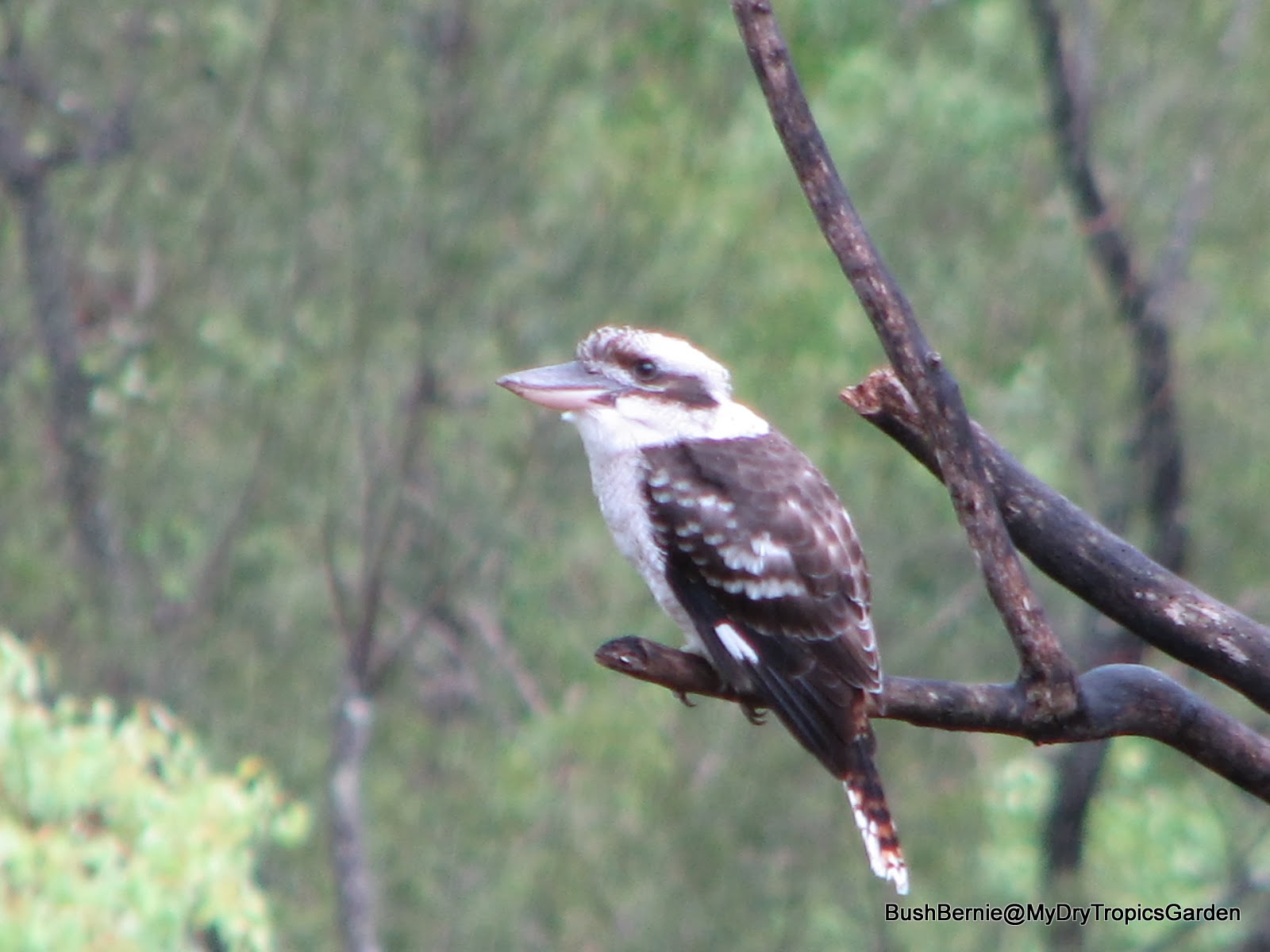 We're all on the lookout for rain now, and hopefully we will get some truly decent torrential monsoonal rain soon.