The definition of ‘bush tucker’ would be: any edible, native Australian flora and fauna that was present before European colonisation which was harvested or hunted in the bush by our country's original inhabitants ... the Aborigines.

I have a 'Bush Tucker' tree in my courtyard that is native to the eastern coastal strip from northern New South Wales to far north Queensland ... and up into Papua New Guinea.  Not only were the seeds used as food by the Aboriginal people, the bark was used to weave baskets. The inner bark of this tree was also important to them as a source of string, which was used for rope, fishing nets and fishing line.

This tree is commonly called the 'Peanut Tree' - Sterculia quadrifida.  Not only is the 'Bush Tucker' aspect of this tree interesting, it is also one of our very rare native Winter-deciduous trees.

It grows to a height of 5 -10 metres and has a spreading canopy, dropping it's leaves during Winter and when flowering.  The leaves are dark green and broad egg-shaped or sometimes heart-shaped at the base.  Around my area of north Queensland the Peanut Tree can start to shed leaves in May ... which is the end of Autumn. Leaves will then begin to regrow after the tree has fruited ...  this is usually around August to September, which is the end of Winter into early Spring.

Here it is in my courtyard garden ... first, when covered in leaves ... and next, when it's beginning to drop it's leaves: 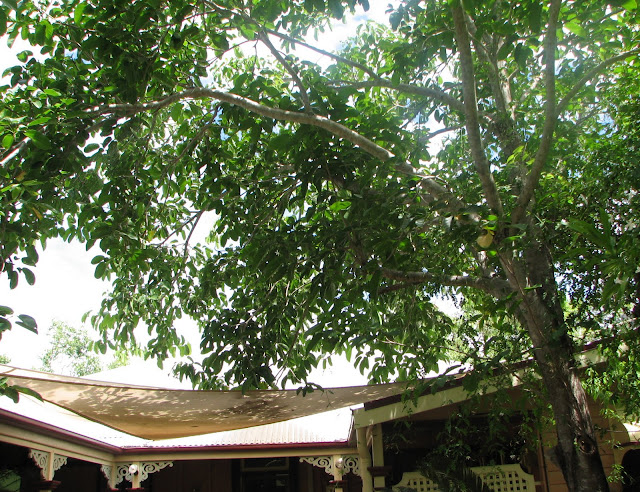 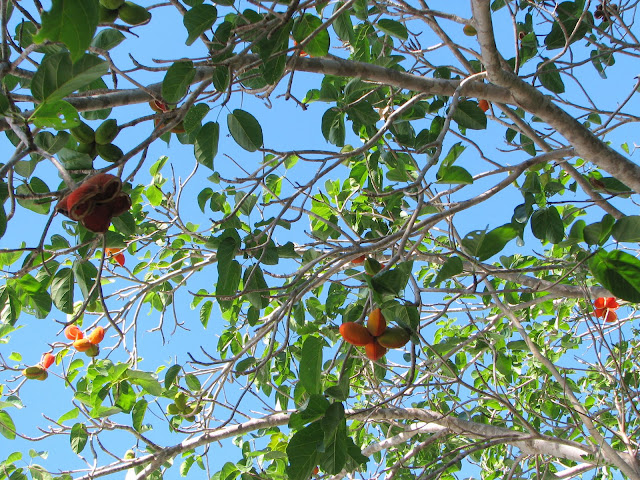 The creamy-white, lemon-scented flowers of this tree are rather inconspicuous. They are borne in small clusters in the upper axils, and occur from November to January (Summer in Australia). 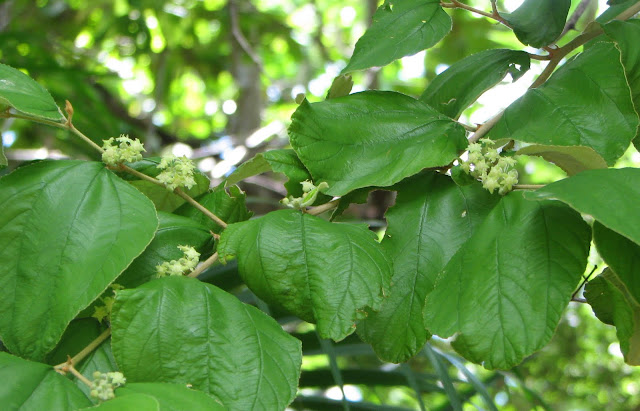 The most distinctive feature of this native tree is the fruit.

The fruits are clusters of large, leathery, boat-shaped pods up to 8 cm long which, change from green to an eye-catching orangey-red at maturity. 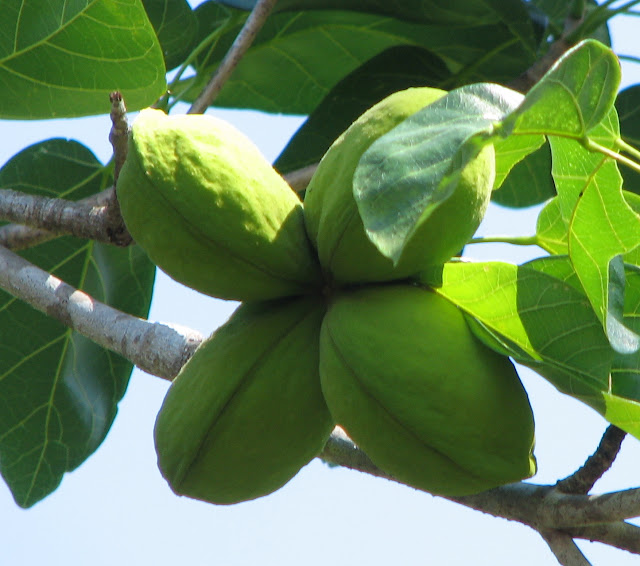 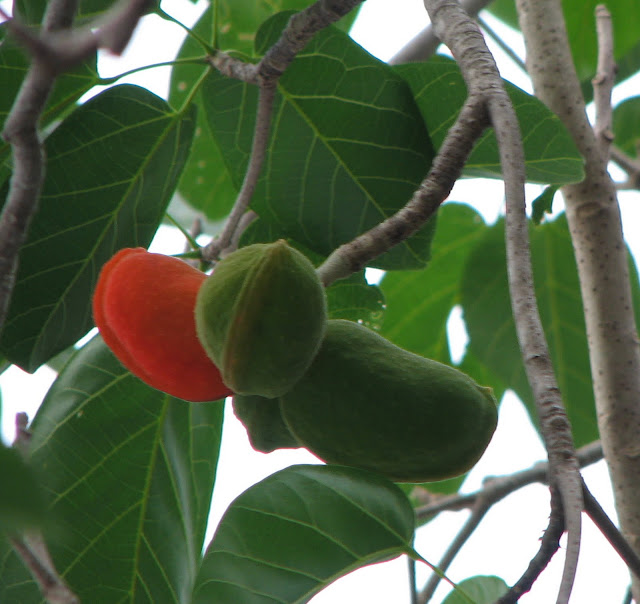 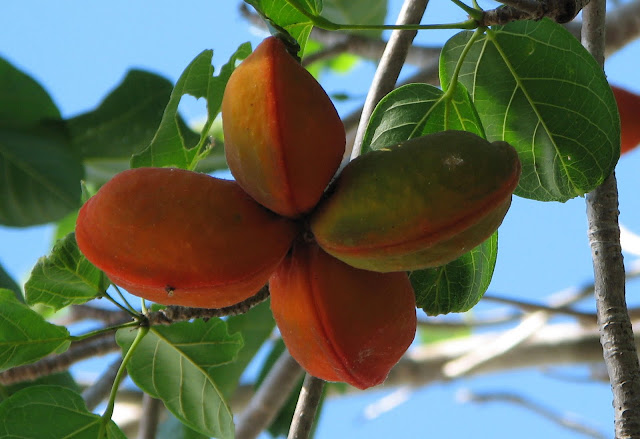 At this stage it splits open to reveal black seeds about the size of a peanut. The seeds are edible and are supposed to taste like peanuts ... never tried them myself! ... but for those who do wish to try them, it's recommended that the seed coat or testa should be removed first.  Birds, on the other hand, enjoy them 'au natural'! 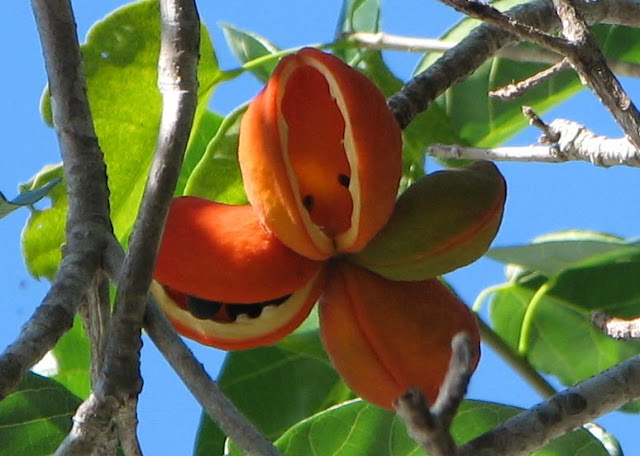 Seeds:
The edible seed is called ‘egng edndan’ in Uw Oykangand and Uw Olkola; ‘mayi pinta’ in Pakanh – which are the traditional languages of the Aboriginal people in central Cape York Peninsula. Their colloquial name for this tree is ‘Monkeynut Tree’. 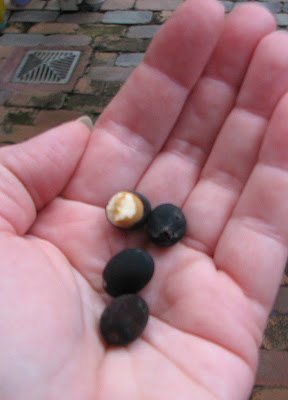 The pods stay open for quite some time – looking a bit like a flower and then they drop off, littering the pavers in the Courtyard Garden and making a bit of a mess! 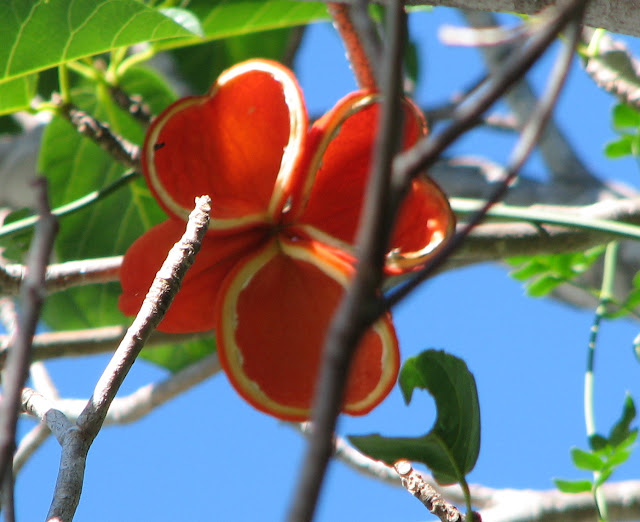 This tree, despite being quite messy during the Autumn/early Winter, is a valuable shade tree during Summer ... when it provides lots of cover over the courtyard area ... and then during Winter, when it's deciduous, it allows lots of light onto the courtyard garden for the winter and spring flowering annuals.
Posted by BernieH at 11:13 PM