As it's mid-Winter downunder, I thought I would share two great native northern Oz trees that flower at this time of the year.

In Australia there are two true native Kapoks. There is our local species and the one which is very common in Kakadu National Park, called Cochlospermum fraseri, which looks almost identical except for the leaf shape.

Every winter I am always impressed by the brilliant splashes of golden yellow which our local native Kapok Tree gives to the otherwise drab hillsides around my place.  Cochlospermum gillivraei is  a common sight not only on the rocky slopes here, but also in the vine thicket gullies on the outskirts of my city and they're commonly used in footpath and park plantings in our suburbs. 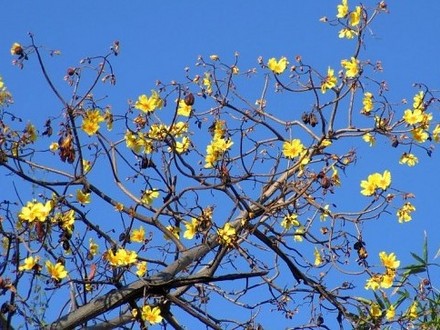 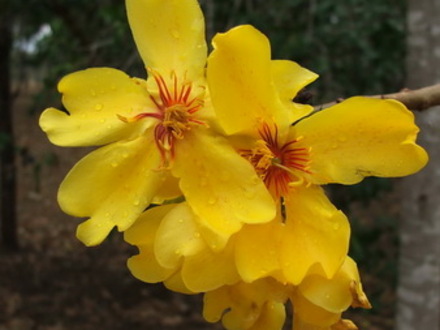 Our native Kapok loses all its leaves before flowering, which makes the flowering more obvious. The large golden yellow flowers have these beautiful contrasting stamens in the centre.

The flowers themselves are edible and are supposedly quite pleasant, according to indigenous locals. The blooms have been compared to marshmallows!! Although more than 90% water, they are surprisingly high in Vitamin C! The tap root of young Kapok plants is also edible when roasted. 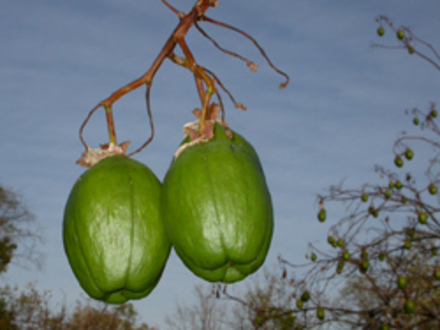 After the yellow flowers are pollinated, large, globular, green, papery fruit develop, which eventually turn brown and split along the seams to reveal two contrasting layers.  This fruit will then release numerous seeds covered by long hairs. The small black seeds are woven in a dense mat of fine silky hairs. This material is known as ‘kapok’. 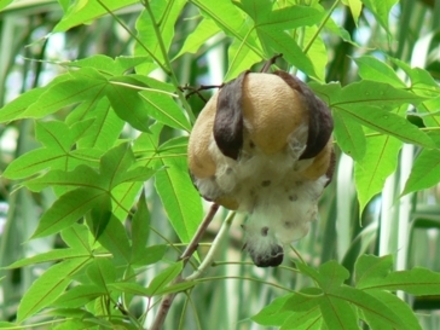 Well that was the first great native winter bloomer ... now for another.

Meet our native Silk Cotton Tree with its flamboyant scarlet blooms.  This tree is also sometimes known as Red Kapok.  Bombax ceiba leiocarpum, is a type of native cotton tree that is found here in northern Australia. It grows along the northern rivers and streams in the bush and also in coastal vine thickets around the sand dunes near the coast. 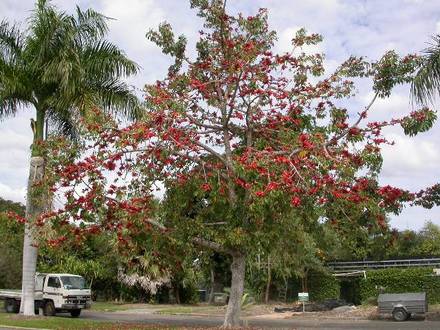 It can also be found in many gardens as well as in our local parks and green areas.  I'm lucky enough to have a neighbour who has a magnificent old specimen outside their property. 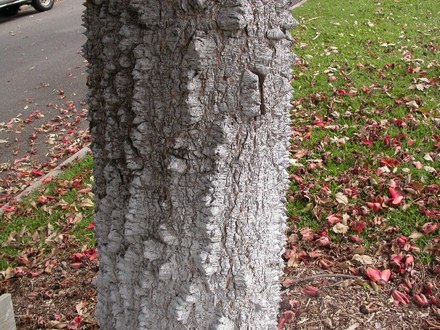 This tree has a thorny trunk and after shedding its leaves in the dry season, large waxy bright red flowers emerge. These are around 10 cms across and they hang singly or in small clusters at the end of the branches. These flowers are fragrant and in days gone by, the blooms were collected once they had fallen and were used as table decoration. 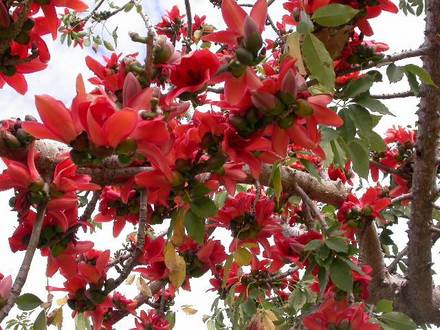 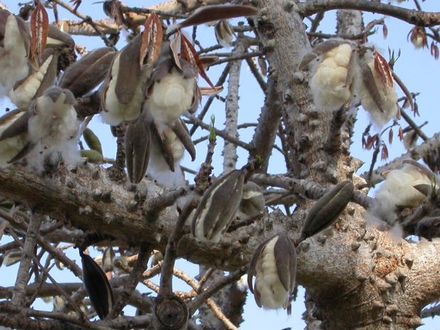 The bombax fruit is a large, oblong woody capsule that splits when ripe. This allows the seeds to float out in their woolly coats.

The taproot is edible and is an example of Australian indigenous food.  Apparently, the fleshy roots of young Bombax trees can be roasted and eaten like carrots.

Hope you enjoyed this introduction to two of my favourite winter blooming native trees. They provide quite spectacular colour in the middle of our long ‘dry’ season.
Posted by BernieH at 8:22 PM

bernieh's latest photos on Grows on You, where garden ideas are shared.