It's been quite a while between posts now, but at last I've got the chance to catch up with my Garden Journal.  I'm going to take a look back over the Spring months to make sure I'm up to date with these journal entries.

Spring begins in September here in Australia, and we're now just a week away from the official beginning of our Summer.  Most of our Springtime this year was very, very pleasant I have to say.  Throughout September and October, we had very comfortable daytime temperatures.  The mercury stayed around 27-29 deg C (80 - 84 F).  But from the beginning of November, it has climbed.  During this last Spring month we've had daytime temps. of 30-32 C  (86 - 89 F).  That 30 deg C mark is a defining marker for us.  Lower, it's comfy ... but over it starts getting decidedly hot and steamy.  The humidity levels have been climbing during November as well, with the levels are up around 70-80% most days.

Of course, Spring is also towards the end of our dry season.  There was no rain recorded from September to around mid-November.  Then there were about five days when we received little droplets from the cloudy overcast skies above, but the total was only 7.4 mm or 0.3 or an inch.  Hardly touched the ground!  So we haven't had any really decent rainfall since March, which makes this year's dry around eight months long so far. 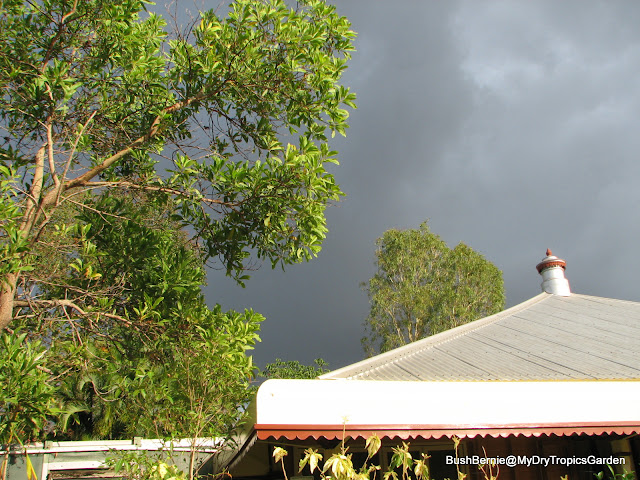 Just over the last few weeks though, we have been experiencing what we call 'build-up' - that time of year just before the wet season arrives. 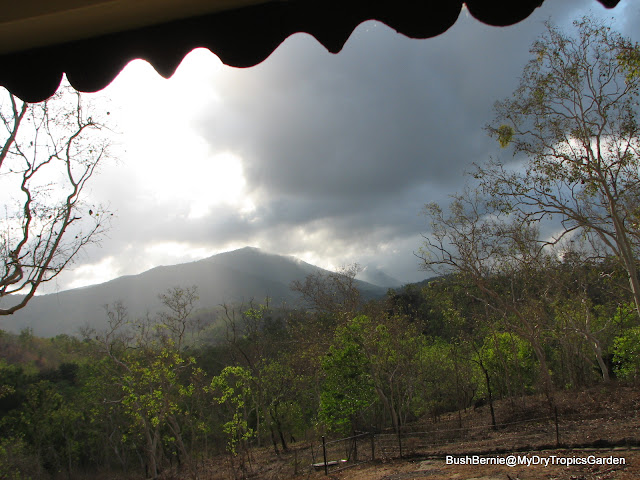 We see dark clouds hovering in the sky.  We may even hear thunder far off in the distance, and we occasionally see some lightning flash across the evening sky.  There might be a sprinkle or two of rain.  It's a promise of what's to come. 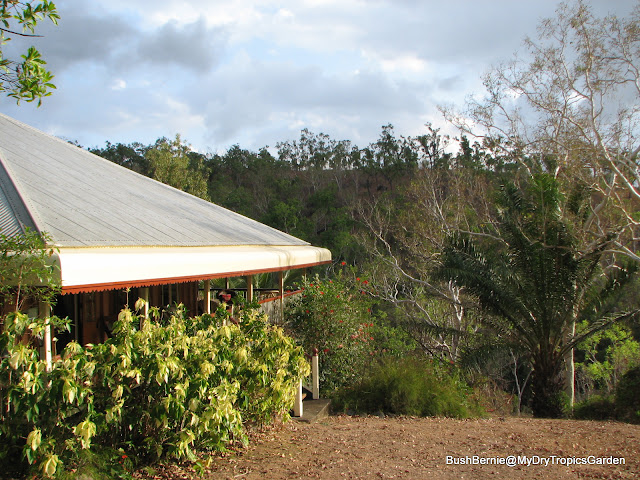 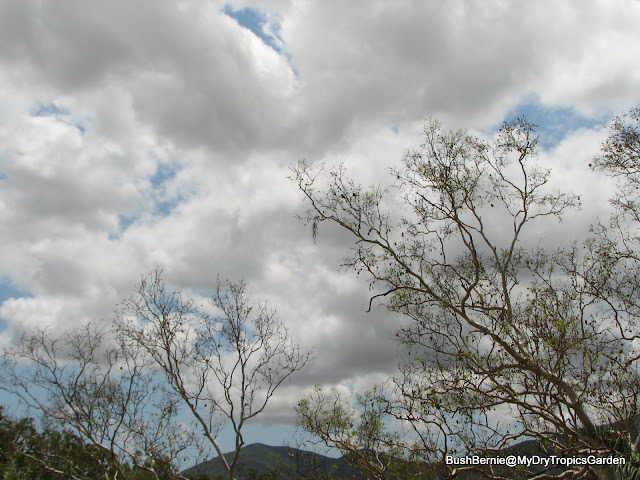 The trees in the surrounding bushland look mostly bare and undressed as they have dropped most of their leaves in an effort to get through the dry season. There is some new Spring growth here and there, but full leaf cover will not happen until the rains arrive.

Now let's look back at what was blooming over the Spring. 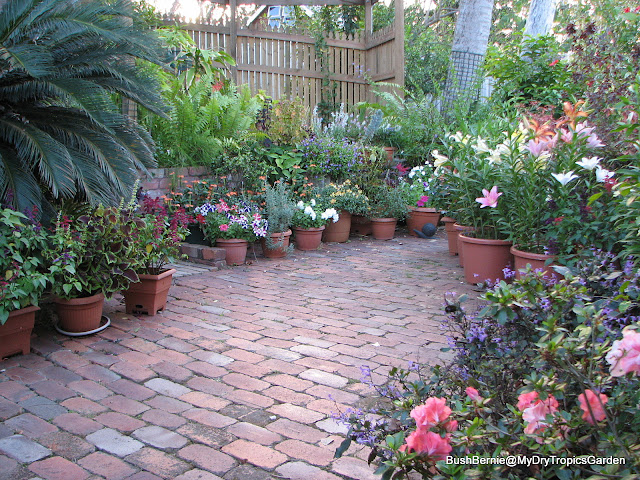 The courtyard garden was awash with colour throughout Spring ... 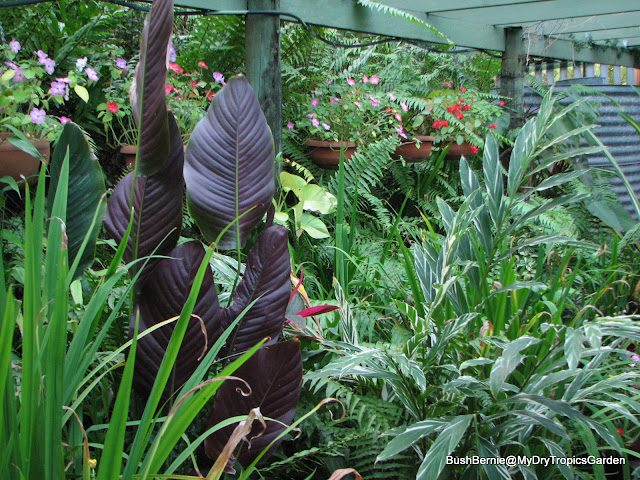 ... and the shadehouse garden was filled with fabulous foliage and flowers as well. 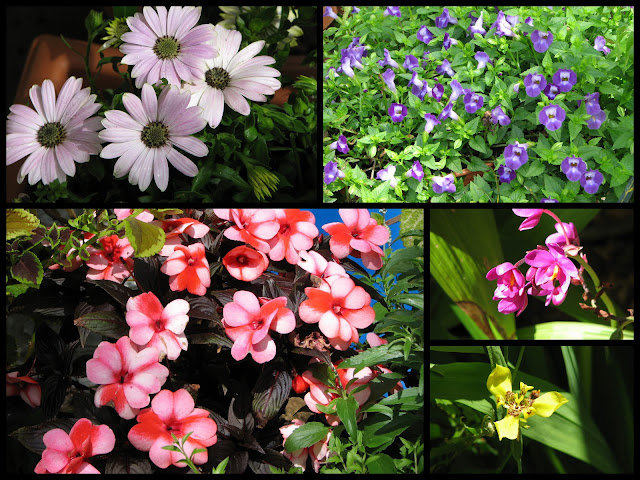 Osteospermums, Torenias and Impatiens were all blooming in their pots out in the courtyard.  The Spathoglottis plicata or Ground Orchids, and the Neomarica longifolia or Yellow Walking Iris had started another blooming cycle. 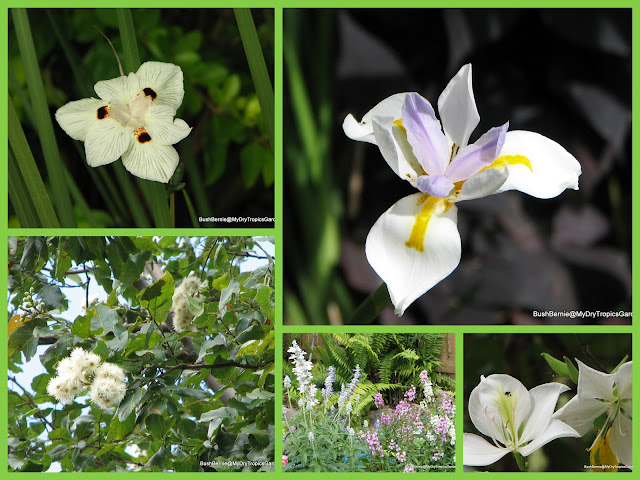 The Dietes bicolor and Dietes grandiflora had also started another blooming cycle for the year.  The Corymbia torellianas or Cadaghi Gums had started flowering, as had the white Bauhinia variegata.  The various Salvias and Angelonias were all in bloom around the garden. 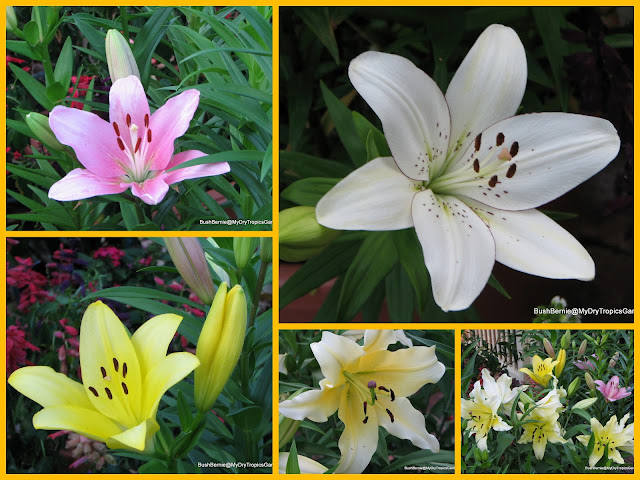 The first of the Lilies had opened.  These included Asiatics, Orientals and the L.A. hybrid 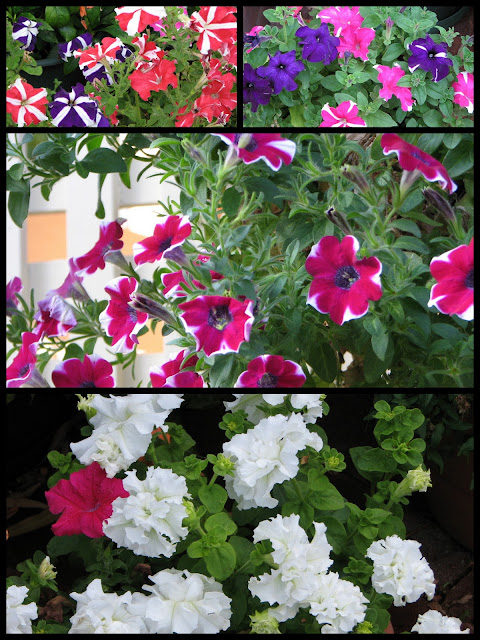 My favourites, the Petunias really started putting on a great show in early September and have continued ever since, with the occasional trim back and lots of deadheading. 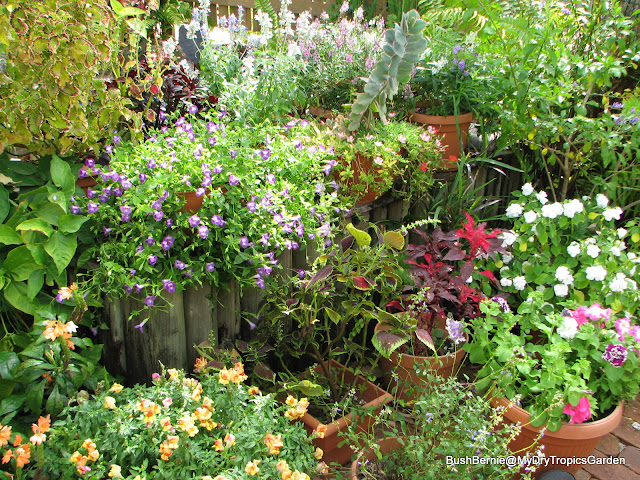 ... the flower and foliage show out in the pond corner of my courtyard garden was in full swing.  All these plants have continued their great performance since ... and I expect that to continue for a few more weeks yet.   I will have to move some of the potted plants into shadier positions soon though, especially things like the double white Impatiens walleriana and the Salvia glechomifolia.  They won't like being out in the full summer sun. 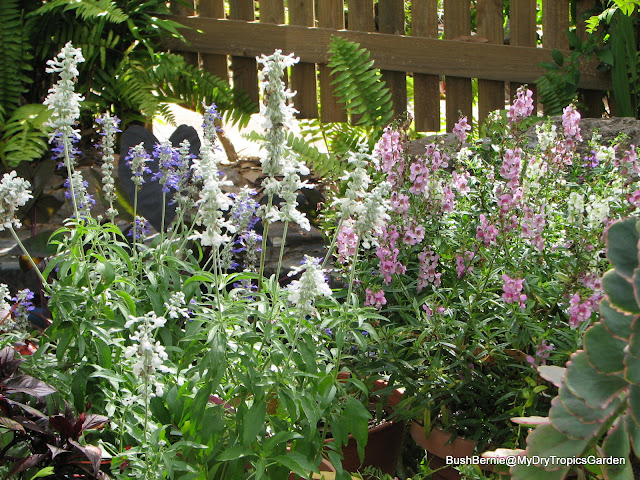 The other Salvias and the Angelonias seem to thrive in full sun positions and carry on with little attention, other than regular watering in the early morning. 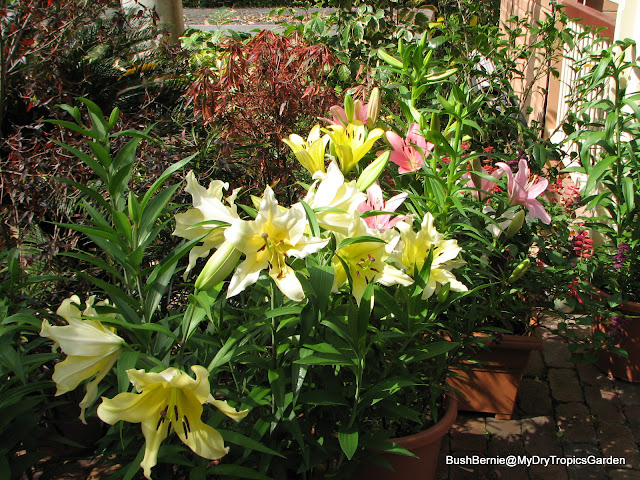 All through October, the Lilies put on a fabulous display ... 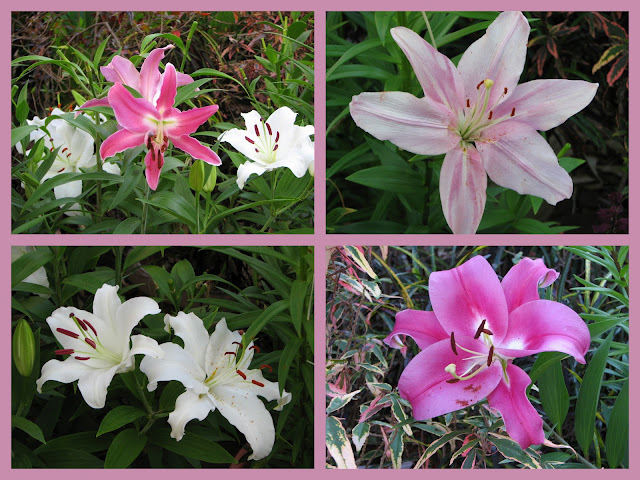 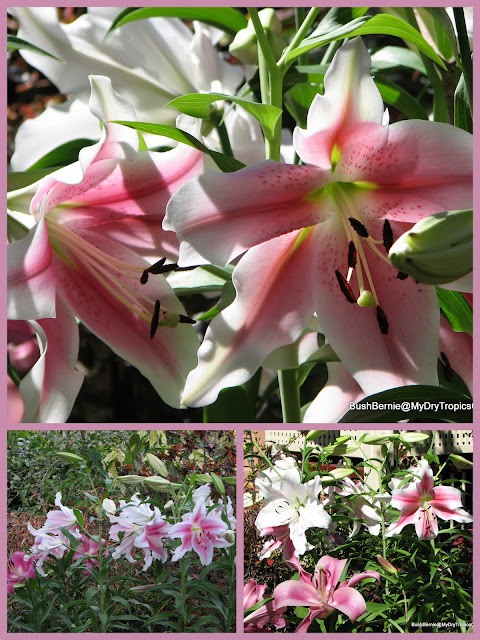 ... and the Orientals and Olde World Lilies, in particular, added a beautiful fragrance to the courtyard. 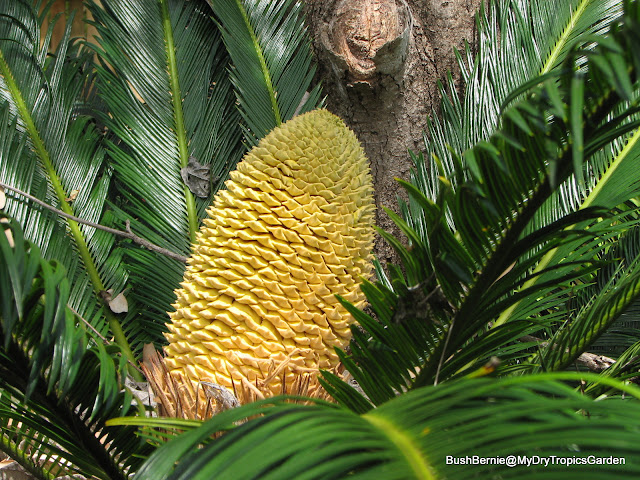 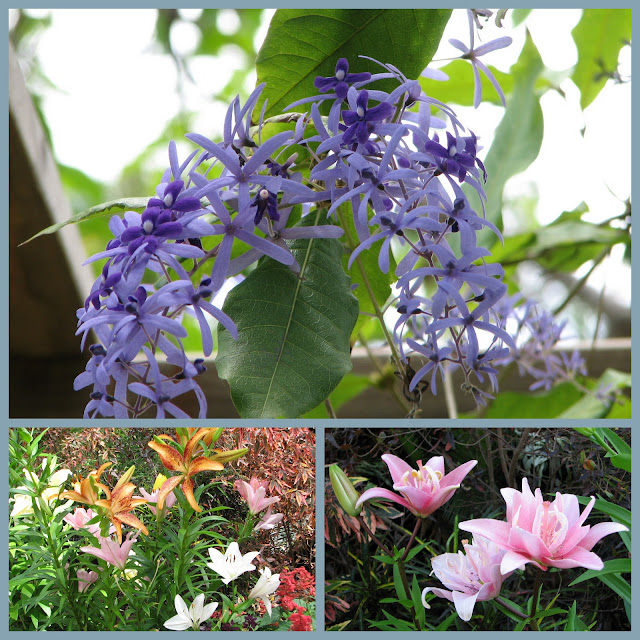 The Petrea volubilis threw out its first flower sprays since being cut back drastically after cyclone Yasi at the beginning of last year.  The Lilies continued showing off, and my first ever double Asiatic Lily flowers appeared. 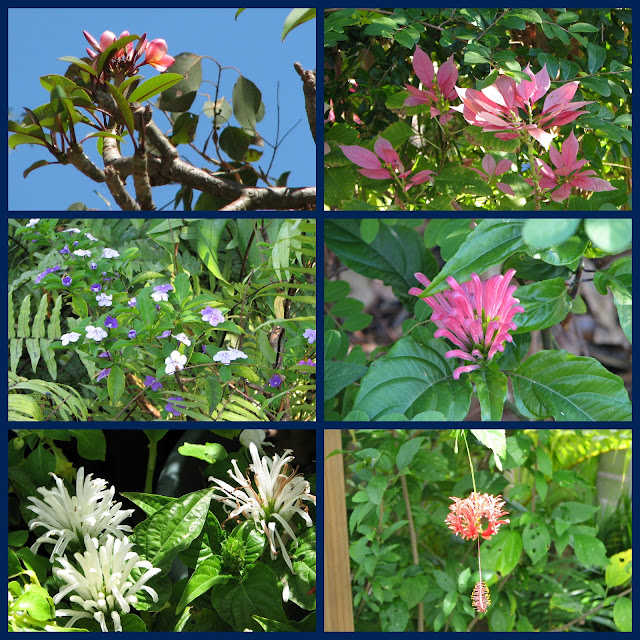 October also saw the Plumeria rubra throwing out more flower sprays, while the Euphorbia pulcherrima was coming to the end of its blooming cycle.  The Brunfelsia was in fine form with its three different coloured flowers all blooming at the same time.  The pink and white Jacobinia carneas were blooming again, and the Hibiscus schizopetalus shrubs were finally fully recovered from their ordeal last year and were now back into their all-year round flowering cycle.  It was absolutely wonderful seeing the unusual lantern-shaped Hibiscus flowers back for all to see every single day. 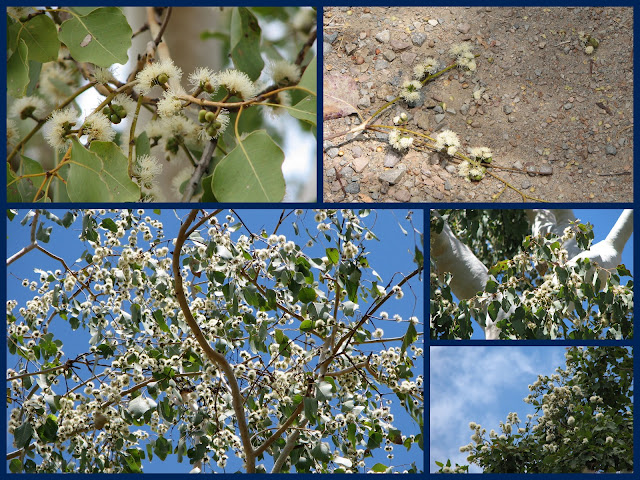 The Eucalyptus platyphyllas or Poplar Gums, both on the property and in the surrounding bushland, all took their turn to break into full bloom, and the sweet honey perfume wafting from those puffy flowers filled the air day and night. 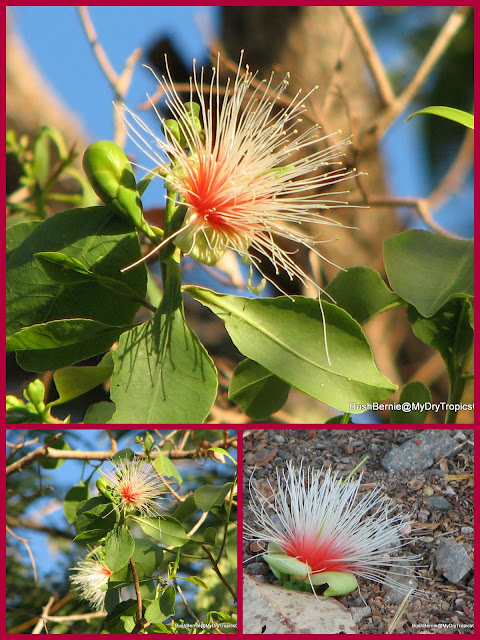 It was also time for our native Planchonia careya or Cocky Apple trees to bloom. 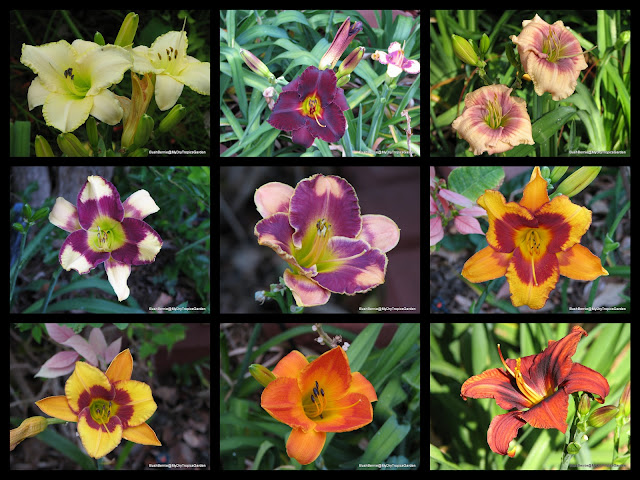 ... most of the Hemerocallis on show in the far corner of the tiered garden beds. 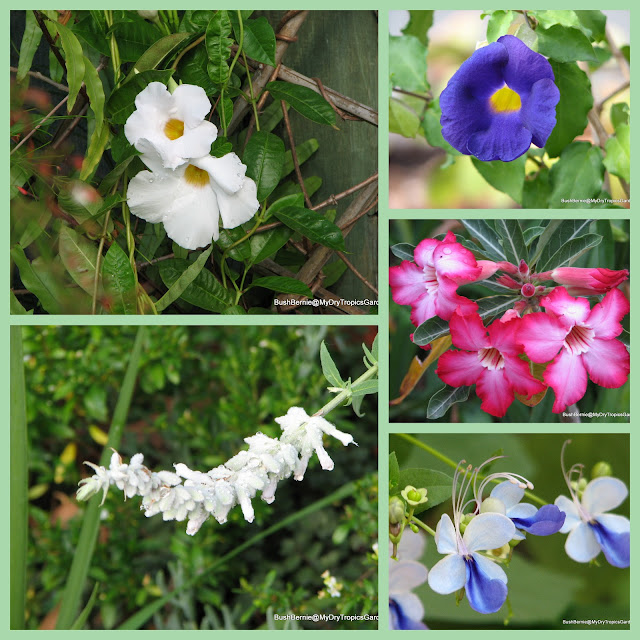 The Mandevilla 'White Fantasy' broke into bloom again, as did the white Salvia, the purple Thunbergia erecta 'Tru Blu', the Adenium obesum and the beautiful Clerodendrum ugandense or Blue Butterfly Bush. 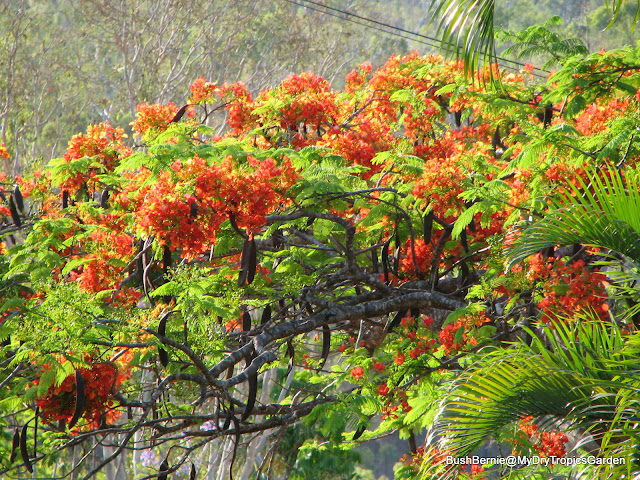 It was also time for the Delonix regias or Poincianas to start blooming.  The tree canopy will be covered in bright red flowers for many, many weeks  to come.

Springtime is really the beginning of downtime in respect to gardening jobs for me.  I don't plant during Spring, as that's when our dry season is in full swing.  I really don't do much at all aside from regular watering of the potted plants and some of the garden beds, general tidying up and fertilizing and deadheading of the annuals.  As the summery conditions carry on, it becomes almost impossible to spend any time out in the garden, so I'm enjoying every moment right now.

I thought I'd finish this latest Garden Journal post with a video clip.  I managed to capture a beautiful Forest Kingfisher sitting in a tree yesterday, but the soundtrack to the video is our daily summertime soundtrack here next to the bush.  You won't be able to miss the loud cicada song in the background.  That's what we hear all around us pretty much all day and into the night throughout the coming summer.